If you were to ask me what Nintendo console had the strongest lineup of games, while instinct would initially push the SNES into the front of my mind, if I was being honest, it would undoubtedly be the Nintendo Switch. Not only does it have some of the strongest exclusive titles of the past 3 years, it’s also the home to some of the best ports of games from their Wii and Wii U era. There’s been no shortage of the past Nintendo library making it’s way over to the Switch but the latest entry, Xenoblade Chronicles: Definitive Edition feels so at home here. So much effort has gone into bringing this game over from the Wii into the current generation and it truly is the ‘Definitive’ way to play this classic JRPG. 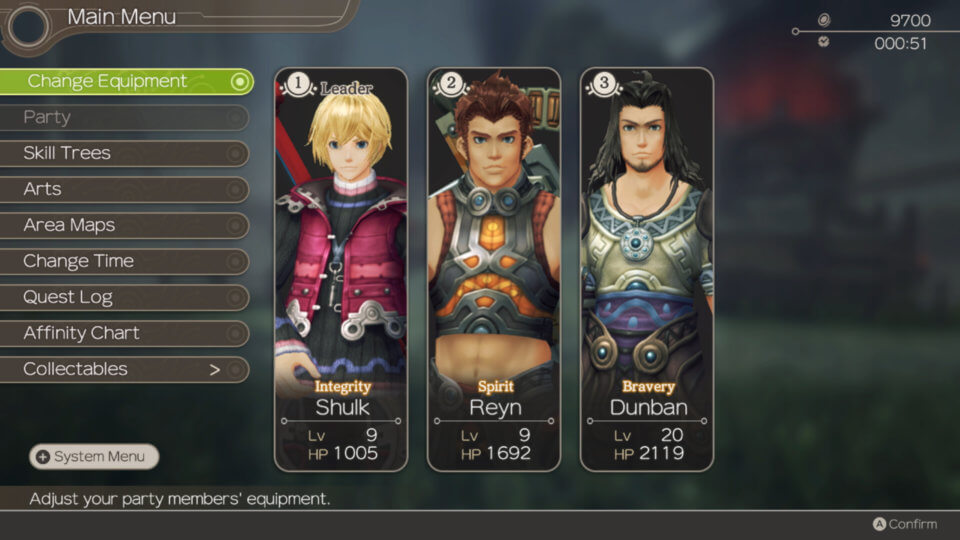 Xenoblade Chronicles: Definitive Edition is more than just an up-resed port of the original Wii game. They’ve completely remade the character models, now featuring a more anime-esque art direction, the environments look alive and vibrant and the game’s textures have been massively improved over the low-res grainy textures of the original that were even considered dated at the time of initial release 10 years ago.

New visuals are one thing, but one much appreciated change I loved in the Definitive Edition were it’s quality of life improvements that make the game much more enjoyable to play. Menu’s are much easier to read and manage, the user interface within combat has become a lot clearer, and while it doesn’t make combat easier, it does make it easier to understand what the icons do.

Xenoblade Chronicles is set eons after an epic battle between two titans, Mechonis and Bionis. Civilisation now resides upon the frozen corpses of the titans, with organic lifeforms living on Bionis and the game’s main antagonistic force, the Machina living on Mechonis. 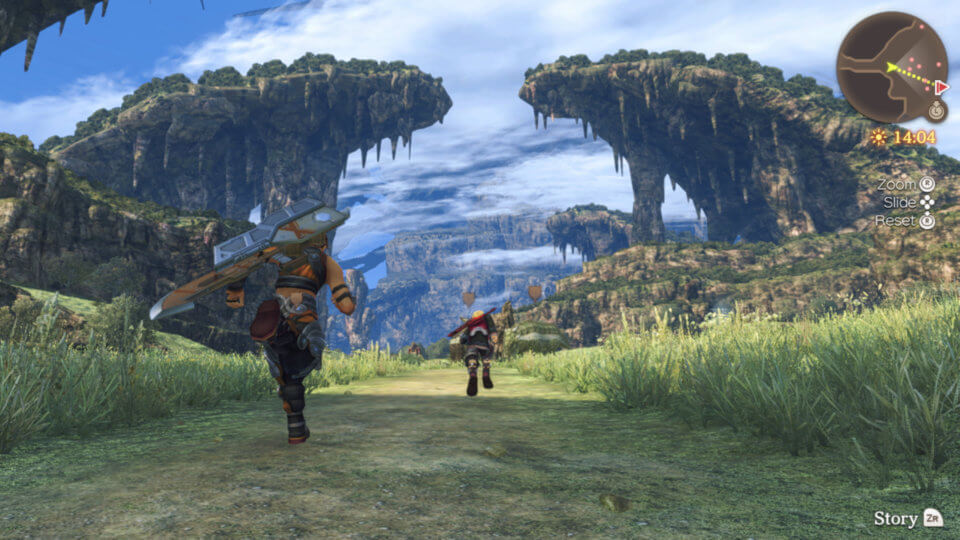 The main story follows a young boy named Shulk, an 18 year old scientist that resides on Bionis in an area known as Colony 9. We meet Shulk at the beginning of the game where he is studying a mysterious weapon known as the Monado. When Shulk’s home is suddenly attacked by the Machina, he discovers during the heat of battle that the Monado grants it’s wielder visions of the future. Following the attack, Shulk sets off on a quest based on revenge but filled with plenty of self discovery, great characters and deep development along the way.

As with many great JRPG’s, Xenoblade Chronicles is mostly as fantastic as it is because of it’s cast of characters and it’s overall story. Joining Shulk on his journey are a number of side party members that you’ll meet throughout your journey, who not only provide some great character moments, they also fit many of the standard archetypes you want to find in an RPG. There’s Reyn who is essentially the tank character, Sharla who’s specialty is ranged attacks and healing and Melia who acts as the party’s mage just to name a few. Sure the game is full of many overused JRPG tropes but it’s unique setting upon the titans and it’s deep, dense and beautiful world kept me constantly engaged and wanting to find out more.

Xenoblade Chronicles utilises a real time combat system. The combat is also somewhat automated as party members will auto-attack enemies within their range. You can freely manoeuvre the battlefield and the strategy side of combat emerges with the use of Arts, special abilities that can be used throughout battle that unleash more damaging attacks and effects. Knowing when to use these can be critical at times as both the Combat Arts and Talent Arts work on cool-downs or become available after landing a certain number of hits in the enemy, meaning you should try and utilise them at the best possible times and try to manage them so that they’re available to be used when and if needed. 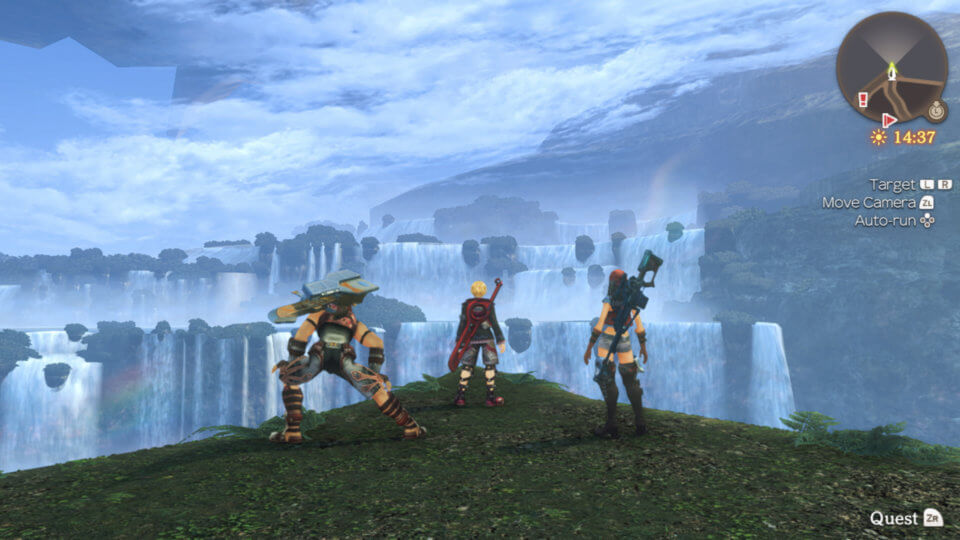 The game’s Vision system allows you to see visions of the future within battle thanks to Shulk’s Monado. It grants you the ability to see the enemies’ future attack and target. Providing you a quick opportunity to get the upper hand and combat the upcoming move or make sure the other party member destined for the attack is able to defend or prevent it from occurring. I really liked the uniqueness of this system and how cleverly it incorporated the story behind the Monado directly into gameplay so that we the players could also use it’s special ability to see the future and plan for it much like Shulk can.

Another great system that separates. Xenoblade Chronicles from many other JRPG’s is the inclusion of its Affinity system. This system tracks the relationships between party characters and logs the status of how other NPCs and villages view you. Completing side quests for these NPCs will increase your affinity with them and can even make additional story moments available. Completing ‘heart to heart’ moments will also allow you to increase affinity with other party members and can affect how they perform together as a team within combat.

If you’re an existing fan of Xenoblade Chronicles, I’m glad to tell you that Definitive Edition does include some brand new content you’ve never played before too. There is a brand new story mode called Future Connected which is available to you right from the start of the game if you wish to check out the new content first rather than after the lengthy main game. Future Connected is a new epilogue story set one year after the events of the main game and focuses on Shulk and Meila as they explore a brand new area that wasn’t accessible in the original game, Bionis’ Shoulder. This experience lasts around 10 or so hours and while it doesn’t add anything groundbreaking to the overall experience, it is certainly a nice cap on top of an already fantastic game. 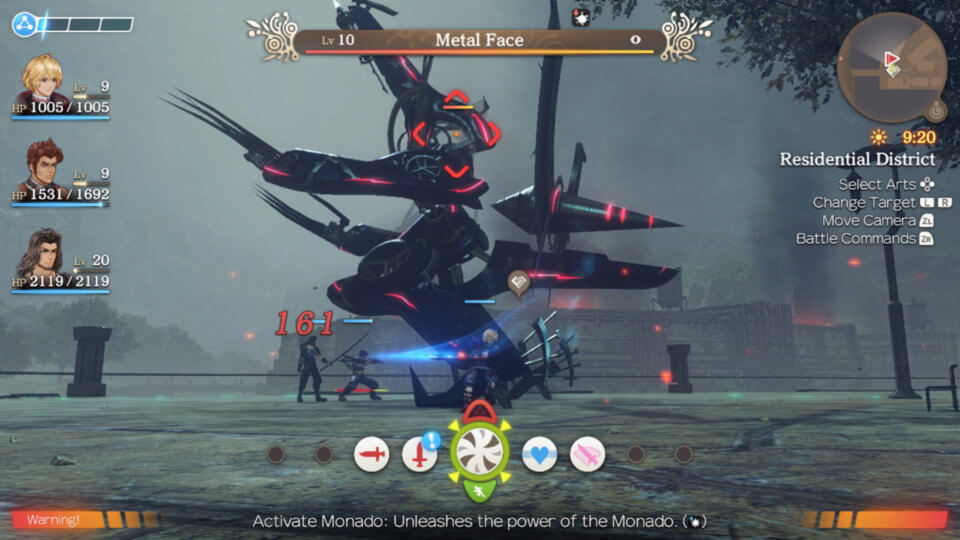 Xenoblade Chronicles: Definitive Edition definitely provides value for money. The main story alone will take around 70 hours to complete, but there’s easily over 100 hours of gameplay on offer here for those players that want to spend more time completing the many side quests, building character affinities and of course completing the new Future Connected epilogue. I can’t commend the effort Monolith Soft have put into this release of the game. Not only has it been graphically overhauled and had it’s soundtrack remastered, it’s packed full of quality of life improvements that make it such a joy to play and also comes life’s with a brand new epilogue story, making sure even long time veterans of the game have something brand new to jump into and enjoy.