There are a number of video franchises that due to being around for decades or due to proving their quality or story telling abilities, generate instant excitement. The Wolfenstein series fits this bill on both accounts. It’s a very cross generational series, with it starting it’s run in the early 80’s and rising in popularity with 1992’s Wolfenstein 3D. The series was then rebooted with Wolfenstein: The New Order back in 2014 and has seen a new generation of loyal fans as well as a lot of success for the series and Machine Games as developers. Now Machine Games have come together with Arkane, another Zenimax owned studio to create a spin-off title within their Wolfenstein universe. Implementing a lot of changes to the core formula of the game, new protagonists and designed it as a cooperative, partnered experience. But in doing so, they may have changed too much and watered down what made the last few Wolfenstein games so great. 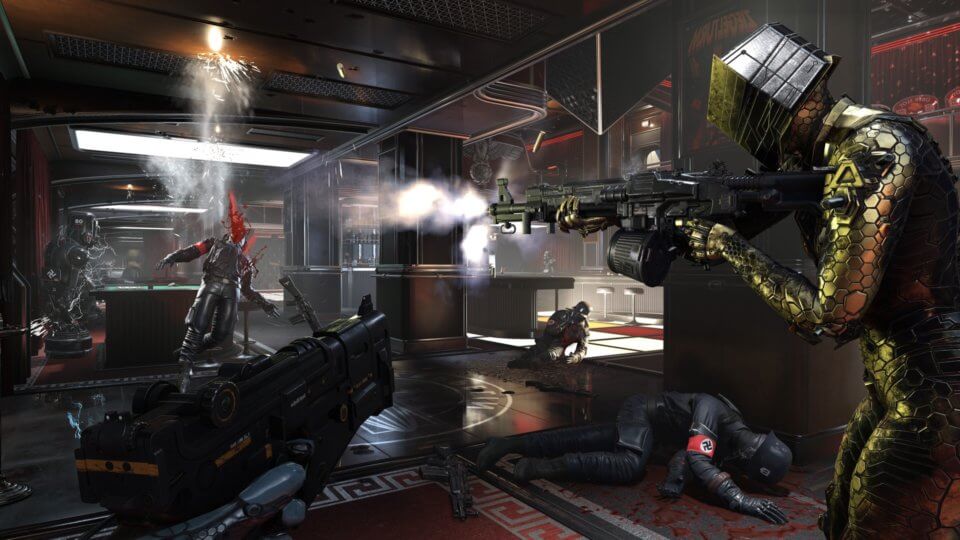 Wolfenstein: Youngblood takes place 20 years after the end of Wolfenstein 2: The New Colossus. BJ and Anya have raised twin daughters Jessica and Sophia and made them competent in combat. What great teachers to have right? Though, now in 1980, BJ Blazkowicz has suddenly gone missing, the only trace of where he may be lies inside a hidden map within the attic, hinting the BJ may have set off to Neu-Paris to join the French Resistance. So Jess and Sophia pack up some weapons, strap on power armour and head off to find their dad.

Where Machine Game’s previous entries in the series have been single player, story driven and fairly narrative experiences. They’ve decided to change things up quite drastically here with Youngblood. Youngblood doesn’t follow the traditional mission based structure of the past and instead grants you a hub world within Neu-Paris along with a number of zones that can be travelled to to undertake missions. It would be incorrect to classify it as an open world game, but each of the zones consist of a fairly open area that can be explored and things don’t play out in a confined linear fashion at all. 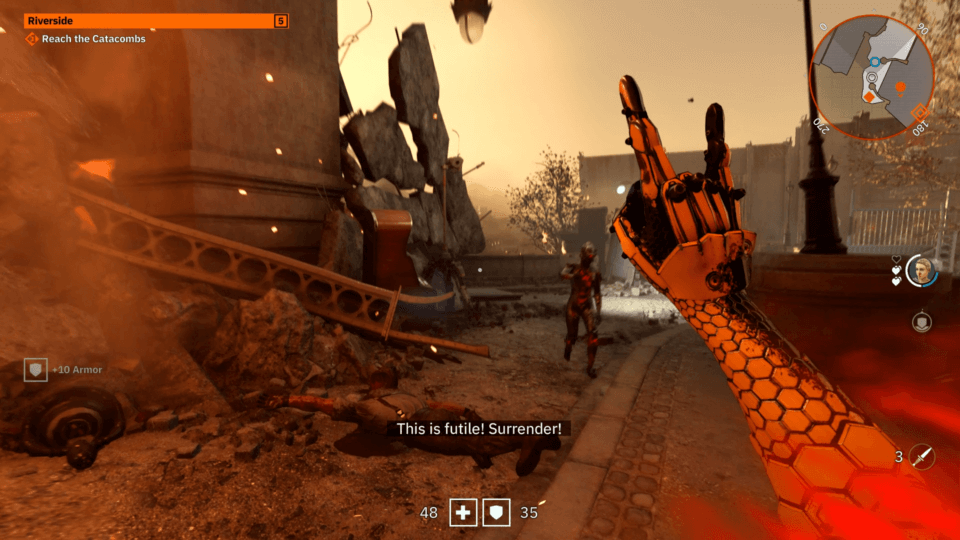 I was impressed with Youngblood’s level design. After seeing how the areas of Neu-Paris looked and played, it seems this could be why Arkane was brought on board to assist. The set-pieces are detailed and have a nice mix of verticality in them and encourage you to cleverly use your skills to get about. Something Arkane showed they could do really well when they developed Dishonored 2.

The next biggest changeup comes in the form of Youngblood’s Co-op system. As the journey is all about the two children of BJ on a rescue mission it makes total sense to allow 2 friends to play through the experience together. I found the co-op system to be a fun addition and it works thanks to the game being designed as a journey of two people.

You will take the role of either Jess or Soph and you can have the other sister controlled by a friend, another online player or play completely offline with the AI controlling your partner. It works seamlessly and supports jump-in/jump-out play. Best of all, you can invite a friend in to play with you even if they don’t own the game thanks to Wolfenstein: Youngblood’s Buddy Pass. 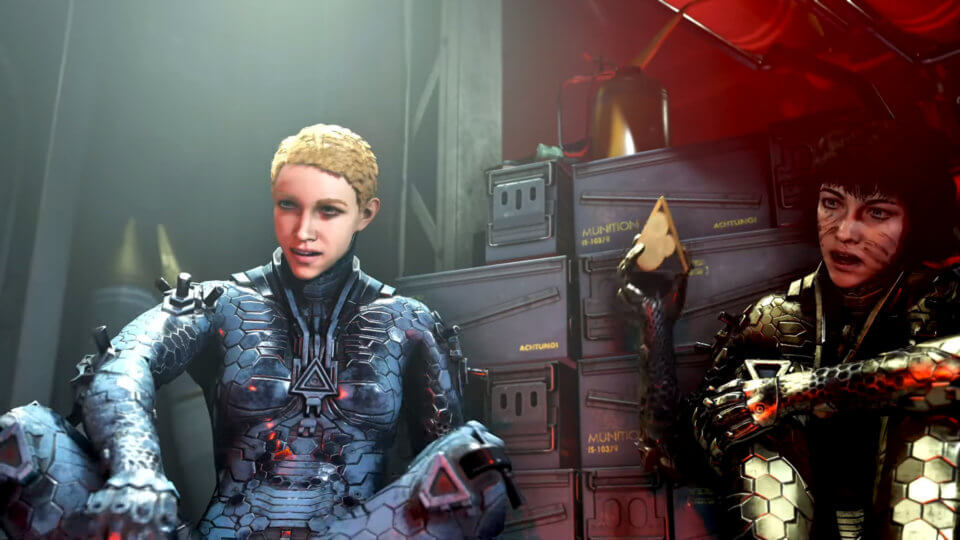 Machine Games has also chosen to implement an RPG-like progression system this time around as well. Past Wolfenstein games have allowed you to upgrade personal skills and abilities, but now both yourself and the enemies have levels, health and xp gauges. But due to the limited amount of story on offer with Youngblood, the system acts more like a gate-keeping and padding mechanic than one built around genuine fun and progression.

Youngblood’s levelling system rather than encouraging progression seems to be implemented more to block you off from accessing areas the game doesn’t want you to get to yet, throwing enemies at you that can seemingly absorb clip after clip of ammo before knocking you down like a fly. These were almost always frustrating encounters, and if you do manage to take down an enemy of a higher level, the payoff was usually minimal or non-existent. Wasting a lot of time and ammunition and gaining next to nothing isn’t fun. And after having an incredibly enjoyable time with New Colossus in 2017, it was quite disappointing to see that they chose to change up the core formula and gameplay of the game so much.

Some main missions in the game also force you to grind out a few side-quests (some of which are genuinely fun but many of them feel like generic video game side quests) just to be specced up enough to take on the enemies faced in the mission. This once again slows down the pace of story progression, which is something I’ve come to expect to be a highlight in a Machine Games Wolfenstein game. 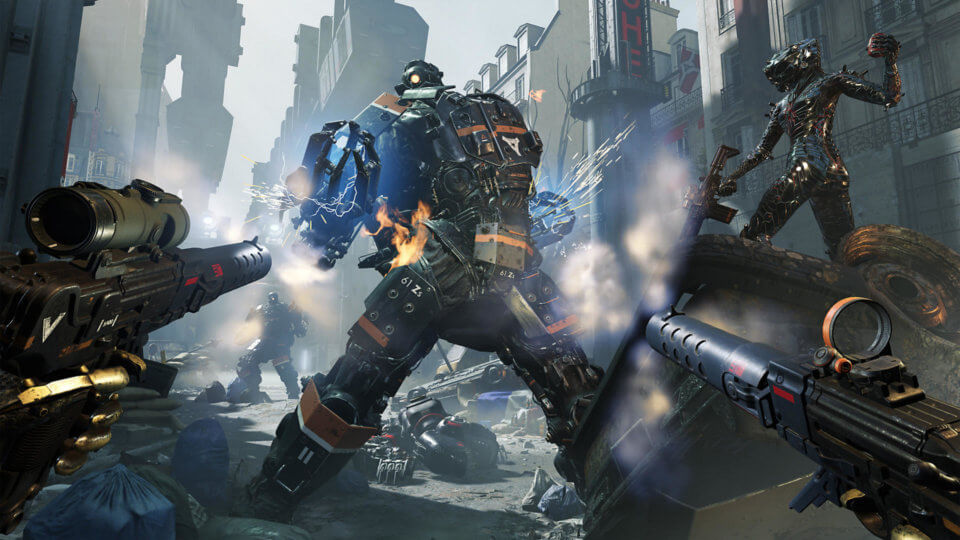 But there is a silver lining to completing a grind, earning some XP and levelling up. It allows you to unlock new perks and skills for your character and customisation options for your weapons. You’re able to level up your Mind, Muscle and Power abilities as you earn enough xp to unlock the skills. Granting you perks such as longer cloaking times, carry more ammo, increased health or armour, shorter cool-down times on abilities and much more.

As mentioned, guns can also be upgraded too, allowing you the ability to change things like the sights, muzzle, magazine and stock on your favourite weapons, as well as apply one of the many weapon skins available. I really liked this aspect of Youngblood, as it not only gave me some reason to keep grinding away at the game in return for improving my weapon, it has the ability to drastically change the look and damaging ability of your arsenal.

Both of these systems gave noticeable change to your characters and enhances the fun factor, as Youngblood’s highlight continues to be smooth yet solid gunplay and implementing unique ways to take down Nazi’s using the customised weapons that the series is known for.

Unfortunately, as good as the gunplay, level design and upgrade abilities are, I still came away feeling that Youngblood just doesn’t match the quality standard set by Machine Game’s previous entries in the Wolfenstein series. The cast of characters weren’t as interesting or well written as those in New Colossus, with many of the characters outside of Jess, Sophia and Abby falling back to pretty much just being quest givers or used for exposition. Choosing to artificially pad out the progress and increase the difficulty curve at times using an RPG based levelling system was a big letdown after I thought the pacing, difficulty and story of The New Colossus was one of the best we’d seen in a first person shooter in years. 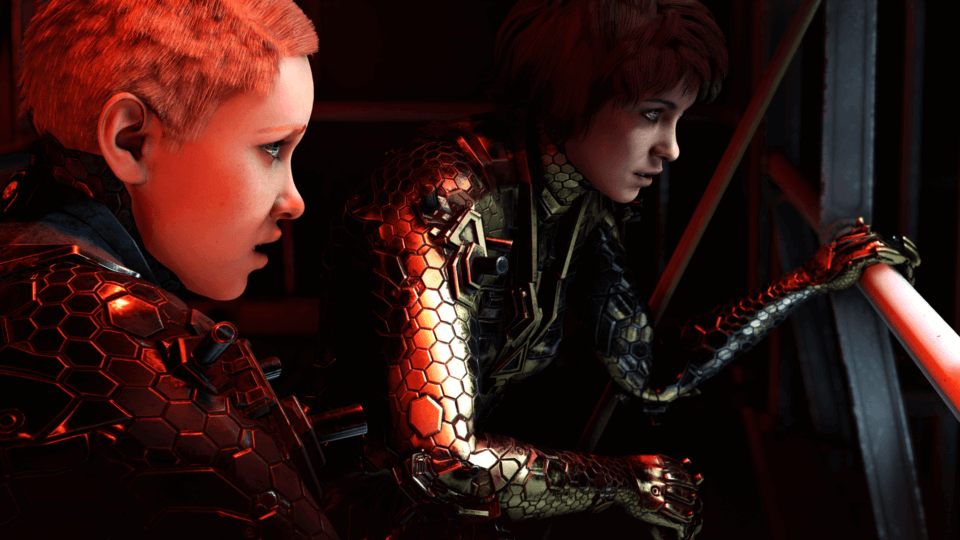 While I can appreciate that Machine Games may have wanted to push the envelope and try something new with a series they’ve been hard at work on for years, I think they may have pushed the boat a little too far all at once. This is a very different Wolfenstein experience, and while it’s not bad, it’s certainly not what I’d expected from them based on the history of the series and the pre-release previews of the game. I’m still very much interested in seeing where they take the Wolfenstein franchise from here though.