When it comes to video games based on licensed properties it’s often quite hit and miss when it comes to quality. While certainly not a perfect game, The Seven Deadly Sins: Knights of Britannia is definitely on the higher end of the quality scale. It’s a fun action-fighting game that kept me engaged and coming back to unlock more characters and complete the side quests to power them up.

The Seven Deadly Sins: Knights of Britannia is an action-fighter game developed by Bandai Namco Games and is based on the hit manga and anime series The Seven Deadly Sins. The game features 2 main modes that you can access from the main menu. There’s the adventure mode, which lets you play through the events and battles of the first season of the anime, this is likely where you’re going to spend most of your time, at least initially and Duel mode, a versus mode that can be played against a computer player, local player or an online competitor. 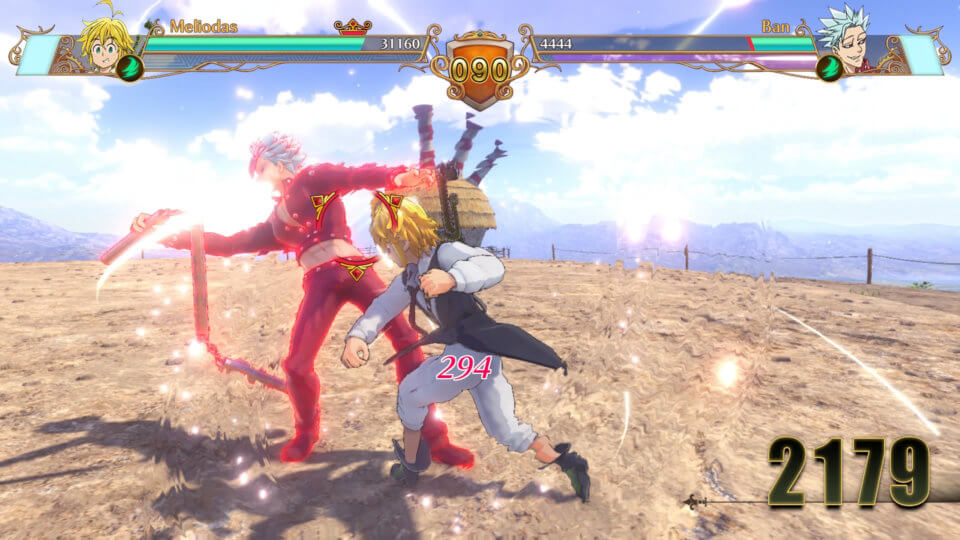 One thing I loved about the duel mode is that it only lets you play as the characters you have unlocked via playing the adventure mode. Far too many fighting games of recent years have the whole roster accessible in versus mode taking away that sense of accomplishment I used to get from having to work at unlocking my favourite characters. I also loved that characters you’ve leveled up and added custom skills to in Adventure mode retain those same skills in Duel mode which means if I play online against a person using the same character I’m using they are able to have their own loadout for that character that suits their play-style, keeping you always on your toes. 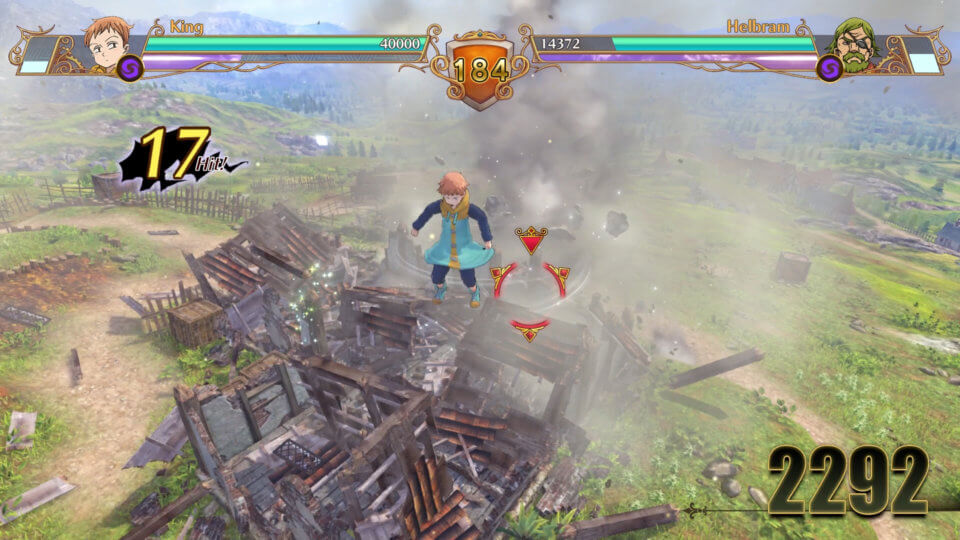 If you’re a fan of the anime series the overall plot of Adventure mode will be fairly familiar to you. It’s main quests follow the story of the 24 episodes of the first season but with some additional original side stories and battles added to add some interesting new story threads.

There are over 100 quests to complete in the Adventure mode. 30 or so of them are classified as the main quests and the others are made up of the side quests I just mentioned, Trial quests, which give you a pre selected character and have you take on a hoard of soldiers or black hounds in a Dynasty Warriors style battle where you need to eliminate the hoard before the time runs out and Errand quests, a quest type where you play as Elizabeth and traverse a battlefield collecting items while using Hawk to keep the enemy soldiers at bay. These varied mission types kept things from getting too stale although there are many of the Trials that are essentially copies of each other that include a different amount of enemies in the hoard and harder difficulty level. 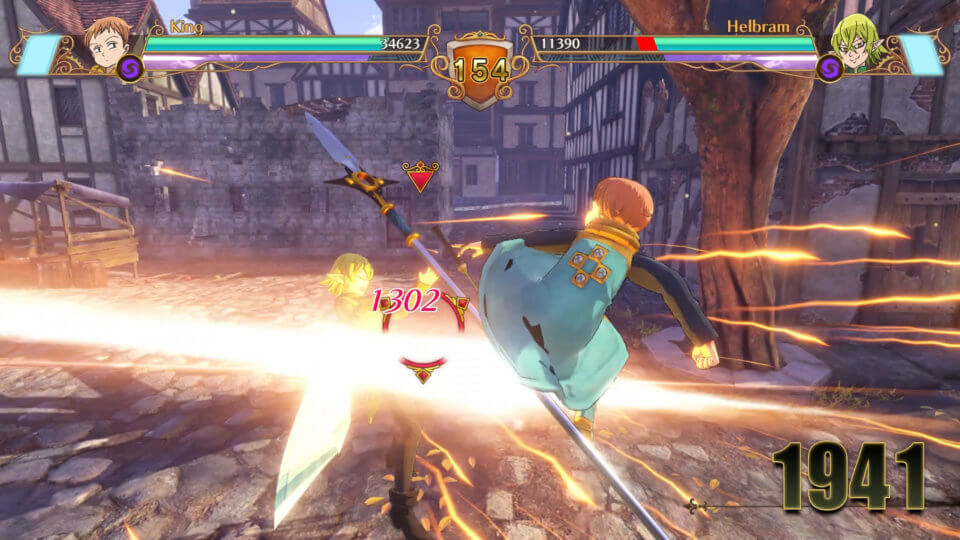 Upon completing a quest the people in the town you’re currently set up in begin to talk and reveal intel, after filling the gossip meter enough additional side quests and the next main quest or city become available. At the quest’s end you also receive crystals and the selected mission reward item that can be used back at the Boar Hat Inn to craft new items that can be attached to selected characters and act like runes that power up that characters strength or increase resistances. These power ups are what carry through to Duel mode, so all that time and effort spent unlocking the next rune doesn’t go to waste when you jump into online duels.

Commits A Few Sins Of It’s Own

Occasionally the thing you’re fighting with the most isn’t actually the enemy on the screen, it’s the game’s camera. It will occasionally position itself behind a wall blocking your view of the fight completely or be facing the opposite direction to the enemy you’re locked onto forcing your character to race forward and punch thin air rather than approaching the enemy. Now this doesn’t happen incredibly often but when it does it’s incredibly frustrating as when you can’t see your character for a number of seconds in a fighting game that is so action packed and fast paced it can be the difference between you winning or losing the match. 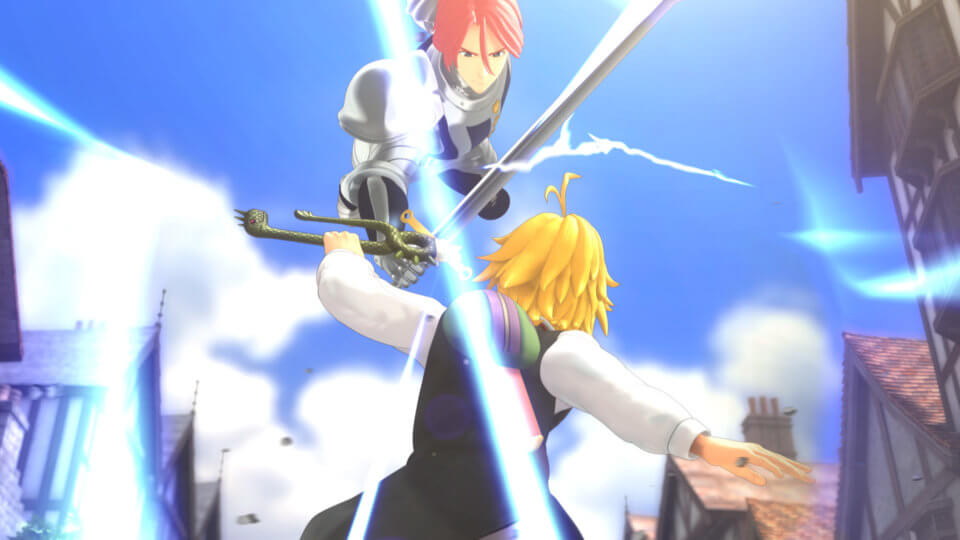 My next gripe I have with Knights of Britannia is the inconsistent visual quality of the game. The character models, cutscenes and the moments inside the Boar Hat look great. The cell shaded art style is vibrant and captures the tone of the anime series but some of the environments and battle stages have some textures that look like they are from an early PS3 game, and when they are side by side with your player character they stand out like a sore thumb.

It’s possible these issues may be fixed up in a post release patch as Bandai Namco have been very forthcoming about the amount of free post release content that will be added to the game. They will be adding new story missions going forward that will incorporate content from the second season of the anime, brand new characters to the roster that already contains 26 playable characters and adding in quests for the ’10 Commandment’ characters all for free as future updates.

Knights of Britannia is fully translated for it’s western release but the soundtrack has not been. All audio is in it’s original Japanese form. This is in no way an issue for me but thought it would be worth mentioning in the review in case there are fans expecting to hear the English voices for their favourite characters when they pick up the game. 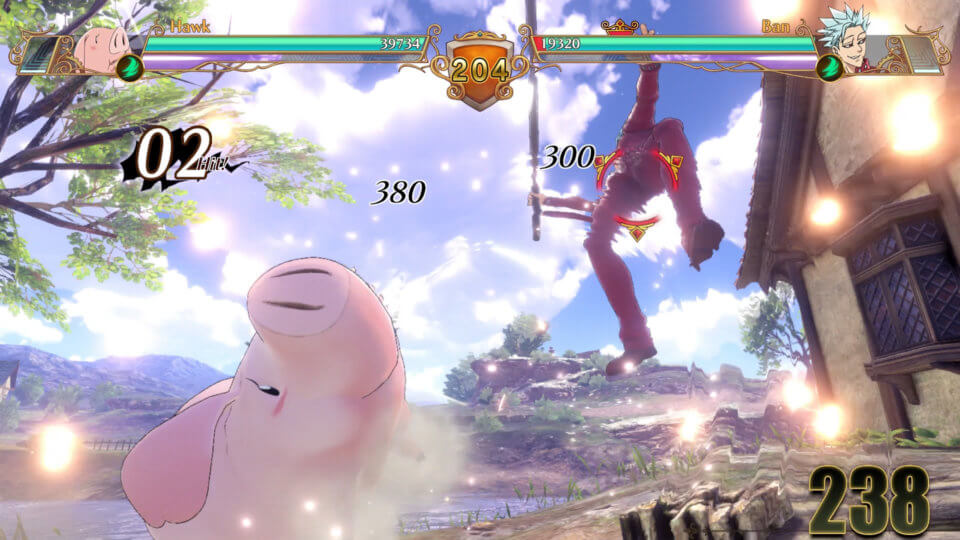 The Seven Deadly Sins: Knights of Britannia is an incredibly fun, addicting and fast paced action brawler that fans of the anime series will really enjoy. If you enjoyed how the Naruto Ninja Storm or Dragon Ball Budokai games played you’ll feel right at home with this game. While it is let down by it’s visual quality at times and you may find yourself struggling with the camera during a battle it still had me returning over and over again to try and unlock that next rune to make my favourite characters even better.

A PS4 review code was provided by Bandai Namco Australia for our The Seven Deadly Sins: Knights Of Britannia review.