In the 19 years since the Ratchet & Clank franchise premiered on the PS2, the series has seen many main line entries, spin-offs, a reboot and even a Hollywood movie. And in that time Ratchet & Clank have cemented their place as modern PlayStation mascots. Now in their latest outing Ratchet & Clank: Rift Apart the duo once again are sent across the galaxy to stop Dr Nefarious’ evil plans but with an interesting multi-dimensional twist. Ratchet & Clank has never looked or felt as great as they have here and utilises the hardware and technical capabilities of the PS5 to full effect to deliver what I consider to be one of the key ‘next-gen’ experiences currently available. 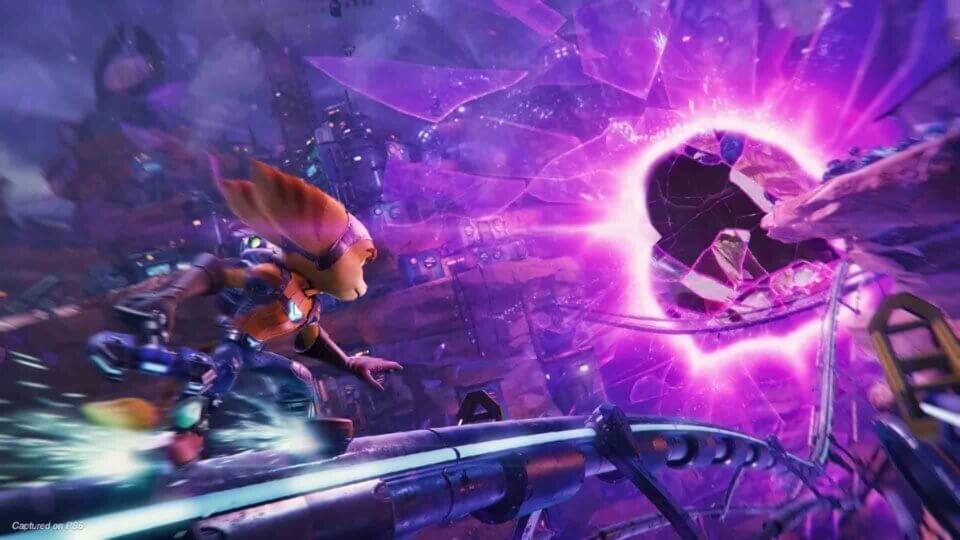 Rift Apart’s story picks up after the events of 2013’s Into the Nexus, continuing on the timeline from that series rather than being a standalone title or continuing on from the events of the 2016 reboot. If you haven’t played any of the previous titles, you can still jump into Rift Apart and have a great time, but some callbacks to characters, relationships and backstories that are referenced may be slightly lost on you as the game doesn’t hold your hand retreading who the side characters are or Ratchet & Clank’s relationship to this point.

Early in the story Dr Nefarious steals the Dimensionator, and during the scuffle of combat opens up rifts to many alternate timelines and planets across the galaxy. This not only sends Ratchet and Clank to many diverse planets and various points in time but acts as a core mechanic for the game and its level design as Ratchet and Rivet are able to utilise the rifts to instantly jump to different parts of the same world/level or into different worlds entirely. And when I say instantly, I mean it. I was constantly impressed by how quickly a completely new environment could be loaded in, completely different from the stage I was in in literally the blink of an eye. The team at Insomniac along with the SSD in the PlayStation 5 are working some magic here and using the advancements in the hardware in clever and unique ways. I believe it would be this core mechanic that required this game to be a PlayStation 5 exclusive title as the same effect just couldn’t be pulled off previously. 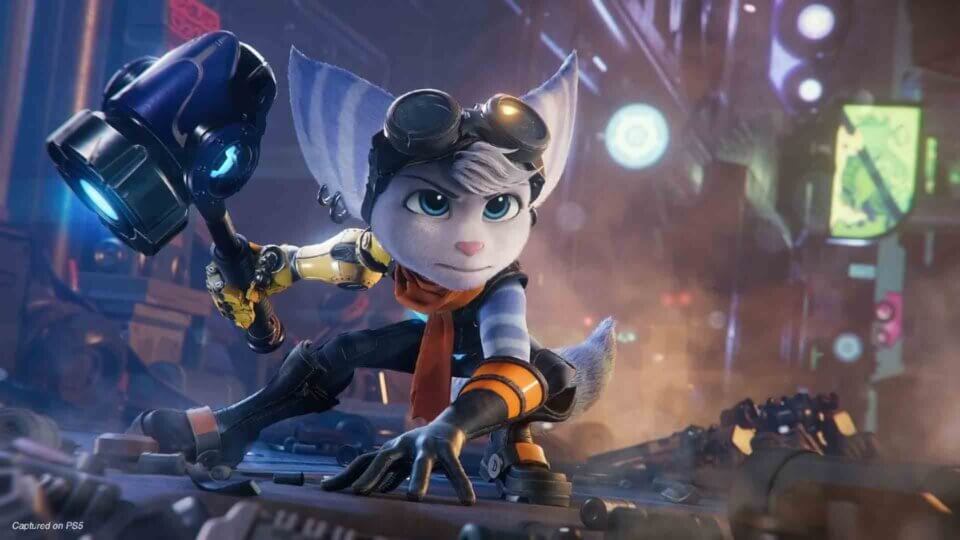 Before you even get through the game’s tutorial stage and start rift jumping the first thing you’ll notice about Rift Apart is how visually gorgeous and vibrant it is. The Lombax/Robo duo have never looked so good, and the biomes of the planets the adventure takes you on are so varied and interesting that it will wow you throughout the whole campaign.

It’s become a real cliché at this point whenever an animated game comes out that everyone says it ‘looks just like playing a Disney/Pixar movie’, but it is accurate in representing how close the real time rendering technology of games has come. The textures of the world and character models are so detailed, physically based rendering and ray traced lighting truly highlights the capabilities of the PS5. I found it impossible to notice when the game went from cutscene to playable level as the whole game is just consistently gorgeous when it comes to the presentation. 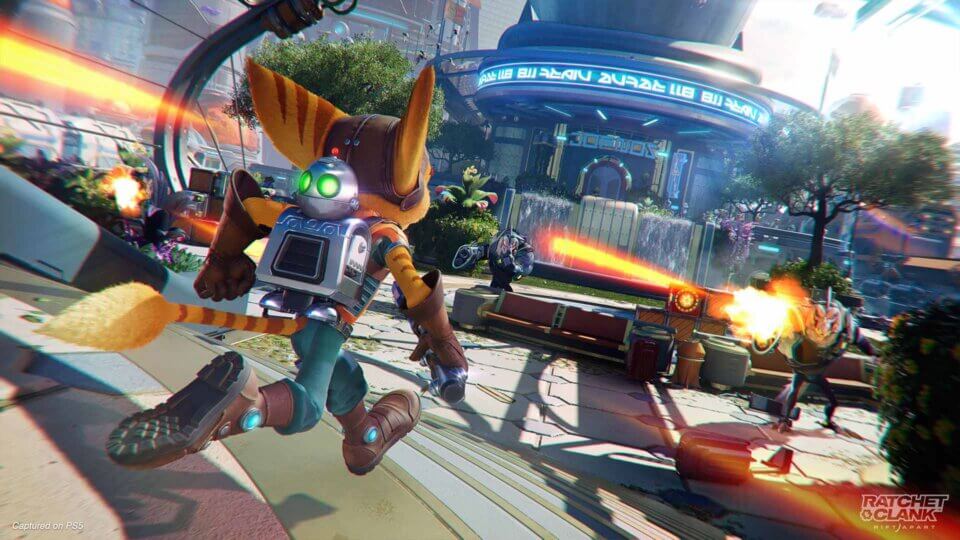 While the game is billed as Ratchet & Clank, one look at the box art (and the game’s pre-release marketing) they aren’t the only characters we’ll be playing as in this new adventure. Rivet, a female alternate dimension Lombax and her robot Kit will be joining Ratchet on the overall quest to stop nefarious. Their missions are mostly standalone from each other so there are some parts of the story solely controlled as Ratchet and vise versa. Rivet brings a fresh take to the story and I loved her character arc and her performance quite a lot. Her character brings a new dynamic to the core group of characters and I can absolutely see a Rivet and Kit spin-off game doing really well.

Thankfully their levelling, weapon progression and skill trees are linked, so unlocking upgrades and weapons etc are shared between both characters and remain persistent. 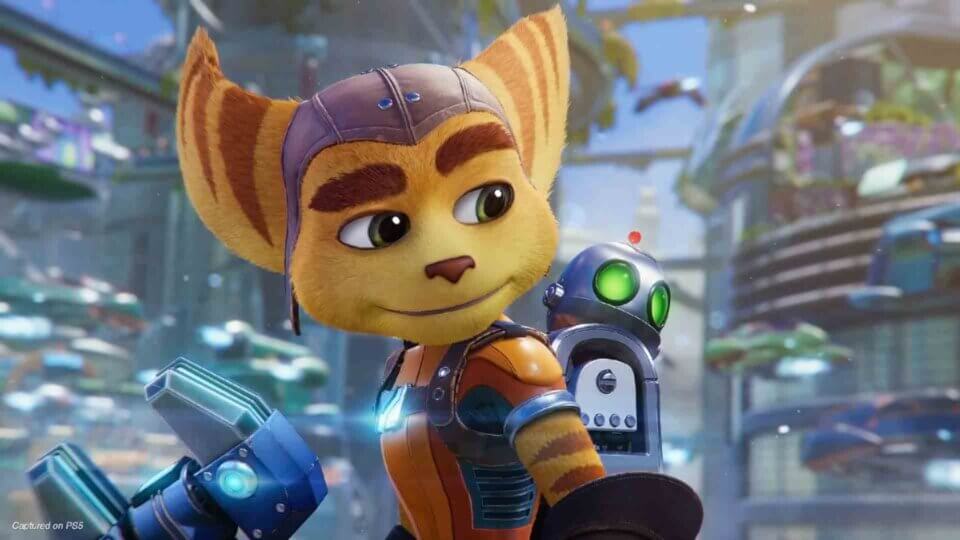 The addition of some new characters also brings some new mission types as well. Outside of playing through the main stages as Rivet and Ratchet. There will be Anomaly stages and Glitch challenges where you’ll take control of Clank and a new hacking spider character named Glitch to solve puzzles that will help Ratchet and Rivet progress to new parts of the stages. These puzzle areas provide a nice break from the highly stimulating frantic combat and the Clank anomaly puzzles aren’t incredibly hard but provide enough of a challenge that you’ll still get a sense of accomplishment when you manage to clear each room’s hazard and progress.

Now it wouldn’t be a Ratchet & Clank game without some wacky weapons to unlock and use. And Rift apart doesn’t disappoint in that department. Not only is there a large suite of weapons to use but for the first time, thanks to the DualSense controller we get to feel them as well. With each weapon having its own sense of ‘weight’ to fire thanks to the adaptive triggers, which when held down fully can activate the alternate fire mode found on many weapons. And the haptic feedback provides varied rumbles and shakes when using the weapons or traversing the environments further immersing you in the quirky worlds on the journey. 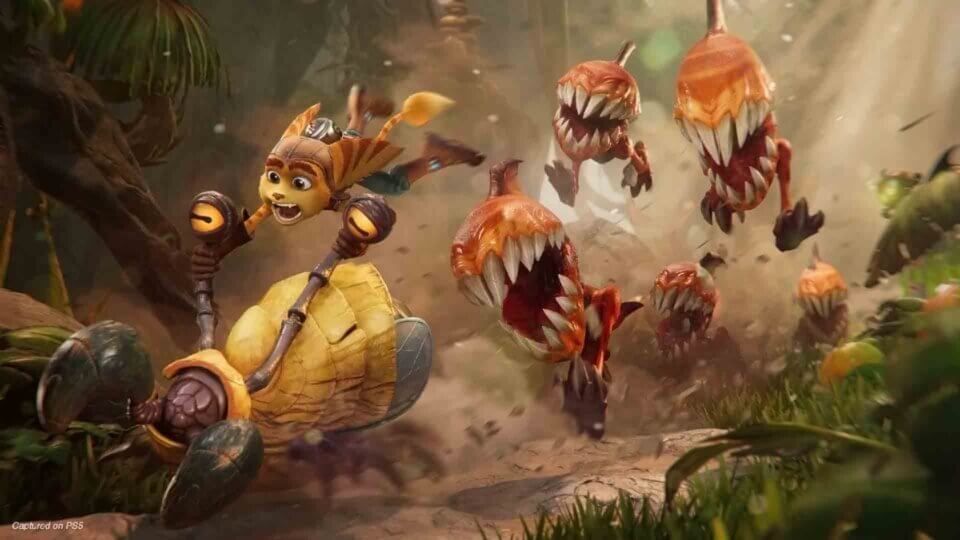 Outside of finishing the main story, there’s plenty to do in Rift Apart to keep you entertained and wanting to complete additional playthroughs. There are side objectives to complete on most planets, challenge arenas, rifts, armour and weapons to earn even after the main story is done and dusted. Some of the rift challenges could have been more difficult or varied and I would have loved some more side objectives to do on each of the worlds but these are minor gripes primarily caused by my want for more to do in these fantastic planets with this incredible cast of characters.

Ratchet & Clank: Rift Apart is a true showcase for the PlayStation 5 system. It’s visually gorgeous and it’s rift mechanic uses the hardware in amazing ways. I had a fantastic time in this latest adventure largely due to the great cast of characters, especially newcomers Rivet and Kit. I’m excited to see how the franchise goes forward in future adventures as Insomniac games have hit it out of the park again.