Chimparty is one of the games that recently launched with the latest batch of PlayLink titles released for the PlayStation 4. If you’re not familiar with Sony’s PlayLink titles, they are a family of PS4 games that began releasing last year that are controlled via a mobile companion app and typically require bringing multiple people together to play in a local multiplayer environment. 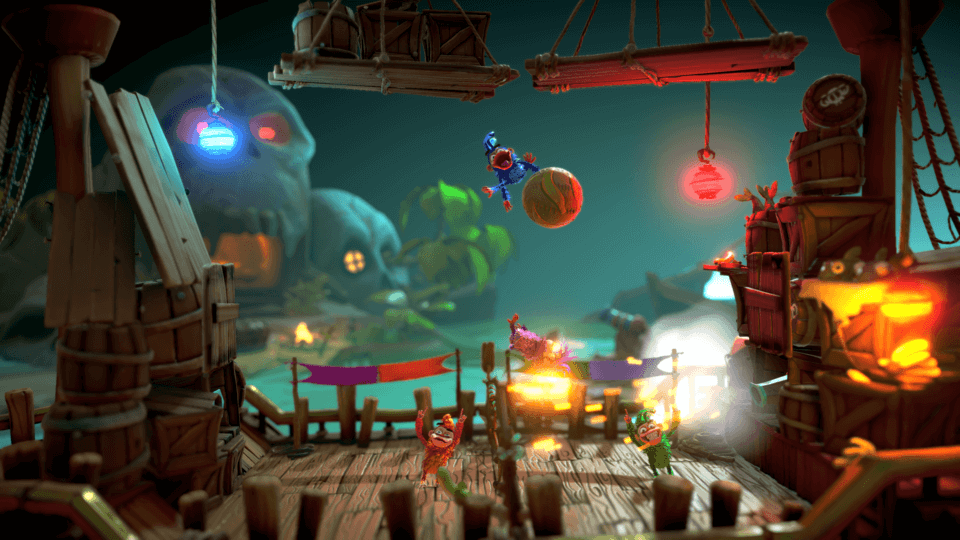 Chimparty is PlayLink’s take on the local mini game based party game. If you’ve played Mario Party or the mini game based Buzz titles back in the PS2 days you’ll be fairly familiar with the structure of the game. Once players have joined the game session via the mobile app they are placed onto the game board. The goal of the game is to be the first to progress all the way to the end of the board and reach the golden sofa. Each space on the board takes the players into a different mini game and depending on your performance in said game you’ll earn a number of stars, with the person that does best in the game earning a bonus star. The amount of stars you earn is how many spaces forward you move on the board and this is the gameplay loop that continues until one player reaches the sofa at the end.

Each of the mini games utilise a single button gameplay approach which you use the mobile device for. Depending on the game this button press could be jump/double-jump, selecting a running direction, assigning a trajectory for the launch based games among many other things. This makes the game really accessible to all ages as once you know what pressing the button will do in each game you know everything you need to do control-wise. It also allows you to focus on the game and not worry about controlling the full movement of your avatar as things get chaotic on screen really fast in many of the mini games. 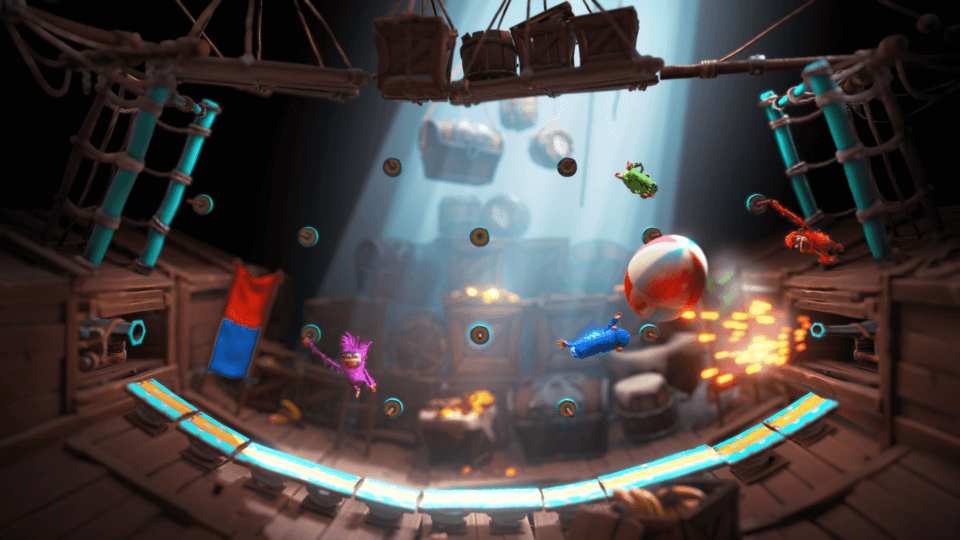 Although because of the design choice I also found it hard to feel like I was fully in control of my monkey in some of the game types. Especially in the games where you just control the jumping of the monkey. In these games the monkey moves forward automatically, similar to what you would experience in an endless runner game. But upon colliding with a wall, solid object or another player you’ll automatically change direction. Resulting in it being hard to keep track of yourself on screen or have any real sense of control when the pressure ramps up. Leading to some hilarious but ultimately frustrating moments.

While playing through the games you’ll also unlock various accessories and bonus items that you can equip to your player avatar using the mobile app when you’re not in a mini game. These items range from zany hair styles to glasses and shoes. Allowing you to add your own custom look to your monkey character. 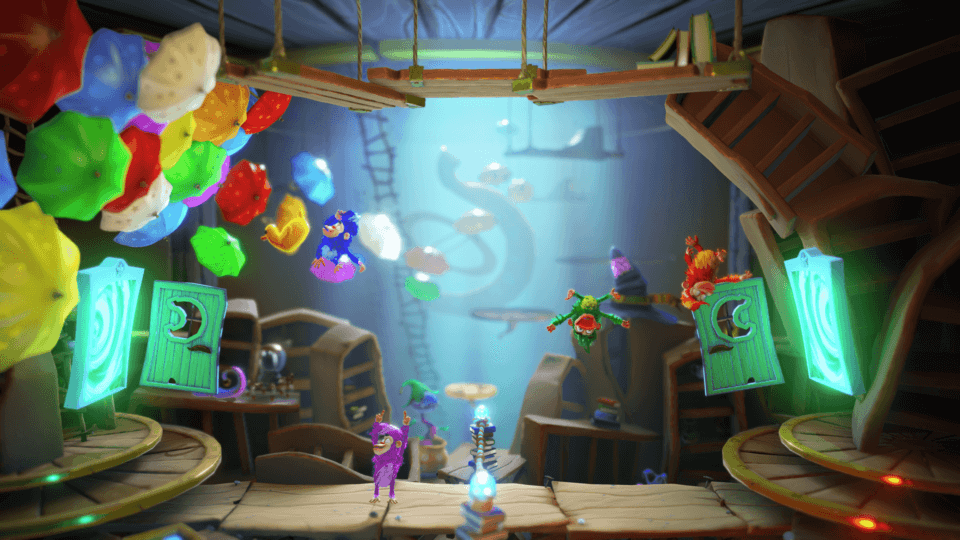 Unlike most of the other PlayLink titles, Chimparty is able to be played solo if you just want to jump in and play through some mini games without having to get a bunch of friends around. In solo mode the core game works much the same way, it’s still a race to the golden couch at the end of the game board but you’re trying to beat a large orange orangutan who is on the board also. When taken inside the mini games the other 3 monkeys are controlled by the game’s AI, and surprisingly they are quite competitive and difficult to beat at times.

Chimparty also has additional modes available to cater to those that may just want to jump in and play a few mini games but not worry about the board game component of the game. Random mode will give you 10 random mini games to play through back to back while Event mode allows you to build your own custom playlist of mini games that you can play through one after another.

My biggest problem with Chimparty was that there was a large variation in the levels of fun when it came to the mini games. Some of them, such as the monkey launcher game which tasks you with launching your monkey and bouncing them of various objects to gain the most distance are incredibly fun and remind me of an old flash game I used to play in my childhood. But then there are games like the ground painter or the endless runner type game I mentioned earlier where your only level of control is when to jump that didn’t feel fun to play and often just caused frustration. I also found that quite a few of the game’s 18 mini game types felt quite similar to one another and would have loved a bit more variation. That’s not to say I didn’t enjoy the mini games on offer in Chimparty though. Many of them are really fun. 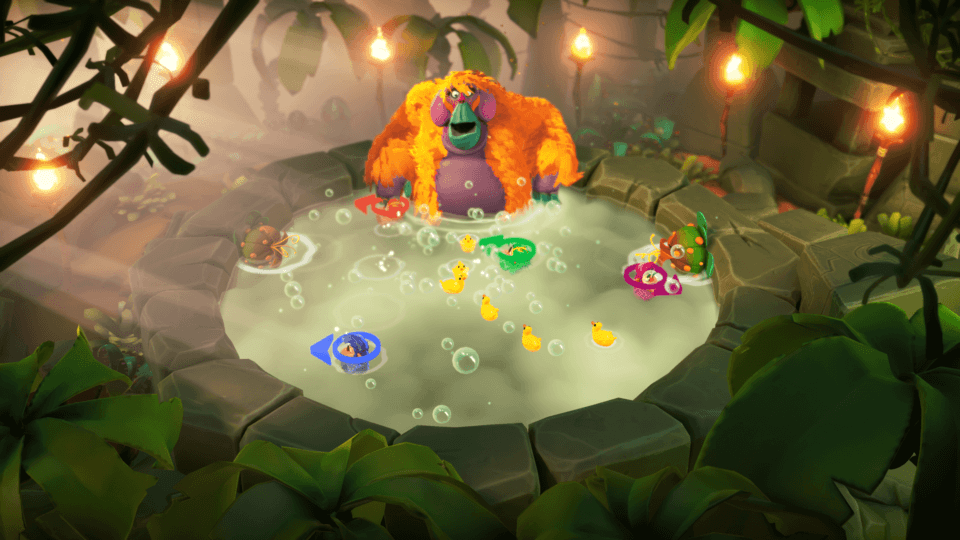 Chimparty is a welcome addition into the PlayLink library of games. There’s some real fun to be had when playing through the board game with a bunch of friends. But if you’d prefer to play alone the option for solo mode is there for you as well. It’s one button design choice is both it’s blessing and it’s curse. It’s simplicity opens the game up to a wider audience but also makes some of the mini games hard to control and follow. For it’s price point though it’s a worthwhile title to jump into if you want to have an entertaining night with a bunch of friends.