Growing up, I was obsessed with JRPGs, primarily those that were developed by Square Enix, and especially those that featured Tetsuya Nomura’s creative flair. And after spending years at that point obsessed with the Kingdom Hearts series, when I first saw The World Ends With You sitting on the shelf it caught my eye immediately and became a staple game within my Nintendo DS system.

Outside of a couple of character cameos in Kingdom Hearts: Dream Drop Distance, The World Ends With You was seemingly forgotten by Square-Enix and I had given up all hope of ever getting another entry in the series. That was until 2018 when The World Ends With You: Final Remix launched including some new content. But now 14 years since the launch of the original game, NEO: The World Ends With You is here to expand the TWEWY universe further. It brings with it the signature style established in the first game along with some great new features and characters that feel like a worthy addition to the world of TWEWY. 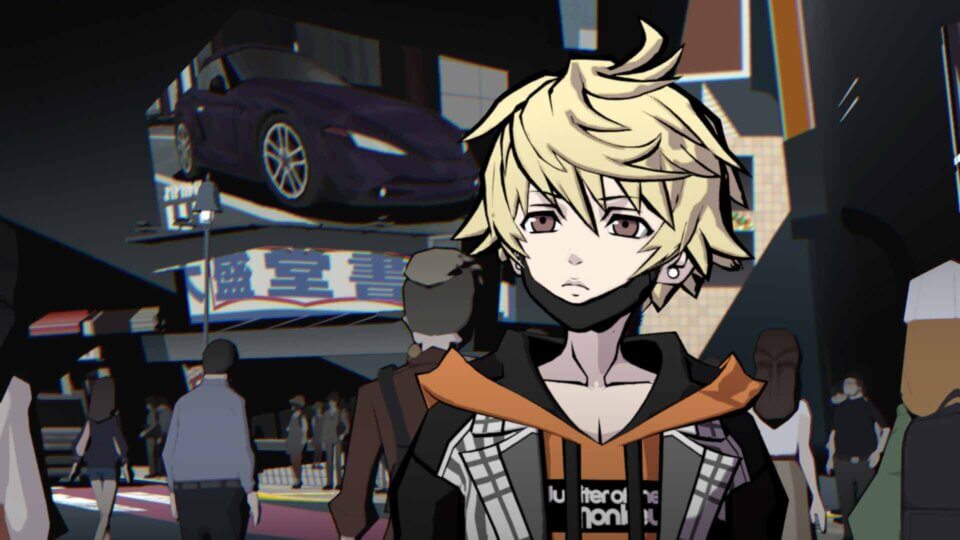 Like the original game, NEO brings us back to the streets of Shibuya for yet another Reaper’s Game. NEO consists of a mostly new cast of characters that through some clever writing and personal quirks are able to quickly establish their own personalities and position within the story. Right off the bat we’re introduced to the new protagonist Rindo Janade and his friend Tosai Furesawa (Fret) who I instantly found quite likable due to how the game instantly presents them as friends with some existing history and how quickly the narrative shows the lengths they would go for each other to keep the other out of danger. Rindo is much more open to talking and expressing emotions compared to the moody Neku who lead the first game which was a nice change-up as well.

The 2 quickly land themselves within a Reaper’s Game. Fans of the series will remember this also being the core premise of the first game as well. Rindo and Fret have to survive 7 days of ‘trials’ or be erased. But this time around the Reaper’s Game is able to be team based, and has an ongoing leaderboard, updated at the end of each day rather than solely requiring participants to be a partnered team of 2. While the combat is fun and exciting (which I’ll be getting to), the mysterious twists and turns of the super engaging main story is what had me addicted to keep going chapter after chapter. It’s the true highlight of the game. 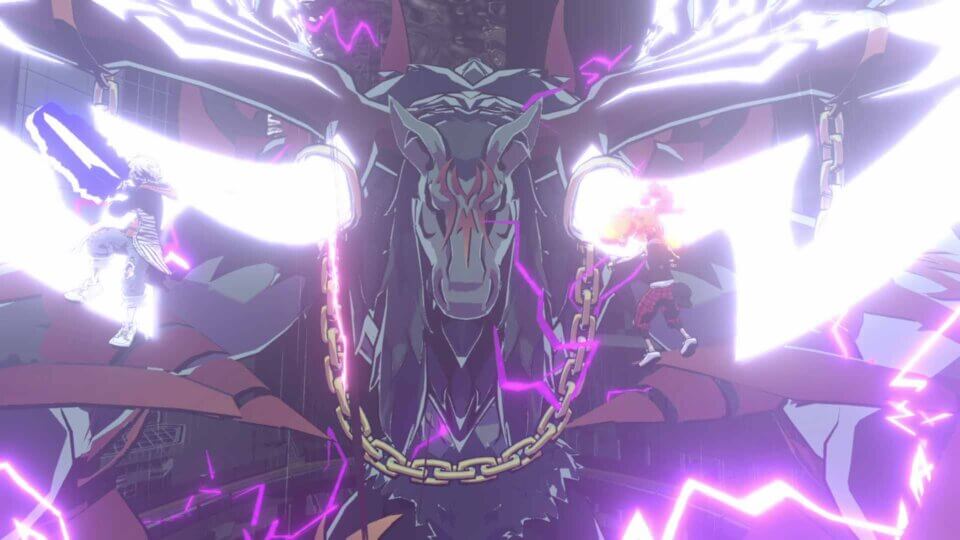 The combat in NEO is mechanically very different compared to the original game, but it translates to a traditional console incredibly well. Being a completely 3D title, it’s expected that there needed to be some large overhaul on how enemy encounters would also work. With the original game’s combat system being designed to cleverly simultaneously utilise the dual screens available on the Nintendo DS, the team had no choice but to adapt and change how battles in NEO would play out. The system here plays as a real-time action based combat but you’ll have the ability to control any of the members of your current party on the fly.

Each character is able to be equipped with psych pins, wearable pins that grant the wearer particular skills, buffs or magical techniques which are mapped to a particular button on the controller. Pressing the button corresponding to a particular pin will switch the active controlled player to that party member and unleash the pin’s psych ability. So as you’re manoeuvring around the battlefield and dodging in real time, you’ll simultaneously have control of unleashing any abilities as you see fit, which allows you to pull off some crazy combinations if you chain certain character’s strengths together. The game actually encourages switching between your various party members during combat with it’s new Beatdrop system. When prompted to ‘Drop the Beat’, if a different party member attacks the enemy, a Groove meter will increase, which upon reaching 100%, will allow you to unleash a super all-out style attack on the enemy. 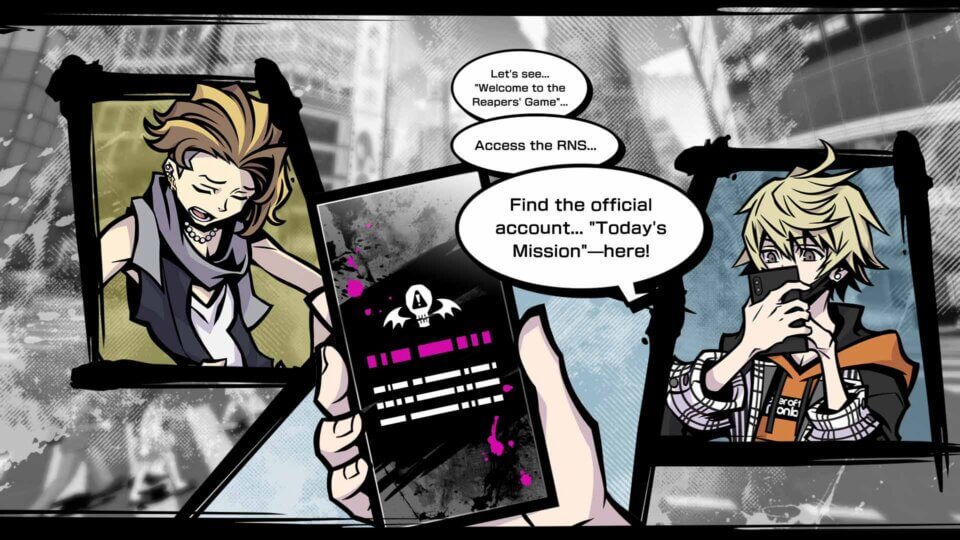 As all of your party characters are on screen during combat, the one’s not being manually controlled by the player are moving around and attacking using automated party AI. I occasionally ran into some poor choices by the AI system that resulted in me losing battles and having to restart or failing to perform actions when they should. It is a minor gripe overall, but was certainly annoying due to the fact it was possible to lose a fight due to things that were mostly out of my own control.

The sheer number of pins and the combinations they can be applied in keeps combat fresh and interesting and even adds to the overall gameplay loop of trying to collect all the pins available, which extend into the hundreds. Pins are often awarded as rewards for completing combat encounters and if you’re up for the challenge of the game’s higher difficulties, you’ll also have a greater chance at earning those rarer pins. This adds a further risk/reward system to the game as the overall difficulty is something that you can tweak throughout the game if you want to increase your odds of those higher level pins dropping.

The TWEWY series oozes style and it’s backed up again with a killer soundtrack. Much like the fashion styles on display, the musical genres featured in NEO are diverse and quirky, but in a good way. It’s not uncommon for a track to start off with a Jazz beat before transitioning into electro synth and finishing with a heavy metal breakdown. Much like the story, it keeps the music exciting, unpredictable and living in your head rent free long after you’ve turned the game off. I do wish the outfits and apparel that can be purchased in the stores to earn combat buffs were also reflected visually on the characters. But I do understand from an art perspective why that would be a huge undertaking, as the cutscenes take place in a hand drawn visual novel style featuring Nomura’s striking character portraits. 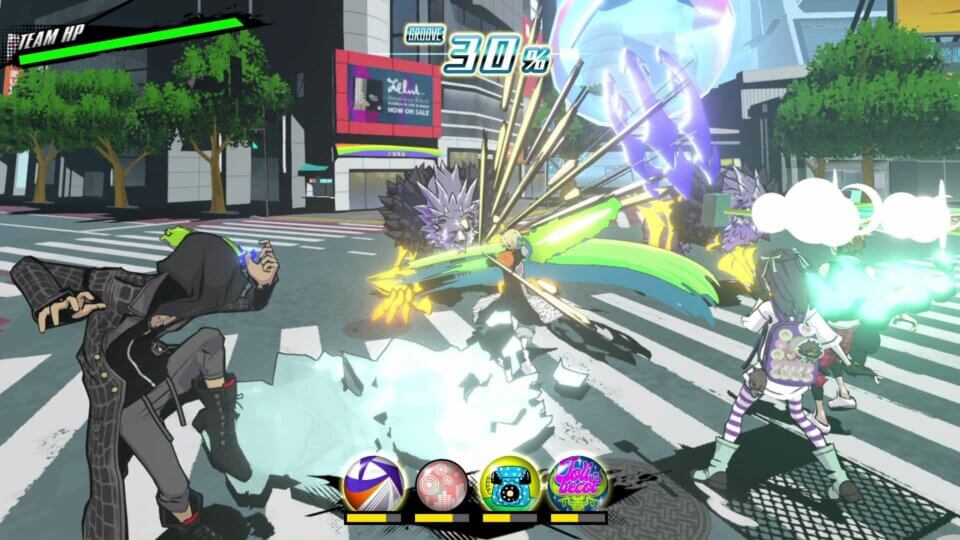 NEO took me roughly 45 hours to complete which does clock in significantly longer than the original game, but with the large cast of characters, their performances, great writing and the twists and turns the story continues to take, I never felt bored or felt the pacing was dragging too poorly.

While you can jump into the game without having played the original it’s not something I would recommend. You’ll be missing out on so many of the callbacks and cameos as they’re presented and while Neo does try to fill in the key points it thinks you need to know, the exposition is rushed more often than not. Similarly to the individual entries in the Kingdom Hearts series, this game’s goal is to be a true sequel to something that is already available and expects you to have played what came before it as it won’t be holding your hand throughout and providing long winded recaps on previous events. As mentioned, you can play through NEO without having completed the original, and probably have a fairly good time. But fans of the original game will get so much more out of the story of NEO based on their emotional connection to both the characters and the world of TWEWY.

NEO: The World Ends With You was a long time coming but was a very worthwhile addition to expand on the existing world and characters created in the first game. Fans of the series will get a real kick out of the story, it’s characters and it’s callbacks, but I’m certain it’s style, presentation and music will bring in many new fans to experience their first Reaper’s Game too. I’m hoping it’s not another 14 years before we get to witness more from this series, but hey, even if this is all we get from TWEWY, I can end this experience very satisfied.

A PS4 review code was provided by the publisher for the purpose of this review. Game was played on both a PS4 and PS5 unit during the review process.