Developers Polyarc have created something special here with Moss. Many have tried and not quite nailed trying to create a high quality, challenging but rewarding game that feels great to play and is set in a vibrant world filled with life. Even fewer manage to do all of that and have it work in VR. Somehow Polyarc have managed to do just that and have given us what could easily be the brightest gem for the Playstation VR system.

Moss drops you front and center inside a fantasy storybook. It’s a magical, heartwarming adventure filled with character’s you’ll fall in love with and creates a world full of luscious, detailed environments that although aren’t explicitly developed throughout clearly portray the aftermath of a great war that has occurred off screen. I found this environmental storytelling extremely effective and had me scouring the levels in the hopes of discovering something new about the world of Moss.

Moss does something I’ve never experienced in a game before. It is both a third person game and a first person game simultaneously. You use the Dualshock 4 in a traditional manner to control lead character and adorable mouse Quill traversing the platforming and puzzle sections of the stage while you personally embody a character referred to in game as “The Reader”. Using the motion tracking of the Dualshock 4 you’re able to interact with movable parts of the environment to move platforms, take control of enemies and flick switches to solve puzzles and open up the path for Quill to reach the exit of that stage. 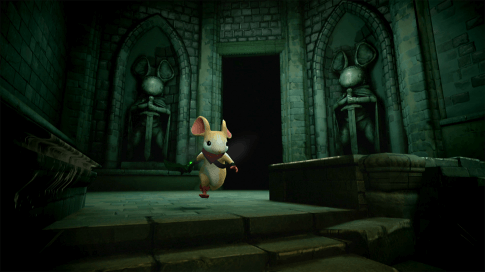 In many of the stages you’re able to see your end goal or exit from the very beginning of that stage. The challenge is working out how to get Quill to that door. The puzzles start off easy enough but by the end of the game I found myself feeling quite challenged by some of the puzzles, with some requiring a good dose of trial and error just to see what would happen in the world if you tried moving a certain piece of the environment or hitting switches in a different order. None of the puzzles are on the same level of difficulty as something you would find in The Witness but will still give you a similar sense of accomplishment when you do manage to get Quill to that exit gate.

When you’re not solving platforming puzzles you’ll be keeping the enemies at bay with Quill’s sword in combat. It feels just as good as the moment to moment platforming gameplay. It’s a very simple but effective combat system that you’ll come to master quite quickly, making you feel like a battle hardened warrior by the end of the game. 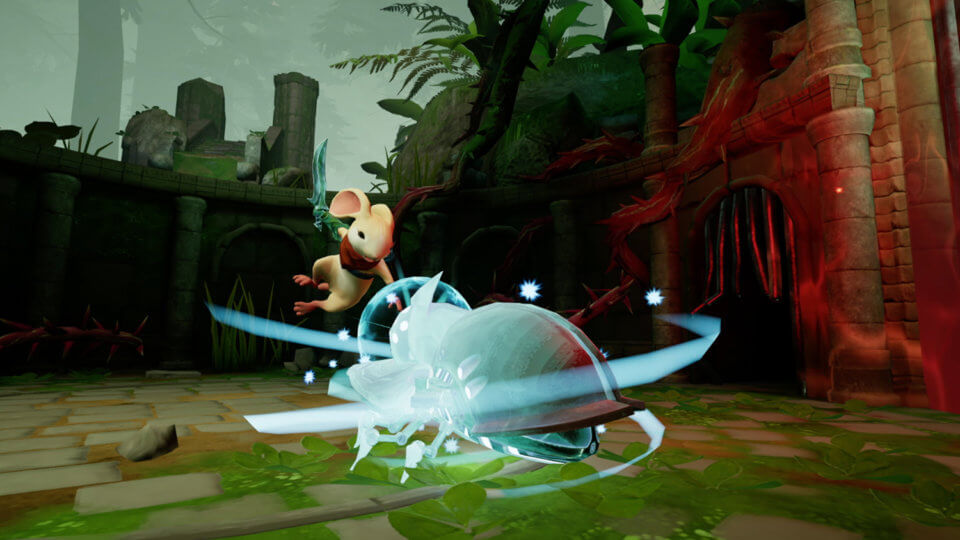 The character animations are silky smooth and realistic, well as realistic as a bipedal mouse warrior could be. I’m not sure how Polyarc did it but Quill’s jumping, climbing and combat movements are exactly what I imagine a mouse would move like. It’s almost as if they taught a mouse how to stand on two legs, fight and then motion captured the little guy. This quality animation helps sell the immersion factor of VR, for those hours I spent inside the world of Moss I felt that Quill and I were really on an adventure together.

My bond with Quill got so strong throughout my playthrough that I felt genuinely bad anytime Quill happened to die, either in combat or platforming puzzle mishaps. I haven’t felt this bond between myself and a playable character in a game for some time.

Moss is built from the ground up with VR in mind, and it uses the immersion factor and depth to great effect. Throughout your journey you will occasionally find hidden scrolls which act as the main collectible in Moss. Some of these are able to be found naturally or on an adjacent pathway to the main path but many are fairly well hidden, requiring the player to manually lean in, peek around corners or occasionally stand up to find these hidden scrolls. Jumping back in for a second playthrough to finish collecting the scrolls provides added longevity to Moss, especially for those players out there that are trophy hunters.

Eagerly Awaiting The Next Chapter 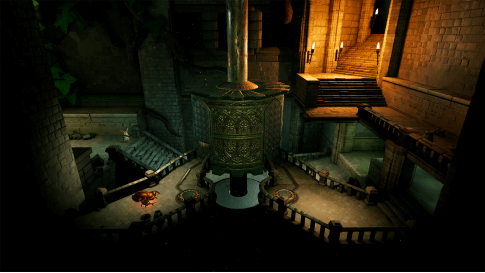 I managed to finish Moss in around 4 hours. Some would think that is a bit short but as a VR experience I found it to be a perfect length. It’s abrupt cliffhanger ending closed out this chapter of the storybook, it just has me wondering if/when we’re going to be able to jump back in with Quill and continue our adventure. It was a similar feeling to the one I got after watching The Fellowship of the Ring for the first time. It was a great ride, but it’s clear there is so much more story to be told here.

If you own a PSVR it’s a no-brainer, Moss is an absolute must play title. It may very well be the highest quality, most polished game available on the platform. It makes smart use of the PSVR system and it’s characters, combat and cleverly designed puzzles will leave you craving more when the credits begin to roll. I’m holding out hope that the sequel (or next chapter) isn’t too far away because i’m more than ready to jump back in and spend more time with my new friend Quill.

A PSVR review code was provided by Playstation Australia for the purpose of our Moss review.