Ever since the success of the Marvel Cinematic Universe catapulted many lesser known Marvel properties into the mainstream of pop culture, many have been exposed to what the company has to offer outside of their extremely popular Spider-Man, X-Men and Fantastic Four franchises. One of the shining gems that have gained mainstream appeal over the past decade has been the Guardians of the Galaxy series, primarily thanks to its fantastic cast of characters and interesting worlds. I actually remember when watching the first movie in 2014 thinking that it would make a great setting for a video game and after playing through their latest adventure, it seems I was right.

When Marvel’s Guardians of the Galaxy was first announced back at e3 of this year I was initially quite sceptical, especially coming off Square Enix’s last foray into the Marvel universe with last year’s Avengers game. A game which I did enjoy the main story of but limited it’s potential by relying on repetitive missions and randomised loot box mechanics to fuel its endgame. My interest was piqued when Eidos-Montreal revealed that Guardians of the Galaxy would be a fully single player, narrative driven experience, but I was still a little sceptical with how it would all come together. Now after playing it, I’m so glad it’s a game that I can recommend not only to fans of Guardians of the Galaxy, but to any fans of large scale AAA action adventure games. 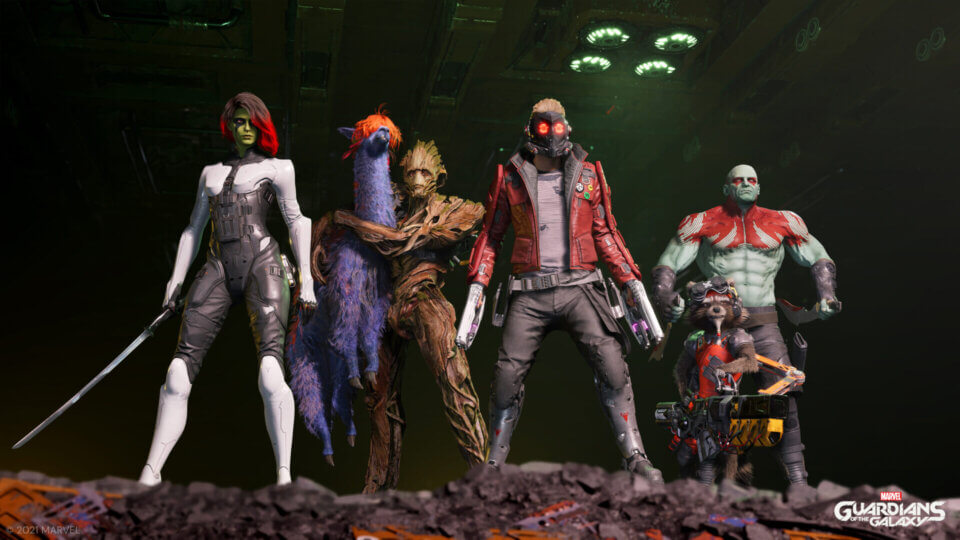 Without revealing too much of the overall plot, as it is a narrative driven adventure after all, the game follows the Guardians of the Galaxy at a time where they’re still trying to make a name for themselves and much as they do in the comics, find themselves coming together to get out the messes they often work themselves into. When they’re actions lead to the group being fined a hefty amount by Nova Corps, the Guardians come up with the great idea to sell a prized alien creature to a known monster collector Lady Hellbender for a large sum to pay off their debt. But with one issue leading to another, the Guardians find themselves in the middle of a snowballing problem that risks the safety of the whole galaxy.

The Guardians of the Galaxy cast is made up of the same lineup from the MCU movies. Consisting of Peter Quill (Star-Lord), Gamora, Drax, Rocket and Groot. You’ll play through the game solely as Star-Lord and experience his past through some playable moments and some great character development that is picked up via conversations with numerous characters throughout the adventure and not just a big exposition dump which was nice. You’re the captain of the crew and thus many of the game’s decisions come down to Star-Lord, and thus the way you want to approach the game’s choices. 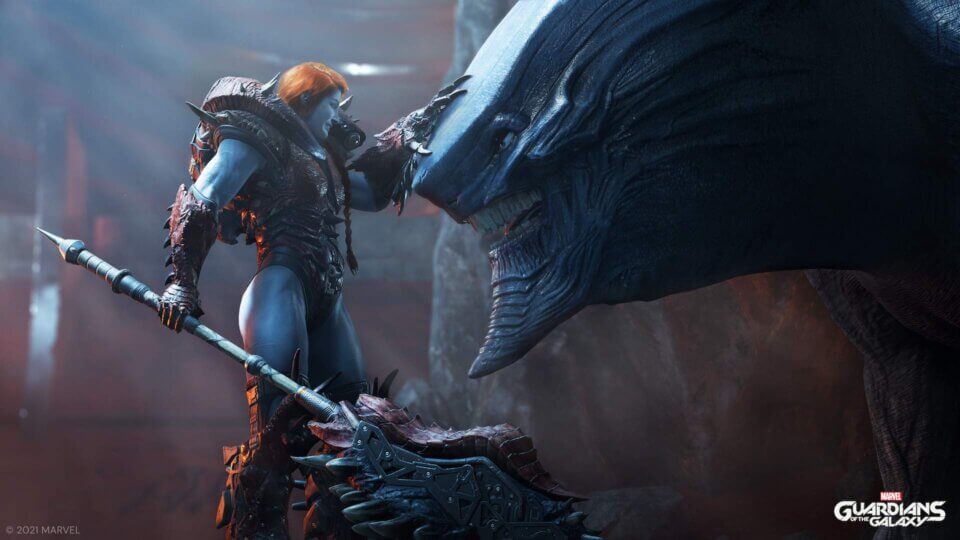 These choice and dialogue options often lead to branching story paths or conversations and there are scenes that can be completely missed if you don’t go looking for them when given the opportunity to free roam through the environments. This not only allows for an element of player choice and development with certain characters, it also further encourages multiple playthroughs as you can play through the game again but making the opposite decision at key points to see how differently particular moments can play out.

The story itself is a really well written Guardians of the Galaxy adventure that not only offers up a really fun space adventure, it nails the interactions of the cast and is often laugh out loud funny in the same way that the Marvel movies are. And while this game is not linked in anyway to the MCU films, it’s absolutely inspired by it with the performances, character designs, mannerisms, quirks and the voices coming off very close to what we’ve become used to seeing these characters interact on the big screen. The plot of the game is also really well paced throughout, with the story hopping from beat to beat, with many environmental and planetary changes throughout the journey keeping it visually interesting for the whole 20 hour gameplay adventure.

The banter between the characters is almost constant, they’re the definition of a ragtag crew but their disagreements and fighting often comes from a place of love for the group and actually bonds the characters and shows how much they care about and would sacrifice for each other. A core theme which is presented more and more the further you get through the game. 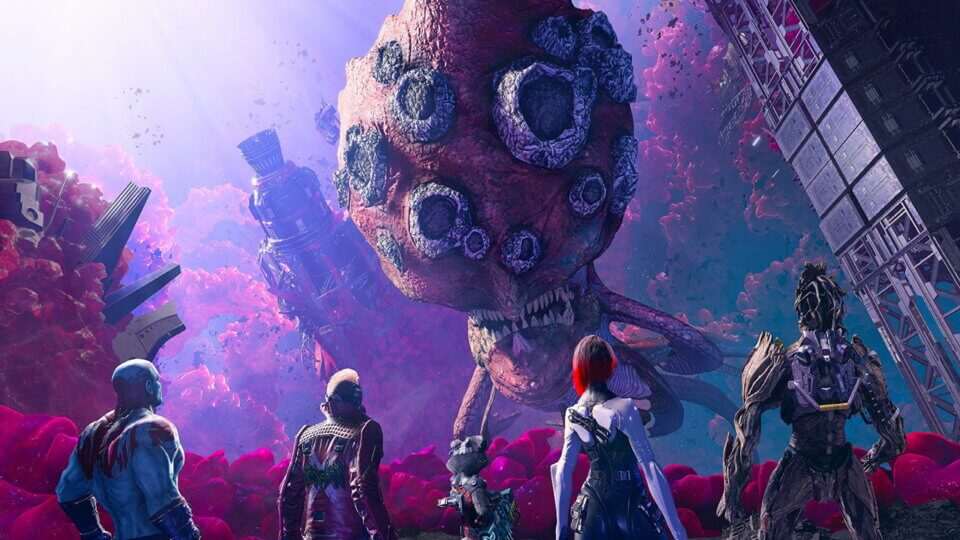 I also loved that throughout the game, outside of the cutscenes, much of the dialogue is contextual to the scene you find yourself in whether that be Peter calling out stuff he finds while walking around your ship the Milano, or while traversing the numerous planets you’ll visit. One particular moment from early in the game that stuck in my mind was a scene where we approached a forked path and Rocket mentioned we should go in one particular direction as the other just leads to a dead end. Thinking I was smarter than the game, I went to the path I was instructed not to thinking there would likely be hidden goodies to find. But all I got was a snarky ‘told you so’ comment from Rocket when the path looped back around and I could see the rest of the Guardians on the right path and myself just stuck having to loop back around and take the other path. I loved how well designed the scene was and how the dialogue both insulted Star-Lord’s character and broke the 4th wall to the player.

The combat in Guardians of the Galaxy is action based and as mentioned earlier, you play through all of them controlling Star-Lord. But all throughout combat you’ll have the ability to command the other members of your crew to unleash their own unique special attacks. Star-Lord himself fights with his dual blasters that you’ll have the ability to control the equipped ammunition type, which can deal different types of damage to different types of enemies which encourages you to constantly switch things up on the fly. The combat system overall is easy to grasp but does begin to get repetitive by the game’s end as I wish there was more on offer than just the blasters and a basic melee strike.

The combat abilities can be further extended though via the games skill tree. YOu’ll be able to unlock new abilities for not only Star-Lord, but for all of the Guardians crew’s special strikes. This does breathe the occasional breath of fresh air into the game’s combat as these are progressively unlocked throughout your journey.

Within minutes of booting up the game, I was quickly stunned by how technically and visually impressive it was. The game is gorgeous and features some really well designed and vibrant alien planets and species. There are sections of the game that feels like walking around the Star Wars cantina with all the varied and interesting alien races on display. On a technical standpoint, the game features some of the most detailed textures throughout, but the thing that impressed me most was the lip synching during the dialogue sequences. It actually looked like the characters were saying the words coming out of their mouths, with their lips being animated with a great amount of detail rather than the general flaps we get while characters speak in most games.

One thing that really helped this game feel like Guardians of the Galaxy was its incredible soundtrack. Much like the Guardians films, the game features licensed music tracks from some of the 80’s biggest rock stars along with a full album by a fictional band Star-Lord. The tracks play all throughout the game, and really highlight some key moments during cutscenes and while walking around and conversing within the Milano you’ll have access to the ship’s jukebox where you can pick any of the licensed tracks to play in the background, including bangers from Rick Ashley, to Starship, KISS and many others.

Throughout my time with the game I did encounter a few bugs that had varying levels of impact to my experience. There was an issue that popped up a couple of times where the dialogue choices and subtitles would get stuck on the screen long after they should have disappeared. I also twice encountered a problem where during combat encounters, I would clear the room of enemies but the game wouldn’t register the encounter was over and move onto the next scene, resulting in me just running around unable to progress. This required a forced re-load to the last checkpoint to fix and also forced me to replay the combat encounter all over again in the hopes that it let me progress the next time. Thankfully it did and I was able to finish the game. 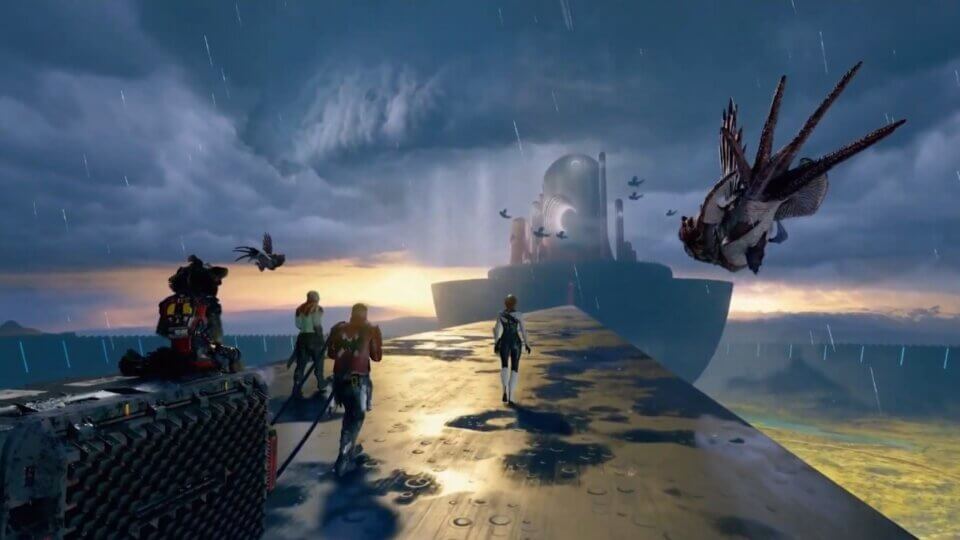 Overall, Guardians of the Galaxy was a fantastic surprise. I was sceptical going in but I was quickly blown away by the visual quality and art direction of the game, it’s great writing and its incredible soundtrack. Guardians of the Galaxy is another hit for Marvel Games and I can easily see it showing up on many game of the year lists at many outlets later this year.