With everything going on in the world at the moment, I’m sure the idea of leaving the planet to research and colonise another one has crossed the minds of a few people out there. It certainly seems a few of the world’s billionaires are trying to work towards it. And that is essentially the high level premise of Jett: The Far Shore. Much like space travel itself, Jett: The Far Shore is all about discovery, presenting the player with a vast, beautiful and occasionally dangerous world to research and understand. And while the discovery of alien fauna and flora is really fun, the slower pacing of Jett’s story and some frustrating controls prevent it from being a game I can universally recommend to everyone. 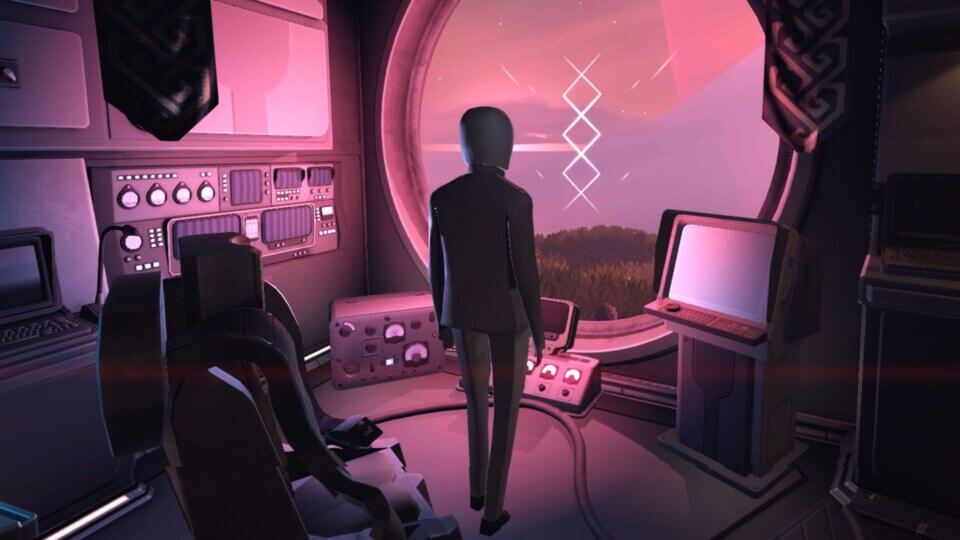 In Jett, you play as Mei, a girl who becomes one of a chosen few to leave the planet to head onto an unknown, unexplored ocean planet with the goal of exploring its native life and landscapes and locating a mysterious signal called the hymnwave that everyone seems to be talking about. The game opens quite coldly, with Mei saying goodbye to her friends and family before you’re sent up into space, spend approximately 1000 years in stasis before falling through the atmosphere and onto your new home. It’s initially unclear why this is may be required or why Mei has ended up a ‘chosen one’, but trying to uncover further answers is just the tip of the discoveries ice burg Jett presents to the player.

The core gameplay of Jett takes place within your jett, the rocket-like space craft you’ll use to traverse, scan and learn about your new home world. There are also portions of the game where you control Mei in the first person, as you explore the world on foot, travel to and from your ship and when back at Ground Control talking with your other crew mates assisting with your main mission. These sequences let you learn more about your other crew, their proficiencies and more of the game’s world building via conversations where you can select various dialogue options.

Jett is a very pretty game, firstly with its art direction featuring low-poly character models that are both striking and strangely likeable, down to the individual life forms discovered on the ocean planet. But above all with its sci-fi inspired biomes, environmental design and its space crafts. The vast range of vibrant colours that make up the fauna and flora of the planet keeps things visually interesting and really sells the concept that you’re seeing all of these alien life forms and concepts for the very first time.

The framing of the game’s cutscenes and traversal also provides a very cinematic approach to it’s presentation and while zooming through the world’s wider landscapes, you’ll also have the ability to tailor the camera position to create a close or far field of view that further shows off the large scope of this untraversed planet.

Early on in the story, Mei’s shipmate Isao says to Mei “Let’s take a moment to breathe this in”, and that statement sums up Jett: the Far Shore pretty much perfectly. Jett isn’t very exposition heavy, it’s story, worldbuilding and character development come via discovery. Jett is a slower paced adventure, especially in it’s opening hours, but it is respecting of your time. At the start of each chapter, the game will actually display how long it should take to complete that section, allowing you to set aside the right amount of time to leisurely enjoy the next chunk of the game. While I don’t mind having to work to uncover a narrative, or even mind a slower paced adventure, the cold start combined with the slower paced intro may put some players off. But the payoff once the game comes into it’s own and the mysteries, twists and dangers begin to reveal themselves do take Jett to another level of enjoyment.

Jett: The Far Shore is unique in one other, very noticeable aspect too. It features a completely original fictional language that each of the characters speak. A lot of effort went into creating this language, but the choice to do so has come with it’s own pros and cons. Obviously it’s saved on having to bring in voice actors that would be judged based on their performance and further enforces the sci-fi nature of the game, but it also prevented any of the characters gaining a distinct voice I could further identify them by. This also means that all dialogue in the game needs to be read to understand. Conversations in the game often auto progress sooner than I had the ability to read or comprehend what was being said. This made things harder to follow, especially at the beginning of the game when you’re trying to get context for who the characters are, what otherworldly concepts and jargon they’re speaking about. There are options in the game to advance the dialogue to get through scenes quicker, but not to slow it down.

I played through the game on PS5 and loved the implementation of it’s DualSense features. Walking around as Mei uses the haptic feedback of the controller to allow you to feel the steps as she manoeuvres through grass, crunches on stones or climbs the ladder into the jett. And the thrusters of the jett utilise the adaptive triggers to apply various levels of resistance to the thrusters and also shake violently as the ship begins to overheat further adding to the overall immersion of the game.

The controls though can be stiff and frustrating at times though. While zooming through the large open areas of the planet feel great, when it comes down to performing moves that require a bit more finesse or when the camera pulls in close, for example when you’re attempting to hide from pursuing creatures or finding shade patches, I often got stuck on collision boxes in the environment or frustratingly had to attempt to stop and turn around to regain control of the ship again. The Jett has some great capabilities, the finesse controls though, need work.

Jett: The Far Shore delivers a tranquil, discovery based sci-fi experience that allows you to feel what it may be like to colonise a brand new planet. Everything is new and you’re unaware what is friend or what is foe but the experience is all about gaining knowledge. While the game certainly has some flaws, and some quality of life improvements would be much appreciated, I still enjoyed uncovering the game’s twists and mysteries enhanced by Jett’s soothing soundtrack.