Ghostwire Tokyo is the latest release from the team at Tango Gameworks, known best for developing the two entries in The Evil Within franchise and was founded by famed horror designer Shinji Mikami, the creator of the iconic Resident Evil series. Because of the game’s background and initial trailers, I was bracing myself for a pretty spooky experience before jumping into Ghostwire Tokyo, but was pleasantly surprised to find that the spooky supernatural-ness of the game is there more to set the tone, enhance the worldbuilding and provide an unsettling atmosphere rather than jump scare. These things, combined with a very attractive art direction and a less than typical combat approach resulted in a game I really enjoyed for the most part. 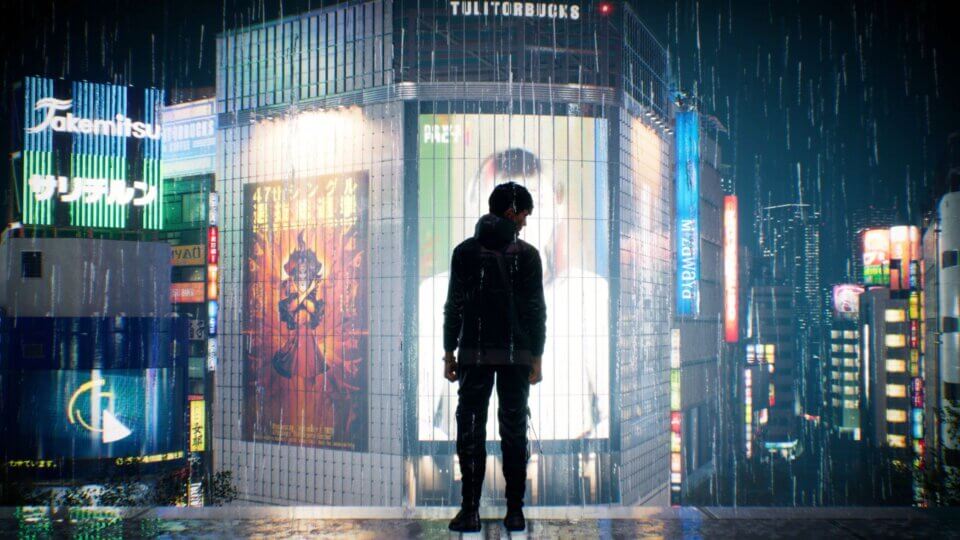 In Ghostwire Tokyo you play as Akito. A guy who at the start of the game seems pretty close to death and finds himself possessed by a wandering spirit calling himself KK. Forming a symbiotic relationship, the two realise pretty quickly that they need each other to continue living and complete their goals. And on the plus side, KK has granted Akito the powers of Etherial Weaving. The ability to fuse spiritual energy with certain elements to produce magical projectiles and protection spells.

Why would he need those you may ask? Well because upon waking up, Akito learns that disaster has set upon Tokyo. Most of the population has completely disappeared, a deadly fog is spreading across the town and spectral ‘Visitors’ have been set loose and now patrol the world, requiring you to eliminate or seal them away with your new magical enhancements. 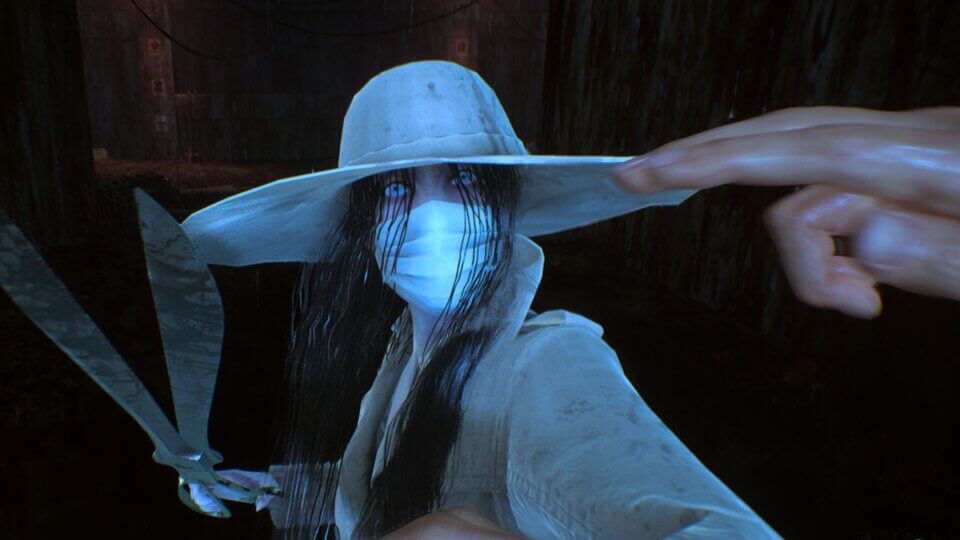 If having the the town overrun with spectral spirits wasn’t bad enough, the Hannya mask wearing group that seem to be responsible for these creatures have also kidnapped Akito’s sister with the intent to perform a sinister ritual. Leaving Akito with a lot of things to learn, a lot of things to uncover and a lot of spirits to both save and eliminate.

The key thing that kept me engaged with Ghostwire Tokyo was the mystery of everything. I felt as lost and out of place as Akito does when he first wakes up. We get to experience the whole relationship of getting to know KK and learning his magical abilities and later expanding and enhancing them as well as uncover the mystery of what the hell has happened to Tokyo and how can it be fixed? Even though the game gives you a reason to want to keep going, in the plot line around rescuing your sister, I mainly wanted to find out more about the interesting world, KK the voice in my head and the link between everything going on and the folks in the Hannya masks. 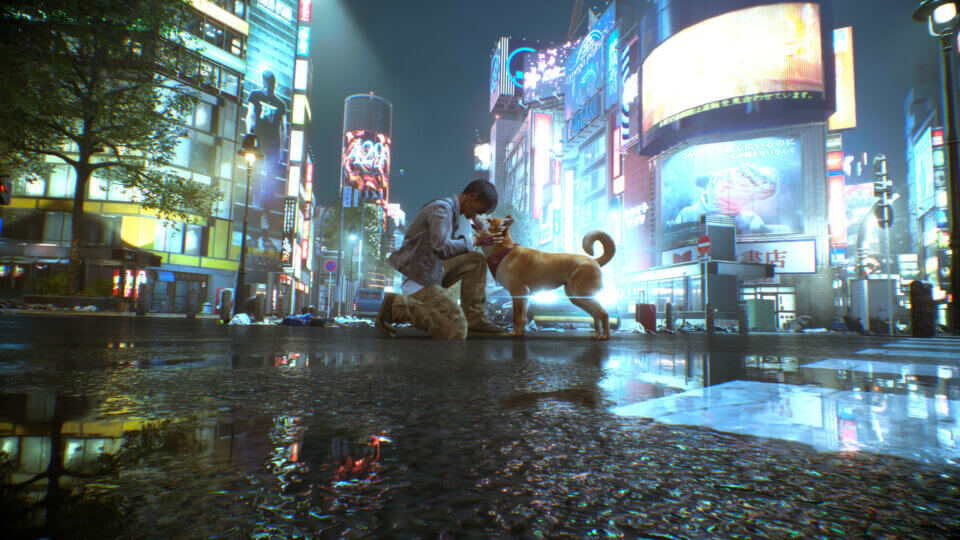 The other main thing that kept me in the world of Ghostwire Tokyo was the actual world. I’m a big fan of Japan, it’s culture and architecture so getting to explore it in-game was a massive plus. And the world itself is beautiful, the neon lit streets, rain soaked environments and the many lush gardens and temples are incredible to traverse, to the point where you forget that around any corner there could be a headless schoolgirl waiting to surprise attack you.

The creature designs take great inspiration from the various Yokai featured in Japanese folklore and many of them are really unsettling. It’s a good thing many of the combat systems are designed around ranged combat because I never wanted these things to get too close, especially those that appear and move in groups. It’s the creatures and the supernatural components of the world where Ghostwire Tokyo links back to the games you would probably expect to come from the teams that developed The Evil Within. The supernatural elements are more unsettling than they are horrific, which is a surprising step back from what Tango Gameworks have previously been known for. There are certainly plenty of things within this rendition of Tokyo that will scare you but I would hardly classify the game as fitting into your typical horror genre. 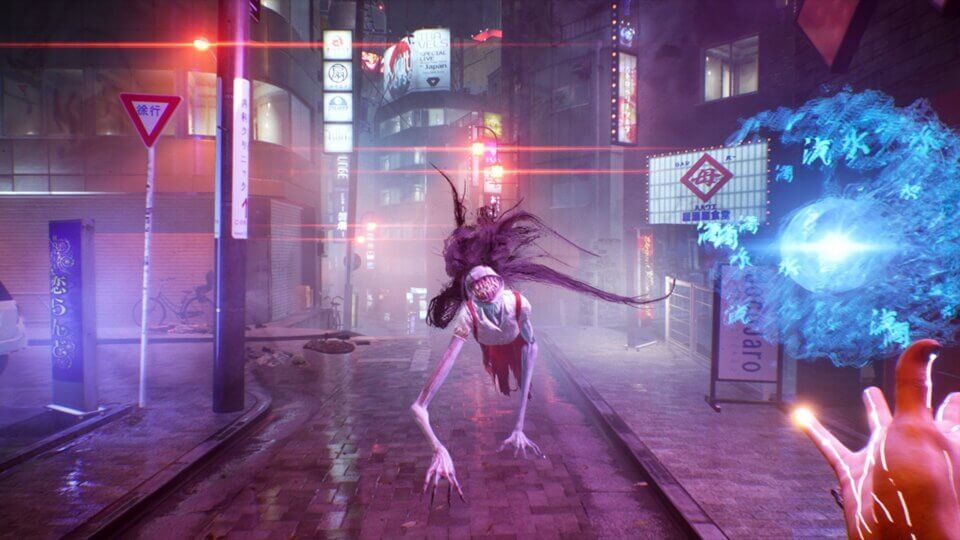 I also found it refreshing to experience a combat system that isn’t completely based on modern weaponry and instead primarily utilises magical hand signs and abilities that have been granted via the bond with KK. Although until you get far along into the game to learn different elemental abilities and upgrade your skill tree combat is quite repetitive taking down enemy after enemy with the game’s default wind style projectiles. It does open up over time allowing you to unleash some very flashy looking attacks, learn new elements and brought back many of the feelings I had playing Skyrim primarily as a magic caster.

Outside of being a first person action adventure game, Ghostwire Tokyo is an open world adventure, allowing you to traverse the streets and rooftops of Tokyo with the secondary goal of clearing the fog that’s begun to encroach the city by cleansing the many Tori gates scattered across town, complete side quests for the townspeople that consist of various mission types and investigations and for those that like open world games consisting of many many icons on the map to check out, you’ll get plenty of that too. Outside of the main quest line there is plenty of adventuring and side quests to complete and they’re mostly interesting enough to keep you entertained and offer a nice change of pace amongst completing the main story missions. The enjoyment of them aren’t all the same but there’s no denying there’s plenty to do within the streets of Tokyo.

Ghostwire Tokyo also features a number of language and graphical options to allow you to tailor the experience to best suit your needs and preferences too. Including a full Japanese and dubbed options when it comes to the character voices. I toggled between these and found the cast in both to be great, and portraying the characters well but the in game character animations are locked to the Japanese lip sync even when playing in English which does show the game is dubbed at times. I would have loved if the game featured dynamic lip synching, but from what I could tweak in the options, there was no current toggle for this. 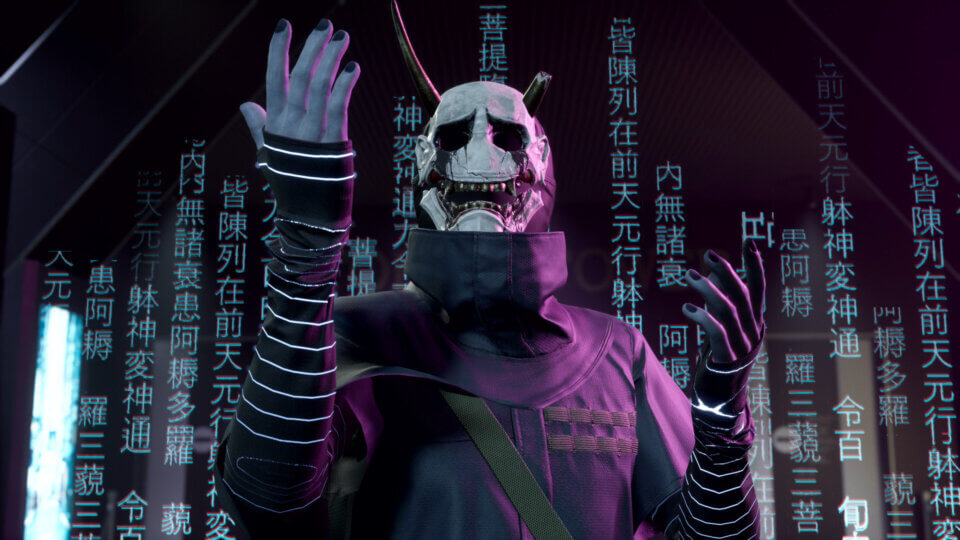 Ghostwire Tokyo is a brave new direction for the team at Tango Gameworks. It still retains that unsettling spooky vibe at it’s core but the team have shown that they can make environments that look stunningly beautiful at the same time. The game’s setting and combat system won’t be everyone’s cup of tea but after the first few hours the game really grows into something that I really enjoyed exploring and is fuelled primarily by it’s sense of mystery and supernatural weirdness. 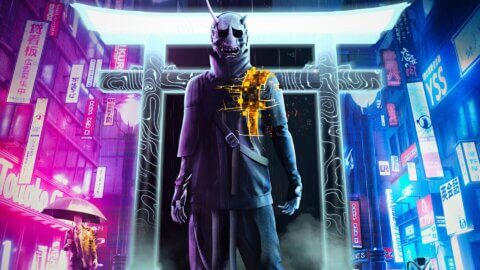