Anime games typically lend themselves well to video game adaptations. There’s no secret around that. Especially if the source material it’s based on is fairly action packed or has hundreds of episodes of story to pull from. Just look at the plethora of Dragon Ball and Naruto games that continue to be incredibly popular even though their core series’ ended many years ago. It always surprised me that another massive and long running series, Fairy Tail, never truly got the video game treatment it seemed to lend itself to so well. That is until now. Yes I know there have technically been games based on the Fairy Tail franchise developed in the past, but as none of them until this point have been translated and officially released in the west, this game will certainly be counted by just about everyone as the first Fairy Tail game. It’s unfortunate this first entry has come a few years after the series has concluded, as I could easily have seen it having successful releases following releasing concurrently with the airing arcs of the series which drove a lot of people towards the Naruto Storm games. Fairy Tail is a solid first attempt at a video game adaptation of ‘some’ of the Fairy Tail story but due to it’s design choices it’s something that I can probably only recommend to existing fans of the series. And certainly isn’t a great jumping on point for those brand new to the series.

Where most anime video game adaptations have you primarily play through the story of it’s anime counterpart and allow you to take control of your favourite characters as you do, Fairy Tail for some reason decides to do mostly that but starts your story off at around 120 episodes into the series, and adapts the following three arcs from that point fairly well and accurately. Unfortunately that means you get no introductions to the series’ large cast of characters, their relationships with each other or their motivations for being in the Fairy Tail guild. The game assumes you already came in knowing all of that, and I was surprised to see it make no effort to bring you up to speed on any of that beforehand. 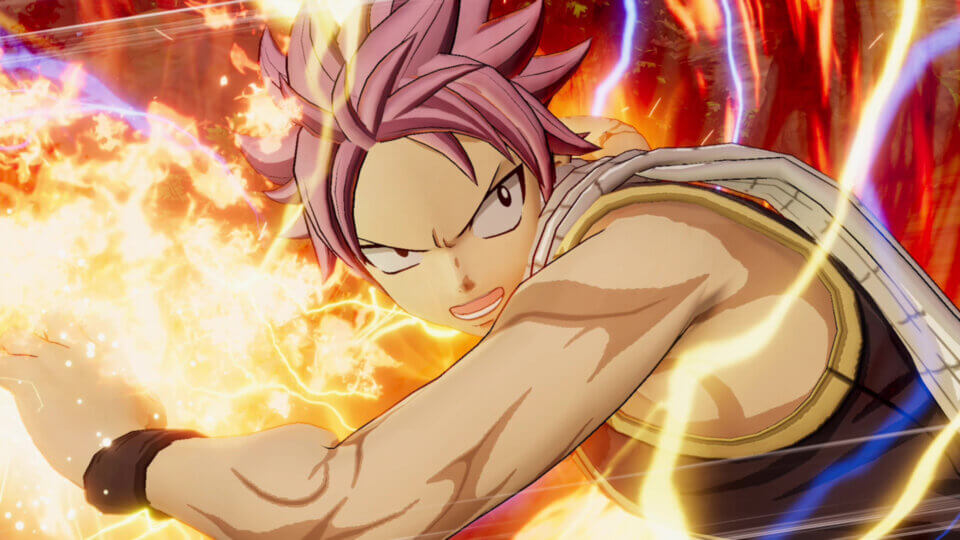 Fairy Tail starts things off with a bang, teaching you the basics of it’s turn based combat system by throwing you into a boss battle that takes place towards the end of the Tenrou Island arc of the anime. I did like that the game taught you the ropes during what appears to be a high-stakes battle and not the typical level 1 enemies most JRPG’s typically have you face off against. Fans of the series will know that following this arc comes Fairy Tail’s 7 year time skip. While the anime used the plot device to pull off your standard Shounen anime time skip, I liked the way it was adapted into the story in the game, as it does adapt it’s consequences for the Fairy Tail guild quite naturally into a video game scenario. The group have been gone for 7 years and in that time the guild has lost all of the status it once had within the Kingdom of Fiore and new enemy forces have arisen. Presenting both a reason to progress, to gain back what has been lost in that time and also antagonists to defeat. 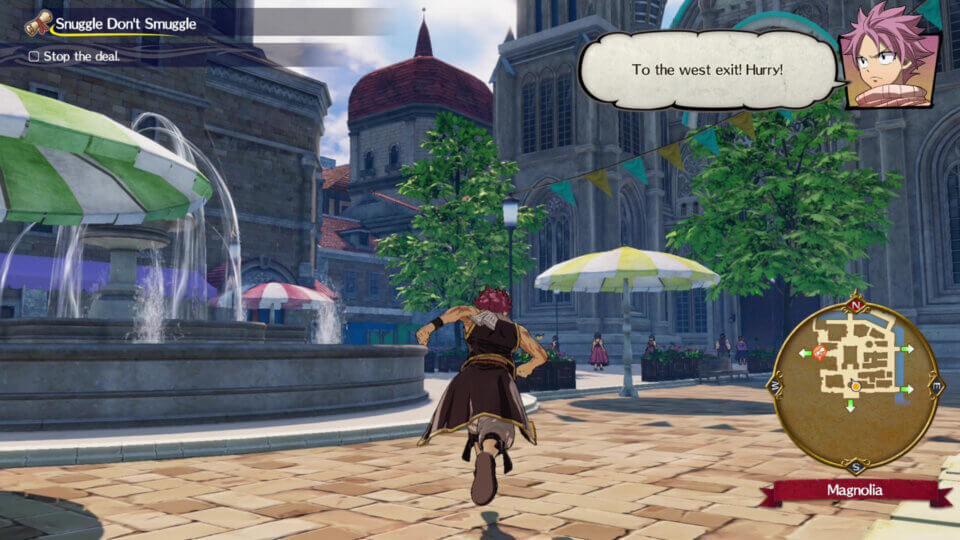 The story content that Fairy Tail focuses on is delivered quite well and is faithful to the storyline of the original manga and anime series, quite closely adapting the Grand Magic Games, Tartaros, and Avatar arcs of the series. The game does have some original content, but it’s primarily based around fleshing out the back story of the guild members in social link style side missions. Quite a few of these were fun to see but ultimately don’t result in anything to groundbreaking or deep.

Fairy Tail’s combat is designed around a turn based battle system. Party member attacks will target a specific pattern, covering a number of spaces on the enemies’ grid on the battlefield, providing a layer of strategy to each round, as your selected move has the potential of striking numerous enemies if lined up properly. Otherwise the combat system is fairly simplistic, as you don’t have any movement to worry about just the option each round of utilising Magic, Attacking, Defending or using Items. 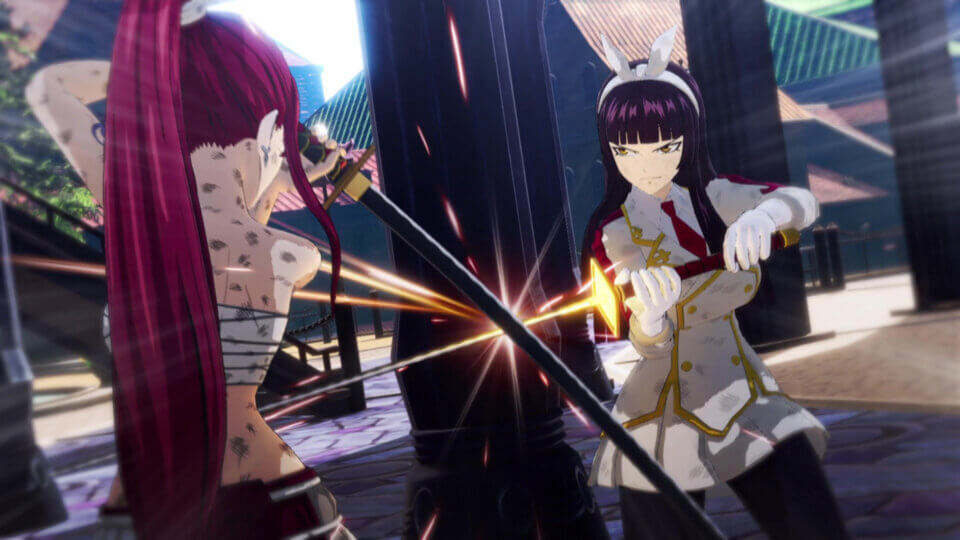 If you have personal favourite characters from within the Fairy Tail guild, you’ll be glad to hear that they are likely playable in the game. With Fairy Tail featuring 16 playable characters to unlock and play as. You’ll be given the opportunity to freely roam around the world as one of these characters and missions let you pick which character’s you’d like to use to construct your party and take into battle. There are some core missions which have party requirements and require the inclusion of specific party members, but for the most part, you can approach combat using characters you prefer, or suit your playstyle.

Unfortunately while I did like the core premise of the game, it certainly comes with some fairly noticeable flaws. One of the first being it’s visuals. For the most part the character models and performances are fine, but while traversing the levels that make up the open traversal segments of the world it’s clear to see many low resolution textures and bland, repetitive level layouts. I also didn’t like that many of the core missions throughout the game came with level restrictions gating them. Forcing me numerous times throughout my playthrough to have to grind repetitively on lower level enemies just to meet the level cap restrictions of the next main mission. Slowing down the pacing of progression considerably at times. 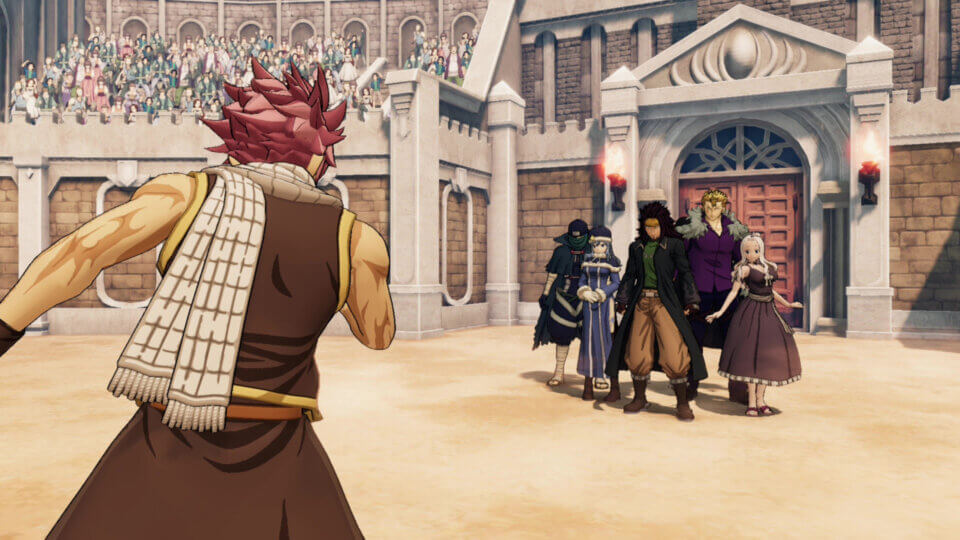 As I mentioned in the opening of this review, it’s been great seeing the Fairy Tail characters on screen in a game for the first time, it’s been long overdue. I just really wish it didn’t pick up the story at a point where it’s seemingly ignored the first 100+ episodes. This game is going to be nowhere near as enjoyable to people using this game to try and get into either the anime or manga as it assumes you have so much knowledge of the characters, motivations and settings from the Fairy Tail universe. Fairy Tail is a good first video game entry if you’re already a fan of the series but it’s flaws hold it back from being a great one. I’d be keen to see what GUST Studios decide to do if given the opportunity of working on a follow up game. Fingers crossed things are taken back to the very beginning, opening the doors to the franchise for everyone and hopefully driving new audiences of people to check out this great series.