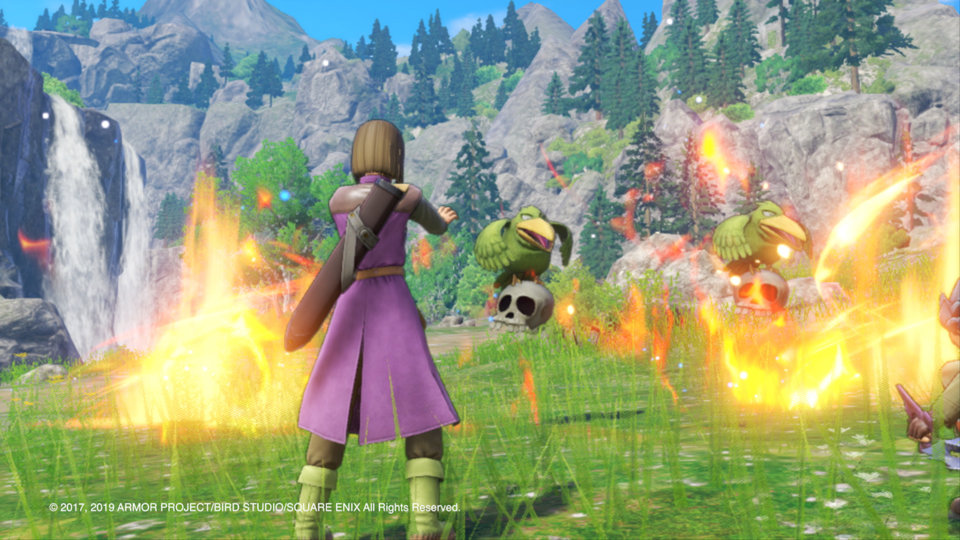 For the full impressions of the game and it’s systems check out my original review for Dragon Quest XI here. This review here will primarily focus on the differences introduced in the Switch’s Definitive Edition.

In Dragon Quest XI you play as a young boy who discovers he is the reincarnation of the Luminary, a being who is prophecised to be the one to destroy a predicted dark presence looming over the world. It’s hardly an original story, various pieces of media have used this same narrative framework. But Dragon Quest has never been about having a gripping story at it’s forefront. The thing that makes Dragon Quest so special are it’s moment to moment gameplay and it’s large cast of characters. 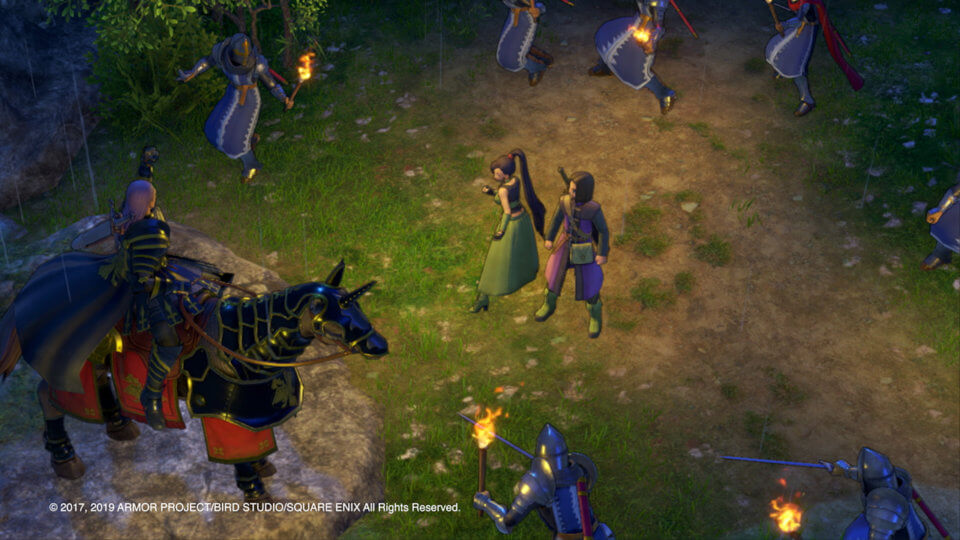 While the ‘eliminate the looming darkness threat’ is the main overarching plot of the game the full story is actually made up of many mini narratives. Each new town you visit along the journey normally raises a new set of tasks to complete or threat to eliminate and once those threads are tied up you’re on your way to the next town to meet more people while still working on your main quest as the Luminary. Not too dissimilar to the core structure of the Pokemon anime, it’s established early on that Ash will take on the Pokemon League but he must travel through many cities on his path to do so, learning and helping the townspeople on his way.

The game isn’t quite an open world but is made up of numerous sections and cities that on their own are quite large, still giving you the ability to explore it’s various zones. There are often rewards granted for this exploration too. Investigating off the main quest path will often reveal side roads or hidden area’s that more often than not lead to a treasure chest containing some really helpful loot.

The vast number of interesting characters and the visually unique towns form a world I want to keep returning to and will likely continue to do just that. Chipping away at the enormous list of side tasks when not playing another game for review. The main story lasts 50-60 hours and as expected with a story that long it does have some pacing problems at times. Thankfully the moment to moment adventuring, battling and loot exploration keeps the game being fun to play at all times.

Now this Definitive Edition isn’t your run of the mill port of a game to a new system. The Definitive Edition on Switch includes a long list of tweaks, upgrades and additions to the game, some of which are quality of life changes while others add whole new quests, content and characters. 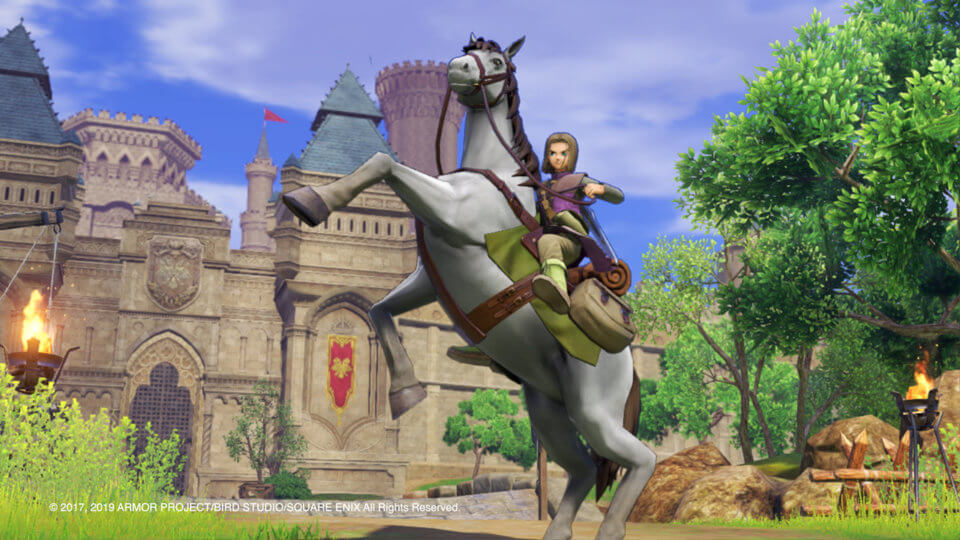 Of the long list of changes, there are a number that majorly change up the game experience. In the Switch version you can now skip cutscenes at any point, something that I was glad was introduced as having to sit through the same cutscenes over again on an additional playthrough, after a death or game restart did grow tiresome. There are a number of new rideable beasts added, the Fun-Size Forge can now be used anywhere and not just at campsites, you can now have full control of the camera during battle, the other party members are also now capable of moving around during battle and will follow behind the player character when moving around the world. The Definitive Edition has also added a Japanese voice track for the characters and you have the ability to switch between that and the original English track.

But when it comes to big changes, the Switch version has introduced a brand new character, Madame Cherie, who has her own part to play in the story of DQXI, and they have also added brand new sidequests and endgame missions where you’ll adventure with and learn more about the members of your party. Biggest of all, and a feature I know many classic Dragon Quest fans will be excited about, you can play the whole game in a newly implemented 2D mode. In this mode, the whole game looks like a classic SNES Dragon Quest game, all of the content and story is present, but some changes such as now having to pick the moves per turn for each of your party members in battle has been added to better suit this game mode. 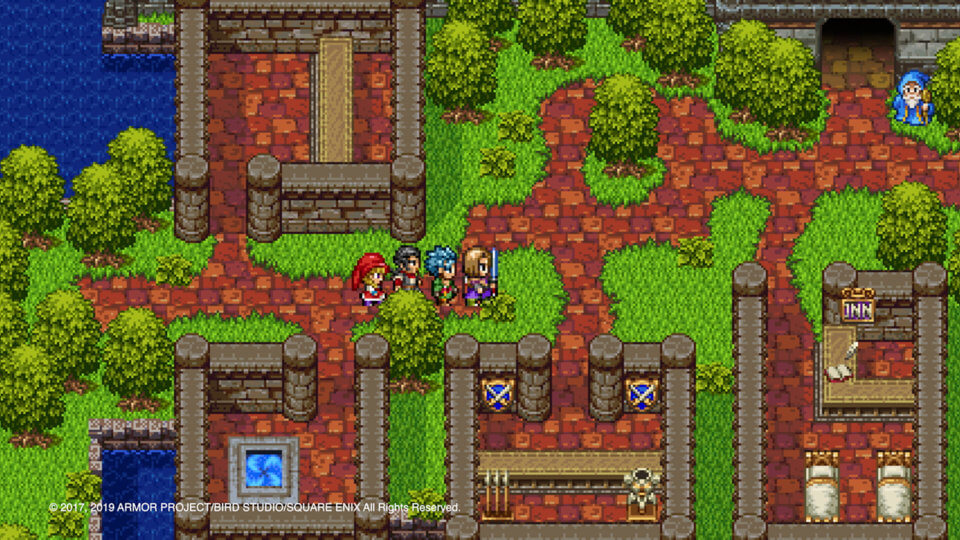 As expected, there have been some graphical downgrades implemented to get this game running on the Switch. Nothing major, and you likely won’t notice the differences unless you’re comparing them side by side but they’re there. The game runs at 30FPS both docked and in handheld mode, and both modes have utilised variable resolutions that aim for 900p when docked and 720p when not. These changes were likely necessary to maintain performance, which I’m glad to say is great. The performance of the game remained solid throughout and load times were much the same as what I remember them being on the PS4 version.

Square Enix have stated that they are currently ‘undecided’ if the additional content included in the Switch’s Definitive edition will be added back into the PS4 and PC versions so for the time being, if you’re after a version of Dragon Quest XI that included all the content on offer, your best bet is picking it up on the Nintendo Switch.

If you’re looking for a JRPG to get stuck into and haven’t yet jumped into Dragon Quest XI, there’s no better time. The additions made to the Nintendo Switch version, along with the ability to take this lengthy game on the go truly do make it the definitive way to experience the game.