It’s been a long time coming for fans of Dragon Quest but after 13 years we finally have the next numbered entry in this long running series on a home console. Dragon Quest 11 remains true to what made the previous entries in the series so widely loved. Resulting in a classic JRPG with great characters, set in a fantastic world with gorgeous presentation. While it’s not perfect it’s easy to say that it’s been worth the wait and will be a game Dragon Quest fans will fall in love with.

The first thing you’ll notice after booting up the game for the first time is how gorgeous it looks. The opening cinematic while pre-rendered is still a fantastic scene that sets the tone for the whole game really well. Akira Toriyama’s iconic character designs along with the vividly coloured environments are very pleasing on the eyes and remain interesting for the whole 100+ hour adventure. 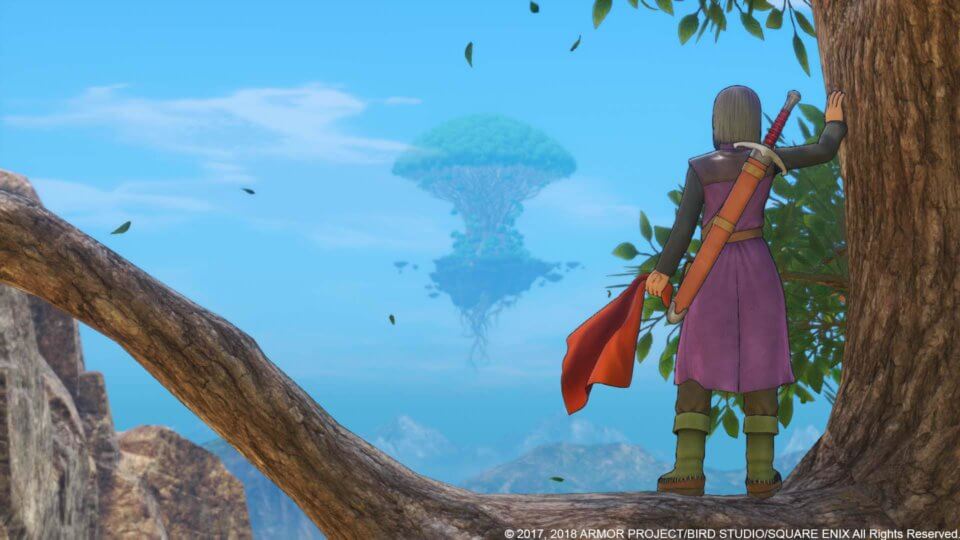 In Dragon Quest XI you play as a young boy who discovers he is the reincarnation of the Luminary, a being who is prophecised to be the one to destroy a predicted dark presence looming over the world. It’s hardly an original story, various pieces of media have used this same narrative framework. But Dragon Quest has never been about having a gripping story at it’s forefront. The thing that makes Dragon Quest so special are it’s moment to moment gameplay and it’s large cast of characters.

While the ‘eliminate the looming darkness threat’ is the main overarching plot of the game the full story is actually made up of many mini narratives. Each new town you visit along the journey normally raises a new set of tasks to complete or threat to eliminate and once those threads are tied up you’re on your way to the next town to meet more people while still working on your main quest as the Luminary. Not too dissimilar to the core structure of the Pokemon anime, it’s established early on that Ash will take on the Pokemon League but he must travel through many cities on his path to do so, learning and helping the townspeople on his way. 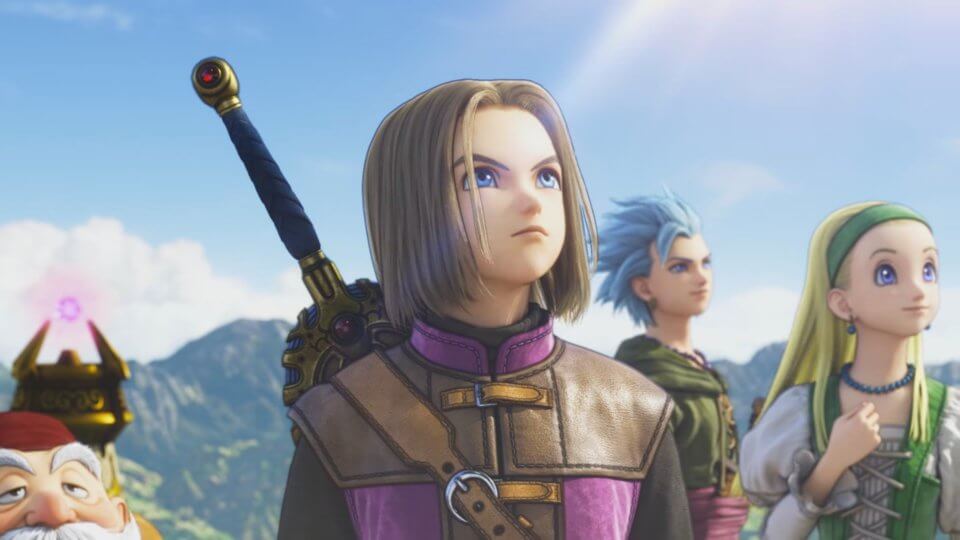 The game isn’t quite an open world but is made up of numerous sections and cities that on their own are quite large, still giving you the ability to explore it’s various zones.
There are often rewards granted for this exploration too. Investigating off the main quest path will often reveal side roads or hidden area’s that more often than not lead to a treasure chest containing some really helpful loot.

The vast number of interesting characters and the visually unique towns form a world I want to keep returning to and will likely continue to do just that. Chipping away at the enormous list of side tasks when not playing another game for review. The main story lasts 50-60 hours and as expected with a story that long it does have some pacing problems at times. Thankfully the moment to moment adventuring, battling and loot exploration keeps the game being fun to play at all times. 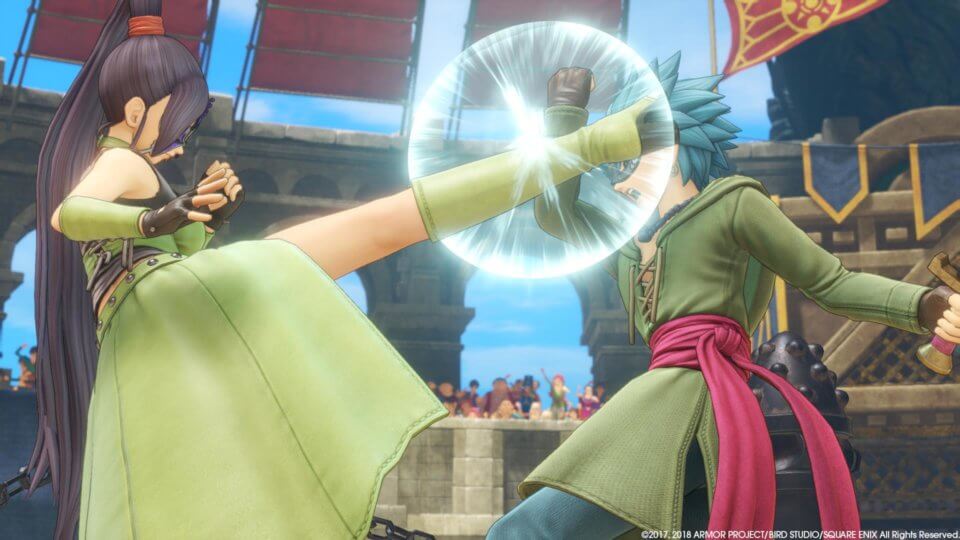 Dragon Quest XI has moved away from random enemy encounters and instead you can see enemies on the map and initiate battle with them by walking over and striking them, or being attacked by them if you’re not paying attention. Similar to how combat is started in the Persona series. This allows you to sneak up on an enemy and strike them to begin battle, granting you a slight advantage if you pull it off. It also allows you to evade enemies that you may think are currently too strong or you just don’t feel like fighting. As the game allows you to pick your battles.

Fighting every enemy you come across can quickly lead to being over levelled which leads to the game having little to no challenge until the next big encounter. But alternatively not spending enough time clearing out enemies, gaining experience and loot items can have the opposite affect.

During battles you can have a party of 4 in combat and you can choose to manually control all members of the party or have the computer methodically choose the actions of the characters using the ‘tactics system’ which can be turned off or modified at any point during combat. This is what I turned on after a while, allowing me to just control my main character and having the rest of the party be auto managed. 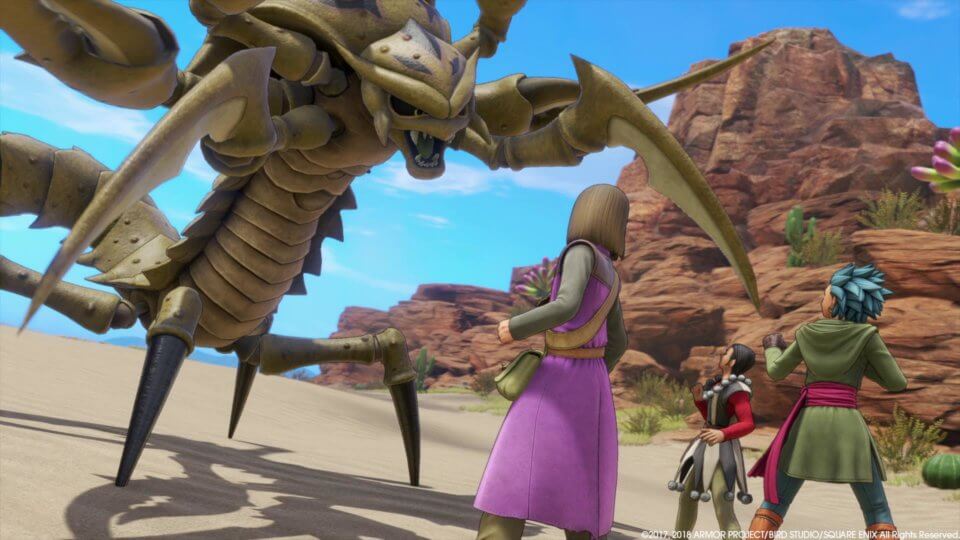 Bosses in the game do require more focus to beat than the regular foes you’ll be continuously slaying while adventuring across the world. You’ll need to analyse the bosses strengths and weaknesses and use your parties attacks and magic abilities at the right time to come out victorious. A couple of wrong moves can easily see your party wiped out, forcing you to have to redo the battle over. This isn’t to say that the bosses in the game are insanely difficult but do require more skill to beat compared with the standard enemies that you can mindlessly grind through with minimal challenge if you have allocated yours skills well enough and are at an appropriate level.

The western localisation of the game has been handled with great care with many of the jokes being tweaked and tailored for an English speaking audience. Most of the dialogue in the game is fully voiced too. Scenes primarily focused on the main cast or key story moments benefit from being fully dubbed. While travelling the map talking to secondary npc’s is presented as text based on screen dialogue.

If you haven’t played a Dragon Quest title before or think you’ll be lost because you didn’t play Dragon Quest 1 through 9 don’t fret. Dragon Quest XI is a great jumping on point for people who haven’t played a any previous games in the series before. Much like the Final Fantasy series, many of the Quest games are self contained experiences with their own cast of characters and story lines. There are minor elements such as spells, items and enemy types that are staples across many of the titles but not picking up on these smaller references won’t hinder your experience with Dragon Quest XI. 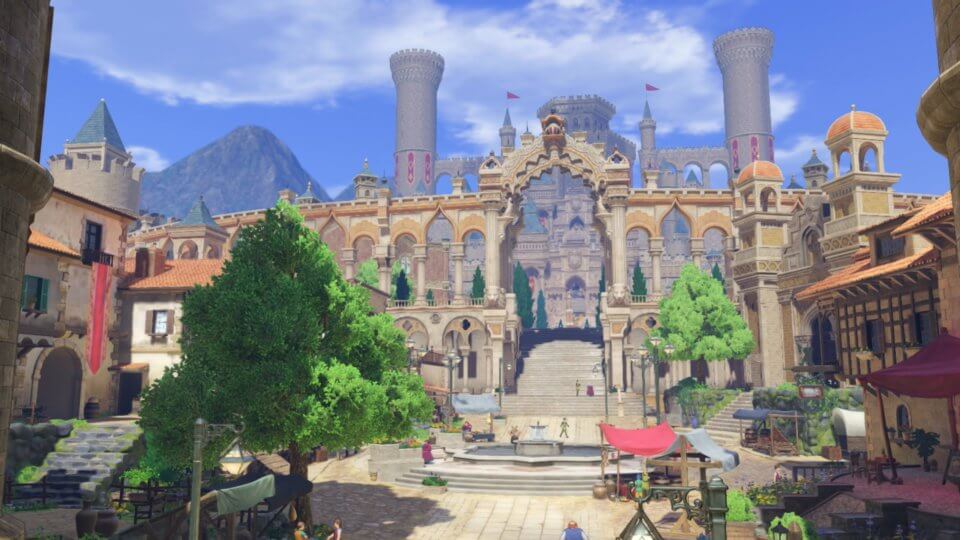 Whether you’re a newcomer to the Dragon Quest series or a series veteran, as long as you like classic JRPG’s there is a lot to love about Dragon Quest XI. You can’t deny the amount of gameplay value on offer here, taking over 100 hours to see everything the game has in store. And after spending time in it’s world and colourful characters, you’ll feel like you want to willingly complete all of the side quests. The story does have patches where the pacing is on the slow side and the combat can become unbalanced as there’s nothing stopping you from becoming over levelled for an area as enemy strength doesn’t scale but these are minor annoyances for a game that is incredibly enjoyable overall.