When it comes to first person shooters, there really isn’t anyone who knows the genre more than id Software. After being recognised as one of the key pioneers of the genre after the release of the original DOOM back in 1993, id have continued to lead the genre with each ongoing release, constantly evolving how we see first person shooters. Even though there are no shortage of developers releasing shooters these days, there are none that feel better to play and run as buttery smooth as those developed by id Software and that rings true here again with DOOM Eternal.

After the DOOM series received a reboot in 2016 to critical acclaim, there was clearly going to be high expectations for the follow up game. I was so glad to see that DOOM Eternal continued to expand on the groundwork laid in the reboot and didn’t just produce a bunch of new levels filled with demons to tear and ship out another title just to capitalise on the success of the previous title. Eternal feels like a worthy successor and evolution of the 2016 game by including an intriguing story, brand new enemy types, weapons and a unique change-up when it comes to the game’s multiplayer component.

At it’s core, it’s hard to describe DOOM Eternal as anything other than pure joy. The game plays just as buttery smooth as you’d expect and is packed full of the frantic, faced paced and silky smooth combat DOOM is known for. Eternal’s guns have a real sense of weight to them and a high level of care has been taken when it comes to their sound design, perfectly unleashing satisfying metallic crunches and futuristic blast with every round fired. 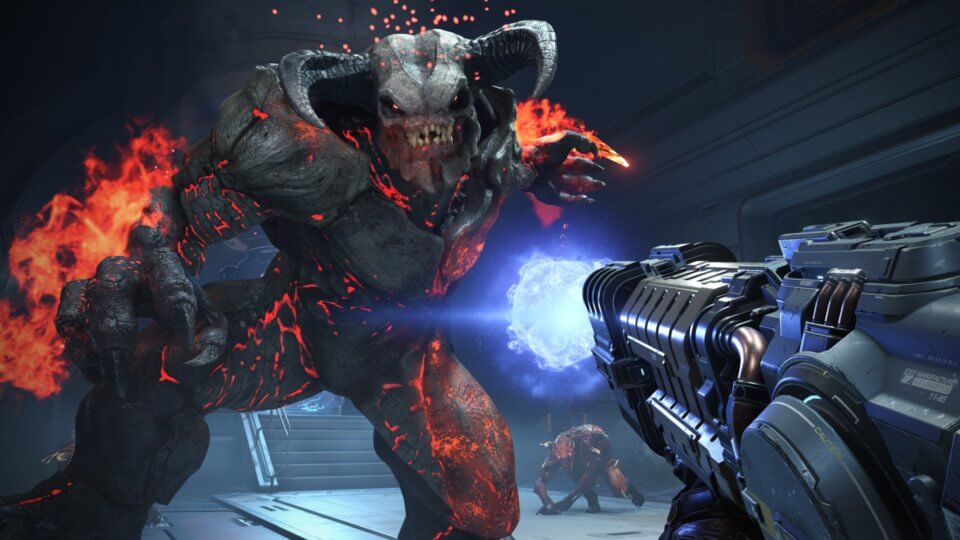 For fans that have played the 2016 reboot, it doesn’t take long to start seeing where Eternal has expanded it systems compared to it’s predecessor. For example, Glory Kills in the reboot would randomly grant you health, ammunition or armour when performed, but that system has now been overhauled in Eternal. Glory Kills with now present you with health pickups, chainsawing through enemies will grant you more ammo and burning your enemies with the flamethrower results in an armour drop. This does take away some of the risk/reward system I came to love in 2016’s DOOM which would draw me out from hiding when health or ammunition was low just for a chance that I would be rewarded with just the drop I needed. But I do like that DOOM Eternal now allows you to self manage what kind of drop you need at any given time and let’s you know exactly what you need to do to get it so that you can stock up and keep slaying.

I did briefly touch on the game’s sound design but one component of DOOM Eternal that further immerses you in a demon filled hell is it’s soundtrack. Aussie composer Mick Gordon is back with another score full of bass, drop tuned guitars and even an orchestra composed of heavy metal vocalists delivering one of the heaviest and energetic soundtracks in a video game. There really is nothing better to listen to while ripping and tearing through hordes of demons in the underworld. 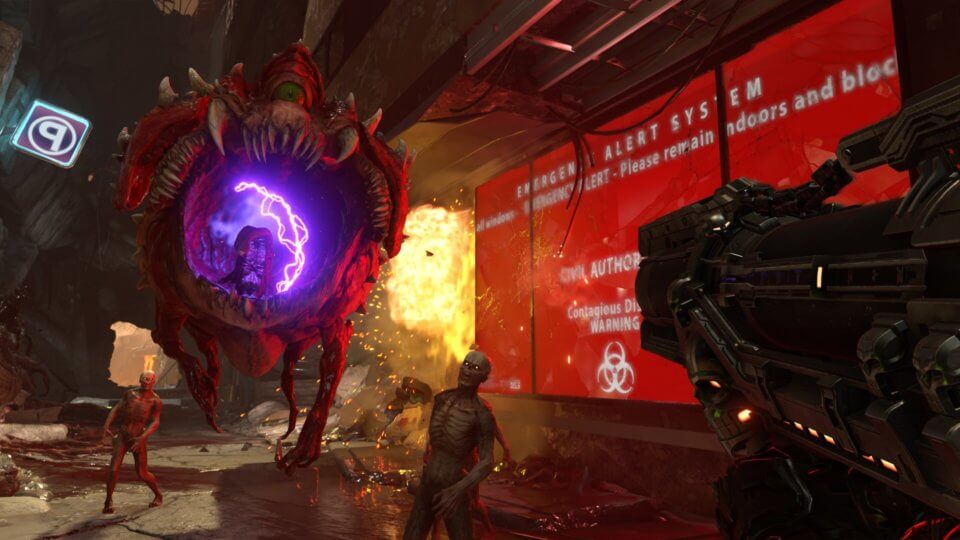 As you’d probably expect, many of DOOM Eternal’s combat sequences quickly evolve into crazy paced chaos. But even within these moments the game is more than just a spray and pray gore-fest, it actually forces you to inject a fair amount of strategy into your battle approach by often throwing higher level enemies types into the mix. Enemies that each have their own weaknesses or weapon types that will deal more damage to them if you manage to time things correctly or hit the right spots on their body for example. I loved this approach not only to the enemy design but also to the combat design of DOOM Eternal’s stages. It not only kept me on my toes at all times, keeping things interesting by not allowing all of the combat to become repetitive spray fests, it also had me constantly changing my weapon loadout during combat, forcing me to utilise the game’s full catalogue of weapons. Weapons which also have a layer of personal customisation applied via the modifications system that allows you to find and purchase add-ons for your weapons that change things such as fire-rate or implementing secondary firing modes.

The story isn’t typically what I play a DOOM game for, but unexpectedly the main plot of DOOM Eternal is also surprisingly good and engaging. Players may have varying experiences when it comes to the game’s full tale as there is quite a lot of world lore, character data and information kept purely to the in-game story codex logs. These are accessed via the game’s menu and some can be fairly lengthy walls of text. If you are a player that doesn’t mind a bit of reading, there’s a lot of extra juicy lore kept within these logs you’ll completely miss by not reading through them. I would have loved for some (if not most actually) to have been included within the main story as additional cutscenes or flashback sequences as they certainly do take away from the fast paced action and excitement of the rest of the game. 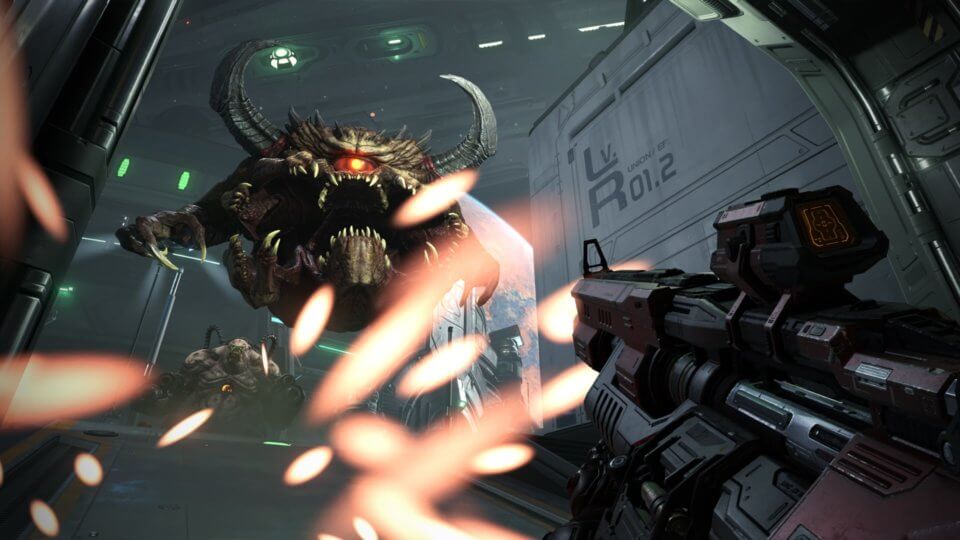 DOOM Eternal also comes packed with value for those gamers that like to get the most bang for their buck. The main campaign alone will take you anywhere between 15-20 hours to complete, depending on how long you spend collecting side content or repetitively trying the occasionally frustratingly difficult platforming puzzles of the game. Even after completing it, it’s still worth another playthrough to locate the secrets and collectibles you may have missed the first time through and of course there’s also hours of enjoyment to be had in DOOM Eternal’s multiplayer battle mode. A new 2v1 mode where you can play as either the Slayer of the Demons in a competitive multiplayer gauntlet. 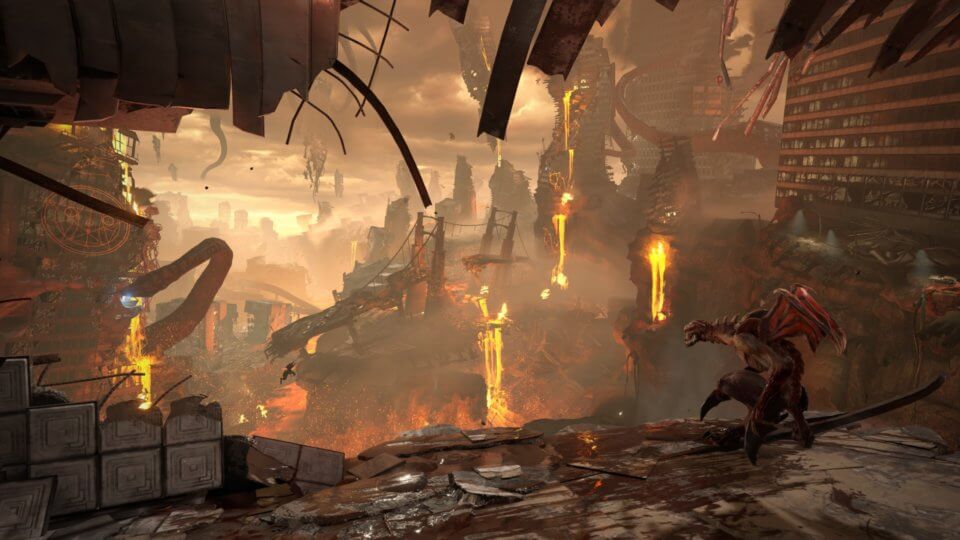 DOOM Eternal is the perfect example of a great video game sequel. It remains true to what makes the series great, but knows where to implement new tweaks to it’s systems to keep things fresh and interesting. The combination of it’s fast paced combat, satisfying weapons and fantastic musical score makes it one of the most rewarding games of recent years and continues to be fun even on consecutive playthroughs. If the series does receive a third entry I would love to see a slight changeup to both it’s platforming sections and it’s story telling, but even with things the way they are, DOOM Eternal is still one of the best first person shooter games on the market now.