Even if you’re a casual anime fan, it’s highly likely that you’ve heard of the massively popular phenomenon that is Demon Slayer over the past couple of years. Despite having a relatively small number of episodes, it’s story and characters have attracted millions of fans the world over. It’s first feature film, Mugen Train even went on to become the highest grossing anime and Japanese film of all time when it released in 2020. It was just a matter of time until Demon Slayer got the video game treatment. And I’m actually surprised it took this long. But now Demon Slayer -Kimetsu no Yaiba- The Hinokami Chronicles is here and the team at Cyberconnect2 were the perfect ones to deliver it. Known for their work on the many Naruto: Ultimate Ninja Storm games, they’ve taken their skills and systems developed over the years to deliver a fun, flashy Demon Slayer game that I’m sure won’t be the last we see. 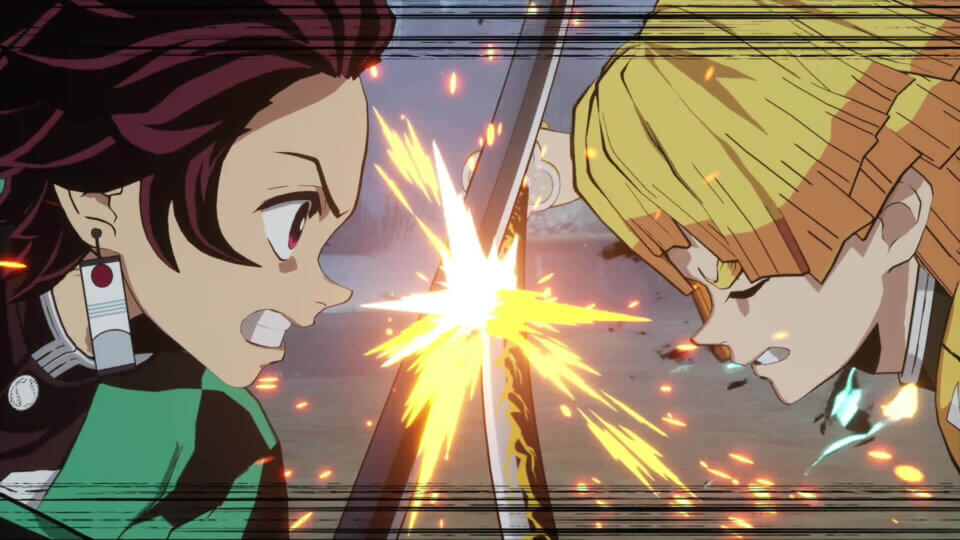 The Hinokami Chronicles is an arena fighter game that contains a faithful retelling of Demon Slayer’s first season and the Mugen Train arc that features in the series’ first film. While it’s not a complete beat for beat retelling of the series, it does include many of the key plot points from the show, presented in very nicely animated cutscenes and most of the core combat encounters seen so far in the series. If you’ve never seen Demon Slayer before, the game is a fine jumping in point. You will be missing out on some key character conversations, back stories and some of the worldbuilding but you won’t feel absolutely lost. While the core missions of the game bounce from key event to key event, you can discover and unlock numerous memory fragments that can be viewed in the memories menu that will fill in many of the gaps.

Without spoiling too much, the story follows Tanjiro Kamado on his quest to join the Demon Slayer Corps to slay and research demons in the attempt to return his sister Nezuko back into a human after she was attacked and turned into a demon during an attack that slayed Tanjiro’s remaining family. Much like the anime, the story kicks off with a tragic opening that provides the player some context on Tanjiro’s backstory and overall ambitions which allows us to empathise with the character more during his constant uphill battle to inch closer to his goal in a world that is full of concepts and creatures very unfamiliar to him.

The game itself is very visually impressive and flashy. If you’ve played any of the Naruto Ninja Storm games, you’ll know the Cyberconnect2 know how to create a great fighting game that faithfully recreates the art direction of it’s source series and can adapt the visually chaotic fights and supernatural abilities via their well animated cutscenes. The Hinokami Chronicles is no different in this regard, whether you’ve seen Demon Slayer in the past or not, you’ll have a blast witnessing the story, it’s characters and world in the game’s adventure mode.

Hinokami Chronicle’s adventure mode is where you’ll be playing through the main story and witnessing the memory fragments that allow you to view some of the story’s finer details. Between the main fight chapters, the game occasionally allows you to adventure through the series’ various locations employing an action-adventure style journey in the levels. Here you can move through the locations, discover some hidden collectibles and occasionally even speak to NPC’s but I often found these areas to feel empty and void of interesting things to do, and many of the exploration parts feel a bit like filler used to pad out the main battles we get to experience in adventure mode. If we do get a sequel to the game, this is one key area I’d love to see Cyberconnect2 fully overhaul.

Outside of the adventure mode, The Hinokami Chronicles also features a versus mode where you can pit any of the 18 available fighters against each either either offline or online against others. This is a great place to try out new characters against a computer opponent and get to learn how they differ to others and their individual pros and cons.

Much like characters in the Ninja Storm games, each character in The Hinokami Chronicles is capable of the same move set. Each character has a light and heavy attack, the ability to dash, guard, parry and shove your opponent. And the thing that really sets each apart, their own skills, Ultimate Art and surge abilities. The button inputs to perform these abilities are universal across the game so there’s no button combinations to learn for each character that will unleash their abilities like you’d see in Tekken or Mortal Kombat, but there’s still a layer of strategy that can be employed and a learning curve for each character as they individually differer when it comes to things like movement speed, reach and the abilities of their Ultimate Arts. 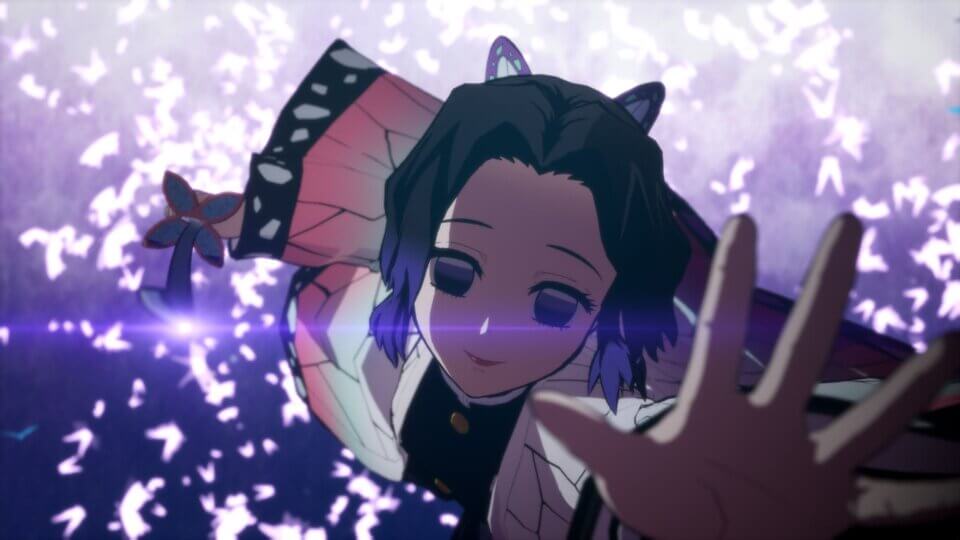 The gameplay is very fast in The Hinokami Chronicles. Due to the sheer devastation of the special skills and Ultimate Arts, the rounds in the game tend to be over relatively quickly. This makes the online mode especially competitive as just a few wrong moves can see you quickly defeated, but also allows you to turn the tide on your opponent when things may not have been going well for yourself too and come back with a win.

The Hinokami Chronicle’s launch roster in comparison to the Ninja Storm series Cyberconnect2 previously worked on is a little thin, with some of the 18 characters currently on offer being variations of the same character. While this does obviously provide less characters to learn and perfect, the characters themselves to feel quite diverse in playstyle and have their own perks and detractors that you’ll spend plenty of time getting to know. This is quite clearly because so far, the Demon Slayer series contains a relatively small number of key characters in comparison to other Shonen series that feature hundreds. The team have confirmed at least another 6 fighters will be coming to the game in post release updates, so the roster will be expanding. And it seems the play styles could be further expanded with the confirmation of playable demon characters coming too.

I was glad to see that the game is also mostly fully voiced too, featuring both the official English and Japanese voice actors from the series coming back to reprise their roles. English tracks are fairly rare when it comes to western anime game releases and typically feature in the biggest of franchises, such as Naruto and Dragon Ball Z, so it was great to see it implemented here and also acts as a sign of confidence from the publisher to go through the additional effort. 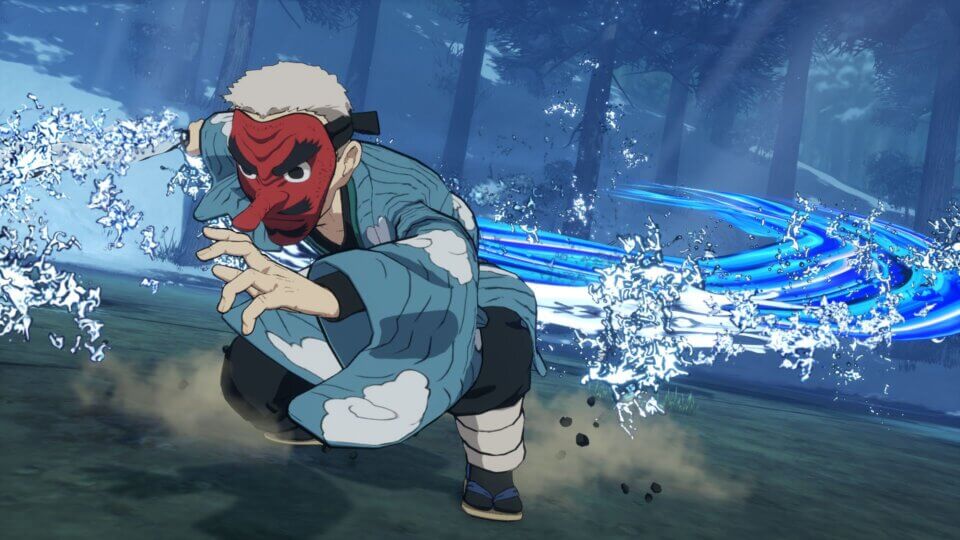 Overall, Demon Slayer -Kimetsu no Yaiba- The Hinokami Chronicles is a pretty great first video game entry for the Demon Slayer series. While it’s exploration and roster is a little thin, it’s presentation of the story and it’s flashy, engaging combat had me addicted to both it’s main adventure and online modes. I’m interested to see how the game expands and is balanced over time with new fighters continuing to be added in post release updates, but most of all I’m interested to see what features and tweaks can be implemented in a sequel. If the Naruto Ninja Storm series is anything to go by, Cyberconnect2 know what they’re doing with anime arena fighters and consistently implement feedback and new features into follow up games, and I hope Demon Slayer gets the ability to see that too.