Ever since it release earlier in the year, Death’s Door has been the talk of many gaming circles I find myself in due to it’s surprised critical acclaim and it’s overall design. I’ve seen a number of outlets include the game within their game of the year shortlist, so I knew I had to give it a shot as soon as I got the chance. And there’s no better time than now as it’s hitting a bunch of new platforms. After releasing earlier in the year on PC and the Xbox platforms, now Death’s Door is coming to PS4, PS5 and Nintendo Switch and after playing it, I can definitely confirm that all of the acclaim they game’s received is earned. 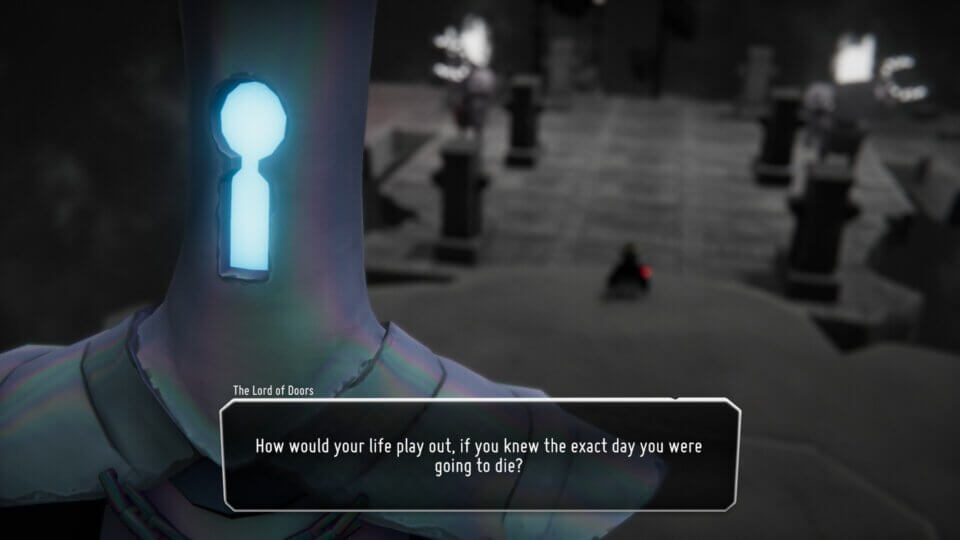 In Death’s Door you play as a really cute crow who works as a soul collecting reaper. While it sounds like quite the exciting job, it’s presented as quite the opposite as it seems working for the Reaping Commission Headquarters actually appears fairly mundane. But after you’re sent to collect a prized soul, you suddenly have it stolen by another crow before your eyes and then you’re further tasked with collecting the souls of 3 giants so that you’ll have the components required to open the titular Death’s Door.

Death’s Door is an action adventure title that primarily utilises an isometric presentation. I really loved both the look and the feel of the game and in this style of game, I think the isometric view really helps show off a lot of the world, gives you plenty of room to dodge and move around when it comes to combat encounters and simultaneously allows the room for discovery of the game’s hidden areas and puzzle solutions. 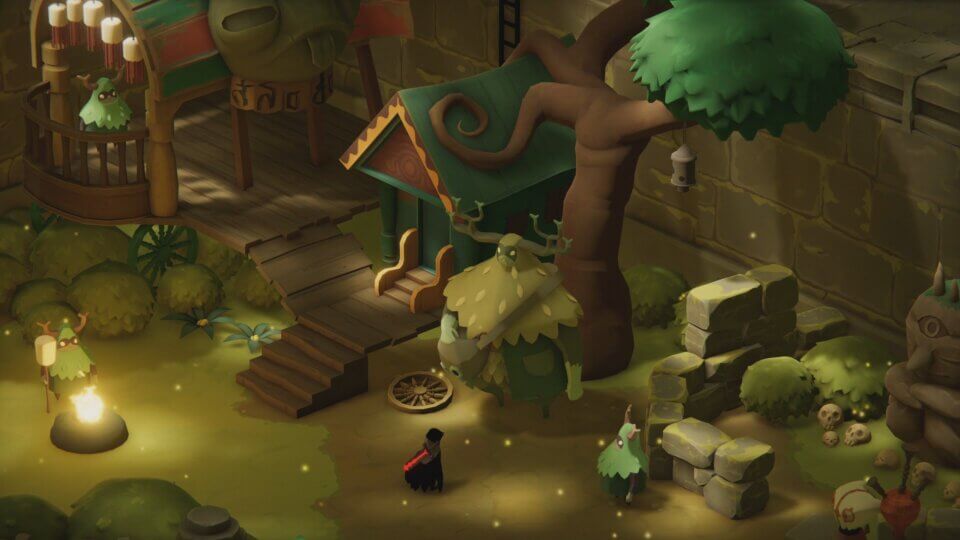 The game’s story and world is developed primarily via the environment and collectibles but there are some key moments where you’ll engage in dialogue with other characters and creatures. Many of these interactions make up the bulk of the exposition and character development and I loved how different and quirky each of the characters you interacted with were. There isn’t a lot of time spent fleshing out deep backstories and motivations for everyone in the world but they do a great job at bringing an element of comedy into the game and provide a nice richness to the overall experience.

The games visuals are a real treat to look at, with Death’s Door featuring a number of varied biomes to explore which prevents the grim setting of the game from feeling all the same. But given the subject matter, I was pleasantly surprised with how beautiful the game looks. With many of the locations featuring environments and characters made up of quite vibrant colours & designs and lit in a way that also guides the player through each of the stages and provides another layer of beauty to the world.

The puzzles located within the levels aren’t overly difficult but do provide that rewarding sense of accomplishment when you do manage to find and complete them, not too dissimilar from a Mario or Zelda title, a game which Death’s Door clearly takes a lot of inspiration from. 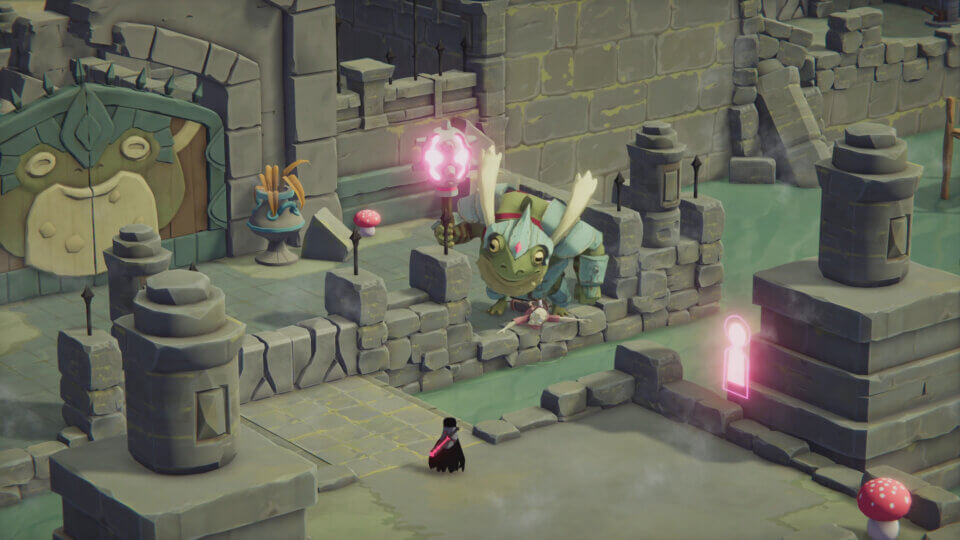 Between the puzzle solving and adventuring you’ll also be partaking in quite a bit of combat and Death’s Door’s combat system is simple and effective, featuring a light and heavy attack along with a dodge roll mechanic. While the actions available are simple, a further layer of complexity and strategy comes with the numerous weapon types at your disposal. Weapons such as your standard sword, daggers, even an umbrella among others, each coming with their own damage, range and attack time stats to learn and master. Ranged attacks can also be used via bows and spells, but it’s a system balanced by forcing you to perform melee attacks to replenish the ranged attack gauge slots preventing you from just picking enemies off from afar by spamming magic abilities and arrows.

Death’s Door also features an easy to understand skill progression system. You’re able to tweak your character’s skills by spending collected souls back in the game’s hub area to provide permanent increases to attributes like strength, dexterity, haste etc, allowing you to further build out the character to your own personal preferences. If you prefer to deal more damage with some mighty swings, levelling up your strength skill could be beneficial, but if you want to play a bit more strategically and have a faster dodge ability and overall speed then levelling up haste may be better for you.

The soundtrack is downright awesome. It contains everything I look for in a great soundtrack, not only in games but really any OST, diversity of sound. The tracks are used expertly to enhance the kind of scenes they’re played in. Adding further depth in slower, exploration based segments with more peaceful and somber tracks but ramping up to some high energy tracks during the game’s more intense combat and boss encounters. 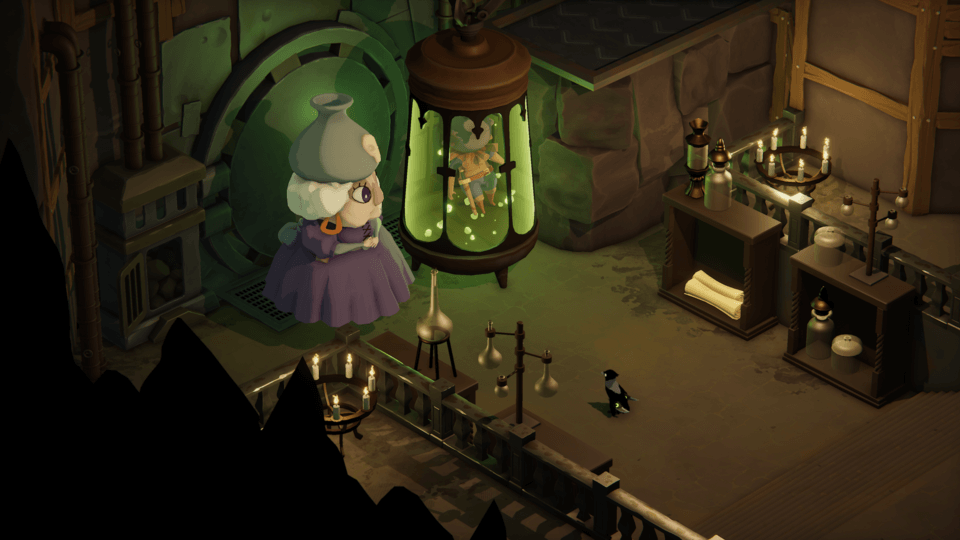 These aforementioned bosses are well designed and provide quite the challenge to overcome. Their encounters are varied and require you to learn their specific attack patterns, best times to attack and their weaknesses to succeed in defeating them. While I typically struggled to best them on my first try, after learning from my past mistakes and coming up with better strategies I was able to defeat them which always felt quite rewarding.

I played through Death’s Door for review on the PS5 and loved their implementation of the DualSense features. The haptic feedback allows you to feel the attacks and shaking scale of the enemies and the adaptive triggers have also been used to add resistance when performing bow and magic abilities. I really appreciate when developers take the time to utilise the features of Sony’s latest controller as it really does add to the overall immersion and feel of so many games.

Death’s Door absolutely deserves all of the praise I’ve been hearing about over the last few months. It’s a gorgeous game that has an interesting premise and is really well paced, allowing you to complete the main story in around 8 hours and not overstaying it’s welcome at any point. Now that it’s on more platforms than ever, you really have no reason not to check it out. Death’s Door can certainly stand alongside any of the biggest games of the year when it comes to overall fun and quality and will no doubt win plenty of awards as we head into awards season.

A PS5 review code was provided for the purpose of the review.