After being revealed during Nintendo’s E3 showing in 2018, Daemon X Machina caught the attention of many people when it showed of it’s fast paced mech shooter gameplay. I remember being instantly interested, being an anime fan, it looked like it could be the Gundam or Code Geass game I’d always wanted. But although the mech gameplay is a lot of fun and it feels great to play, the experience is let down by a convoluted story and characters I failed to gain attachment to. 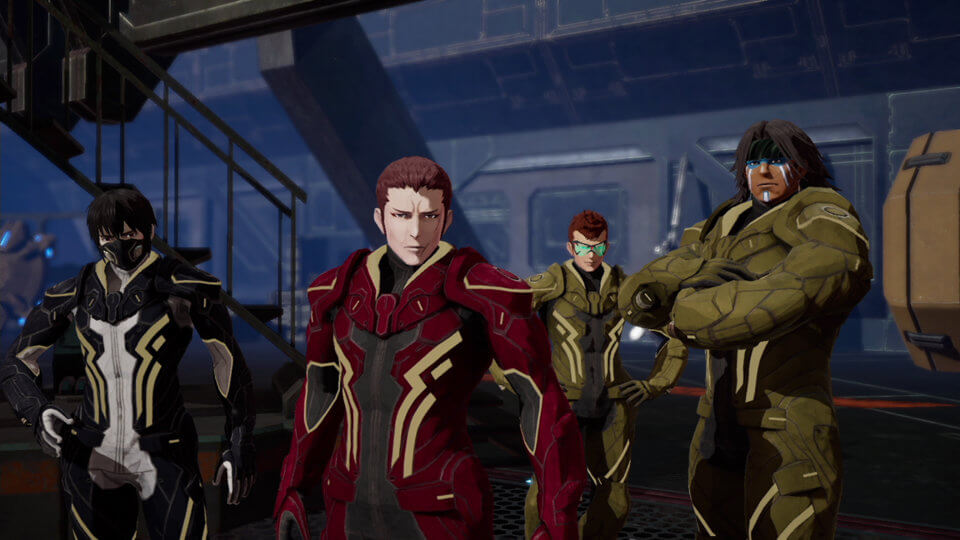 After a piece of the moon collides with the planet, resulting in a cataclysmic apocalypse, it corrupts artificial intelligence driven creations causing them to turn against humanity. Now it’s up to an organisation called Orbital to fight back against these ‘Immortal’ enemies using their own mechanised combat robots called Arsenals to restore peace once more.

Based on that setup, this story has just about everything I love. Mechs, cosmic threats, large casts of characters all presented with an eye catching anime art style. That’s why it was so disappointing to realise the main story is actually the weakest part of Daemon X Machina. While I normally love games or series’ with large casts of characters, Daemon X Machina throws them all at you at a lightening pace, giving you little time to work out who each are, their individual motivations and interests, their character quirks or anything of substance really. Sure there are some that have bigger parts to play in the story than others, but overall I felt like I only got a surface level relationship with all of them and would have appreciated a smaller cast where I’d develop meaningful relationships with just a few. And by having little attachment to the characters, it made it even harder to keep track of the game’s complex, twisting and convoluted story.

The game’s mission structure, while entertaining at first, begins to show some flaws the further you get into the game. Most main missions consist of eliminating all of the waves of generic enemies that appear within the stage. There is the occasional stealth or zone protection mission, but the typical structure begins to get quite repetitive the more you play.

The boss and mercenary stages however are the complete opposite though. They’re extremely fun, well thought out and the main enemies in these stages actually offer up a decent challenge. I would have loved if the game took a Shadow of the Colossus approach and consisted purely of boss battles, having me tweak the design of my Arsenal to suit each fight. If all of the missions had the same fun factor as these battles Daemon X Machina May have been something really special. 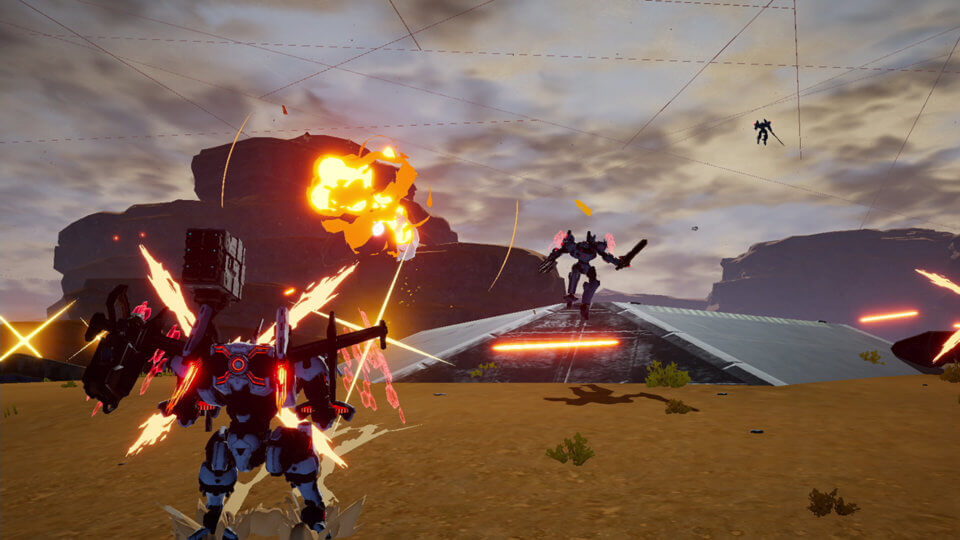 Thankfully there are a number of things that Daemon X Machina does nail. Visually the game looks great, it’s one of the first things you’ll notice when jumping into the game and manages to be attractive both on a TV and on the Switch’s handheld screen. The game’s Arsenals, characters and environments really pop on the screen, with the crisp art direction complemented by bright, vibrant colours in the stages, explosions and mech designs.

Daemon X Machina also feels great to play, the Arsenals handles with a sense of weight and moves through the air the way I would expect a bipedal weaponised robot would. The Arsenals are also well animated, moving through the air and unleashing attacks in ways that look both stylish and cool.

And speaking of weapons, your Arsenal can be decked out with an army’s worth. You’re able to equip your mech with 6 different weapons, each of which have their own damage output, bullet types and effective range and can be mounted onto your Arsenal’s arms or shoulders. 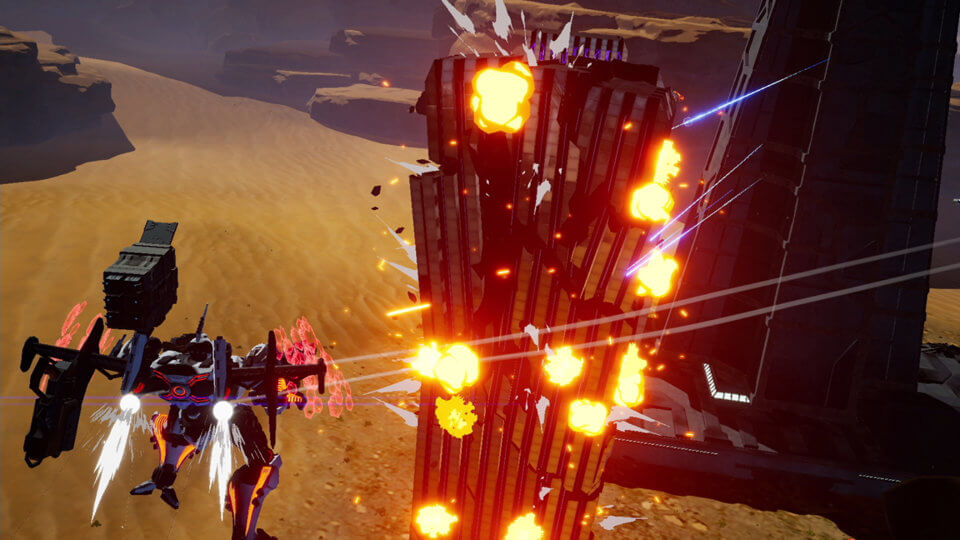 Upon completing missions you’ll earn in-game currency that can be spent at the shop. Here you can earn upgrades for your character and Arsenal and buy things like new heads, bodies, arms, legs, decals and weapons for your Arsenal.

Building and customising your own mech is like playing with a Lego set at times. Building on what you had before, or pulling off certain arms or cannons and replacing them with others that better suit the missions. Daemon X Machina offers a lot of customisation when it comes to ‘how’ you want to play. If you want to equip swords on your mech and defeat enemies up close and personal, you can do that. But if you prefer to blast them away from a distance using rocket launchers and riffles, that’s ok too.

But the customisation doesn’t end with your mech, from the start of the game you’ll also control the appearance of your player character too. The character customisation is deep, allowing you to hand pick and style and colour for each component of your character’s face and then add on your choice of hair, scars, tattoos, outfits and your characters voice. 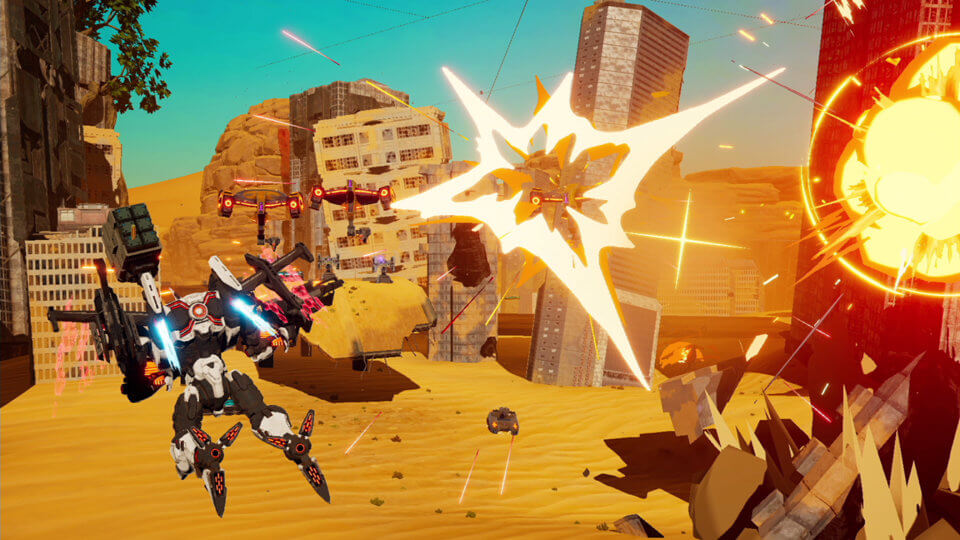 While the game is lacking in the storytelling department, it’s gameplay and customisation options make Daemon X Machina fun to play. With the deep mech customiser, you’re able to constantly tweak and upgrade your Arsenal so that it looks and performs exactly how you want it to and so that it matches your playstyle. If you’re not sure if the game is for you, you can try before you buy as the Nintendo Switch eShop features a playable demo that allows you to try out the first mission of the game for free. Daemon X Machina at times is really fun, I just wish that fun stuck around for the whole journey and was backed up by an engaging story. If we ever see a sequel game, I’d love for Marvelous to work on delivering that because then they’d be onto something great.