With many games these days going for quantity over quality and using grand open worlds as a selling point the phrase ‘open world fatigue’ is a very real thing. Thankfully Rage 2 is changing up the formula and bringing something interesting to the table. Being a title co-developed by Avalanche Studios and id Software the game takes the strengths from both studios and blends them together to create a true open world game that melds the vehicular and traversal mechanics Avalanche have come to be known for with the fast paced, buttery smooth gunplay we’ve come to expect from an id Software title. 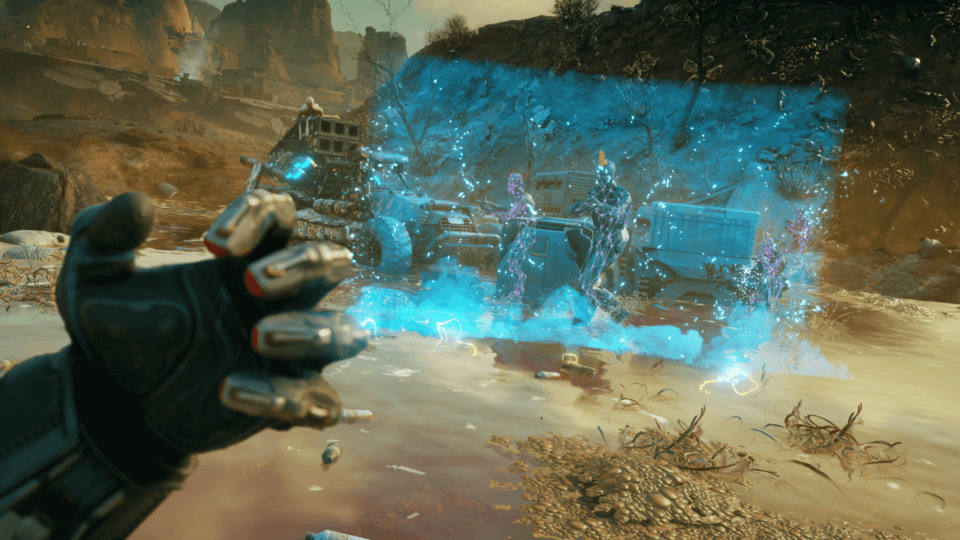 I recently got to go hands on with Rage 2 for a few hours and after getting to see some of it’s story, characters and varied mission types it’s cemented my thoughts I had of it when I got to get hands on with it last year at PAX Aus. It remains one of my most anticipated games of the year.

However this time when I got to go hands on with the game I wasn’t playing through a vertical slice E3 demo build. I was handed the controller and told I was free to travel through the game as I pleased. This would also be the first time seeing how travelling through the open world of Rage 2 would play as the PAX build featured a first person combat sequence only. 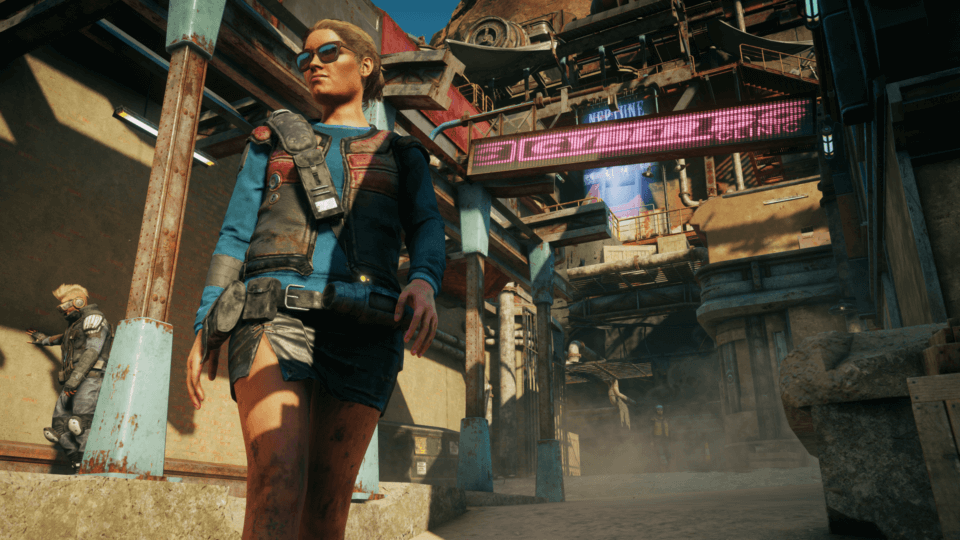 My time with Rage 2 began just outside a settlement that appears to be a main hub area of the game called Wellsprings. I was given the controller and told to go wild. But to see how the main game played and experience some of the story I decided to jump into the main questline of this demo titled ‘Wasteland Celebrity’.

This quest had me heading into Wellsprings and traversing a tall tower to locate Lossum Hagar, the current Mayor of the settlement. And while things weren’t friendly initially, after working together through an enemy firefight we began to work together. Hagar informs me of Klegg Clayton, ‘the richest asshole in town’ he’s the one managing the squads of bandits and goons infiltrating Wellsprings and trying to attack the Mayor. I’m tasked with getting close to Klegg Clayton to plant a ‘gizmo’ on his computer and steal his confidential data so that Hagar can find out who is backing him and supplying the equipment to the bandit squads and find out where he’s keeping supplies he stole from Hagar previously. 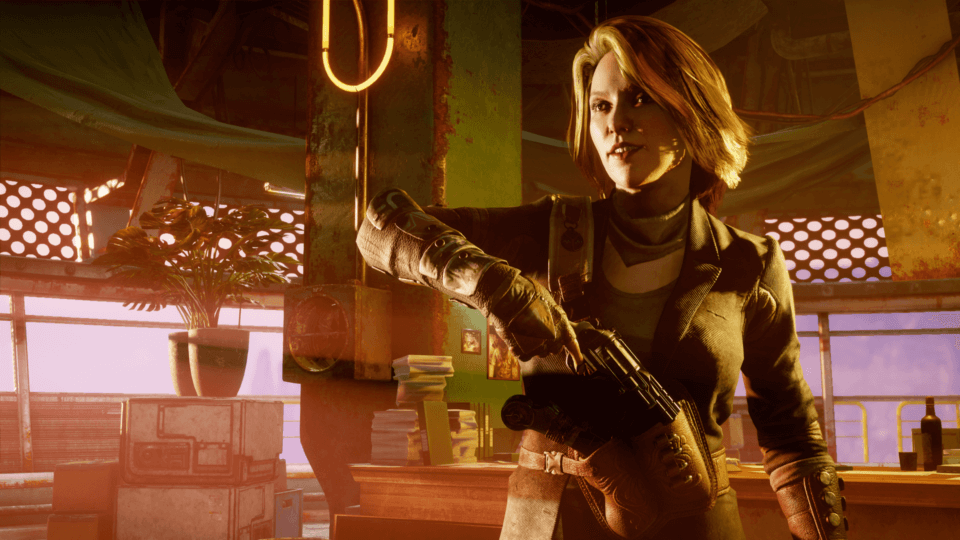 Seems simple enough, Clayton’s building in also in Wellspring but upon heading over I’m blocked by a guard that informs me Clayton will only speak with those that are rich or famous and since I’m neither I’m not getting in. The only way they’ll let me enter is if I become ‘the champ’ and to do so I needed to complete 2 mission objectives. I needed to make a name for myself by winning on ‘Mutant Bash TV’ a sadistic Hunger Games style TV show that the town watches where a person is sent into the ring and forced to face off against waves of enemies in 3 rounds of combat where the environments are just as dangerous as the enemies trying to claw your face off. And Win a race at the ChazCar Derby.

There are various types of vehicles available in Rage 2 and each feel slightly different to drive and may be equipped with different weapons, or sometimes none at all. You’ll find them out the front of settlements as well as scattered throughout the world, and you can even steal the enemies’ vehicles from them too. There are quick, lightweight buggies, beefier tank-like cars equipped with weapons and even a flying hover bike if you can find it.

Because the vehicles handled slightly differently I initially had a bit of trouble getting used to the car I was thrown in for the ChazCar Derby race. Thankfully it was a 2 lap race because at the end of the first lap I was well and truly in last place. I ended up slowly gaining on the rest of the pack and winning the race. I can’t tell if I got the hang on the driving by the second lap or the game was scripted let me win but either way I completed the race, was hailed the champ and set off to meet Clayton. 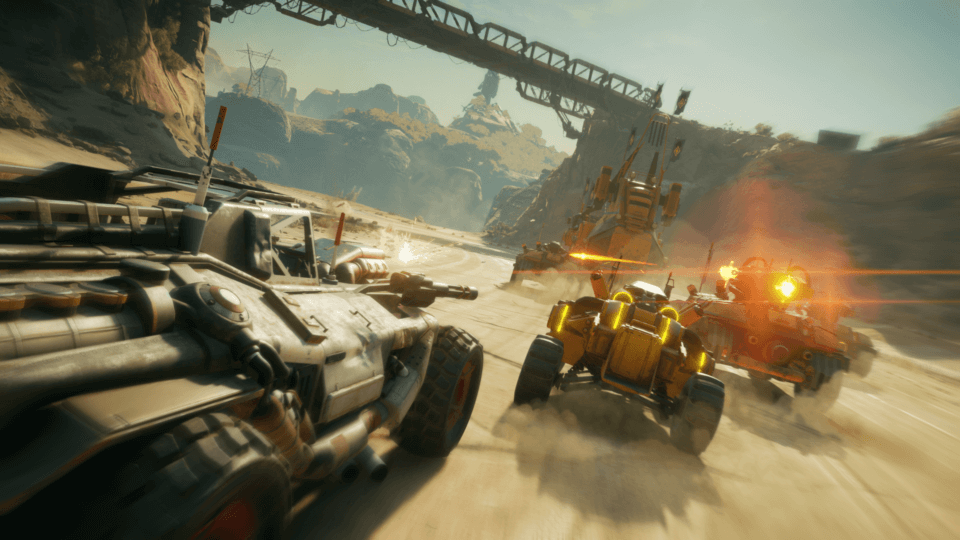 After a quick meet and greet with the town’s wealthiest slimeball I was able to attach the ‘gizmo’ to his computer completing the mission set out by Hagar and set off down the elevator to get out of there quick-smart. However Clayton was aware of the plan the whole time and take over the elevator and sending me down into his dungeon that houses a large rampaging mutant named Rukkus. Leading to a boss fight that I found quite difficult due to not having any health packs left at my disposal. But after a number of attempts I was able to best Rukkus and escape the complex and spent the rest of my time with the game just exploring the world and attempting some side activities.

And it’s these side activities that could keep you busy for a long time to come in the world of Rage 2. Much in the same vein as a Far Cry (or any recent Ubisoft title really) game the world map is filled with various icons indicating side events and activities to complete. And you’ll naturally stumble across many of these as you adventure through the wasteland between mission objectives. I found myself distracted a number of times when driving back to WellSprings, diverting slightly off the directed path to go and clear out a bandit camp or clear one of the ‘Road Chokers’, man made road blocks controlled by bandits that once defeated can be opened up allowing use of the road to access new areas. 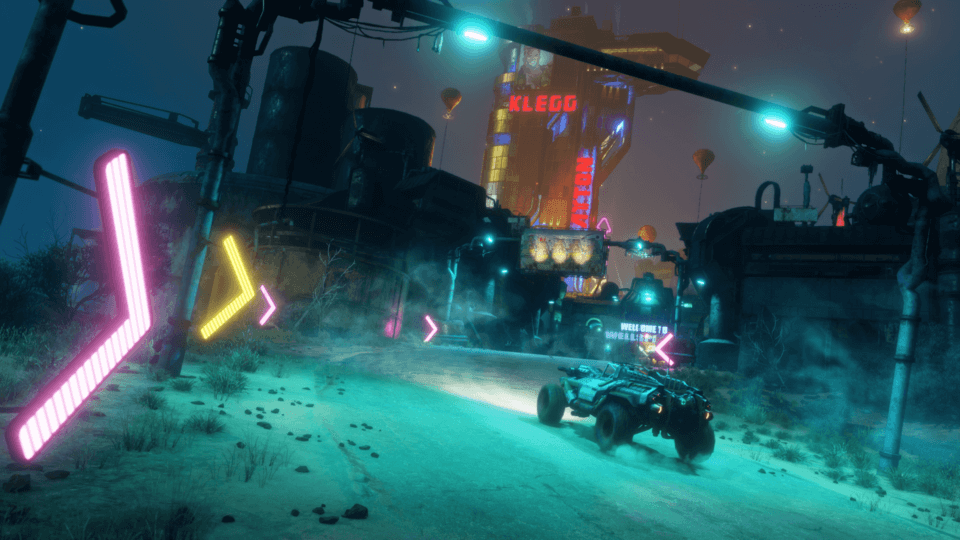 But that’s not all you’ll be doing to keep you busy. A quick look through the legend on the map revealed bandit camps, convoy and epic convoy missions, pit stops, road chokers, Mutant nests, head hunting missions and races to find and complete. It’s clear that id and Avalanche want you to have plenty to do in this world even after completing the main story of Rage 2.

As I mentioned in my initial preview from what I played at PAX, it was my favourite game I played at the show due to how good it’s first person gunplay felt and how well it nailed that signature id Software look & feel. I got to try out a few more weapons this time around that weren’t in the PAX demo and noticed that each of the weapons seem to have 2 combat modes. The pistol for instance will act like a regular semi-automatic pistol when fired from the hip. Aim down the sites though and the gun switches to a 3 round burst mode. The shotgun when sighted unleashes an energy pulse rather than a gore splattering shotgun round, still dealing damage but is effective at pushing back multiple enemies or causing a boss to stumble. 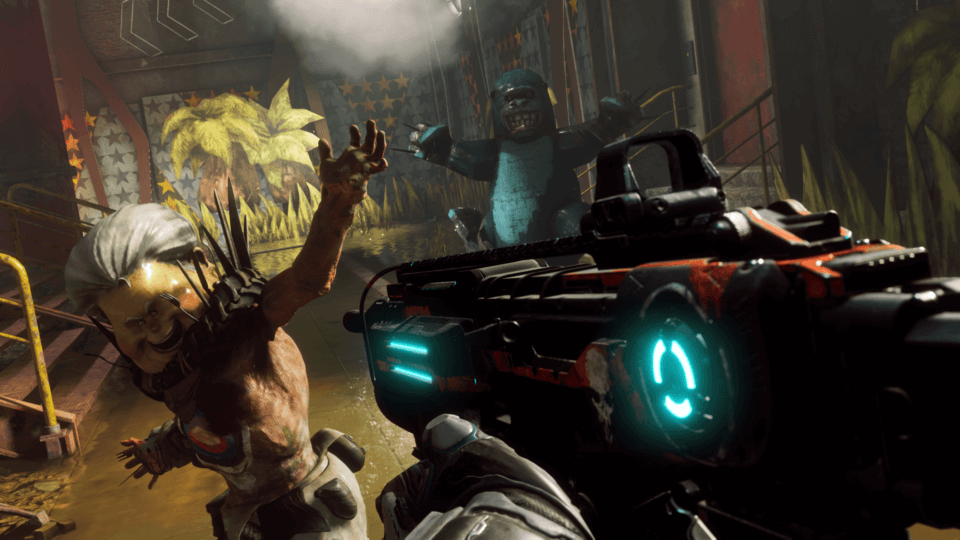 As mentioned earlier, this was the first I got to experience of the open world side of things too. When jumping into a vehicle the camera pulls back from first person and allows you to navigate the world in the vehicle in third person which allows you to see more of the environment coming up ahead of you in races and also allows you to see enemy convoys in the distance that are targeting you with their weapons and will do everything they can to blow you off the road. When that happens you better hope you can get out of there quick smart or that you’re in a vehicle also equipped with weapons to fight back.

After playing Rage 2 for a few hours I’m still just as keen for it to come out as I was after playing the smaller demo at PAX. It’s combat looks and feels silky smooth and it’s world is packed with things to do. Plus best of all it delivers on the promise of Rage 1, offering up a true open world this time around. The vehicles do take some getting used to but once you have it down pat you’ll be zooming through the various biomes Rage 2 has for you to explore. Gone are the completely brown and grey set pieces. In Rage 2 you’ll travel through forests, swamplands and even snowy fields. 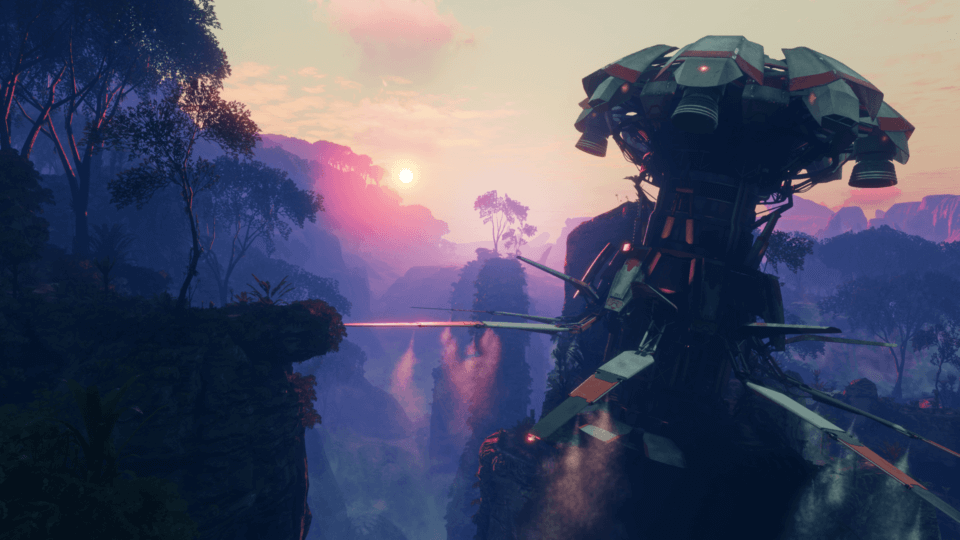 Rage 2 launches on May 14 for the PS4, PC and Xbox One. And based on what I’ve played so far I can’t wait to jump into this world some more, blast some mutants and just have fun!

If you want to learn more about Rage 2, you can check out my interview with id Software studio director Tim Willits below.

The Rage 2 build for this preview was played on PC using an Xbox One controller.

One thought on “Rage 2 Extended Hands On Preview”