There has been no shortage of great visual novel games recently. Just last week I reviewed AI: The Somnium Files, next week Raging Loop releases but here I’m going to talk about a visual novel that is very special to many people around the world and after it’s initial release, went on to inspire many science fiction visual novels including the game many consider synonymous with the genre, Steins;Gate. This review is all about YU-NO: A Girl Who Chants Love at the Bound of this World, which for the sake of simplicity will be referred to simply as YU-NO going forward. YU-NO is a visual novel adventure game that was originally released in Japan back in 1996 and went on to gather a lot of popularity here in the west. Although the only way it had been playable out here was via unofficial fan translation. That is until 5pb and Spike Chunsoft came along and decided to completely remake the game and give it an official English translation.

In YU-NO you play as Takuya Arima, a highschool boy that does what most highschool boys do and who is obsessed with the crude things many highschool boys are. Except his life quickly takes a turn from an ordinary one, to one that’s at the centre of a supernatural and time bending mystery.

After receiving a package from his father, someone who he’d believed had died months ago, Takuya becomes the owner of a device that allows him to travel to alternate parallel worlds. If you’re a fan of Steins;Gate, think of it as freely having the ability to jump between world lines. He’s also presented with a task in the note from his father, setting Takuya off on his quest to solve the mystery of his father’s status and prevent a reality wrecking event. But he can’t do it alone, he’ll need to lean on fellow students, friends and even his teachers, developing deeper relationships with each of them along the way to get it done.

Once the story kicks off, which to be honest does take a little while to kick into a higher gear, I found myself enjoying the narrative and had the drive to keep progressing because I love mystery games and really wanted to get to the bottom of what was really going on in this world. To work out what’s really going on in the town of Sakaimachi and uncover what your supposedly dead father is trying to tell you, you’ll need to use the Reflector Device to travel to various parallel timelines, replaying points of the story from a different perspective and making different decisions along the way.

The only way to see the game’s true ending is to complete all of the various routes, correctly building relationships with and romancing the girls in each path so that you can gather enough clues, evidence and items to solve the larger mystery. 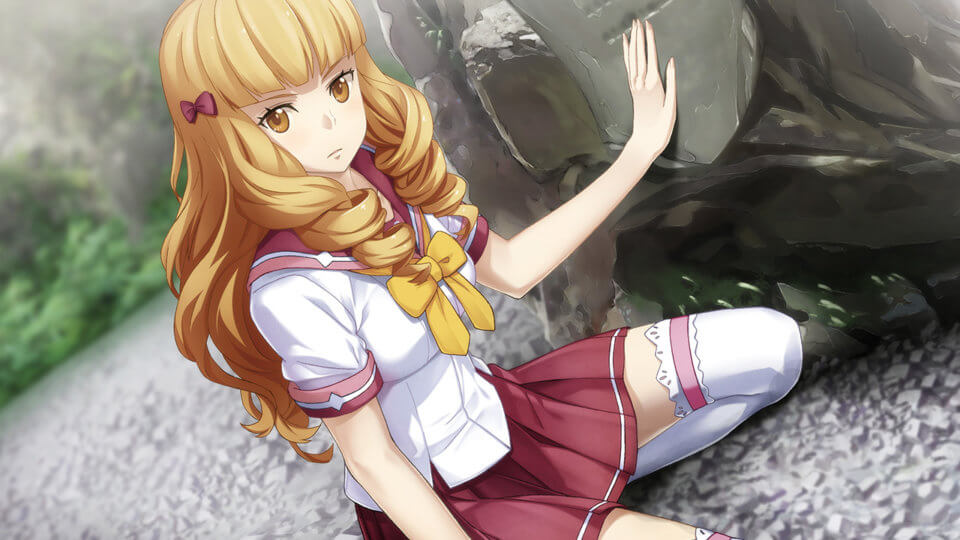 YU-NO features a system called A.D.M.S the Auto Divergence Mapping System, which from the menu will visually show you the various points at which the story diverged onto a new path. It also allows you to spend collected Jewels to go back in time to that point but on a different timeline so that you can proceed down a different path or make different decisions using knowledge you’ve gained by knowing how things play out based on a route already experienced. Playing through the game’s different routes isn’t just something that needs to be done if you want to put in the time to see the true ending though. Hoping around the timeline is something that needs to be done just to finish many of the routes due to many of them requiring items found in other routes to solve puzzles and progress deeper into the mystery.

When using the A.D.M.S to jump to different points in the game, the story, setting and memories of the characters get rewound but your collected inventory remains persistent. This allows Takuya to collect a key in one route and seemingly have no use for it until you stumble across its door 10 hours down the line and in another timeline and vice versa, you may stumble across the door and be unable to progress past it until you jump into another route and make the right choices to acquire the key. I liked this persistent inventory mechanic as it made an already interesting and twist filled adventure feel even more interconnected. 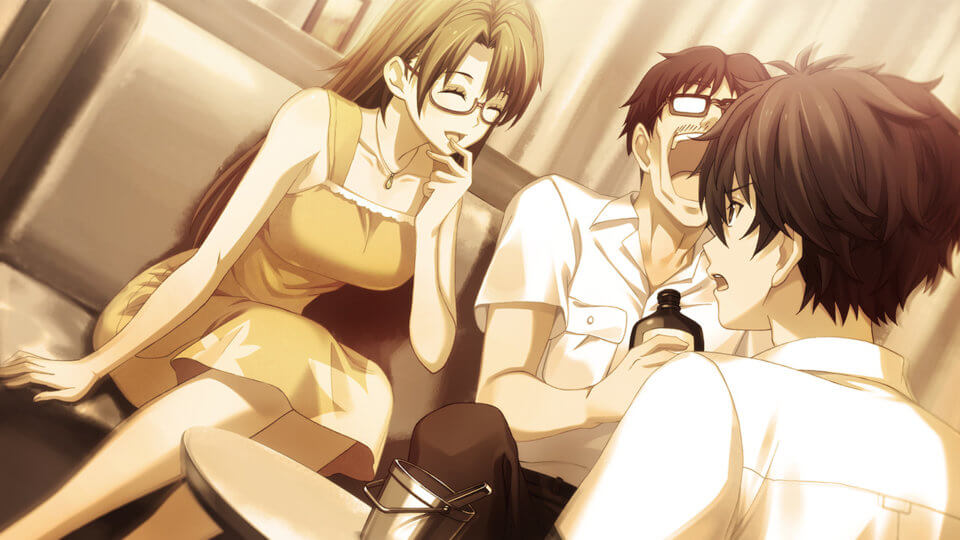 If you have played or know of the original YU-NO game, there is one key difference in this remake. With the original title being an eroge game, it was packed with some very adult situations that weren’t just limited to nudity and sex scenes. This remake stays true to the original’s story but no longer displays any of the sex scenes on-screen. The game doesn’t try to hide what is really going on, and the dialogue is still filled with lewd language and innuendos that push the title into the mature/adult age range, it just doesn’t push the eroge aspect of the game anymore.

As I did touch on earlier in this review, my main gripe with YU-NO is with it’s pacing and story delivery. The story itself is great, and once it gets going it will get it’s hooks in you. But it certainly takes some time to get going. The opening prologue of the game consists of many lengthy dialogue sequences designed to introduce a number of key characters in the game and while doing so, dumps a whole heap of character exposition and backstory on you for both the character you’re talking to and Takuya himself. This isn’t helped by the method in which the game allows you to advance the narrative. When speaking to a person, you’re presented with a mostly still image on the screen that has a number of action spots. These can range from the person’s face, hair, other body parts and things in the environment that allow you to look at or proceed to another area or leave the conversation. 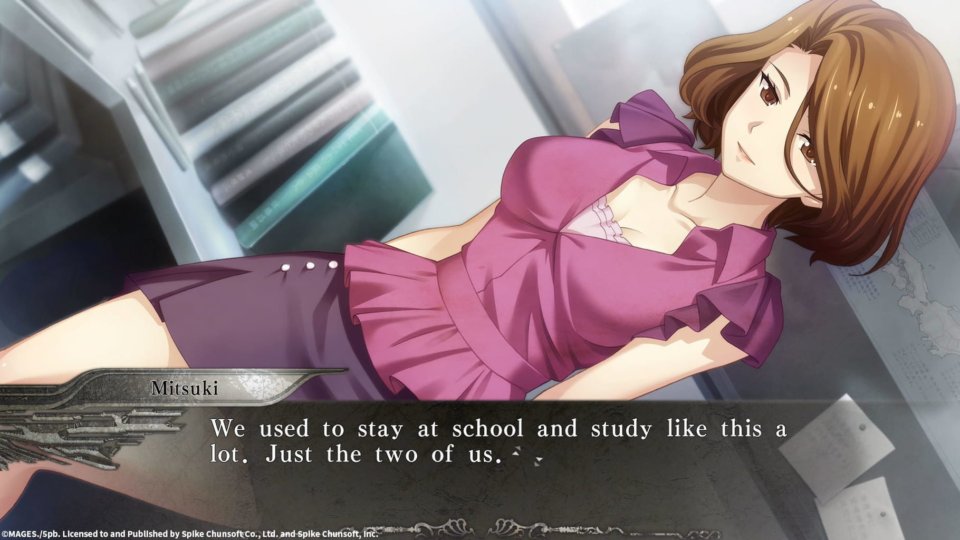 Normally the story is progressed by clicking on the person’s face, leading to a lengthy bit of dialogue between yourself and that character. But often when they stop speaking, you’re unable to progress the conversation until you check out another action point on the screen, often unrelated to the conversation, then click back on the character’s face to continue the next part of the conversation. I can understand this being used in scenes where things in the environment are used for context in the narrative and they can’t be spoken about until you’ve investigated them, but for many of the standard conversations I would have preferred all of the dialogue to be dumped in one continuous speech and then leave me to investigate the other action points in the scene if I wished as it not only broke up the dialogue at strange spots, it also slowed down the pacing of the scene.

When it comes to sound, I couldn’t fault the game’s soundtrack. The score suited the scenes very well and added deeper emotion to a lot of the game, whether that be the more light hearted tunes used in the school scenes or casually talking with other characters or the frightful heavier tracks used in the YU-NO’s dangerous scenes. You also have the option of listening to the game’s original soundtrack or a newly recomposed version made for this remake. Having good background music is a great thing to have in any game, but even more so when you’re going to be playing the game for over 40 hours. For the character dialogue, YU-NO’s story is voiced but the remake only offers a Japanese audio option, this didn’t phase me, as many games of this style rarely include an English option and I treat it as a bonus if they actually do. 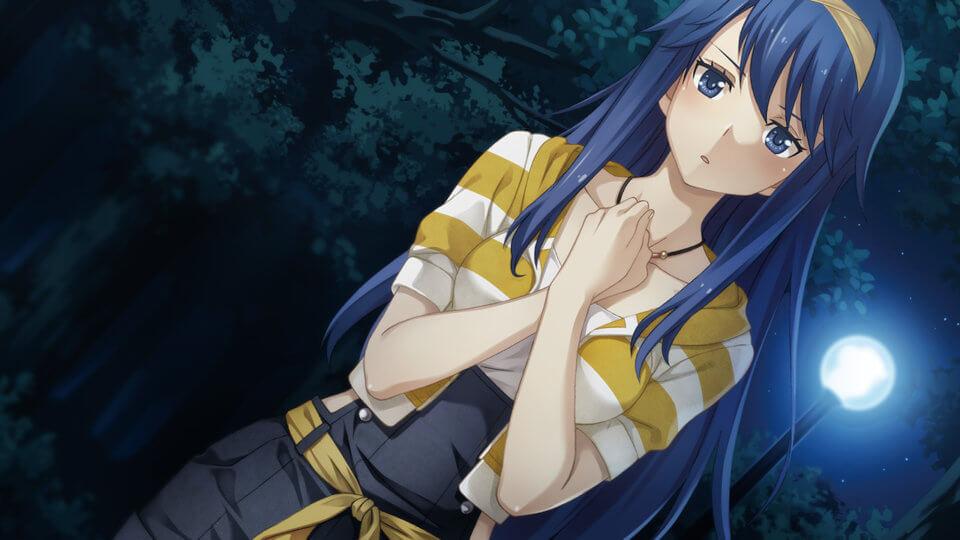 YU-NO: A Girl Who Chants Love at the Bound of this World is a great, time-bending visual novel and after playing through it, I can see why it was such a hit in Japan over 20 years ago. It’s characters are well explored, fun and witty and I’m always a sucker for a good time travel story. While it does have some pacing issues with it’s story delivery I still very much enjoyed the tale it told and loved how the A.D.M.S system allowed you to fully explore what the story had to offer and cleverly manage inventory. If you’re looking for a new visual novel to play, like time travel scenarios and have a spare 40 hours up your sleeve, you should definitely check out YU-NO.

A Nintendo Switch review code was provided by the Australian/Europe publisher Numskull Games for this review. 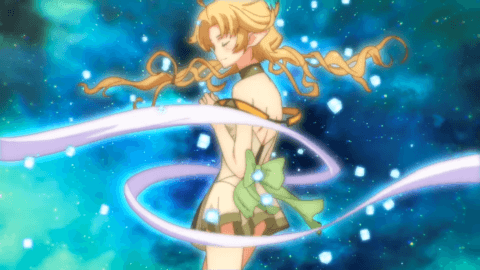