When I played it back in 2013, The Last of Us quickly became one of my favourite games of all time. If you had asked me A few years ago if I had wanted a sequel, I probably would have told you ‘no’. I was content with how the original ended and the story it told. But after completing The Last of Us Part 2 I’m certainly glad it exists. Not only does it expand upon many of the themes and systems of the original game, it truly does feel like the second part of one large tragic tale.

There is something really special about jumping into a new Naughty Dog title. They consistently produce quality titles that push the gaming medium forward with every new venture they take and often set the standard for visual fidelity, animation, storytelling and gameplay, that many other developers spend years trying to match before Naughty Dog come back with their next title to start the same loop over again for the industry. And it’s no different with The Last of Us Part 2. It’s a game that is definitely going to be talked about for years to come. And with many top name developers already praising the game online, there’s no doubt the flow-on inspiration will influence many titles from other developers in the coming years to hit higher standards when it comes to the things Naughty Dog has pulled off so well. 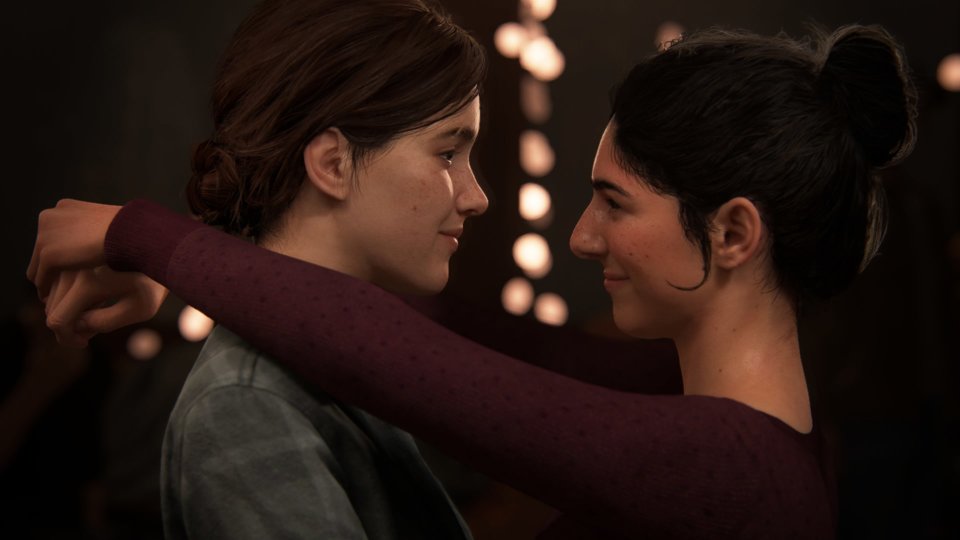 Specifics of the story are extremely hard to talk about when it comes to the plot of this game because almost right off the bat the story kicks off with some really heavy, and spoiler filled moments that ultimately fuel Ellie’s mission for the entire game. It’s been no secret though, based on the pre-release marketing that the game is set 4 years after the events of the first game and based around a revenge mission for Ellie. Travelling from her home in a safe stronghold within Jackson, all the way across Seattle to achieve her goal.

It’s a story that is really hard to talk about without potentially ruining some really big moments and surprises, so I’m not going to be talking about much of the game’s story as it’s something that definitely needs to be experienced in full and I’d hate to spoil even the smallest part of it’s incredibly rich narrative.

Jumping into Part 2, much of the gameplay is directly brought over from how the first game played in terms of core design. If you’ve played through the first game (which I absolutely recommend you do before even thinking of jumping into this) it will be instantly familiar to you. The core mechanics of moving and climbing through the world as well as the crafting system and UI are virtually identical to how they functioned in the first game. But Naughty Dog have used this as a base to have instant familiarity for existing players and then built from that, introducing many new systems that will be used throughout your adventure such as rope mechanics, swimming, crawling (going prone) new weapons and of course having Ellie ‘feel’ completely different to play as compared to Joel from the first game. 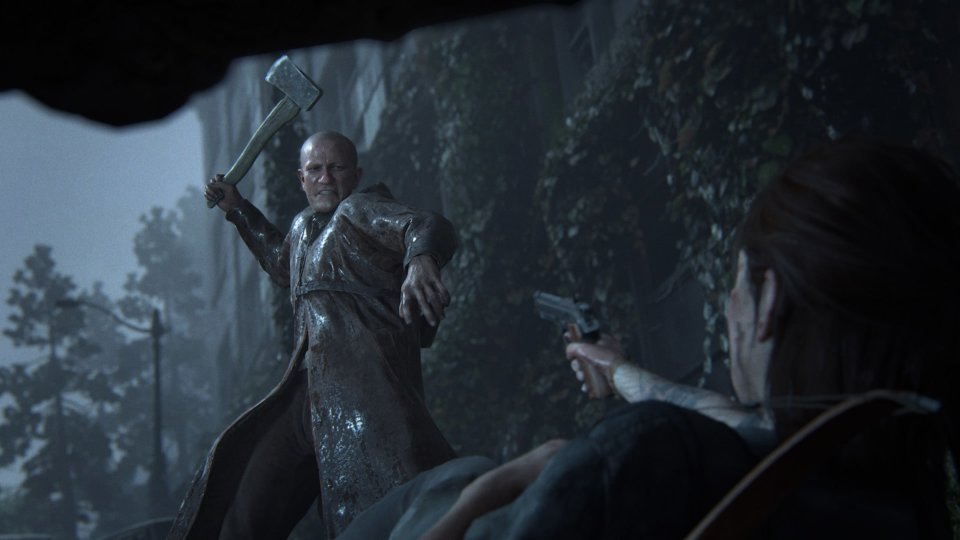 Ellie is much faster on her feet, feeling much more agile than Joel was in the first game and with this comes the new dodge mechanic. When in combat, Ellie is able to quickly dodge at the last moment to evade enemy strikes, forcing you to be more methodical in combat this time around, watching the enemies for certain queues indicating they’re about to strike. You can no longer just rush in mashing Square and expect to come out of top this time around. Ellie may be faster but doesn’t have the same physical strength Joel did which brings an interesting ‘brains over brawn’ component to combat scenarios.

Along with Ellies new skillset, the enemies here have become a lot smarter this time around too. They’ll now actively search for you once they have an indication that you’re in the area, even searching underneath cars and within rooms. And when you’re discovered, things can go downhill fast because the enemies here don’t surround you and then stand there watching, waiting to take their turn to attack while you progressively take them out one by one, which is commonly the case in many games. They’ll brutally attack your from behind while you’re defending against another enemy facing you head on or damage you from a distance with gunfire or arrows. When discovered, I often found the best thing was to try and escape and hide because the enemies don’t mess around here. They want you dead just as badly as you want to end them, and they won’t wait for their turn when given the opportunity to get you.

There are also new types of Infected roaming the world now too. Once again I won’t spoil what these are, but for those that are fans of the lore of the world of The Last of Us, you’ll love the new challenges these creatures provide and twists they add to the gameplay. 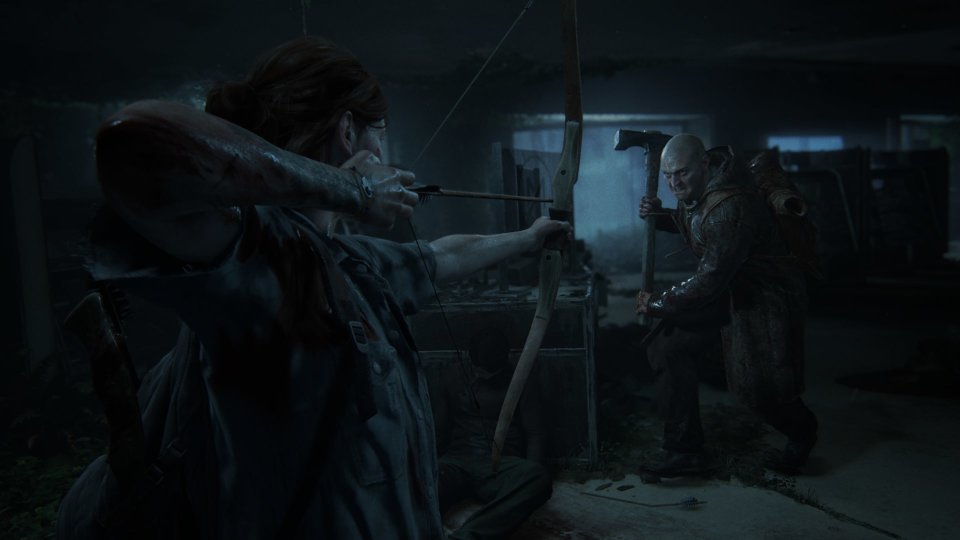 Speaking of the world, Part 2’s environments continued to shock me the further I progressed through the game. There are so many varied locations that haven’t been shown in any of the game’s marketing material and they are all packed with so much detail and visual fidelity that this post-apocalyptic take on Seattle felt so rich and grounded.

This is the largest game Naughty Dog have ever created and although it is mostly a linear experience, the environments are huge. There is so much to see and do that are located off the main path of progression that some of the game’s best moments and conversations can easily be missed if you don’t take the time to go looking for them. While you could just rush through the areas going from point A to point B to get through the story, you will be missing so much of what makes this world so engaging. Taking the time to go into abandoned houses and areas off the main path won’t only reward you with additional ammunition and resources for crafting, you’ll often come across notes left by other survivors that reveal additional stories and also the chance of gaining new weapon types or personal upgrades, so take your time in this world. It’s worth it.

One thing I will mention about the game’s story is that it’s dark. Certainly far more dark thematically compared to the original game, which was already pretty depressing at times. The Last of Us Part 2 features the heaviest and bleakest story I can remember ever experiencing in any game I can remember but that’s not to say I didn’t love it. There’s no doubt that this was completely by design. It’s an incredibly dark world, and the story is designed to make you feel things, grab you on an emotional level and make you question what you would do if put in the same situations as the characters. It’s clear that’s what Naughty Dog wanted the player to experience, and they’ve absolutely pulled that off. In the world that has been established over these 2 games it’s clear that no one is safe and risks lie around every corner, this is shown over and over again throughout the game which continues to keep the game grounded, even though it includes numerous supernatural elements. 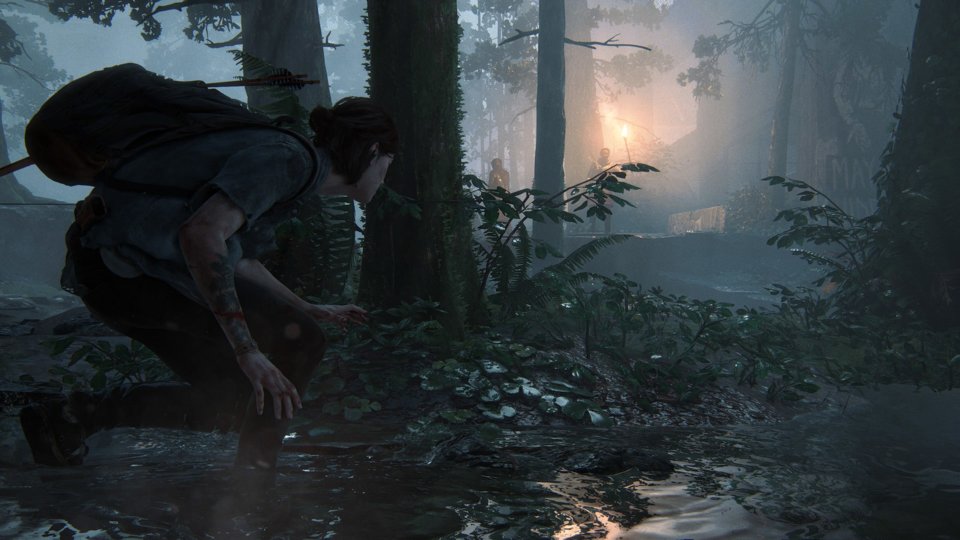 Even though The Last of Us Part 2’s main themes are heavy and bleak. It isn’t like that for the whole journey thankfully. It does give you some time to breathe with many of the darkest scenes being juxtaposed with some of the most feel-good moments I’ve experienced in any video games. If your’e familiar with the giraffe sequence from the original game, you know the kinds of things I’m talking about. There are quite a few of these types of moments in Part 2 and they never failed to leave a smile on my face when they occurred.

It’s quickly apparent once jumping into the game that the character models, environmental detail and animations in Part 2 are unmatched when it comes to everything else available on the PS4. But what really takes Part 2 to the next level are it’s character performances. With a cast lead by Ashley Johnson, Troy Baker and Laura Bailey, it’s clear to see why they get so much work in the industry. Their performances make the characters feel emotionally relatable, grounded, believable and effectively make the heavy and emotional scenes within the game land. I was in tears numerous times throughout my playthrough because of how much I empathised with the characters and what they were going through.

There is only one area where The Last of Us Part 2 slightly falls down, and that is with it’s mission and story pacing. Depending on how you want to experience the game, this may divide audiences. This wasn’t a massive issue for myself because of how methodically I like to enjoy these games, but there are certainly times throughout the story where things felt like they could have been moving a little faster and certain sections and combat scenarios could have been trimmed down in length. As mentioned, the game does reward those that take their time and try to see everything that is on offer. This not only rewards you with lore but also additional materials that can be the difference between breezing through or struggling in your next combat area. Those that want to just experience the main story may find the moment to moment gameplay focused on searching too slow, with key story beats sometimes being hours and many encounters apart. 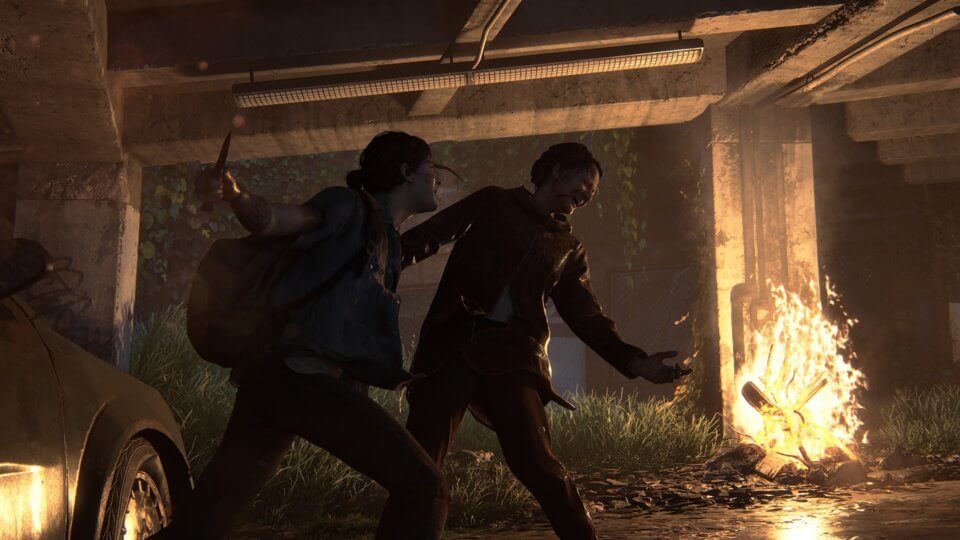 The Last of Us Part 2, like the first game is a masterpiece. Naughty Dog are mostly unmatched when it comes to storytelling, animation, music and visual fidelity and that is very much still the case here. The story is heavy, dark and full of twists and certainly feels like ‘Part 2’ of the events setup in the first game. It’s a shame we likely won’t get another Naughty Dog title for another 5 years, because I can’t wait to see what they’re brewing up next.

A PS4 review code was provided by Playstation Australia for the purpose of this review.