There’s always something special about starting up a new Kingdom Hearts game for the first time and seeing the title screen fade in, usually accompanied by a rendition of the series’ title theme song Dearly Beloved plays. And Melody of Memory gave me the exact same feeling. Kingdom Hearts is a series that is most certainly not for everyone. But for those that do have an attachment to the series, I’m sure you’ll feel the same way when jumping into this new entry in the ever-growing franchise. 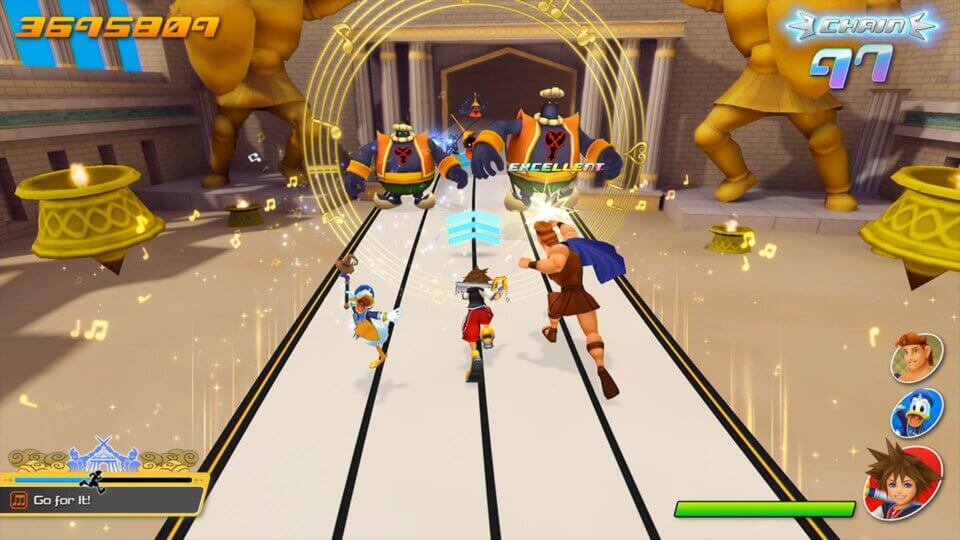 Melody of Memory isn’t a new Kingdom Hearts game in the traditional sense, it’s actually a rhythm based game made to celebrate the fantastic music of the Kingdom Hearts franchise. The game is technically set after the events of Kingdom Hearts 3’s DLC ReMind and at it’s completion does provide a small amount of new content, hinting at where the series may be headed in future titles but there is no traditional ‘Story Mode’ here. Instead, most of your time with the game will be spent in the ‘World Tour’ mode. In this mode you’ll travel chronologically through the worlds visited within the Kingdom Hearts games and playing iconic tracks and themes from those worlds starting all the way from Destiny Islands from the first game through to themes used in Kingdom Hearts 3.

Melody of Memory’s core gameplay is the definition of simple to grasp, difficult to master. You’re taught everything you need to know to successfully play through the songs, overcome the obstacles and survive until the end of the track in the opening minutes of the game, but the World Tour mode quickly starts blending more and more of the core mechanics together to provide a real challenge for anyone wanting to play through the tracks on the game’s Proud difficulty. But for those that may just want to enjoy more time with Kingdom Hearts characters and the series’ iconic music, don’t fret, there are multiple difficulty options available for all tracks with a simplistic ‘Beginner’ mode available for those that don’t want or like the challenge. 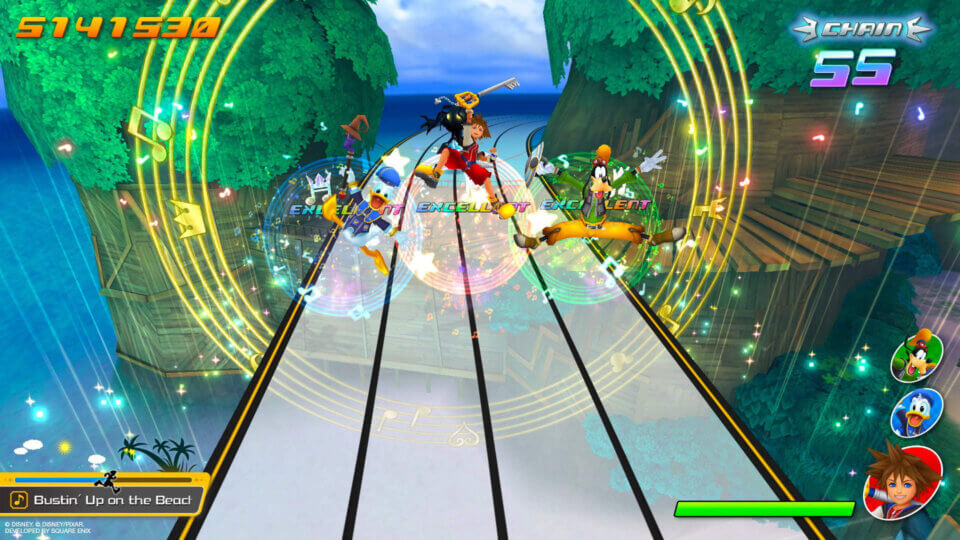 The game is packed full of nostalgia for fans of the franchise and allows you to relive key moments and music from all of the games in the series so far. AS you play through the tracks you’ll intermittently be shown a narrated cutscene that recaps a key moment from the game who’s tour you’re currently completing, but rather than it being a recap of the events of the game, it’s really more of a dot-point refresher for those that would have already played through that title. Melody of Memory makes very little attempt to actually recap the story of the franchise so I can’t recommend it for people that haven’t already experienced the games or thought this would be a way to get a fast tracked version of the main story. You won’t find that here, but you will certainly have a nostalgic and memorable time reliving those moments with their accompanying music if you already love the series.

When it comes to replayability, Melody of Memory has the ability to keep you entertained for a very long time. While it will only take you about 10 hours to play through the game’s roughly 150 tracks. If you’re a completionist or trophy hunter, you’re going to have plenty to do to master the tracks on their highest difficulty and collect all of the available item drops to unlock all of the content viewable in the game’s Museum mode or competing with yourself or others for higher and higher scores. Each track in World Tour mode also comes with a number of objectives that you can try and obtain to earn more and more stars. These are fairly standard objectives such as ‘Complete the stage with X% of health remaining’, ‘Complete without using items’, ‘Hit X% of a certain enemy type’ etc. These do give you additional sub objectives to chase if you’re playing through the tracks numerous times and provide added incentive to play levels multiple times. 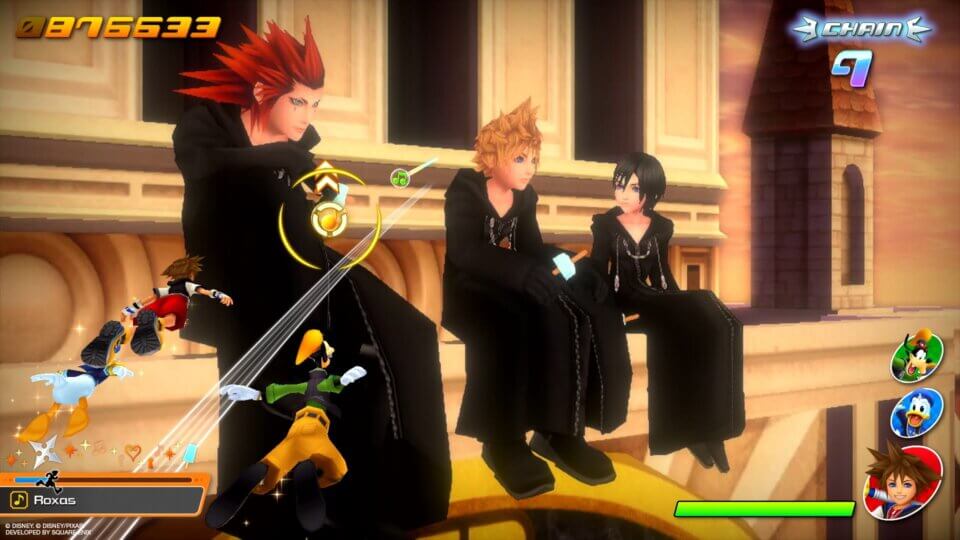 While I did enjoy most of my time playing through Melody of Memory, I did have some slight issues with the game at times. My main problem probably came from getting a little too capable for the game’s Standard mode, but still not good enough to play every track on Proud. This is a similar issue I often faced in other rhythm games such as Guitar Hero too. The way these games handle difficulty is often by having a reduced number of notes (or in this case Heartless) on the track that need to be hit to pass the stage. For someone who is very familiar with the music of the Kingdom Hearts franchise, I actually found it more difficult at times because there would be no note to hit at key beats of the song because they had been removed to reduce the overall difficulty on Standard mode. I also found quite a few of Kingdom Hearts softer, more orchestral and somber score pieces really didn’t suit having their own stage and it’s almost like the developers knew this so added in many extra non existent notes (Heartless) on the runway to beat that didn’t actually line up with the progression and chord changes of the track, almost seeming completely random at times, making it hard to grasp the music beat and pattern to gain high scores on those tracks. 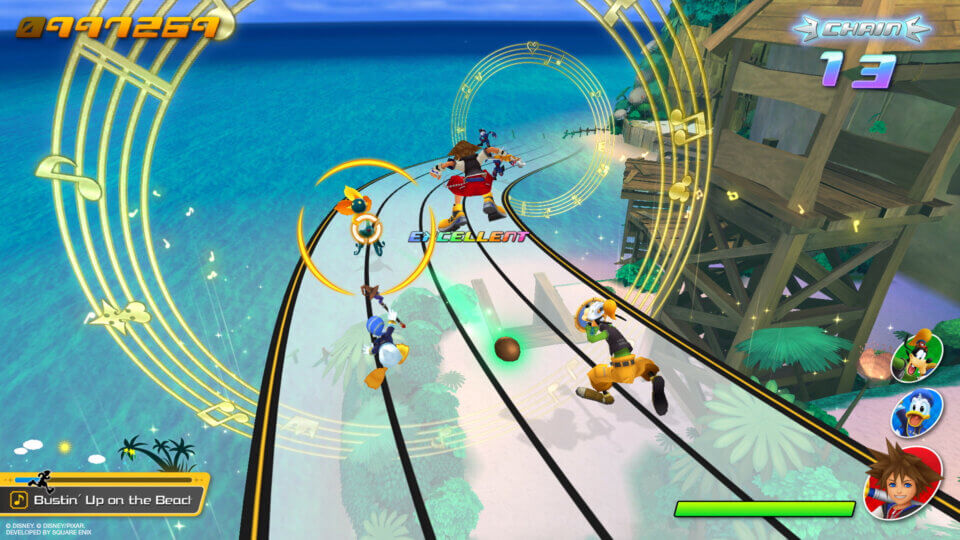 If you’re done with the World Tour mode or just want to explore something else, Melody of Memory also contains a track selection mode where you can select and play any of the tracks featured in the game, a Versus mode where you can compete against computer players or others online or locally and a Museum mode that allows you to view your obtained collectibles, view the story archive or view key cutscnes in the theatre section or just play music tracks from the game to just happily listen to in the jukebox area.

It’s no secret I’m a big fan of the Kingdom Hearts series, and I loved reliving the key events and iconic music tracks here in Melody of Memory. It’s a game that will be best enjoyed by people already familiar with the core story of the series and want a new way to enjoy something in the Kingdom Hearts universe. And does provide a slight glimpse into where the series may be headed next, although it’s surely to be many years before we get our hands on whatever that may be.