When it was originally announced back at PlayStation’s Future of Gaming event in 2020, Kena: Bridge of Spirits immediately grabbed my attention due to it’s highly polished visuals and intense action. Now after playing the game I’m glad it delivered not only on those aspects, but also featured really solid combat, art direction and puzzle designs.

Kena: Bridge of Spirits is the debut title from Ember Lab, a studio that up until this point have been known for their work in the animation and art space. But now the studio is bringing their artistic experience to video games, and it doesn’t take long to see their skills shine as Kena’s art direction is among the most vibrant and attractive game’s I’ve played all year. 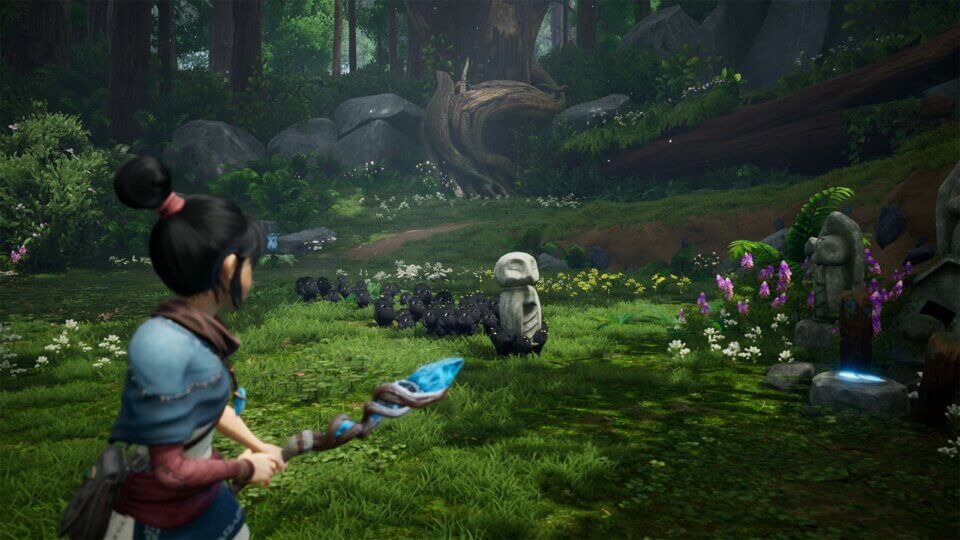 In Kena: Bridge of Spirits, you play as the titular Kena, a spirit guide trying to gain access to a sacred shrine in the mountains who is tasked with helping lost spirits pass on to the spirit world after becoming stuck in the physical world. Much like that Jennifer Love Hewitt show, Ghost Whisperer, Kena has to get the spirits to first gain closure before they’re willing to move on. Kena’s core theme is based around the concept of loss and acceptance, which came as quite the surprise given how cute and charming the world and characters appear.

Kena is a third person, action-adventure game that takes place in a gorgeously lush semi-open world slowly being corrupted due to a curse that has been unleashed by the game’s masked antagonist we meet very early on in our adventure. This curse has brought with it many monstrous creatures that will do their best to stop Kena completing her quest. The game is incredibly pretty, all the way from it’s scenery to the character models, even the aforementioned cursed areas exude their own beauty with their moody grey and glowing red roots highlighting the corrupted zones. 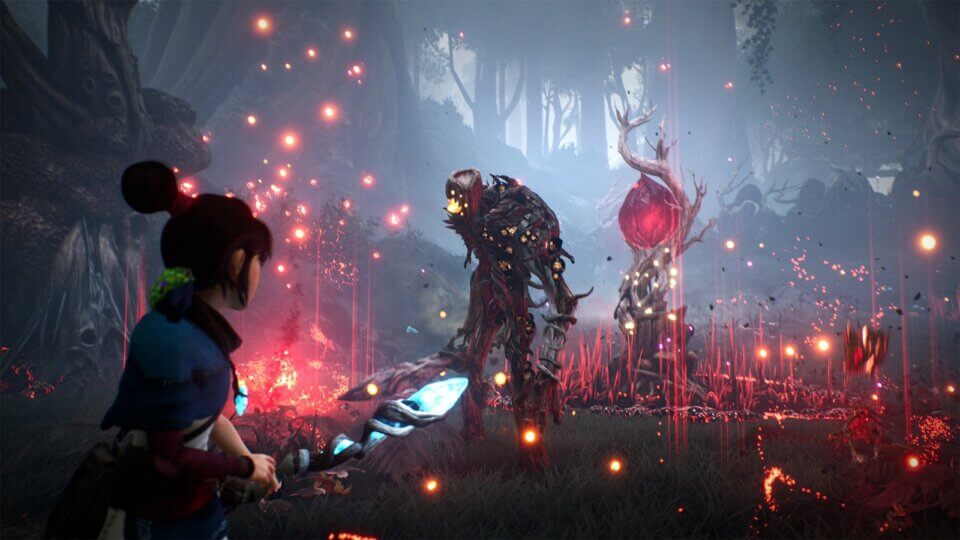 Progression through Kena’s world is fairly linear and you’ll progress through seeing most of it just by completing the main story. There are also some minor Metroidvania elements implemented as Kena will be able to access new areas once gaining some of Kena’s new skills or double back to find new zones in existing ones. And even throughout your journey, the game does encourage and rewards exploration. You’ll often find treasures, cursed chests that come with their own risk/reward system, meditation spots, new puzzles and collectibles if you go searching off the main path and take the time to see more of the world.

For a game that looks so kid friendly by design, I was shocked by it’s surprisingly difficult and involved combat encounters. While the standard enemies will offer little resistance and can be beaten down with a few swings of Kena’s spirit staff, the bosses come with a massive spike in difficulty, the requirement to learn attack patterns and have the ability to turn the battle in their favour or wipe Kena out with just a few hits. Kena has no passive healing ability but most encounter areas have a limited of number of healing flowers that can be activated to provide a boost of life, but they too come with their own risk/reward system as the courage meter that unlocks the use of the healing ability is the same that can also be used to deal special damage to the boss or other creatures, providing another layer of strategy to the encounters. Just about all bosses took me multiple encounters to beat, as I found it almost impossible to do without learning their attack patterns and best approach to deal damage. 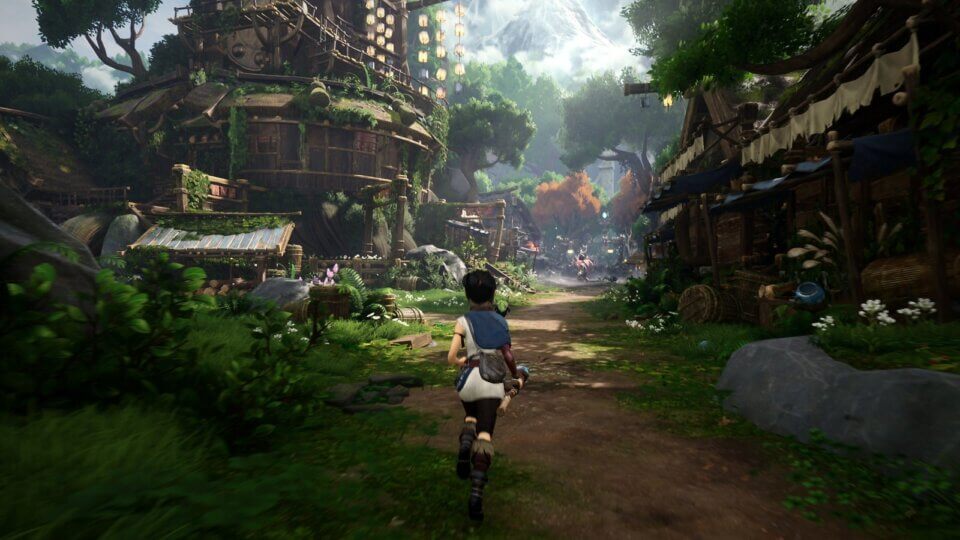 Kena’s arsenal is quite barebones consisting primarily of her spirit staff which has both a light and heavy attack, along with the ability to turn into a bow that fires spiritual arrows, as well as the ability to cast a shield and dodge roll. While her move set is quite limited, it can be expanded by purchasing new skills within the game’s skill tree menu. Kena is also accompanied on her journey by a bunch of cute, collectible creatures known as Rot. The Rot can also be summoned into battle by building up and then spending Kena’s courage bar and are great for dealing damage to enemies, or immobilising them so that you can approach a vantage point to directly target an enemies weak spot with Kena’s bow.

The combat, although limited when it comes to the arsenal of weapons and abilities available never becomes stale due to the game consistently introducing new and varied enemy types and bosses to defeat. Just as I was starting to get comfortable facing off against the enemies, suddenly the game would introduce new variations, or enemies that could attack from afar, from the skies or even ones that the ability to cast magic and heal themselves. This means that although you’ll be using the same tools to defeat them, the way in which you may need to approach doing so can drastically change. 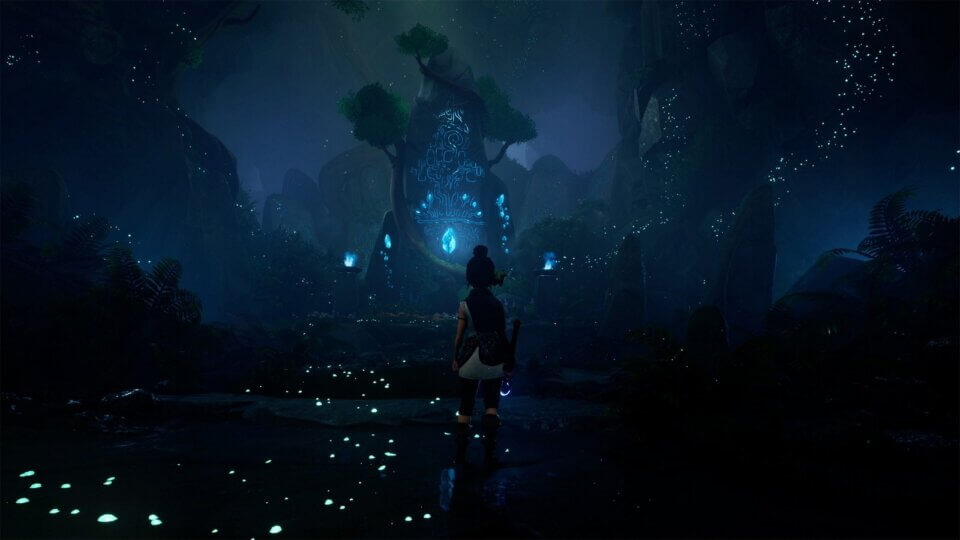 For review I played through the game on PS5 and really loved the immersive feel of the haptic feedback vibrations that can be delivered via the DualSense controller, but above all, I loved how great Kena’s spirit bow felt as it utilised the adaptive triggers perfectly. Many games since the PS5’s launch have added tougher resistance to the trigger used to fire a gun or bow but Kena’s bow firing feels great as it’s not just a steady level of resistance implemented as you press down the trigger to fire. The trigger has resistance and a steady shake that better converts that realistic resistance of pulling on a bow string and having it fight against you. Combined with the sound emitting from the controller, it was a joy to fire that bow, every single time.

While Kena: Bridge of Spirits is undoubtedly a fun and well paced experience, as it’s a brand new IP, I would have loved if I had come out of it knowing a bit more about Kena herself. Her gorgeous character design and good actions make it really easy to empathise with the character but I would have loved some more character development to learn more about her as a person or even a deeper look at her future aspirations. But who knows, perhaps a sequel could offer up more in that regard and Ember Lab are keeping some things close to the chest for now. 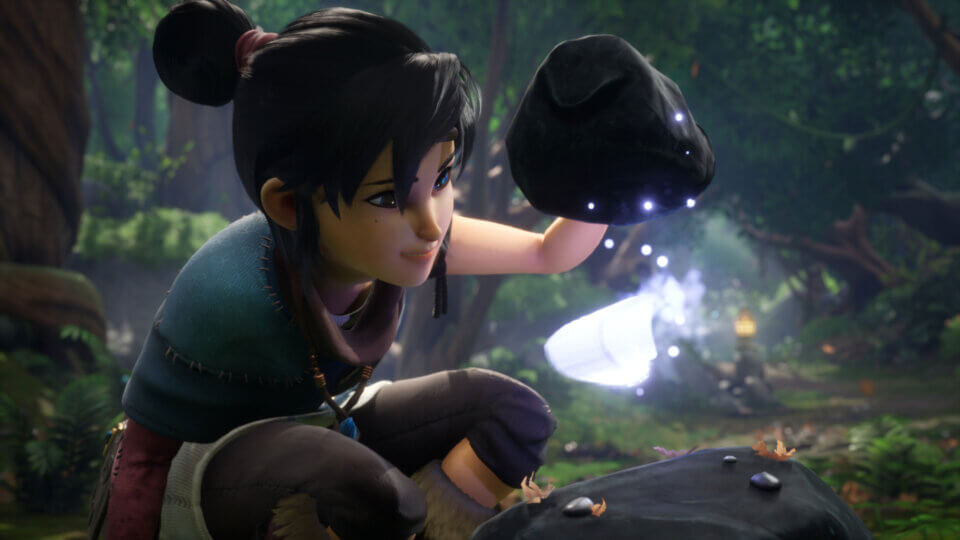 Kena: Bridge of Spirits is an incredible debut effort from the clearly talented team at Ember Lab. It’s stunningly gorgeous, has a great cast of characters, varied enemy types, has a well paced story all backed by an engaging soundtrack. It certainly has me excited to see what could be implemented into a future sequel if that’s what the team decides to do next, but regardless I’ll be there to check out what Ember Lab launches next.