It’s always a great feeling jumping back into a game that you loved so much the first time through. It’s even better when you get to come back to that same world but have a massive amount of new content at your fingertips. With The Frozen Wilds, developer Guerrilla Games have delivered a brilliant story expansion set in a brand new area and packed it with new machines to battle and collectibles to find. All while allowing it to weave into and enhance the core game I already loved.

The Frozen Wilds introduces a new area of the map in the north-east of the Horizon Zero Dawn landscape. Once installed, The Frozen Wilds content can be commenced by speaking to one of the three quest givers located on the world map. It is recommended being at least level 30 before doing so though. This expansion isn’t a simple walk in the park. I continued my existing save file from the core game and even at level 50 with the best armour you could earn I still found it to be quite the challenge. Which is great as one issue I had with Horizon Zero Dawn was that it lost it’s sense of danger and challenge once I got the shield weaver armour. 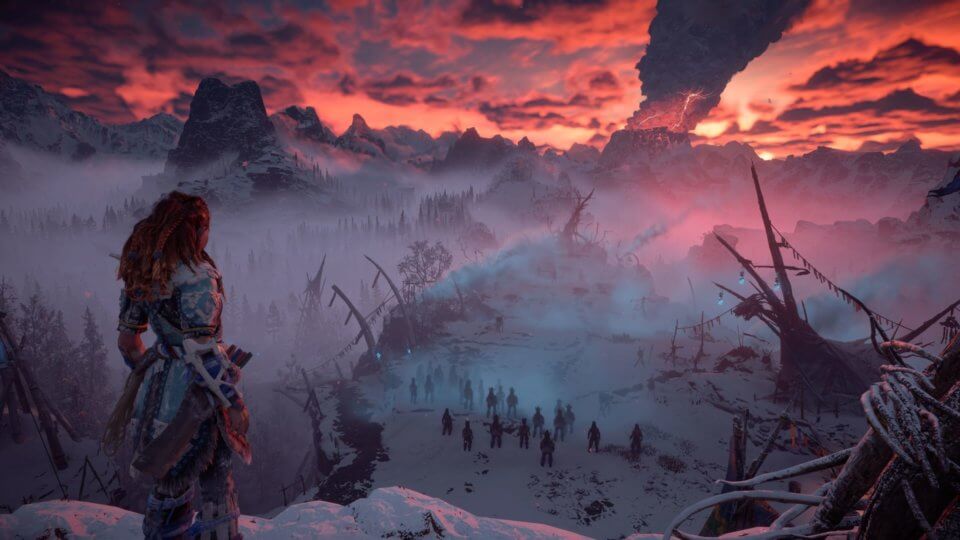 Expanding On What Was Already So Great

The expansion primarily takes place in the wintry north in a place known as The Cut, the current living space of the nomadic Banuk tribe first introduced in Zero Dawn. The Cut, although packed almost entirely in snow still sports some of the most beautiful visuals and vibrant vista’s. I found myself a number of times being distracted while heading to the next mission point, stopping to appreciate the environment. Taking a few screenshots using the highly customisable photo mode while I did.

Knowing that the snow would be a major aspect of the expansion, Guerrilla Games seems to have invested in making it realistic. Adding to the immersion for the player as they move Aloy through the world with the use of a realistic wind physics and a great particle system. Walking through areas with deep snow causes Aloy to laboriously trudge through it, and further adds to the panic of being chased by mechanical beasts. The snow also appears to be impacted by the games wind system. You will frequently see snow and ash falling and being blown into the screen when traversing, and fine flakes of snow blowing off surfaces and dunes in valleys. It’s these small details that make the world in Horizon feel like a living and breathing entity. 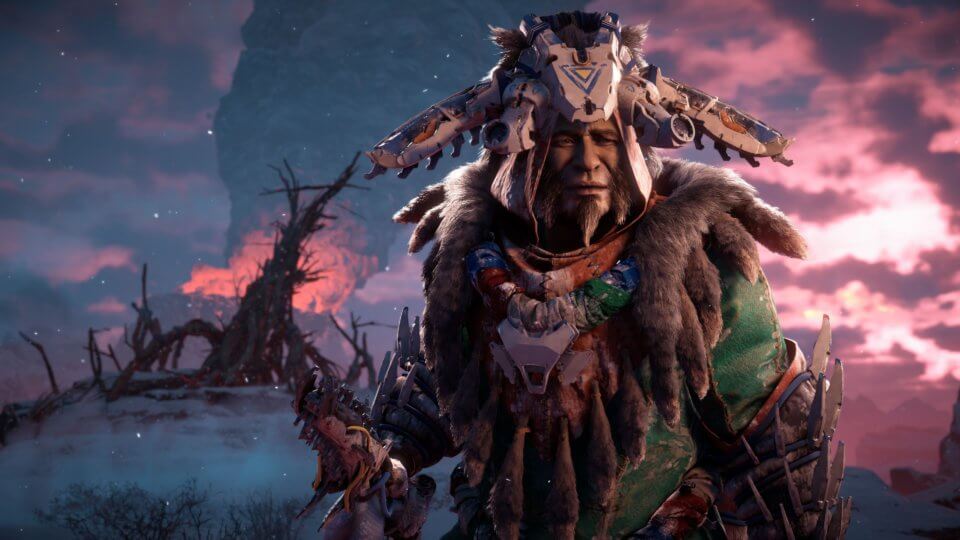 Loved Having A Renewed Sense Of Challenge

The Frozen Wilds does a great job of bringing you back up to speed during the opening missions of the expansion. Appreciating that players may need some time to get back into the groove of things if they haven’t played since it’s launch 9 months ago. It eases you back into the combat mechanics having you fight a lone machine in an early area to refamiliarise yourself with combat mechanics such as the bow, spear and various launchers as well as how to dodge.

Throughout the expansion there are a number of conversations that act as a refresher to the story of the core game. Some of which are just mentioned in passing by non-interactable NPC’s. This was a great touch as I hadn’t played in some time and felt these small tidbits of dialogue helped me remember some key moments from the story. Especially it’s closing chapters. It’s for that reason that I would suggest not jumping into The Frozen Wilds (or mainly it’s final two story missions) until you have either completed the core story or have passed the main mission ‘The Mountain That Fell’. Which is likely you will have as the final missions of The Frozen Wilds have a high recommended level. But thought it would be worth mentioning. 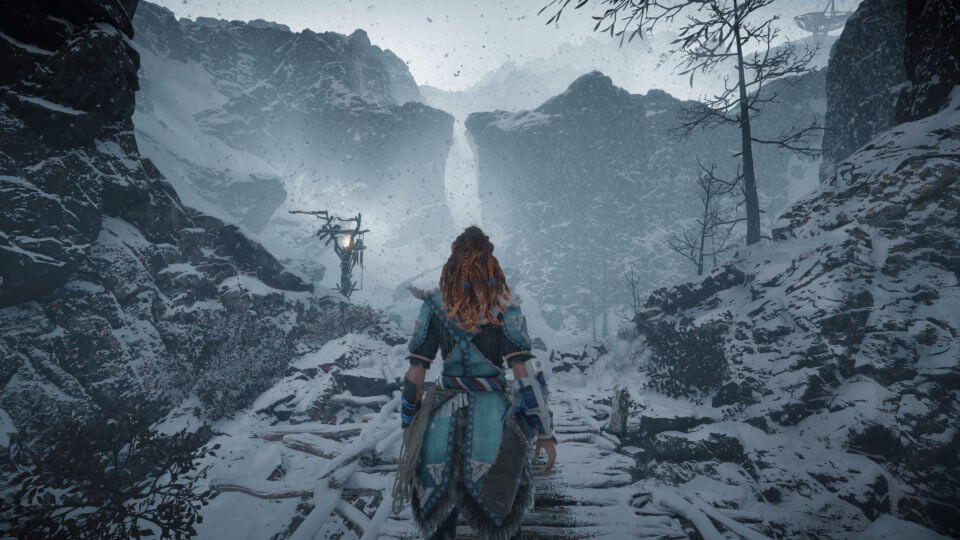 The characters featured in this expansion are some of the most interesting and well written from the entire game. Guerrilla have also delivered some brilliant side quests here. They aren’t your generic RPG filler fetch-quests that you grind through for just for the xp in between main missions. I actively put some main quests aside to join side characters on their own quests and errands just to find out more about them and earn the promised rare loot. Not once did I feel I was completing any missions just to check them off the list and reap the xp.

The facial animations, lip syncing and camera movement during conversations seems to have been improved from what I remember playing during the launch period of Zero Dawn too. The Frozen Wilds has a number of cinematic style cutscenes throughout that look absolutely stunning. Showing that Guerrilla Games know how to get the most out of the PS4 hardware.

All About The Beasts

You can’t mention the cast of characters without also giving special mention to the incredible mechanical beasts that roam the lands looking to tear you apart at the drop of a hat. While there aren’t many brand new beasts introduced in the expansion, the ones that are provide a great challenge. They have abilities not seen by any of the existing beasts and are able to move through the snow extremely swiftly. Existing beasts also become more ferocious thanks to the new Daemon Corruption system too. Just to make sure you never feel too safe. 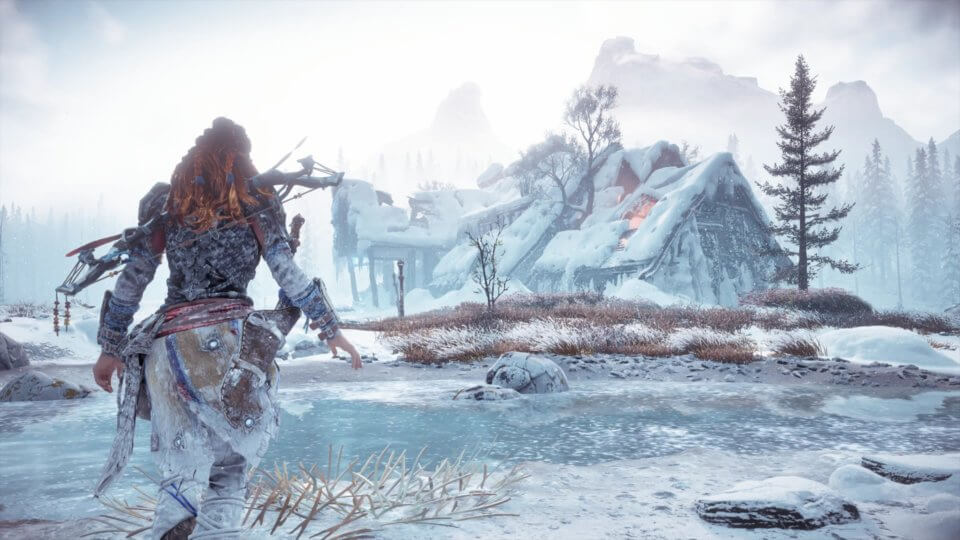 Some of the best times I had when playing Zero Dawn were when I chose not to partake in a quest and just roam the world finding new area’s, picking up collectibles or scaling the Tallnecks. I was so glad that in The Frozen Wilds there were additions to the things you can do while exploring. Including obtaining the new collectibles, pigments and animal figures and the introduction of the Daemon Tower zones provide a hectic battleground where Aloy’s shield becomes disabled and nearby machines gradually heal until the tower is destroyed.

The Frozen Wilds also introduces a new path on the skill tree known as the Traveller. It focuses on ease of movement through the world on mounts and introduces the ability to break down excess resources into shards, clearing the space in your carry bags. This skill tree isn’t specific to just The Frozen Wilds content but improves Horizon Zero Dawn as a whole. Making me want to finally start that new game+.

Horizon Zero Dawn: The Frozen Wilds is exactly what a great expansion pack should be. Guerrilla Games have provided a brand new experience, expanding on what they had set up in Zero Dawn and improving what was already a great game. I loved every minute of the 15 or so hours back in that world. The amount of new content, beasts and objectives left me feeling extremely satisfied by it’s end. It is well worth the asking price for any fans of Horizon Zero Dawn. This is the only expansion Horizon will be getting but I can’t wait to see what Guerrilla Games have in store for us next. If they keep on this path it’s bound to be a hit.

A Horizon Zero Dawn: The Frozen Wilds review code was provided by Playstation Australia for the purpose of this review.