If you follow gaming news or the industry’s awards shows, you’ve likely heard of the critically acclaimed roguelite Hades. Originally launching last year on PC and Nintendo Switch, the game has now come to PS4/5 and Xbox and it’s every part the experience that lead to many game of the year awards last year, with a couple of new features on console.

In Hades you play as Prince Zagreus, the son of the titular Lord Hades as you attempt to leave home and escape the underworld. The game is built on a roguelite foundation, where initially you’ll have next to no chance of actually achieving your goal of rising through the numerous levels of the underworld to escape. But as you increase in skill and ability and master the attack patterns of the many many enemies trying to stand in your way, you’ll begin to truly feel more and more like a god, getting ever closer to achieving your runaway dream. 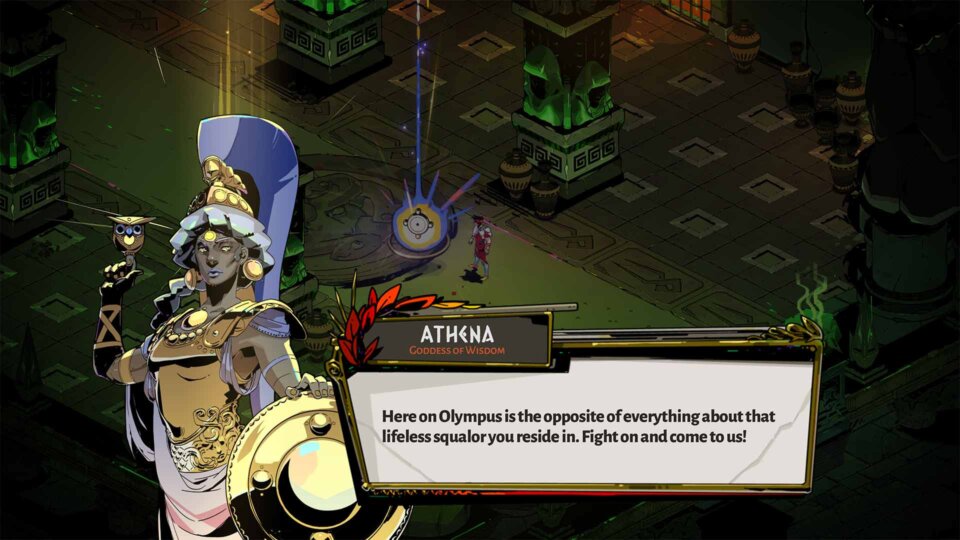 Where this Greek mythology themed roguelite is unique is within the way it handles progression between it’s runs. The loops in Hades don’t just restart the game or utilise a time travel mechanic where you’re sent back in time to just try again. The runs are designed around further progression, and the characters within the game react to, and remember what transpired in your failed attempts at leaving the underworld.

And those failed attempts really shouldn’t be seen as a failure or ‘game over’. Dying in Hades actually leads to progression, and once I was able to realise that death isn’t failure in the traditional sense, and provides it’s own layer of strategy, I began to embrace it, not only as a learning experience but as the key way to make Zagreus stronger and have a better chance at succeeding next time.

Upon starting a run, you’ll have your selection of 6 primary weapons (which are also progressively unlocked and then enhanced via play), each of which have their own pros and cons that can be utilised to suit your preferred playstyle. For example the sword is great at focussing on foes in the near to mid range and deals a fairly balanced amount of damage, the bow is slower to draw but deals heavier damage and is great at picking foes off from a distance and then things like the spear are a good balance of both and is a personal favourite of mine due to how effective it is at all ranges and how fast Zagreus is able to utilise it. 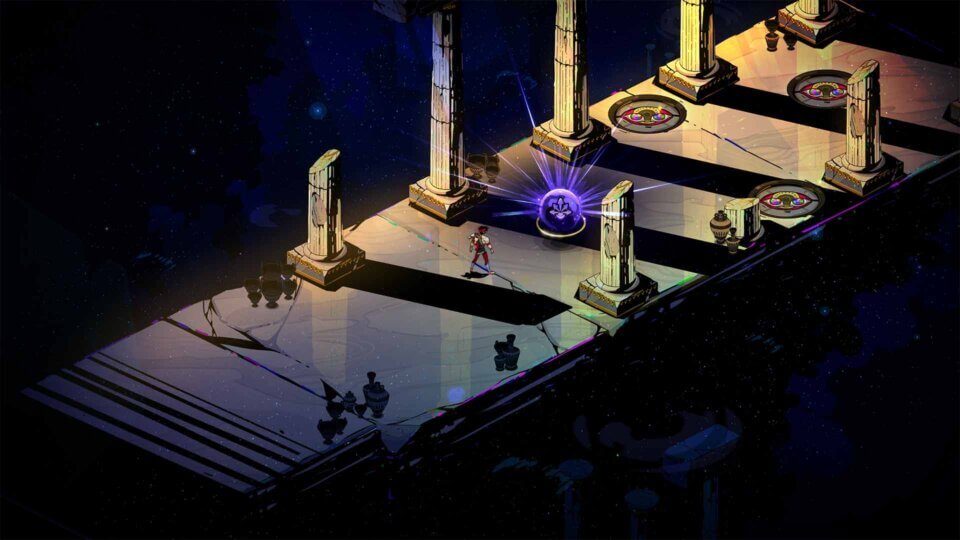 After selecting your weapon, Zagreus is presented a random Boon from one of the many gods of Olympus that feature within the game. These Boons offer an ongoing upgrade to Zagreus such as providing area of effect dash damage, the ability to deflect attacks or increasing movement & attack speed, among many other things. There really are a ton of them in the game to keep each run slightly unique and I continue to discover new Boons I’ve never encountered before even at around 50 hours into the game.

While the level layouts and Boons presented to you are randomised each run, you do have some level of control to how you decide to buff up Zagreus within that run to prepare you for the final confrontation with Hades himself. Upon defeating the enemies in a stage you’re generally presented one or more doors to progress through. These doors will feature a symbol which is representative of what Zagreus will gain if you clear the next room. Things such as health drops, Boon powerups, new Boons, gold coins to spend at Charon’s store, keys that can be used as currency at the house of Hades and darkness crystals, just to name a few. You’ll come to understand these symbols and what they have the ability to grant so that you can head towards what you favour, or what you need at that time in the run. 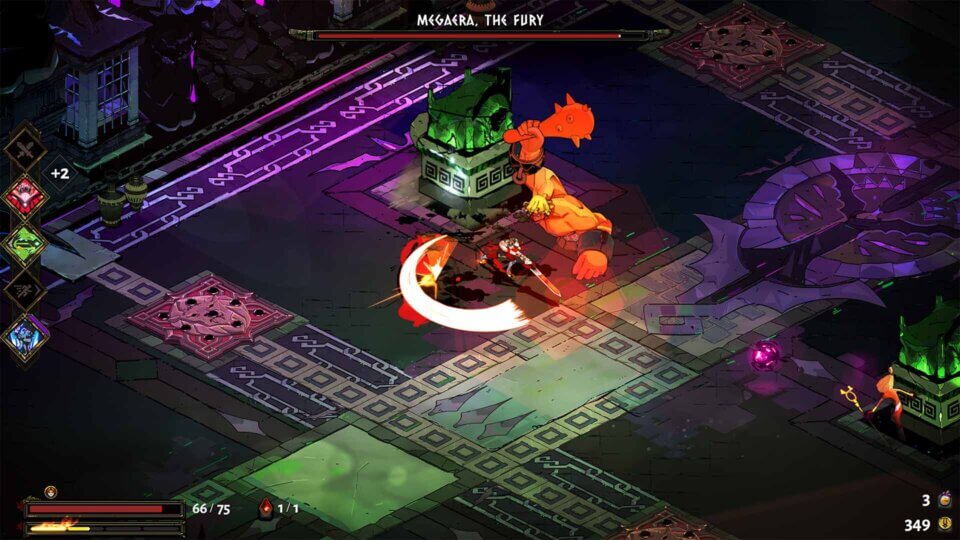 If you do happen to be unsuccessful in your escape, you’ll be whisked back to the house of Hades to spend your various currencies earned throughout the run on upgrades for Zagreus to then rinse and repeat again. This is why even a failed run in Hades still feels like a bit of a win, because even though you haven’t quite succeeded on the goal of escaping, you now have a better chance at hopefully doing it next time.

Just about all of the systems in Hades utilise a risk or reward system which becomes really exciting when combined with the random nature of what could lie ahead. It’s a key part of what made the game so addicting for me and what keeps me continuing to come back.

A key highlight for Hades is it’s characters. All aspects of them. Their engaging writing, their visually gorgeous designs, their performances, it all plays a part in making them feel like real parts of this chaotic world and it was a real treat every time I was able to return to the house of Hades to uncover more backstory about them and the world, and develop my relationships with them further. Which is yet another way you can earn new abilities and bonuses for Zagreus. 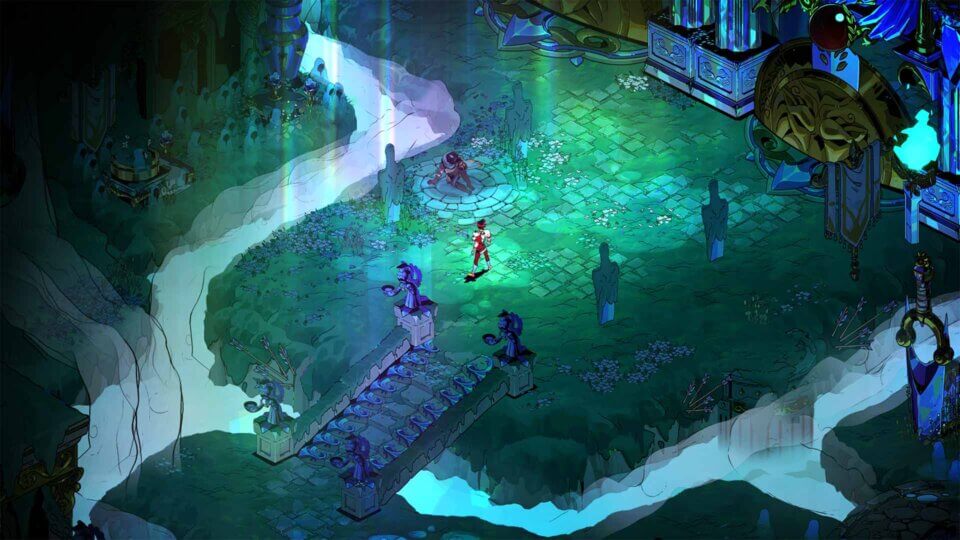 Part of what makes the character relationships feel genuine is how clever and contextualised the writing in Hades is. Between runs, the characters will actually remember previous events from earlier chats you’ve had with them, or even comment directly on things that occurred during the run you just failed. Upon returning to the house, Hypnos will often have something snarky to say about the way you died. And the first time I was able to converse with a boss I had just defeated during my last run to provide further salt in the wound of defeat came as a real surprise as it’s not something I’ve experienced in a game before.

For review I played through the PS5 version of Hades and content wise, it’s the same game that is currently available on both PC and Switch, but there are some slight tweaks provided depending on which platform you may be playing on. The PS5 and Xbox Series X|S versions now feature 4K graphics and the PS5 version also utilises the features of the DualSense to provide some great feeling vibrational feedback and also the most unique implementation of adaptive triggers. Petting three-headed dogs.

From a performance standpoint, on the PS5 the load times from start up to first run and also from death to restarting are nearly instant and despite many of the levels getting incredibly chaotic with numerous enemies and particle effects on screen, I never experienced any frame rate issues or performance drops. 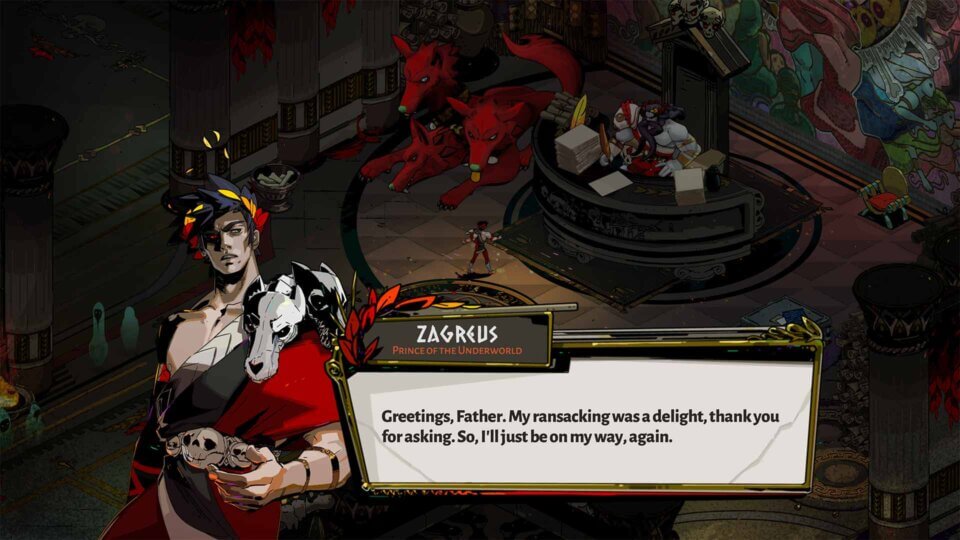 After playing through Hades, I can 100% agree that all of the praise and awards have been absolutely warranted. The game is a masterpiece when it comes to game design, with all of it’s systems existing so cohesively they create one hell of an addicting and insanely enjoyable experience. It’s rare that a game manages to tick all of the boxes, but with Hades’ incredible writing and cast of characters, rewarding systems, it’s music and the way that it provides a fresh take on the roguelite genre, it’s certainly done it for me. Hades is a rare masterpiece in gaming and I certainly can’t wait to see what the talented team at Supergiant cook up next.

A PS5 review code was provided by Supergiant Games for the purpose of this review.