There’s a reason you’ll find Fullmetal Alchemist Brotherhood on most ‘Top 10’ anime lists. And why it’s currently ranked as the number one anime on myanimelist. The series is an absolute masterpiece. Containing a brilliant and diverse cast of characters, each fairly well developed over the series, an engaging core narrative, great pacing and a perfect blend of serious action and comedy. It’s loved by hardcore anime fans and anime newcomers. I know many people who’s first adventure into anime was through this series. The worst thing about finishing it is trying to find another anime that is just as great to move onto afterwards. 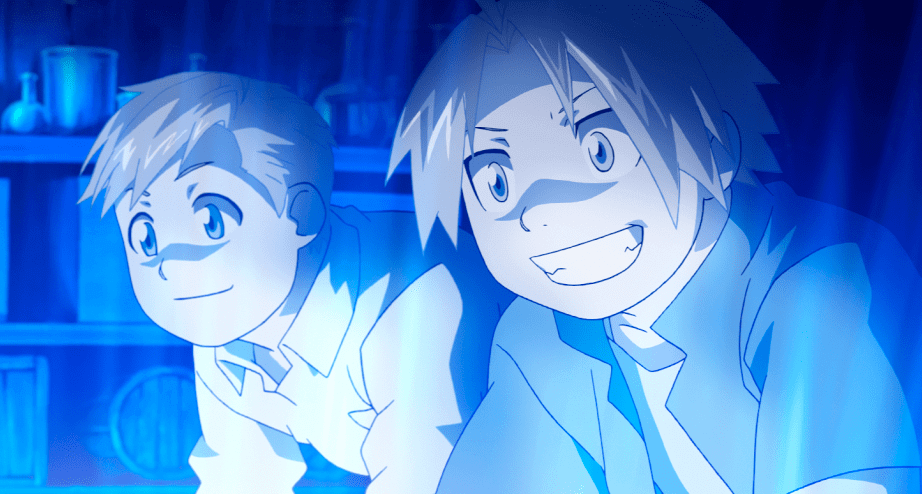 In the world of Fullmetal Alchemist, alchemy is used in everyday life by those gifted enough to understand how to use it. These alchemists have the ability to understand the chemical makeup of a property, deconstruct it and then reconstruct it into something else. Such as using the iron found in the ground to form a spear for example. This process is known as transmutation. If you have no history on what alchemy is don’t fret, the introduction to the show as well as the intro sequence for the first 10 or so episodes will continually refresh you to how it works. Among alchemists there is one well known unforgivable sin, human transmutation. The core plot of the series is established from the very first episode and quickly introduces the duo of protagonists, the Elric brother’s Edward and Alphonse.

After tragically losing their mother, the brother’s commit the unforgivable sin and try to use alchemy to bring their her back to life. This massively backfires and as a toll Edward loses his left leg, while Alphonse loses his whole body. In a last ditch attempt to save his brother, Edward offers his right arm to be able to bind his brother’s soul to a large suit of armour. 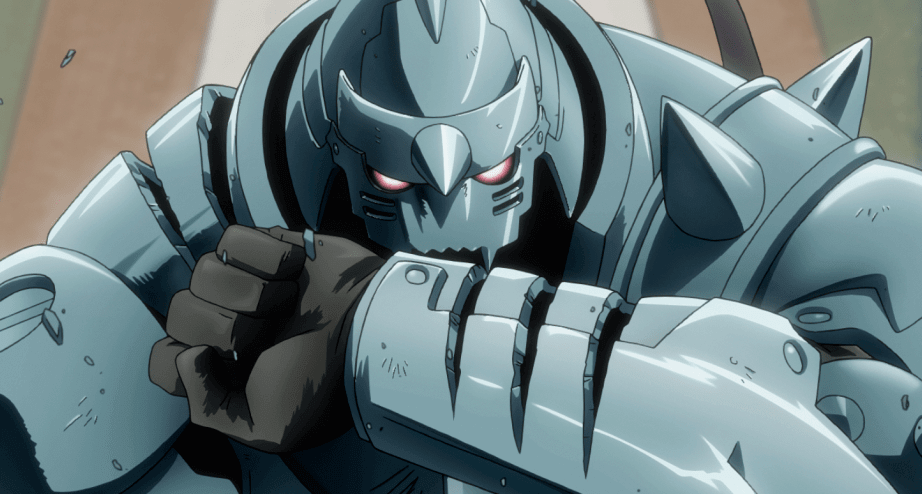 Year’s later the brother’s set out on a quest to learn more about alchemy in an attempt to regain their bodies. This involves Edward joining the state military in order to gain access to restricted research materials to aid in their quest to locate the mythical Philosopher’s Stone. A stone rumored to have the ability to amplify alchemic abilities and make the impossible possible. Along the way the Elric brother’s meet a large cast of character’s that aid their search but also try to uncover a plot to overthrow the military lead by a group of Homunculi that echo the seven deadly sins in name and physical traits.

If you’ve become interested in Fullmetal Alchemist enough to start looking into it, you’ll quickly find that there are 2 anime series. The original anime that aired back in 2003 has a very similar premise and contains the same cast of main characters but the story diverts around halfway through it’s 51 episode run. This was because the series was soon approaching the concurrently running manga and had to implement an original non-canon final half. It was still incredibly popular among anime fans and is well worth the watch but in my opinion Brotherhood is the far superior series and is almost a 1:1 recreation of the manga story line, containing only a pinch of filler in the opening episode and a recap episode around half way through the 64 episode run. Brotherhood began airing in 2009 and almost 10 years on you’ll be hard pressed to find an anime better when it comes to story, characters, voice performance and quality animation. 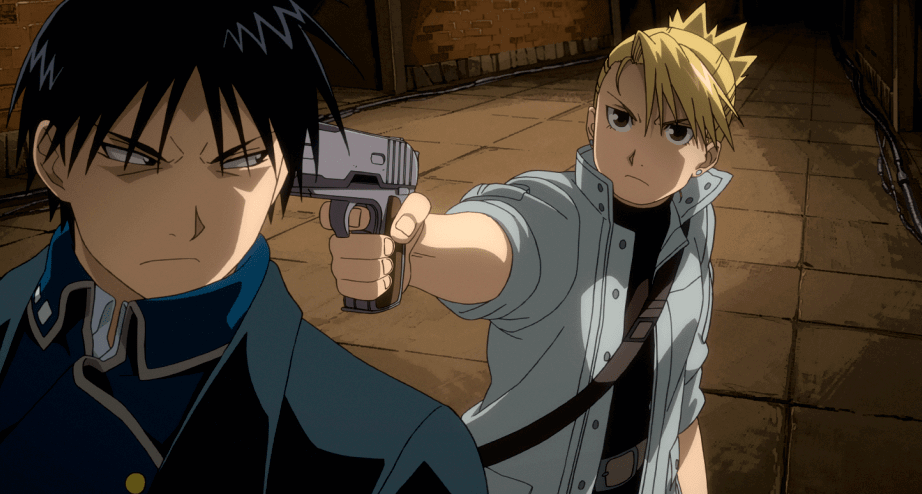 Where Fullmetal Alchemist Brotherhood excels the most is with it’s fantastic cast of characters. Over the course of the 64 episode’s you’ll meet a large number of people that try to aid or derail the Elric’s journey. With many having their own sub plot’s running concurrently with the Elric brothers that are equally as intriguing. Often in anime with large cast’s you don’t get a lot of character development for character’s outside of the core protagonists, usually just learning who the secondary characters are based on a character trope or really quick, surface level explanation. That’s not the case here. By the end of the series you’ll have learned so much about most of the character’s and the world of Amestris that you’ll feel like you went on the journey for the Philosopher’s Stone with them. Learning more about the character’s is also present in a fairly natural way and isn’t shoehorned in to fill episode run-time.

As with many great pieces of media, Fullmetal Alchemist Brotherhood resonate’s so well with it’s fan’s because it makes them feel things. Whether that be excitement, humour, anxiousness and even sadness. Brotherhood has all of that, it’s an absolute emotional roller-coaster at times. It often falls back to comedy moments to break up story heavy scenes. There are also a number of moment’s throughout the series that will have you staring at the screen in shock due to what has, or is about to go down. And because it does such a great job at developing extremely likable characters, when one unfortunately dies I felt a real sense of sadness and loss. Not many other series manage to generate the same response. 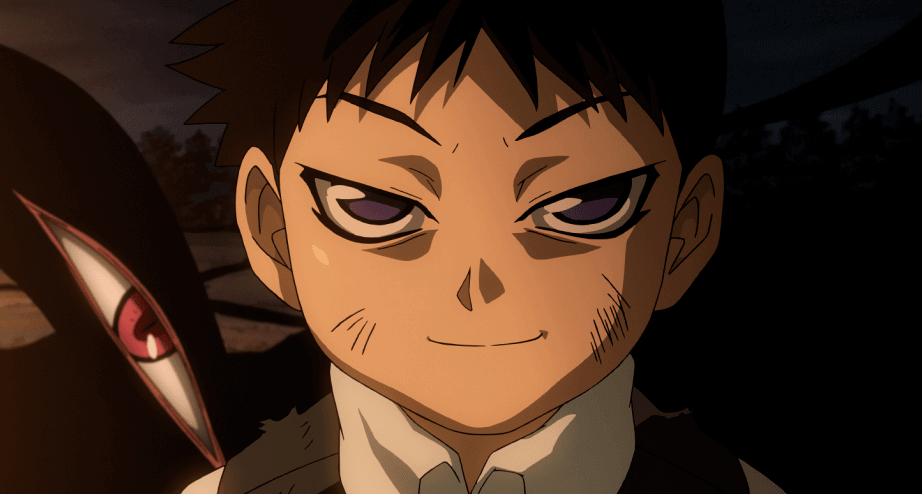 Brotherhood also features many of Funimation’s top talent who have come together to produce one of the best English dub’s of an anime you’ll find. Lead by Vic Mignogna (Edward), Maxie Whitehead (Alphonse) and complemented incredibly by Travis Willingham (Roy Mustang), Christopher Sabat (Alex Armstrong) and J. Michael Tatum (Scar). I could give individual props to the whole cast, as they’re all top tier talent but you don’t need to read all that. Just know that the performances and casting’s are terrific.

This review isn’t just for the series but also the recent re-release of the series Blu-Ray set from Madman Entertainment. The full Brotherhood series is now available in a 2 part set, condensed from the previous 5 volumes released in the past. Part one includes episodes 1-35 across 5 discs, while the part 2 set includes 6 discs containing episodes 36-64 as well as a bonus disc containing the OVA episodes.

I’m a sucker for special features and thankfully there are plenty of them available here across the two sets. The first set includes the standard clean opening and endings often found in most home releases but also contains episode commentaries on key episodes with members of the English cast and ADR director’s. Part 2 however includes even more, it too has the clean opening and closings and commentaries but also has some hilarious recorded outtakes and the previously mentioned chibi OVA episodes you can enjoy after finishing the other 5 discs. There has never been an easier and cheaper way to own the Fullmetal Alchemist Brotherhood series so I’m so glad this show has been re-released and treated with care. 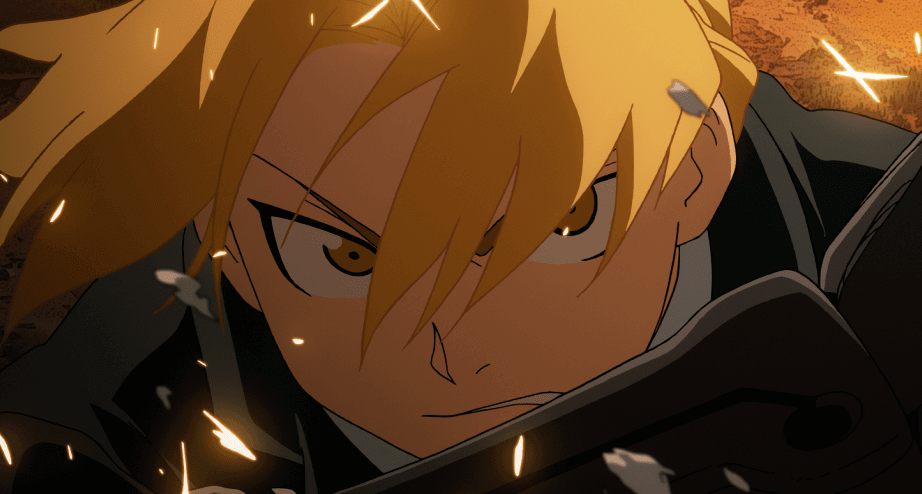 If you haven’t guessed already, I love Fullmetal Alchemist Brotherhood. It has everything I look for in a great anime and coming in at 64 episode’s is just perfect. It’s long enough to present you an incredibly engaging story-line and flesh out enough of the world and it’s characters but not too long that it’s narrative is excessively stretched out or requires investing hundred’s of episodes. If you haven’t seen this show, please go and check it out. It’s characters, story-line and performances will make it hard to find a series afterwards that can stand up to the level of quality you’ll find here.