The Far Cry series has become a staple franchise for Ubisoft since midway through the PS3 era when Far Cry 3 released and revolutionised what people thought of the series, and shifted it’s design philosophy over to what we’ve seen not only in subsequent Far Cry games, but also other titles from the Ubisoft family of studios. Now Far Cry 6 has released, and while it’s core structure will be very familiar to those that may have played any of the previous games, it does introduce a number of new mechanics and technical tweaks to set itself apart. 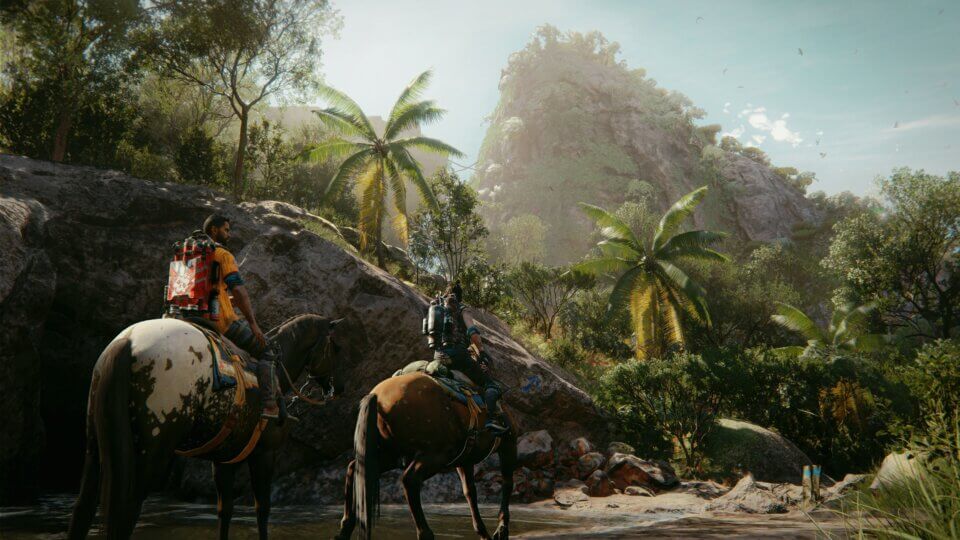 Like earlier games in the series, Far Cry 6 is a first-person action adventure game set in a large scale open world, this time around returning to the more jungle and tropical locales featured in Far Cry 3 and 4. Although this time around, cutscenes are presented in third person, allowing you to see your player character within the scene and how they interact with the other character you’ll encounter throughout your journey. I really enjoyed this change up as it allowed me to see my character’s emotions and reactions in scenes and allowed me to empathise with the character more than having me ‘be’ the character at all times when sticking to the first person perspective.

You’ll also get choice when it comes to the player character too. You play as Dani Rojas, a guerrilla resistance fighter attempting to take down the game’s main antagonist. But you have the option to tweak Dani and their playstyle to suit the way you choose to play, including playing as either a male or female Dani, both of which are performed and voiced very well by their respective actors. 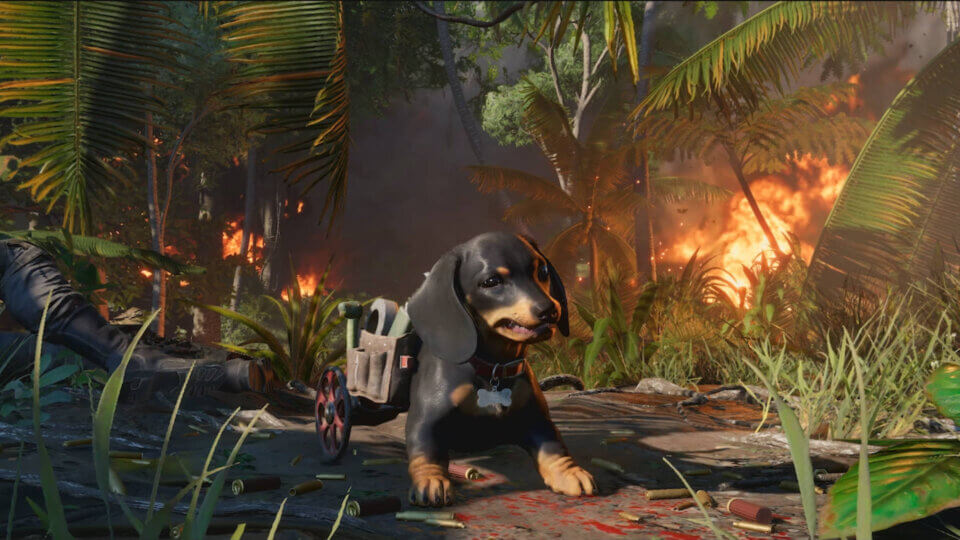 Far Cry 6 takes place in a fictional island nation called Yara, it’s very much inspired by the Caribbean and Cuba. Yara is run by dictator Anton Castillo, who many in-game refer to as “El Presidente”, much of the nation follow his rule, enforcing his harsh and strict lifestyle but there are many that have had enough and are attempting to fight back. That’s where your character comes in. Obviously you won’t be alone on your journey though, it’s up to you to build relationships, topple enemy camps and forces and put an end to Anton’s sinister regime.

I really liked that Far Cry 6 didn’t feel like a mostly solo adventure experience through the jungle. The other character’s and crew that Dani gets to join and interact with genuinely brought a lot to the story and my overall engagement with the quests. And most of these characters also get their own moments to shine and character development arcs with Dani too which is something that has been on the rare side with Far Cry games. Far Cry has typically had a blank slate main character and its prime focus on it’s villains, so I was pleased to see the effort that had gone in to highlight it’s diverse cast of characters this time around.

Saying that, the villain continues to be incredibly unforgettable. Giancarlo Esposito’s Anton steals every scene he’s in, playing a crazed dictator that can one moment be a very calm and collected character, that you at times could relate with his ideals, albeit twisted, then the very next moment flips to be a ball of rage committing horrific crime after crime. They certainly got their money’s worth out of hiring a professional actor, known for previously playing iconic villains. It surprised me that with their focus on memorable villains we’ve never seen Ubisoft utilise Hollywood actors in key roles in the past. With this being a success, who knows who we may see gracing the cover of Far Cry 7. 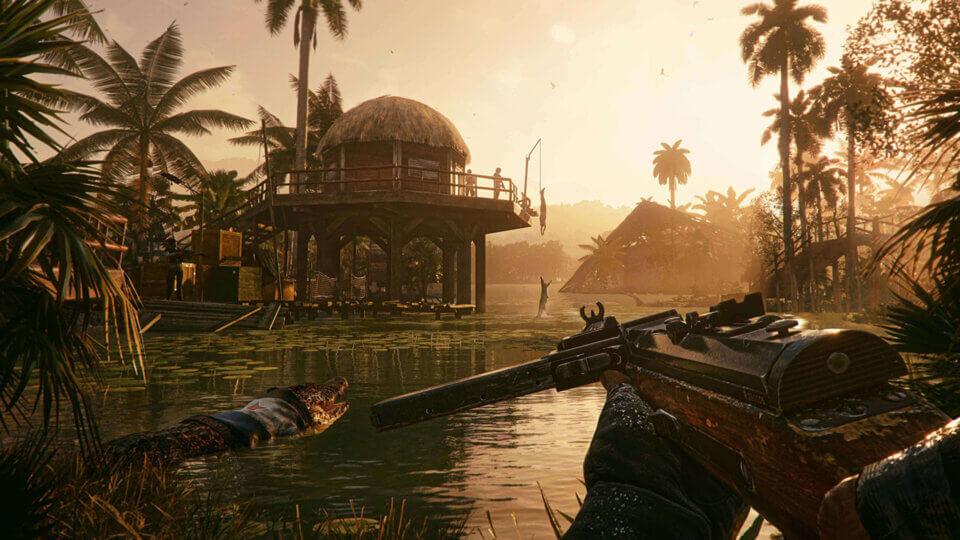 Thanks to being the first Far Cry game to launch on current gen hardware, it also looks and feels better than any previous game in the franchise too. I played through the game for review on PS5, and was often blown away with how great many of the environments looked. The sunsets in this game are also gorgeous. Though it was a mixed bag when it came to some assets, as the water crashing on the beach or coastlines for example didn’t look to be rendered in the same quality as much of the rest of the game and certainly not as good as rendered water seen in other current gen titles. It’s not disappointing to see in a game of this scale, just something that did stick out primarily because of how great most everything else appears. Especially after installing the game’s hefty HD texture patch available on the PS5 version. The gunplay, which is a core part of Far Cry also continues to feel great, and like in Far Cry 5, the weapons have a real sense of weight to them, which is further enhanced on PS5 as the game utilises the DualSense’s haptic feedback and adaptive triggers too.

When it comes to the moment to moment gameplay, if you’ve played a Far Cry title in the past, you’ll know what to expect here, mostly. The Ubisoft formula of clearing the objective points on the map is a really fun process and not as much of a chore here as it has been in earlier games, primarily because I found them to be more fun to do. But if you’re not a fan of the Ubisoft game design, Far Cry 6 will do little to win you over. There have been some new systems implemented here but the underlying core gameplay loop remains faithful to what Far Cry fans expect.

One of the biggest changes comes with the implementation of RPG style gear based loudouts. Playstyle specific load outs can be tweaked by swapping out your inventory, with weapon configurations and apparel tweaks offering a wide array of damage and resistance types to Dani and their weapons. Where skills were previously ties to a progression tree, now stat boosts and some new abilities are tied to the gear you equip onto Dani, further allowing you to build out your Dani the way you choose that will suit your desired playstyle. Whether you play Far Cry games steal thing around in the shadows or go in guns blazing, there are plenty of options for you. 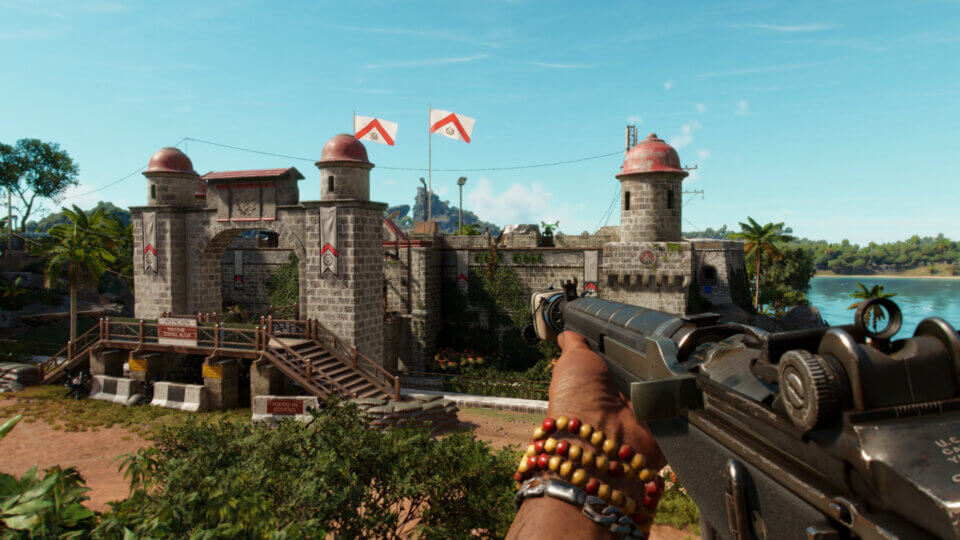 Overall, I think I preferred the skill tree progression approach of some of the earlier games. A lot of games these days implement gear based progression but most of the time I feel like I’m micro managing my character rather than getting into the game and having fun. Having to manage and maintain headgear, shirts, pants, shoes and accessories does begin to get tedious throughout the roughly 35 hour adventure.

I didn’t mind the game’s introduction of the new Supremo device though. It’s an upgradeable backpack for Dani that adds further perks to your overall load out and acts as an ultimate move or sorts. It certainly got me out of a couple of close calls when in combat as each of the backpacks grant a special ability such as a reign down a torrent of missiles or explosive poison gas. These special abilities have a cool down time before they can be used again, preventing them from becoming to overpowered, but as mentioned the benefits they offer can be extremely helpful in boosting your overall perks and ability get get out of tight spots in combat.

The Fangs for Hire system introduced in Far Cry 5 has been overhauled and is now referred to as the Amigos system. It allows you to recruit animal companions to fight alongside Dani and provide various perks based on your currently equiped animal. There are a number of Amigos you’ll be able to recruit and equip throughout your adventure, but my personal favourite remained Guapo, the very first creature added to your arsenal. He’s a crocodile you can command to attack enemies and is able to take quite a number of hits before falling in battle. He’s also been animated so well that it’s a joy to watch him scurry behind you as you traverse through the islands of Yara. 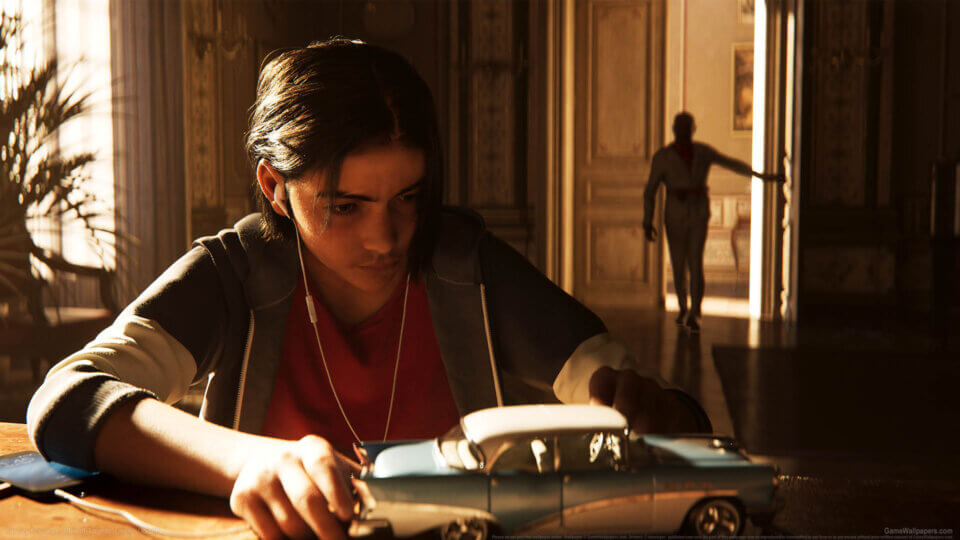 Overall, Far Cry 6 is a great entry in the franchise and is suitable for first time players or series veterans. It retains many of the core features players expect from a Far Cry game, but it’s introduction of many new systems, graphical improvements, along with another iconic villain makes it a strong contender for the best Far Cry game yet. While I wasn’t completely sold on all of it’s RPG inventory mechanics, it’s a great modern entry and the most engaging title in the series for myself since Far Cry 4.