Days Gone is the latest first party Sony release for the PlayStation 4 and is developed by Bend Studio. Now when it comes to Sony’s first party owned studios, many of them have become household names over the past few years thanks to the top notch titles they’ve released. Everyone knows Naughty Dog, Santa Monica Studios and Guerrilla but you may not be as familiar with Bend Studio because they haven’t released a console title since Syphon Filter: Logan’s Shadow which launched on the PS2 in 2007. Since then they have worked with Sony developing titles for the PSP and PS Vita. But now the team have been hard at work on an incredibly ambitious post-apocalyptic game that does run into some technical problems but houses a really enjoyable adventure all about survival. 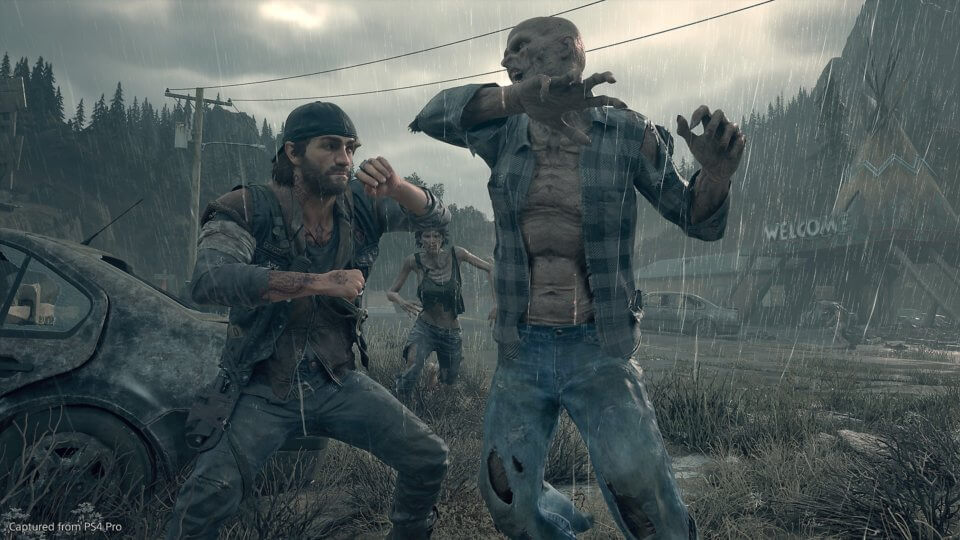 In Days Gone you take the reins of Deacon St. John an ex military man turned mercenary bounty hunter in the aftermath of a virus outbreak. The majority of what you’ll play in Days Gone is set 2 years after a global pandemic outbreak that has wiped out most human life on the planet. Those infected by the virus have been turned into ravenous, cannibalistic creatures known as Freakers. The Freakers have many of the same traits a zombie would except these creatures are still alive but have been affected mentally and physically by the virus.

In the years since the outbreak Deacon has found his place in a biker gang known as the Mongrels and not long into the game discovers that his wife Sarah may have survived the outbreak. This sets into motion the core narrative of Days Gone’s main story.

The main questline of the game is actually quite a lot longer than I had expected it to be. Just based on the average length of other Sony published open world games I had expected the game to be a solid 20-30 hour experience but you can easily double that time if you want to experience the whole story, side missions and collectables the game has to offer. 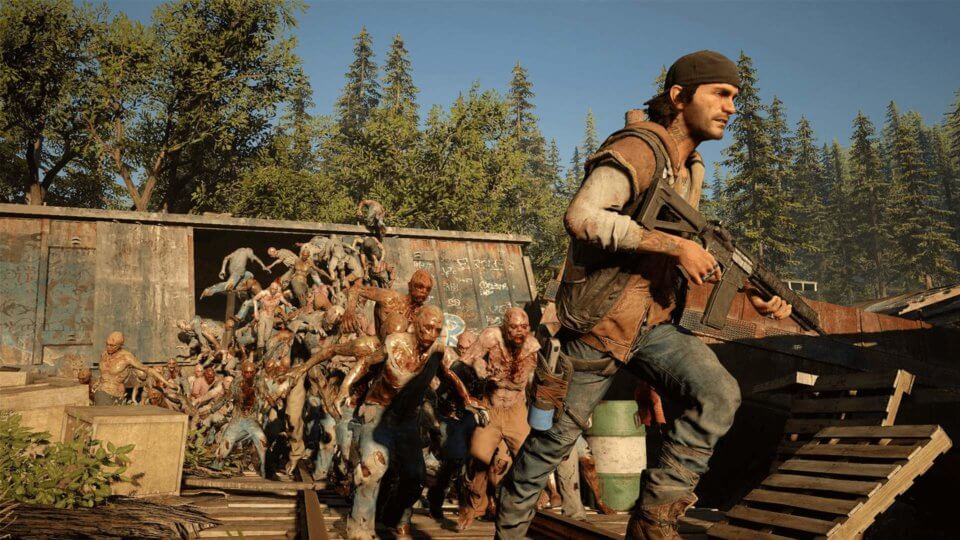 When I first started up the game I spent the first few hours sticking solely to the main questline but quickly realised this probably isn’t the way Days Gone was designed to be played. Rushing through and just trying to absorb the story of the main questline is actually doing a disservice to the game and yourself as you won’t get the chance to enjoy the full Days Gone experience. This is a world that needs to be explored. Some of my favourite moments playing Days Gone came from accidentally stumbling upon a Freaker nest or horde, rescuing another survivor trapped in a fire fight with Marauders or being stuck out with little fuel, night on the horizon and a storm rolling in, forcing me to put all of my survival skills to the test. All of which happened outside of any mission.

You’ll be doing most of your adventuring through Oregon riding on your trusty motorbike. Well actually it doesn’t start out too trusty. Towards the start of the game I found the bike to be a bit of a hindrance due to how heavy it was to control and the default fuel tank guzzling fuel within minutes, requiring me to have to find places to fill up while on the way to way-points or remember where I had left fuel cans previously. But the bike levels up and develops throughout the game just like Deacon does. You’ll eventually earn upgrades for components like the exhaust, engine, storage capacity, fuel tank among other things that takes the bike from being a chore to being a really helpful tool that is crucial for your survival in this world.

Deacon also has 3 skill trees that you’re able to spend your earned skill points in to unlock new abilities that increase Deacon’s proficiency in melee, ranged combat and survival. Skill points are earned as Deacon levels up and earns experience from completing quests. When you’re not drifting around on your bike, you’ll be scavenging items found throughout the world that are used to craft moltovs, new arrows for your crossbow and to customise your melee weapons to make them even more deadly. 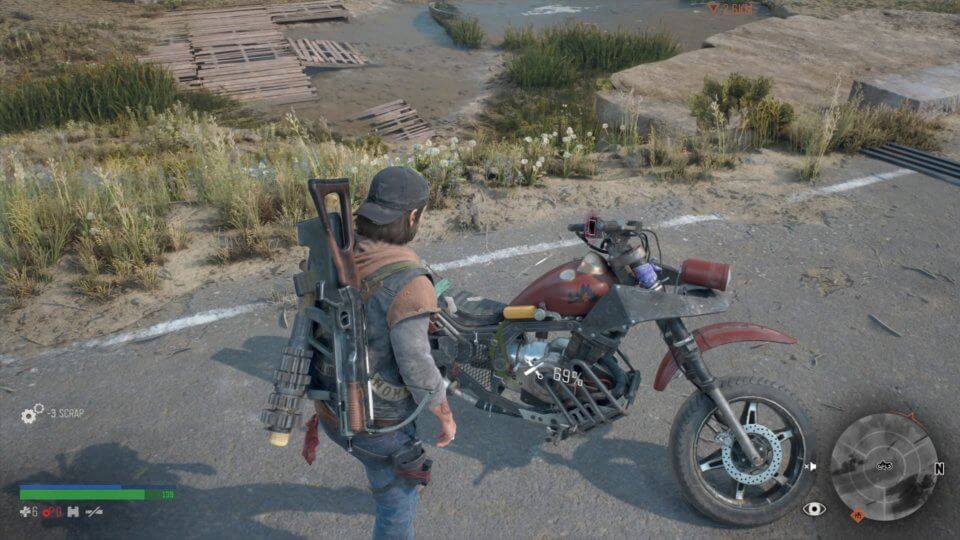 You’ll also become allied with a number of camps around the in-game world. Any time you kill a Freaker, you’re able to collect it’s ear which act as a form of currency at the various merchants that exist within these camps. You’re able to cash in collected ears at any of the camps to earn respect with those people and as your reputation increases with a specific camp you’ll have access to their weapons and bike upgrades. When riding through the hills of Oregon you’ll often come across survivors in trouble. They may be getting attacked by Marauders or be getting overwhelmed by Freakers. Choosing to rescue them will present you the option to send them back to a nearby camp that not only grants them refuge but will increase your reputation with that camp, providing a nice continuous loop to character growth and progression with the other survivors in the world. This progression loop combined with the various collectables, side missions, Freaker Nests and clearing the Nero research sites left me never short of something to do outside of the main story.

The tagline for Days Gone was ‘this world comes for you’ but it probably should have been ‘everything in this world comes for you’ because Days Gone does a great job of making you feel like you’re never safe and that everything wants you dead. There are a number of different types of Freakers, each with their own attributes and weaknesses as well as other human survivors that act like your standard post-apocalyptic bandit style gang members. They’ll do their best to try and knock you off your bike, beat you to death and steal your gear. But it’s not just Freakers and Marauders you need to worry about. The virus affects all life on the planet which means there are infected wildlife you need to worry about too. This means you’ll often be fending off infected birds, wolves and even the odd bear. Freakers aren’t too much of a problem to take down but things can turn really fast if you attract the attention of a horde. There’s immense strength in their numbers and one wrong move will have you overwhelmed in seconds.

Because each enemy type, whether that be Freakers, Marauders or animals are powered by their own AI it’s actually possible to pit the different types against each other. There was always something really satisfying about invading a camp of Marauders, throwing out a trap that attracts the Freakers and then sitting back and watching them take each other out, thinning out the numbers of enemies you would have had to eliminate yourself.

Aspects of the world such as time of day and weather also directly affect how the game plays and how the Freakers act too. Freakers often nest during the day and come out in greater numbers at night to feed, so being stuck out in the wild with little fuel as dusk starts to roll around can get scary pretty quickly. Rain will also cause your bike to slide around and handle differently but you’ll also attract less attention from Freakers during a downpour thanks to the constant noise of the rain. Systems like this help Days Gone feel dynamic, realistic and really help the world feel grounded and believable.

Days Gone runs on a modified version of Epic’s Unreal Engine 4 which was surprising to me because most of Sony’s first party titles typically run on in-house proprietary engines and Unreal generally isn’t used for open world games due to some of it’s technical limitations. That said, Bend have done a good job modifying the engine to meet their needs and Days Gone’s visuals look great, with the character models, textures and lighting really popping on the screen. Special mention needs to be given to the weather system as well. It combines with the lighting to create realistic depictions of water and mud, both of which affect how your bike travels on surfaces. 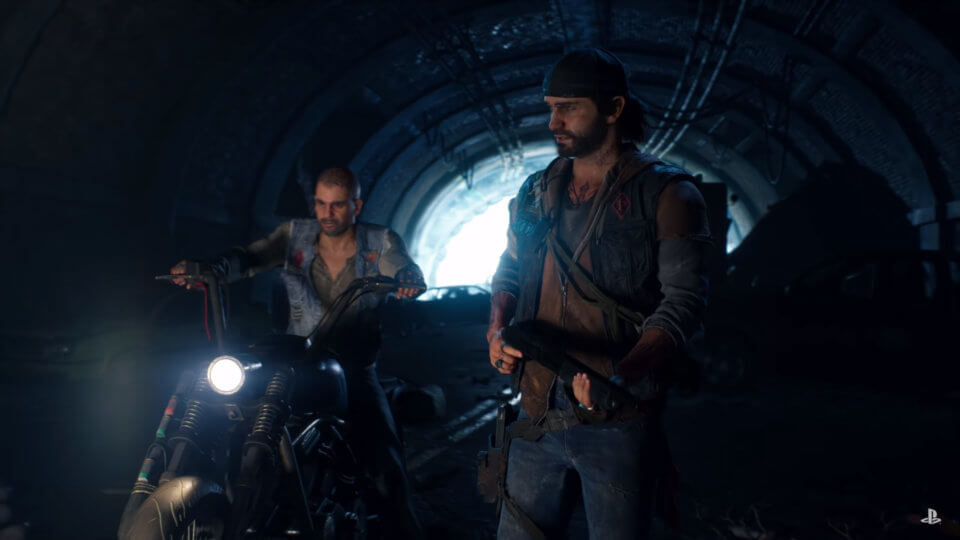 Although when you’re bending an engine to do things it wasn’t specifically designed to do you’re bound to run into a few technical problems. Days Gone does suffer from some pop in of assets, has some pretty lengthy loading screens, one of which you need to sit through in almost pure darkness before hitting the main menu and also has occasional frame rate drops. Surprisingly the moments where my performance suffered weren’t when there were hundreds of Freakers rendered on the screen but more when travelling through the open world and entering new areas. Throughout my time reviewing the game Bend have released a number of patches that are rectifying some of the game’s bugs and performance problems. It’s still not a technically perfect title at the time of publishing but it’s getting better with each update and has come a long way since the pre-day one patch.

But enough about rendering performance, it’s time to talk about the performance of the cast. They’re fantastic. Sam Witwer, Courtnee Draper and Jim Pirri steal the show as the three main characters in the game and each have been performance captured and scanned into Days Gone well. While there were characters I felt were stronger or better written amongst them I couldn’t fault the actual performances each gave for the title.

Other than witnessing the sheer number of enemies the game could render on-screen at once, I didn’t really come across anything in Days Gone that I hadn’t seen implemented in another game. While that’s certainly not a bad thing I was waiting for the game to push the envelope and deliver something I hadn’t witnessed before, something that I usually received when jumping into other first party games in the PlayStation catalogue. Saying that, I really enjoyed what I played here and will continue to go back to Days Gone and continue clearing out Oregon and wrapping up those remaining collectables. Bend have laid some really solid ground work here with Days Gone. It was their first console title in 12 years and if they continue building out the world of Days Gone, take on player feedback and fix the gameplay issues people are having issues with then the sequel game will be well on it’s way to being a title ‘freak’ out over. While there were some technical issues I encountered along the way and I didn’t encounter that ‘Sony level magic’ (which is a pretty high bar to hold things against) I did have a lot of fun with Days Gone surviving the ever-cruel world and doing it in my style.