There are a number of anime that whenever I see or hear mentioned bring back a ton of nostalgic memories. The Cardcaptors series is one of those shows. I spent many a morning watching the show before heading off to school and now 17 long years after the original series aired we are finally getting the next chapter in the story. 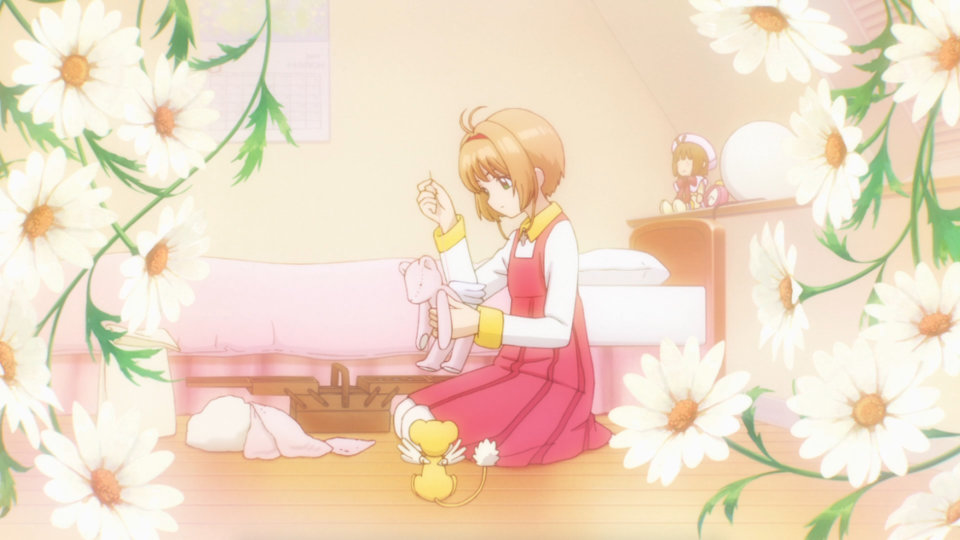 Cardcaptor Sakura Clear Card is a direct continuation of the original series and presents the next chapter in Sakura’s life. She and the cast are getting older, and the story when not dealing with the supernatural, focuses on Sakura entering junior high school. Which of course comes with it’s own set of changes and challenges. Li comes back from Hong Kong and things are looking up for Sakura, but after a strange dream featuring a mysterious, cloaked figure, Sakura wakes to find that her Clow Cards have turned clear and it’s time to strap on the skates again and recapture them.

Just be aware, the Clear Card series assumes you have seen the original series or read the manga. It doesn’t really hold your hand too much or fill you in on the events of the original show beyond some high level mentioning of key events or concepts. To get full enjoyment out of the series you will need to have some familiarity with the returning core cast of characters and their individual back stories, motivations and relationships with the other characters. Long time fans of the franchise will love seeing the gang back together again and Sakura’s next journey and will appreciate what Clear Card is trying to do the most. 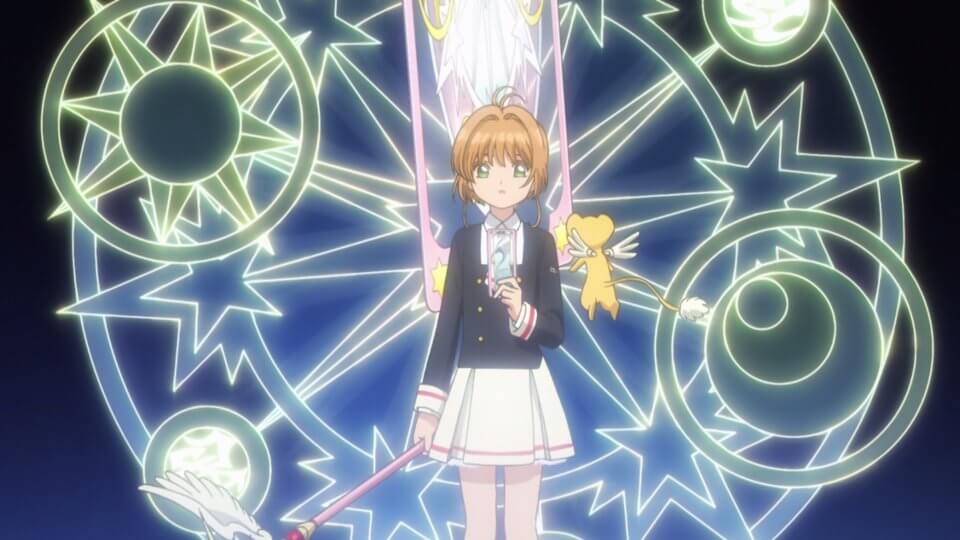 One thing you’ll notice right off the bat is that Clear Card looks very pretty. The Cardcaptor series has never looked so good, with the animation and character designs coming a long way since the 1998 series, looking incredibly vibrant and crisp on screen. A key highlight being the scenes where Sakura is capturing new cards, these are animated extremely well. The scenes combine traditional 2D animation and 3D CGI to create dynamic sequences with a lot of action and a lot of impressive flowing and moving parts.

The use of CGI did stand out during certain effects but it wasn’t overly distracting or appearing to be too out of place. Quite often it’s used in battle sequences to pull of some impressive effects. So while I’m normally completely against noticeable CG, it was used pretty well here and complimented the action sequences quite well. 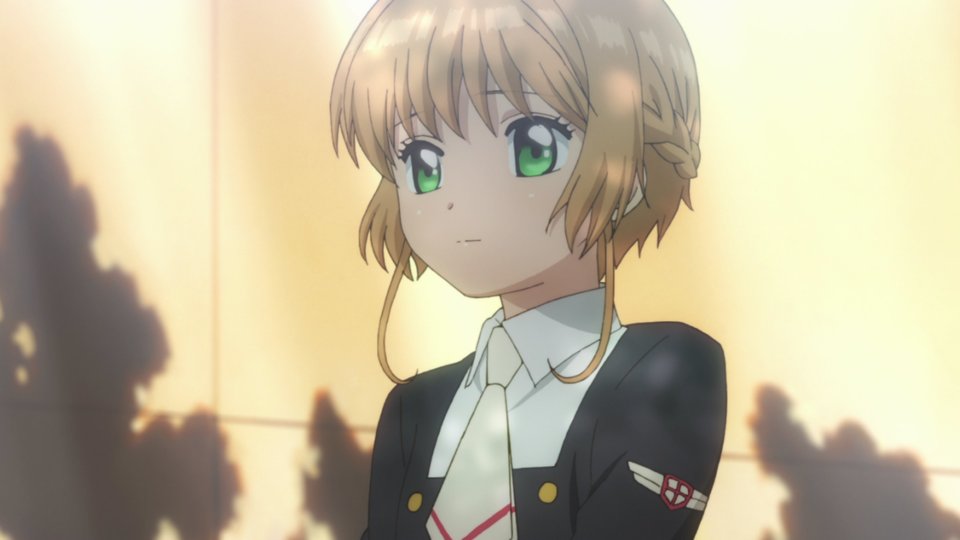 The key aspect that drew me into the Cardcaptor series all those years ago were the collecting of the cards, seeing the new abilities and witnessing how Sakura would combine the cards already in her arsenal to take down the newest threat, with the original series following the ‘monster of the week’ formula, and then seeing how that newly captured card would be utilised in future episodes. I was really glad to see that this aspect of the show remained intact in Clear Card, even if it has taken a bit of a back seat to the slice of life and romance aspects of the season.

The action in Clear Card has been dialed back a bit from what I remember being present in the original Cardcaptor Sakura series and this series seems to be more evenly focused between obtaining the cards and Sakura’s life with her friends at school or at home. This was a bit disappointing at first, but I grew to enjoy the blend between slice of life, comedy, romance and action scenes that make up what Clear Card is going for.

Altough choosing not to continue with the ‘monster of the week’ formula the original series used did shake up the pacing of this set a bit. I understand shows normally take a couple of episodes to get going but this set of Clear Card was a bit of a rollercoaster with some episodes featuring a ton of action and plot progression and others focusing almost solely on Sakura’s school life and relationships, sometimes taking a couple of episodes to pull itself back on track and continue to progress the story I had grown invested in. But even though sections of this season were a bit slow, I am still intrigued in the overall story and definitely want to see where it goes from here.

The home release set of Cardcaptor Sakura Clear Card Part 1 contains the first 11 episodes across 2 Blu-Ray discs and as with many of the recent Funimation releases from Madman, it also contains a digital redemption code so you can also watch the series on Funimation Now.
The set also includes the prologue OVA Sakura and the Two Bears, it’s a 25 minute episode that fills in the gap between the Cardcaptor Sakura series and the start of Clear Card. It doesn’t do too much to fill you in with the events or ending of the original series like I though it would so if you haven’t seen the original series before or would like a refresher, I’d suggest giving it a watch before checking out Clear Card. Along with the OVA the set also includes the standard clean opening and closing themes that can be watched from the main menu. 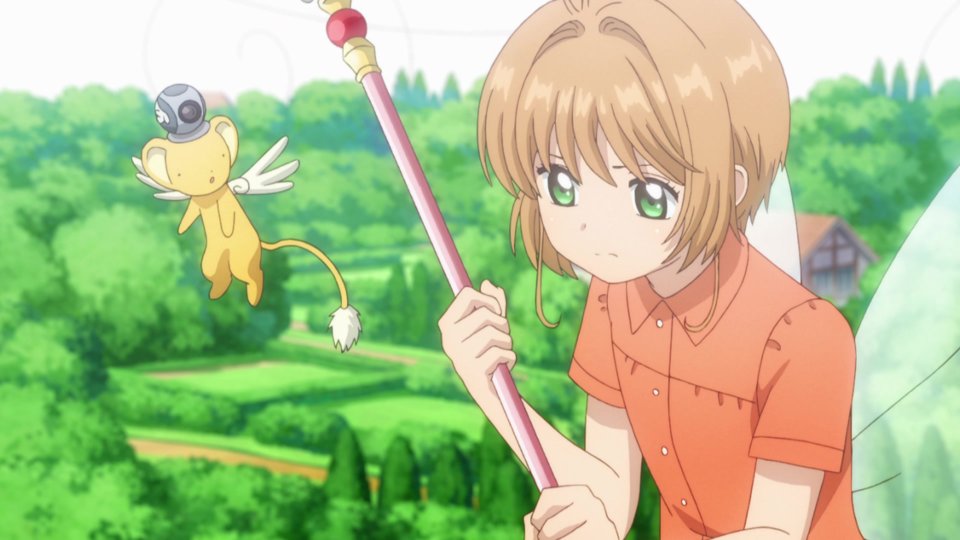 Overall I really enjoyed what was set up in the first set of Cardcaptor Sakura Clear Card. It brought back the characters I loved from the original series and after waiting a really long time, I was glad to see what Sakura would have to face next. While the pacing was a bit all over the place in this set I am definitely on board with the overall story it’s setting up and love the new crisp presentation and smooth animation the series has now received. I’m certainly looking forward to jumping into more episodes as soon as I can.

A Cardcaptor Sakura Clear Card Part 1 review copy was provided by Madman Entertainment for the purpose of this review.