Earlier this week I got the opportunity to head to PlayStation Australia and go hands on with the upcoming game from PixelOpus, Concrete Genie.

Concrete Genie has had my interest since it was first shown at Paris Games Week back in 2017. The game is PixelOpus’ follow up to Entwined and after playing it, it definitely carries that signature PlayStation flavour and charm. 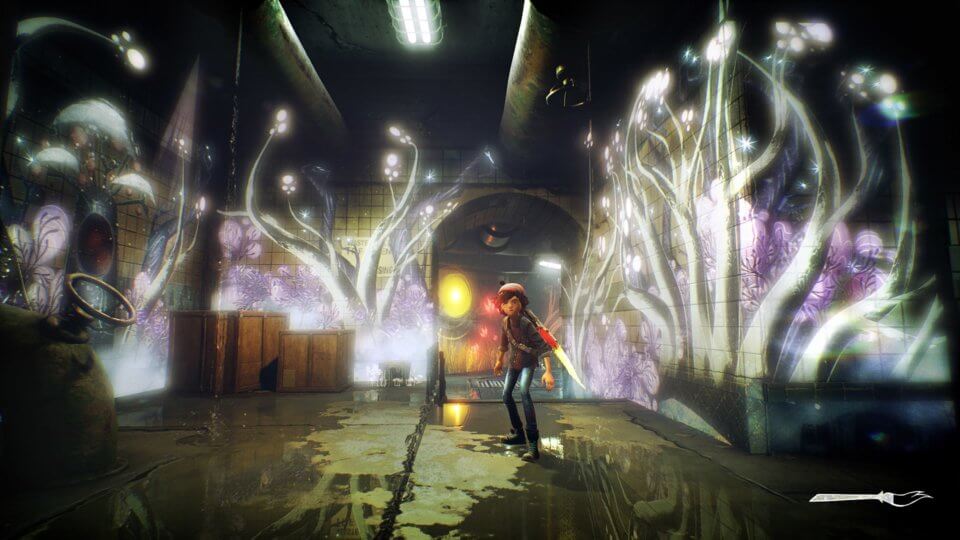 During my hands on I got to play through 3 separate sections of the game. Getting a chance to play through about an hour or so from the very beginning of the game, followed by a boss battle that showcased the game’s combat and ending with a dive into the VR component that will be coming as a supplemental mode for Concrete Genie.

Right off the bat the game made me smile. Upon viewing the opening cutscene of the game, which is presented in a hand drawn art style within a sketch book, I knew that the themes of the game, along with its music would likely result in some pretty emotional moments before hitting the end credits of the adventure.

The in-game cutscene that followed introduces the player character Ash, the town of Denska and the small group of bullies that plague the town and spend their time trying to make Ash’s life a living hell. 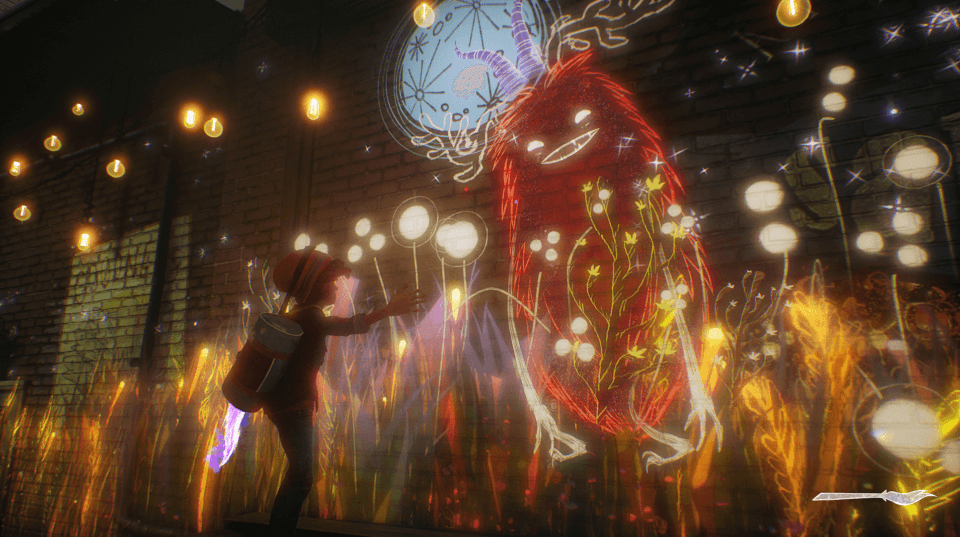 If you haven’t seen any of the Concrete Genie coverage out there you should know that this game isn’t a typical ‘PlayStation’ style game and because of its mix of genres it’s unlike anything I’d played before. It combines two key things that can be found within the Sony first party catalogue, third person action-adventure and experimental artsy games. Combining the likes of Infamous or Uncharted with the creative and intuitive freedom of Dreams (or any Media Molecule game really).

Concrete Genie is quick to start teaching you the ropes of it’s painting system. Instructing how the DualShock should be positioned and moved to apply paint to pages and objects. Your first task being to colour in the creatures inside Ash’s sketchbook. That is until the bullies resurface, steal your book and rip out all its pages. Leaving them scattered throughout Denska.

Upon taking control of Ash for the first time I was impressed with how the game felt and Ash seemed to have a nice sense of weight to him as he walked and climbed through the areas of Denska’s lighthouse.

Throughout my quest I uncovered some scattered pages from my destroyed sketchbook and a magical paintbrush that had the ability to bring my drawn creations to life. These creatures, known in the game as Genies are able to be hand customised using components found in the scattered pages, so each of your Genies has the potential to be your own creation and completely different from the ones your friends may make in their game. The Genies each poses a signature power, such as breaking open boarded areas or lighting fires and upon making your way to the top of the lighthouse and befriending my first Genie, the main plot of the game became clear.

Denska has become a mostly abandoned and polluted town and it’s up to Ash and his magical paint brush to return the town to it’s former glory and restore it’s beauty. Ridding the encroaching darkness, befriending Genies and regaining the lost pages along the way. 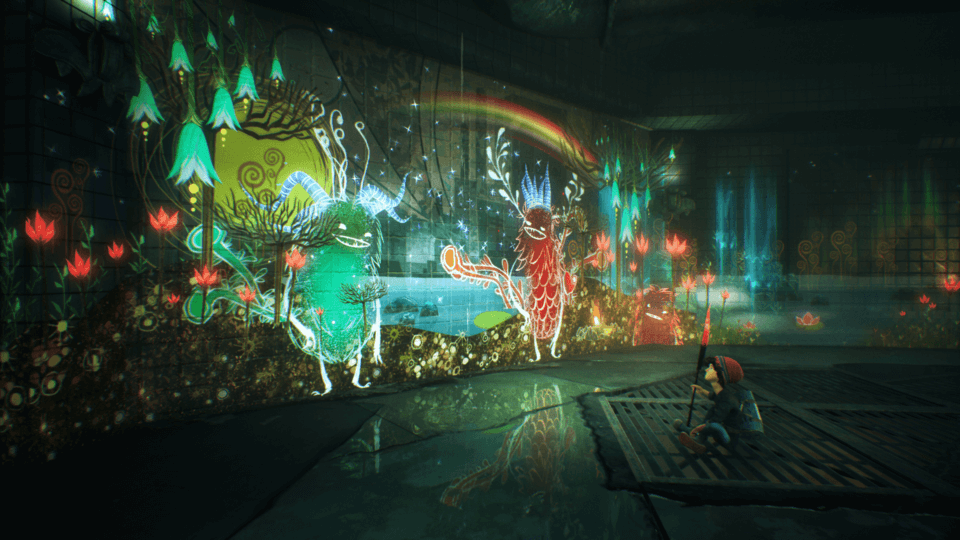 I spent the rest of this section completing a few of the subsequent quests, restoring some of the lights around Denska and discovering that the bullies seem to be a constant threat in the town. Crossing paths with them during your adventure quickly turns the game into a stealth driven hide and seek affair.

I was then fast forwarded to a section that takes place later in the game. I don’t know how far into the game this segment takes place but it was clear that Ash had a few more skills and techniques at his disposal than he had at the beginning.

This was a boss sequence that began with a cutscene, and due to some spoilers I can’t tell you what the boss was but I was impressed with the large open area that it took place in and that the game had this type of encounters at all. Until this point I had thought the game would focus on exploration and avoiding combat but that isn’t the case. 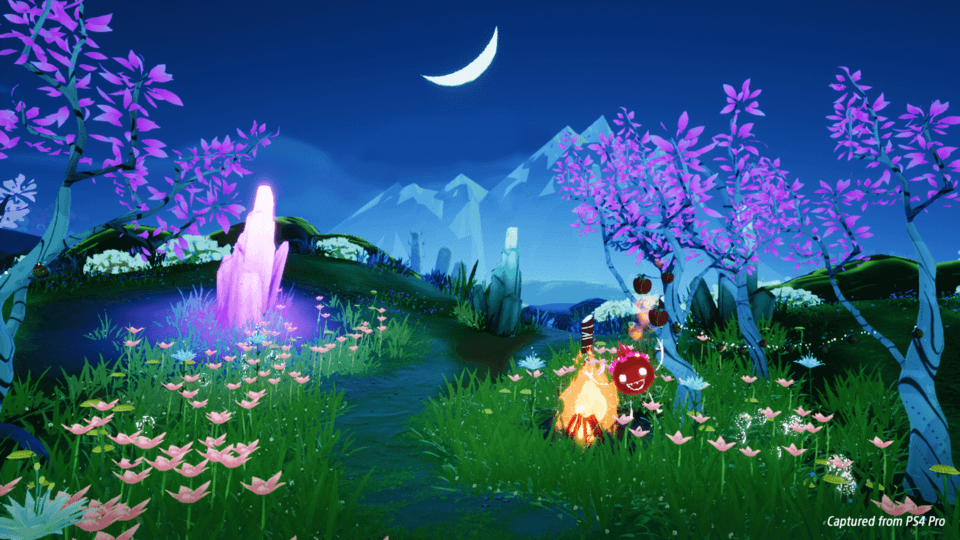 As mentioned this encounter took place within a large section of Denska and in between the time skip from the opening of the game, Ash had learned to Paint Skate, holding L2 while moving allows Ash to ride on the bristles of the brush and swiftly skate along the ground, allowing him to traverse areas quick and smoothly.

The encounter consisted of skating around the town, locating the fast moving creature, dodging its attacks and doing your best to break through its shield using Ash’s power paint ability and dealing some damage. After repeating a few times and managing to whittle the enemies health down to zero the section of the preview ended and quit back to the main screen.

From here I jumped into Concrete Genies’ VR experience. And it quickly reminded me why I love VR. As with all good VR experiences, it was quickly immersive and I found myself smiling multiple times while waiving the two PlayStation Move controllers that can be used during this aspect of the game through the air. 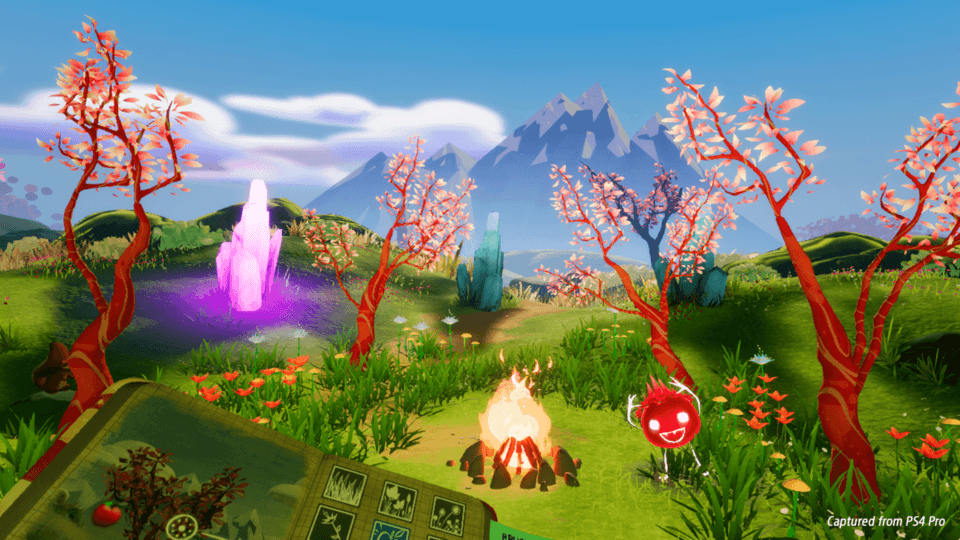 The VR portion is a supplemental mode to the game and I was told that it sits completely separate to the main campaign and creations constructed within this area aren’t transferred to the main game either. The VR portion is a first person creative space that allows you to freely paint in 3D space using collected brushes that easily lay down things like tress, grass, flowers, fire pits and lights. Allowing you to create some really impressive and visually appealing art pieces and environments even if you don’t have an artistic bone in your body.

In one hand you hold Ash’s sketch book which contains all of your unlocked ‘brushes’ that act like customisable templates. It is essentially what the paint palette would be to a traditional painter. The other hand controls Ash’s magic brush. Using the brush and pressing it against the book will change the selected brush preset and allow you to pop down a new type of creation in the environment. 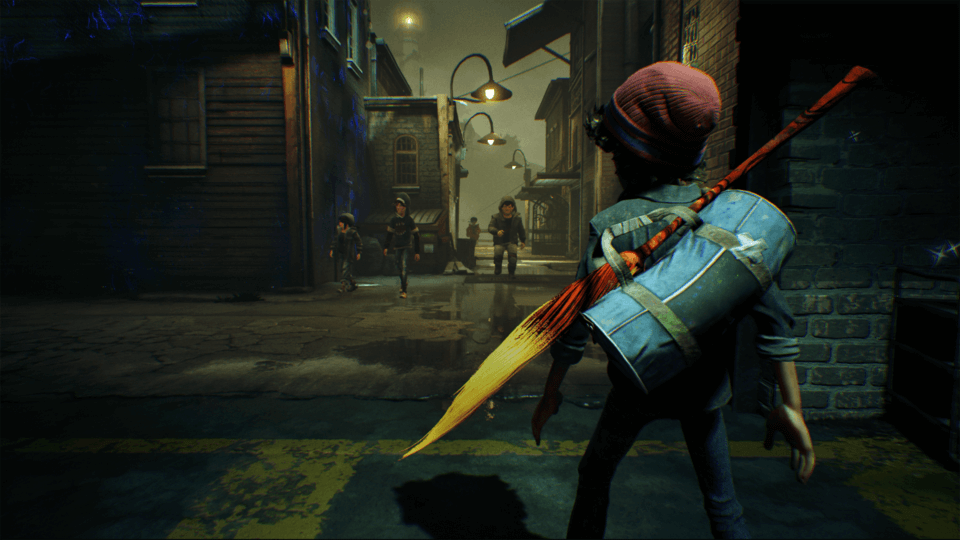 I had a really fun time standing in a field, gradually populating it with grass and flowers of various colours before adding a moon, stars and a few fire pits, turning it into a living night-time scene. Even though it has no impact on the main game, I can see myself getting lost in the VR mode on occasion just to escape for a while and flex my creative side.

I’m really quite excited to see more of Concrete Genie based on what I’ve played of the game so far. Being a title with an artsy focus it’s not going to attract everyone but I think those that are into it are going to love what it’s trying to do creatively and it’s charming papercraft/claymation art style that I found quite reminiscent of the Coraline film. Concrete Genie is set to launch exclusively on PS4 on October 9th.