Originally released in 2004 for the GameBoy Advance, Chain of Memories follows directly after the events of Kingdom Hearts 1 with Sora, Donald and Goofy following Pluto along a path which eventually leads them to Castle Oblivion.

This begins the events of Chain of Memories as Sora continues his journey to locate Riku and King Mickey…Again.

Upon entering the castle, the group are greeted by a man in a black robe that tells them the answers they seek are within the castle but they will need to give up something to find them.

Sora and crew head off, traversing the floors of the castle to find their friends. Inside the castle we meet numerous characters who all wear the black robes and are known only as ‘The oganisation’, a group of 13 individuals each possessing different powers and abilities. We discover their main goal for this game is to claim the Keyblade from Sora.

Members of the Organisation believe the best way to achieve their goal will be to control Sora so they use the abilities of a girl known as Namine who resides in the Castle. Her abilities allow her to replace Sora’s real memories with fabricated ones.

After fighting his way to the top of the castle being fed false memories the whole time, Sora encounters Namine in person. She comes clean and tells him that his current memories a fake and have been created by her under orders from Organisation XIII. 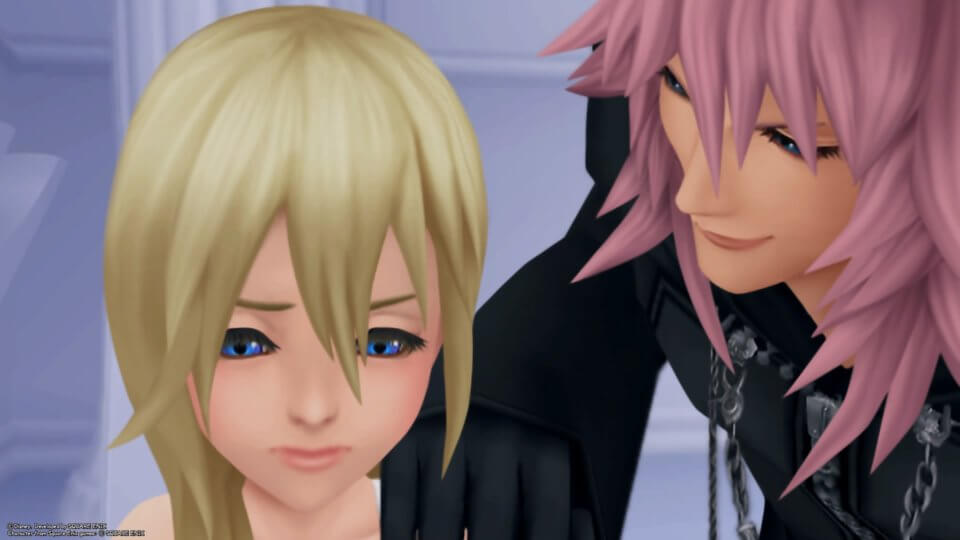 Namine tells him that to regain his real memories she would need to put him into a deep sleep to repair them. Sora and the group agree and enter large egg shaped pods where they will fall into a long slumber.

Meanwhile as the events with Sora inside the castle are unfolding Riku has escapes from inside the realm of darkness and has also made his way to Castle Oblivion, lead by the a mysterious voice that turns out to be Ansem’s.

Riku also battles his way through the castle constantly fighting to keep the darkness within him suppressed. 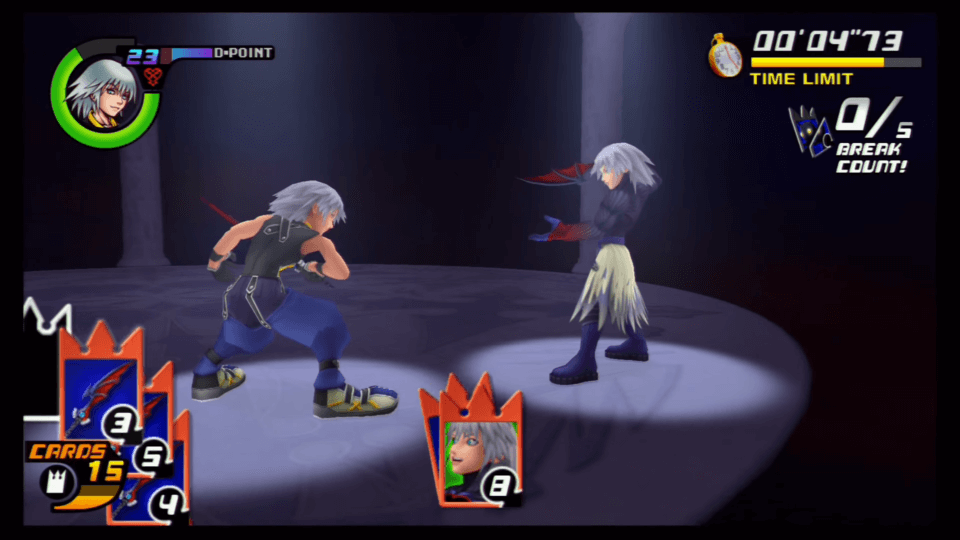 The members of Ogranisation aware of what resides inside Riku try their best to pull the darkness out of him and use the opportunity to further their goals.

They eventually succeed and Riku succumbs to the darkness again but when all seems lost, Mickey appears and helps him and helps him fight back his dark desires.

Following this Riku learns that the voice he heard at the beginning wasn’t Ansem’s but actually belonged to a man wearing red bandages known as Diz. 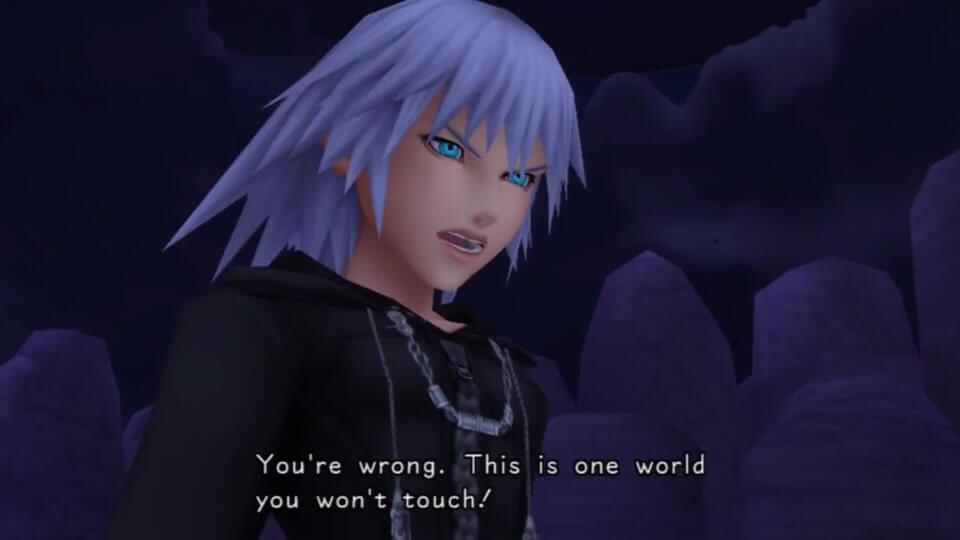 Riku continues to battle his way through Castle Oblivion and eventually reaches Namine. Namine tells Riku that she can remove the memories of Ansem so it will no longer have a hold over him but he refuses and says that he needs to face the darkness within him on his own terms.

And with all of the Organisation members inside Castle Oblivion except Axel defeated. Riku leaves Sora in the care of Namine and sets off again with King Mickey.

This leads us to the events of…

In what comes as a surprise to new players. When you start up Kingdom Hearts 2 you aren’t playing as Sora but instead you play as Roxas. A young boy that lives in Twilight Town, peacefully with his friends. That is until he begins recalling strange memories that aren’t his.

Through these flashes he learns that he has a connection to Sora and that he was the 13th member of the Organisation introduces in Chain of Memories.

His journey leads him to a strange mansion in Twilight town where he discovers a boy sleeping in a pod. This meeting was the final step in returning Sora’s memories and allowing him to awake from Namine’s slumber. It’s now been a whole year since the events of Chain of Memories.

Sora now reawakened with his original memories but no memories of the events from Castle Oblivion travels to the castle of Yen Sid with the guidance of King Mickey with Donald and Goofy continuing the journey with him.

Along the way the group encounter a new type of enemy known as a ‘Nobody’ similar to the Heartless they attack in swarms and come in various types.

Upon arriving at Yen Sid’s tower, the group are informed about the threat of the Organisation and their leader Xemnas and are tasked with stopping the evil plans of the remaining Organisation XIII members. 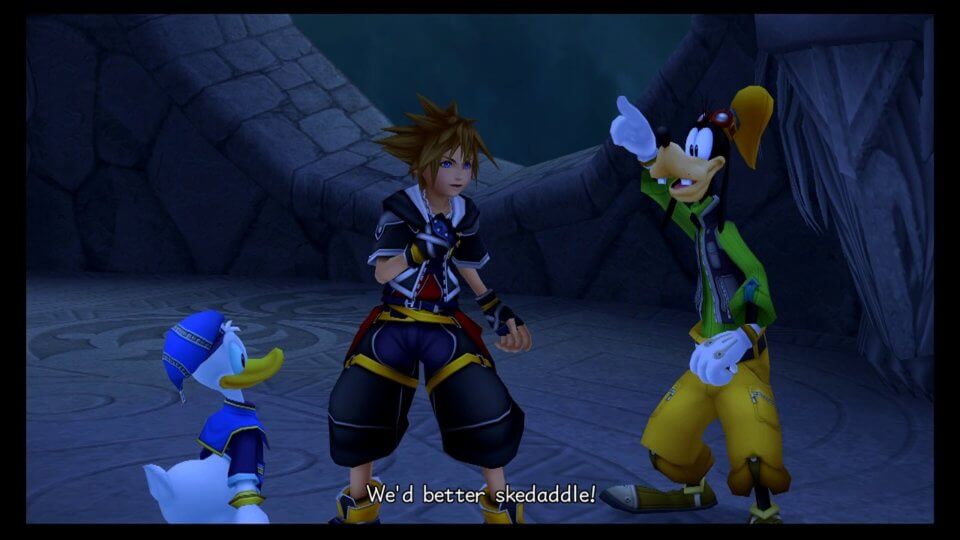 In a similar structure to the first Kingdom Heart game, Kingdom Hearts 2 sees Sora and the group travelling from world to world to eliminate the threat of the Nobodies and the Heartless all while learning more about The Organisation, taking down the remaining members one by one and working towards eliminating their leader Xemnas.

Throughout the events of the game we learn that Nobodies are born when a Heart is swallowed by darkness and produces a Heartless. They are the remaining parts left behind by the heart: the body, giving a Nobody form, and the soul, giving the Nobody life. However, only those with a strong will such as Sora are actually able to continue on as Nobodies. Those with the strongest wills manage to retain human forms. While most others turn into the creatures that we battle throughout the worlds in the game.

We learn that all of the Organisation members are Nobodies who have retained their bodies and are ultimately in search of Hearts as it’s what they require to become whole again. 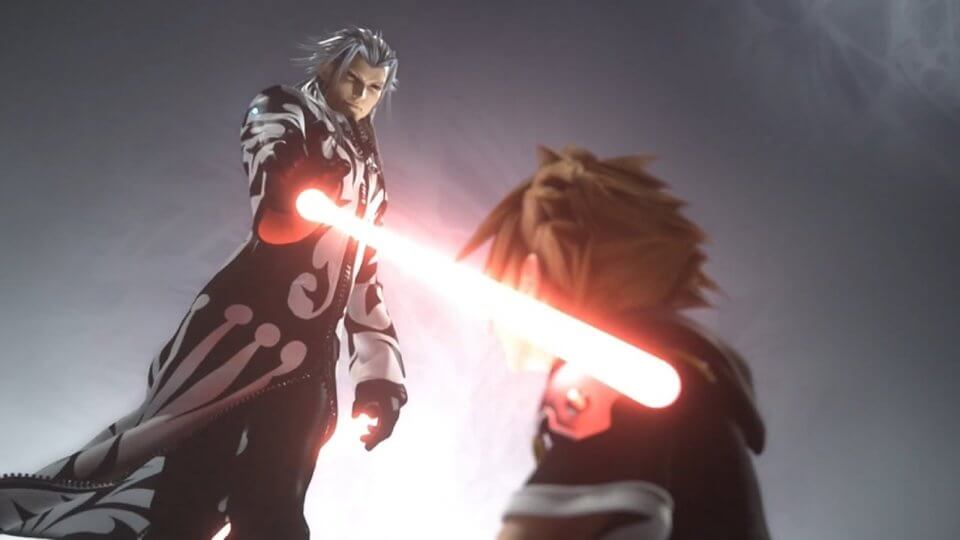 We also learn about the character known as apprentice Xehanort, the person who is revealed through later games to the the true antagonist of the series. King Mickey reveals that the Ansem from the first game is actually a Heartless born from Xehanort who simply took Ansem’s name. And when a Heartless is born, so is a Nobody. Xemnas, the leader of the Organisation is Xehanort’s Nobody form.

The game’s journey leads the group to ‘The World That Never Was’ for the final showdown with Xemnas. It’s here that Sora reunites with Riku (who is using the appearance of Ansem) who arrives with Diz, the character from the end of Chain of Memories and Kairi.

It’s here Sora learns that Roxas is his Nobody, created when he became a Heartless during the events of the first game and Namine is a Nobody form of Kairi, created when she lost here Heart.

Riku stops using his Ansem disguise and reverts back to his true human form and Diz reveals himself to be the true Ansem, refering to himself as Ansem, The Wise. The real Ansem that was overthrown by his pupils that went on to form Organisation XIII many years ago. 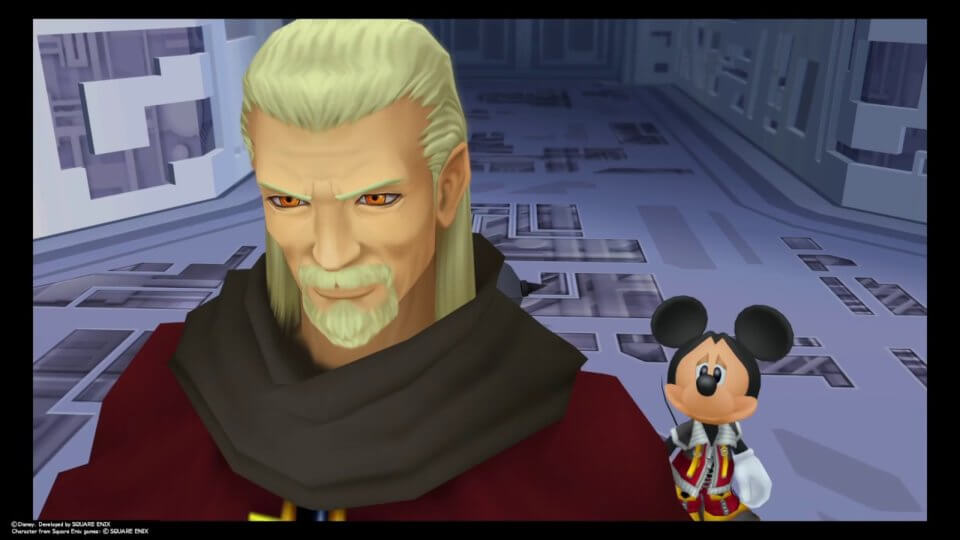 Before the final battle Sora and the group learn that Xemnas and the Organisation have created an artificial Kingdom Hearts which was pitched by Xemnas to them as a way they could recover their Hearts and become whole again but in fact was just a way for Xemnas to try and take over the world.

Sora and Riku manage to destroy the fake Kingdom Hearts before it’s able to be used and then together, the two of them take down Xemnas in a final battle before ending up trapped in the Realm of Darkness. Here the two find a bottle containing a note washed up on the shore at the edge of the world. 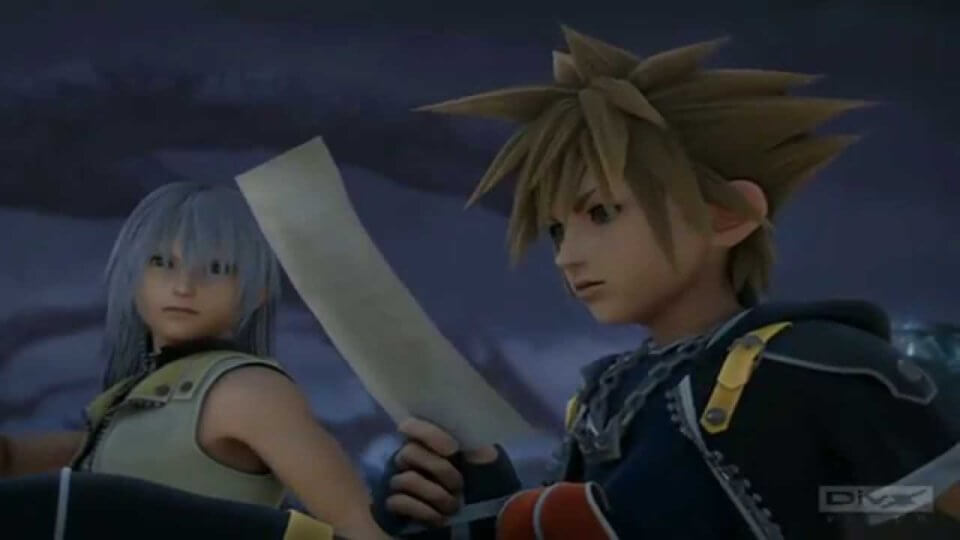 The note is a message from Kairi, and after reading it a magical door appears that transports Sora and Riku back to Destiny Islands from the first game where they are reunited with Kairi, Donald and Goofy.

Here Kairi hands Sora a further letter that will set in motion events in a further game. Zoom out and fade to black.

3 years after the release of Kingdom Hearts 2 a new entry in the series hit the Nintendo DS. This game, titled 358/2 Days was also set between the events of Kingdom Hearts 1 & 2 and aimed to provide further insight into The Organisation and the relationship between it’s members Roxas, Axel and a new-coming 14th member Xion. 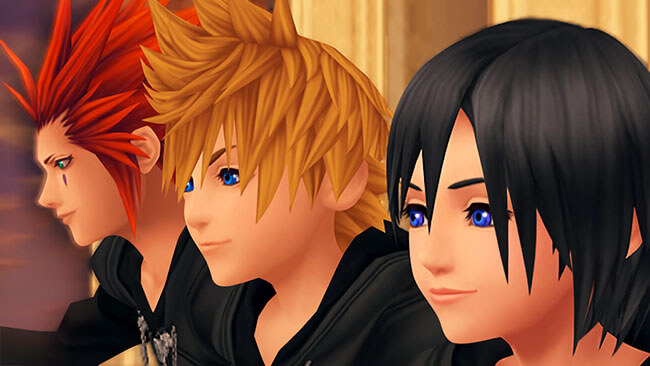 Throughout the events of the game it’s revealed that the Organisations’ true intent behind bringing Xion into their ranks is to use her as a puppet/husk that would become a replica of Sora. But to complete her quest she needs some of his memories. Memories which currently reside inside Roxas.

The core of the game involves playing as Roxas and travelling to various worlds carrying out missions for the Organisation, with the story progressing like days on a calendar, taking place in the year Sora is in his slumber in Castle Oblivion.

Roxas begins to realise his connection to Sora and pieces together that he is Sora’s Nobody. He knows that to revive Sora he needs to hand over the memories he possesses so that he can be complete. Although Xion now holds some of those memories, so Roxas can’t do it alone. Sora can’t be awoken until all his memories are returned in full. 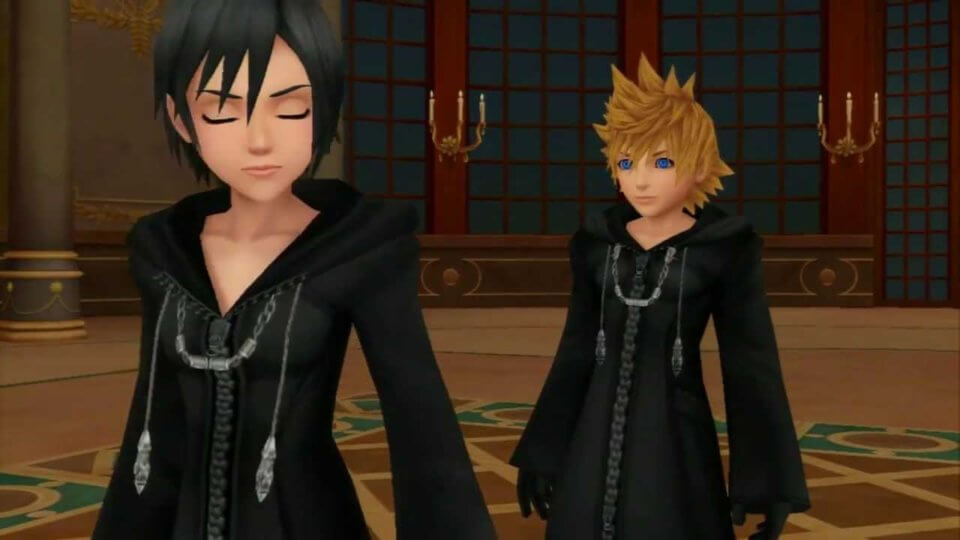 We get to experience the inner working of the Organisation and learn that individual members within have their own motives for doing things and have no problems backstabbing other members to further their own plans.

Upon being reprogrammed by Xemnas, Xion attempts to absorb Roxas and become whole, though this would mean the real Sora will never awaken. However, Roxas battles and defeats Xion, who reveals Xemnas’s motives and intentions to him before merging with him. Roxas inherits Xion’s Keyblade, and with her spirit inside him allows him to wield both keys at once. 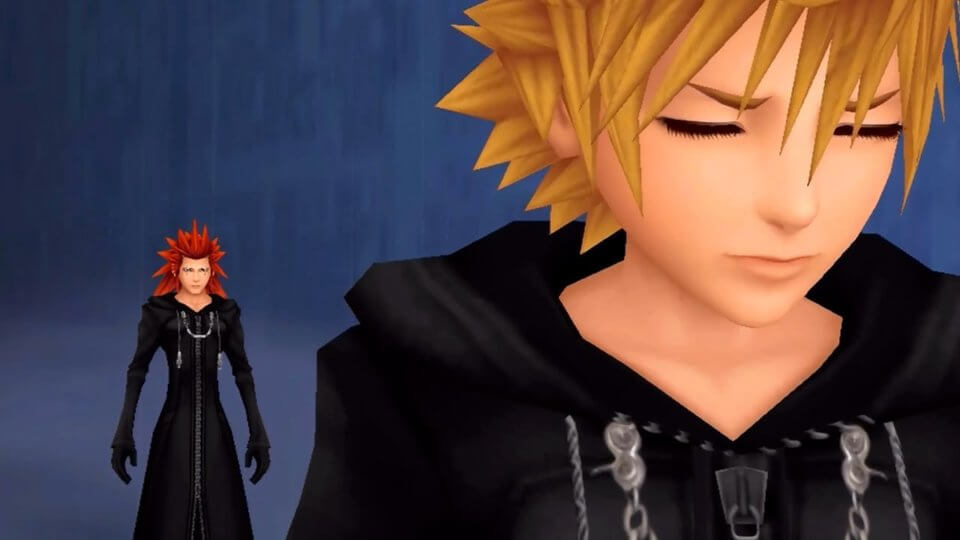 Angered by how he and Xion were used, Roxas heads off to face Xemnas but is stopped by Riku along the way who taps into his darkness to take the upper hand against Roxas and subdue him.
This is the battle that was taking place in the secret ending of Kingdom Hearts 1 all those years ago. 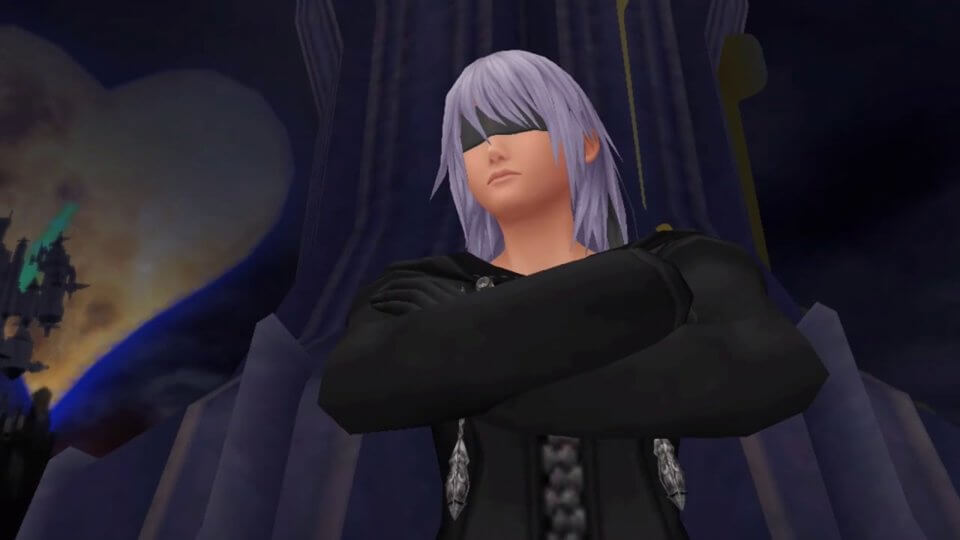 Riku delivers Roxas to Namine in Castle oblivion who is able to use the memories from Roxas to awaken Sora, this is the scene from KH2 where Roxas stands infront of the opening pod revealing Sora for the first time.

Check back next week where I’ll be covering Birth By Sleep and Dream Drop Distance, the games that cover the events of the past prior to Sora’s birth and link all the games released so far to the events that will transpire in Kingdom Hearts 3.