A New Spin Off In The Valkyria Universe

Valkyria Revolution is the newest game in the Valkyria series of games from Sega. Although this title is a spin-off story that is completely separate from the fan favourite Chronicles series. Making a a great jumping on point for newcomers to the series. Like Chronicles, it has a large cast of characters you’ll grow to love or hate by the end of the story. But where this title differs is in it’s completely new battle system, which is nothing like the strategic turn based system from Chronicles but a fast paced real-time action combat with a little bit of strategy involved. If you were a big fan of the turn based strategy of earlier Valkyria titles you may be a little disappointed here.

The games story is inspired by the European industrial revolution and focuses on a war of liberation between two nations Jutland & Ruzi Empire. The small independent kingdom of Jutland is suffocating from an economic blockade sanctioned by the tyrannical Ruzi Empire, and must resort to war in order to liberate itself and the surrounding lands from the Ruzi’s imperialist conquest.

I won’t be delving too much into the story as the game dives into some spoilery stuff right off the bat. But the games story is well crafted, consistently interesting and contains a large roster of characters you’ll grow attached to by the end of the game. I do wish that less grinding was required to be able to complete the story. I spent quite a bit of time playing through side missions to get powerful enough and to craft new weapons so that I could progress easier in the main story missions. These side missions aren’t nearly as well crafted as the main story missions and follow a very repetitive mission structure. But once you can progress further and learn more about the main story you forget about the grinding…until you need to do it again. 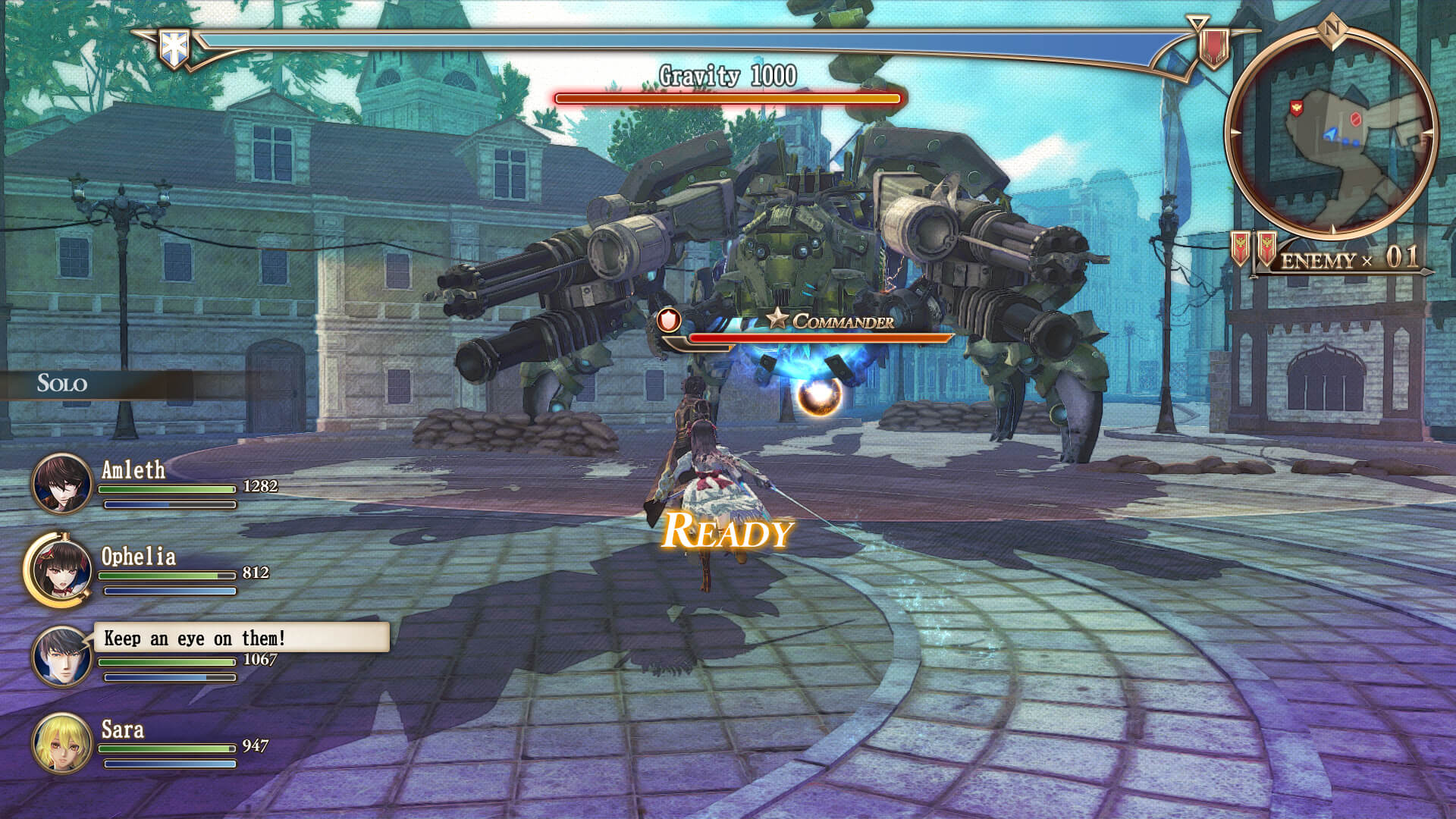 I knew going in that this game had a new battle system and that it wasn’t turn based anymore. Initially I wasn’t a big fan of the new combat, but the more I played it grew on me and I found myself getting much better at dealing with it’s limitations and working some more strategy into the fighting mix.

The combat is action based and you can free roam over the whole battlefield and walk right up to enemies if you wish. You cannot perform attack actions until your action gauge is full which at the start of a battle means some movement, dodge rolling and guarding are required (all of these partially fill up the attack gauge). Once the gauge displays ‘Ready’ you can attack, but once it depletes you will need to wait a few moments to attack some more.

There is a secondary gauge that appears along the top of the screen that progressively fills up as enemies are defeated. Once this large gauge fills you no longer need to wait for the ‘Ready’ you can just go on an attacking frenzy. At this point the game turns into a full on action combat game similar to Kingdom Hearts or Devil May Cry. I would have preferred at times not to have to wait or worry about the ‘Ready’ gauge as it became downright annoying at times but did force you to think about your battle strategy some more. So I understand what the developers were trying to achieve with it.

Some of the later boss battles are highly intense so some mastery over the combat systems and limitations are necessary. Getting through these fights will give you a massive sense of achievement when you finally manage to get it right though.

It isn’t all about melee attacking though. You also have guns, grenades and magic in your attack arsenal too. These are triggered by using a weapon wheel menu that when initiated slows down time which returns that tactical feel to the combat Chronicles fans will enjoy.
In Valkyria Revolution your collectible/spendable resource is known as Ragnite. It is a precious mineral that is highly sought after and powers the alchemy magic in this world. You obtain Ragnite by defeating enemies, completing certain missions and you are able to buy different types from stores (different types of Ragnite power different types of magic).

Some of the best fun comes when you get to spend your Ragnite to customise new weapons to use in battle and purchase new points on your weapon skill trees for you and your party for new weapon features and abilities. In the same way you can customise weapons, Ragnite can be used to make customised alchemic spells for your party also. Wanting to push for new unlocks and better gear are what will drive you through those side missions.

The game is powered by a new rendering engine called GOUACHE, it in no way pushes the limits of the PS4 but it looks stunning in its own way due to the painterly anime art style of the game. The whole game looks like it has been rendered as a canvas painting. It really pops in the cutscenes, especially when they are taking place on the large vista’s or sunset moments. But I was often pulled out of the experience by some poor character animations during the cutscenes and some lip sync that either triggered at the wrong times or where mouth’s didn’t move at all.

Some of the games cutcenes I felt did drag on a little too long and were followed by numerous loading screens. Especially when first starting the game. It felt like it was almost half an hour after starting the game that I was able to get in and move my character. But these lengthy scenes do a good job of setting up the world, the lore and developing the characters.

All said, I enjoyed my time with Valkyria Revolution and enjoyed it’s well crafted story. While it does have some issues with iffy animations and its necessity on grinding it’s not too dissimilar from other JRPG titles. If you go into the game thinking you are getting another Chronicles game you will be disappointed. But If you are looking for a decent RPG with a semi strategic battle system and interesting characters this might be right up your alley.
The game also retails for less than a regular game costs, taking that into account and the amount of gameplay value you will get from the title I recommend any JRPG fans pick it up and try it.

Valkyria Revolution is available on the 30th of June on PS4 and Xbox One.

A PS4 review copy was provided by the publisher for the purpose of this review.