The Forgotten City, despite being the recently released debut game of local Australian developers Modern Storyteller, is actually a game you may have heard of, or perhaps even played in the past. The initial concept was created as a Skyrim mod of the same name that managed to surpass millions of downloads before Modern Storyteller founder Nick Pearce decided to expand on the concepts of the mod and develop it into a stand alone title.

The game begins with a cold opening, you’ve just woken up on the bank of a river with no memories, being helped by a hooded woman named Karen who brings you to consciousness and requests that you enter a nearby temple to search for Al, another adventurer who had entered the temple some hours before but hasn’t returned. Strange start, I’ll give it that, but things are about to get a lot weirder. As you enter the temple, you soon discover the body of Al covered in gold, hanging from a tree with an accompanying suicide note indicating he’s been here a lot more than ‘a few hours’. Before long you’ll find yourself falling through the crumbling floor of the temple, being whisked 2000 years into the past and in the middle of an ancient political mystery.

I’m a sucker for time travel stories, but more so, I love time loop stories and when I found out that The Forgotten City revolves around both I knew it would be right up my alley. Bioshock Infinite, Edge of Tomorrow, Steins;Gate and Erased are just a few of my favourite pieces of media because of how well they incorporate the concept of time loops in interesting ways. The Forgotten City is no different here as in this world the thing that ‘resets’ the day isn’t dying, falling asleep or a time machine. It’s something anyone is capable of. Sinning. 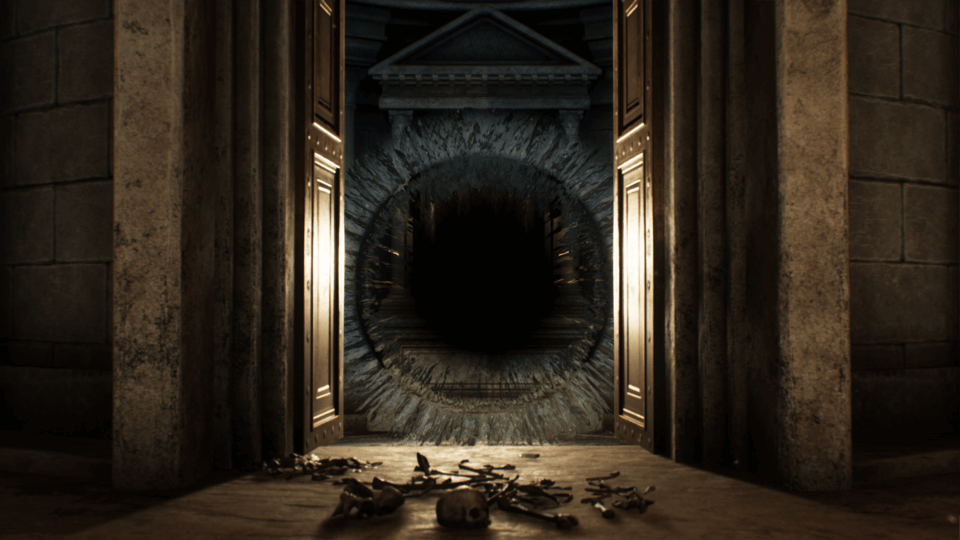 The ancient city you find yourself in is governed by one law, known as The Golden Rule. If anyone in the city sins, the skies rumble, an ominous deity cries out and bow wielding humanoids appear to turn every person in the town into solid gold. This causes all 20-30 residents of the city to be on their best behaviour at all times, in the fear that one sin on their behalf will kill everyone in the city. No stealing, no murder, no adultery, no conspiring, everyone lives trying to be their best selves, while also keeping a very close eye on everyone else for any potential sinning to nip it in the bud fast before their actions potentially end everyone else.

I thought this concept was interesting and unique as it’s only the player character that is able to ‘relive the day’ when a sin occurs by quickly being able to enter a portal within the temple where you first emerged into the ancient city. 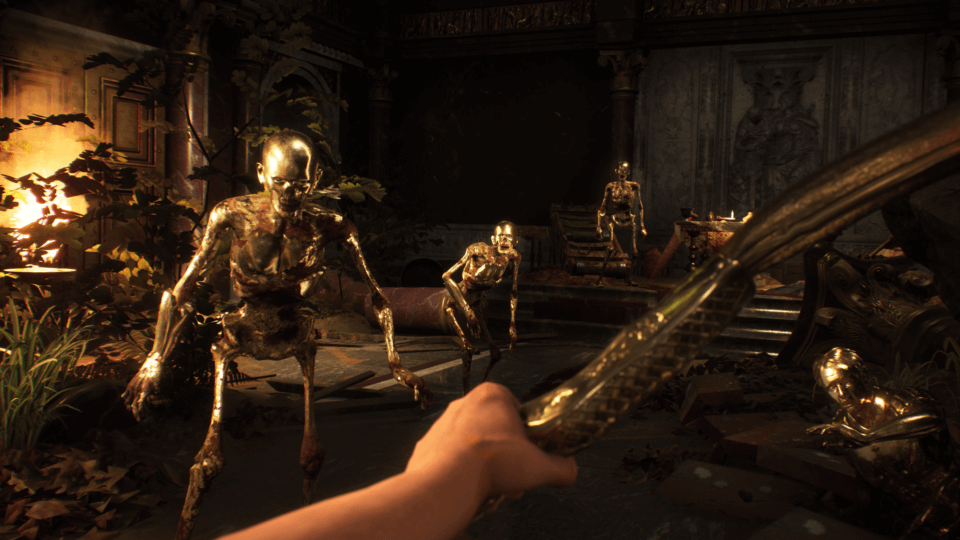 Hands down, the best thing about The Forgotten City is it’s incredible writing, and the way that each small interaction, character arc and side mission is able to play it’s own part within the overall mystery that leads to the game’s true ending. The game doesn’t overstay it’s welcome either as I achieved it’s true ending in around 10 hours, and it was a constantly engaging experience the whole way through. Keeping things fresh and interesting by introducing new plot threads and environments to explore at just the right time. What initially seems to be a small town is hiding so much more, if you’re willing to uncover it all.

The vessel for the fantastic writing and exposition is obviously the characters within the story. And despite the game only clocking in at around 10 hours, it’s incredible how deep each individual character felt and how attached I found myself getting to some of them, once again, if you take the time to find them and hear them out. The town contains around 20 inhabitants that each have their own piece to play in uncovering the overall mystery. At it’s core, The Forgotten City felt like a puzzle game to me. Not in the sense of trying to solve complex platforming levels or intellectual head scratchers like you’d find in The Witness for example. More in the sense that the conversations held with the townspeople would result in leads that would lead to answers for problems you either needed to solve, or would soon need to solve. It’s then up to you to work out how to use that information to lead you to the game’s true end. Your open leads and quests are easily tracked in the game’s menu which I found incredibly helpful as just about every first conversation with a person would open up something to investigate or problem to solve and it was great to have a checklist of items I could refer to. 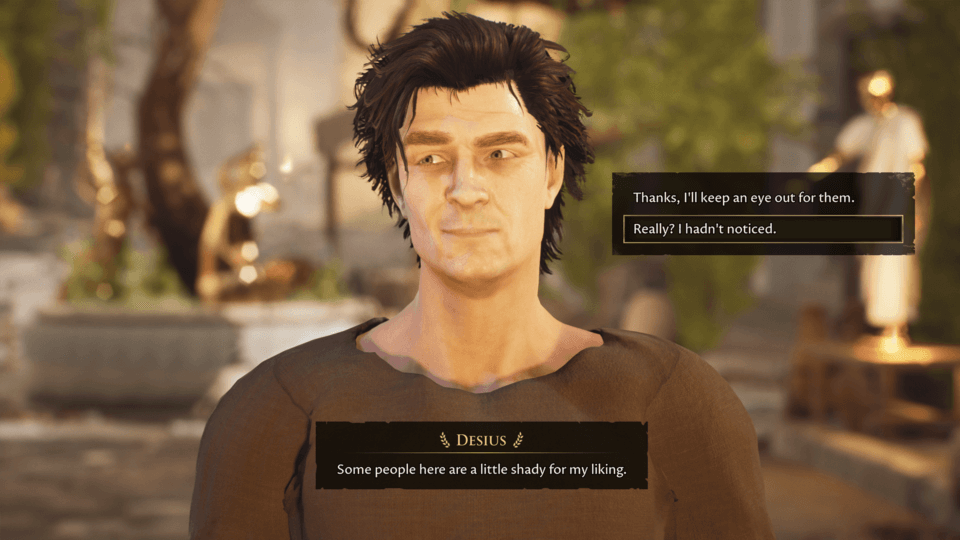 The Forgotten City as mentioned, has multiple endings. 4 in total. The first of which is able to be achieved within minutes of being sent back in time if you’ve chosen a particular starting profession and know who to go after. While this will lead to the game’s credits, you’ll be missing 99% of the game. 3 out of the 4 endings are considered the non-canon endings, with the true ending being the one you should be chasing.

I had achieved ending 3 before jumping back in to finish the requirements for the true ending and was shocked to learn that by not going after the canon ending, approximately half of the game could be missed. There are entire characters, character arcs and areas of the city that will remain unknown to you if you chose to be satisfied with any of the 3 other endings and put the game away. The effort put in to obtain the true ending was not only a worthwhile experience, as the quests leading up to it and the ultimate confrontation that takes place are some of the best missions and dialogue the game has to offer. It also gives you a lot more time to develop relationships with the core cast which results in a touching sequence in the final moments of the true ending.

While I thoroughly enjoyed my time with The Forgotten City, and will certainly be playing through it again in the near future to gather up the last remaining trophies I am yet to obtain, I did come across a few bugs during my time such as the audio dropping out during some dialogue lines, and even a quest that managed to complete itself that was completely unrelated to the part of the city and current objective I was doing with no explanation as to what happened, thankfully on a subsequent loop I was able to still uncover the answers of that ‘solved’ quest but it was still marked off as completed in my quest log and had to go searching for the answers it would have presented.

The loading times of the game are also something that did take me out of the experience a little. Thankfully they aren’t frequent unless you’re changing between some of the key zones of the city but any time I unfortunately died from a fall, had to reload a save or entering a different part of the city the game would seemingly freeze, often upwards of 30 seconds before I was able to resume control of the character. While it’s not the game having to load in new area assets that was my issue, it was more about how the loading is presented to the player. The game seemingly freezes and becomes unresponsive for the time that it’s loading where I probably would have preferred a separate loading screen with perhaps some artwork or player tips similar to something that would be seen in Skyrim when traversing between key areas. 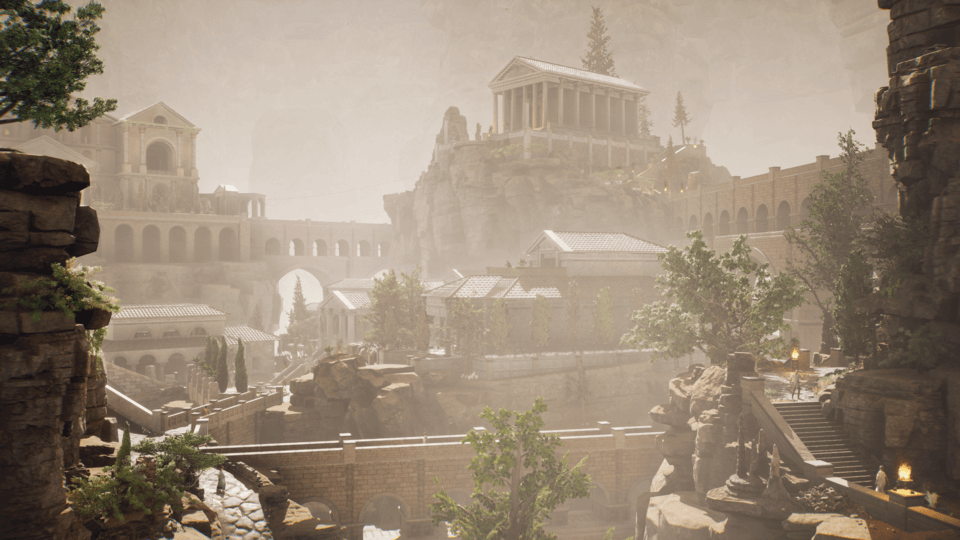 The Forgotten City is a narrative masterpiece. It had me engaged in the world and it’s characters right from the get go and maintained it throughout the whole game. It’s incredible that Modern Storyteller were able to create the game with a core team of 4 people. If this is the quality of a debut game, I’m extremely excited to see what the team at Modern Storyteller come out with next.