2018 seems like it could be ‘year of the remake’ even more so than 2017. Starting off strong with Shadow of the Colossus and now we have gotten a brand new remake of one of the 90’s most loved JRPG games, Secret of Mana.

Originally released back in 1993 on the Super Nintendo Secret of Mana is a high fantasy JRPG that in it’s many years post release has gathered a massive fan-base, assisting in the Mana series now being highly renowned and classified as one of the best JRPG series ever. 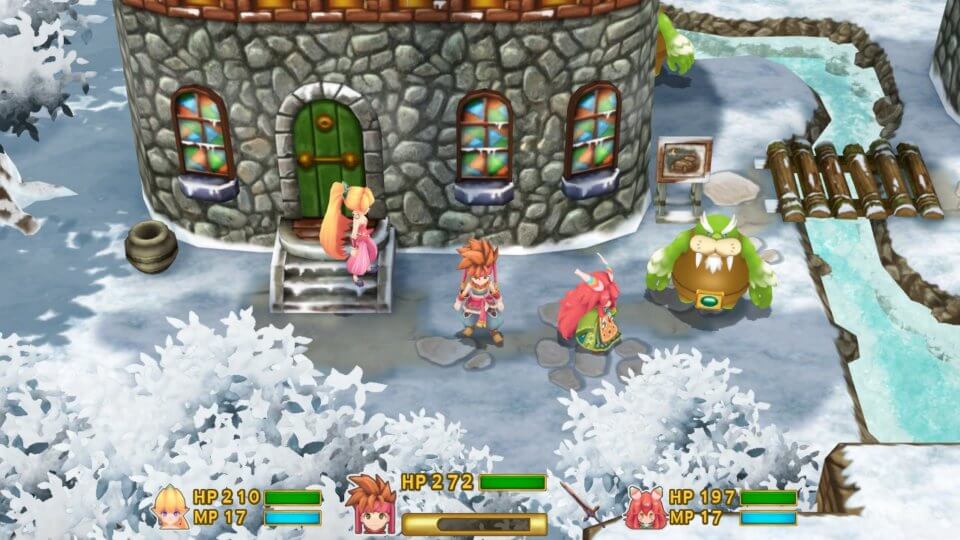 A Heartwarming Tale of Friendship

It tells the story of Randi (the main protagonist, who in this remake you can name whatever you prefer) a young boy who takes a stumble down a waterfall while looking for treasure and uncovers an old rusty sword lodged in a large stone. Randi is able to pull the sword free, but in doing so unleashes a horde of monsters that begin terrorising his and surrounding villages. Being shunned by his village for doing so they exile Randi and thus begins the main quest of Secret of Mana.

Shortly into the story Randi learns that the sword he posses is an ancient weapon known as the Mana Sword that needs to be re-energised by visiting the 8 Mana Temples scattered across the lands. This sets in motion the core quest for the game and you set upon your journey with companions Primm, and Popoi (who you can also change the name’s of if you wish) to reactive the Mana Sword and stop the sinister empire. 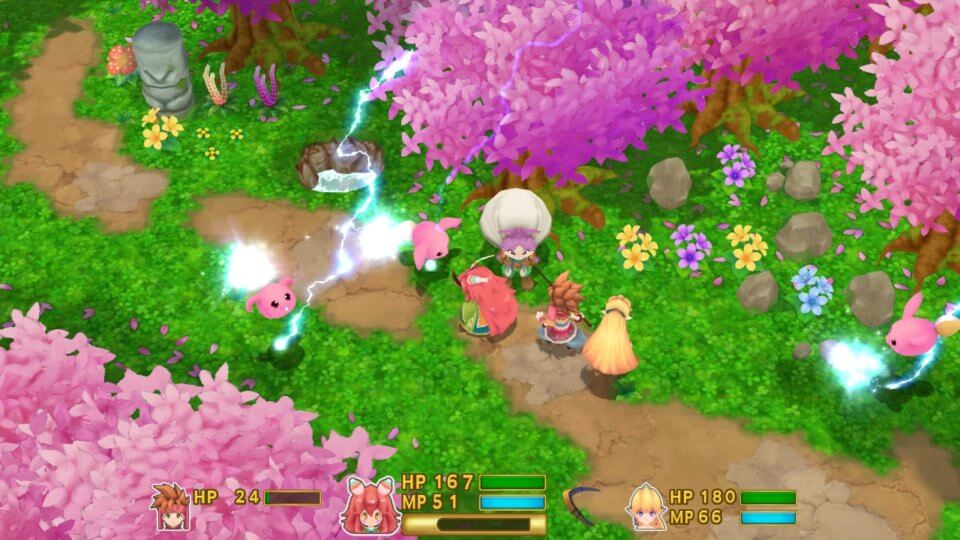 This new 2018 remake features a brand new art style and is likely it’s biggest change between it and the classic. Doing away with the classic 16-bit pixel art style, we now have a full 3D remake with a vibrant anime-esque art style, not too dissimilar to the art style of the Final Fantasy 4 remake that released around 10 years ago, just with a higher resolution. This helps bring the series to a brand new audience that may find going back to the classic too difficult or missed the original release all together.

The environments in the remake are bursting with life and colour. I played the PS Vita version for review and it’s OLED screen had the visual’s popping off the screen. Walking through the forests you’ll notice (or maybe not depending on how observent you are) that the area’s are full of life with streams and waterfalls rippling across the map and tree’s that gently move in the wind. Adding that extra breath of life and sweet charm to the environments. 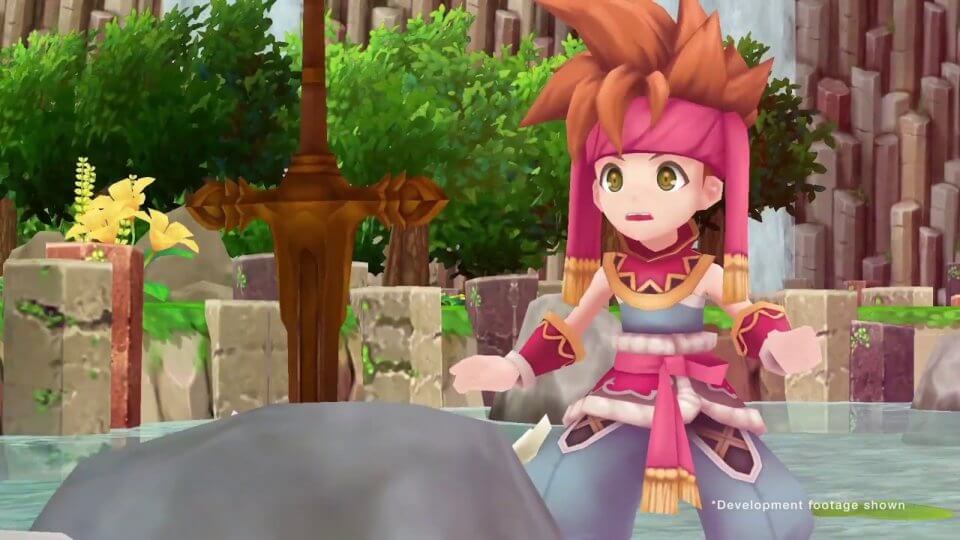 While the visuals have been given new life the combat system and and character AI have not. It’s likely this was a design choice by the team working on the remake to have it still ‘feel like’ the original but has left the controls during combat feeling frustrating and dated at times with the movement allowing full 360 degree motion but attacking strikes constantly trying to stick to an octo-directional area. Forcing me to often back out and then re-engage combat with an enemy from a different angle to better guarantee landing a hit.

Should Be Seen And Not Heard At Times

Also introduced in the remake is voice acting. Both the main characters and NPC’s are voiced during main conversations and quests, although not every character you can speak with in the game has a voice. There is a large quality gap between some of the voices in the English version, with some voices not fitting the character at all or having some lines that are delivered so poorly it becomes awkward to listen to. Having no lip sync with the character models definitely doesn’t help with the overall experience. Thankfully if you find the performances breaking your experience too much they have included the option to switch over to the Japanese language track also. 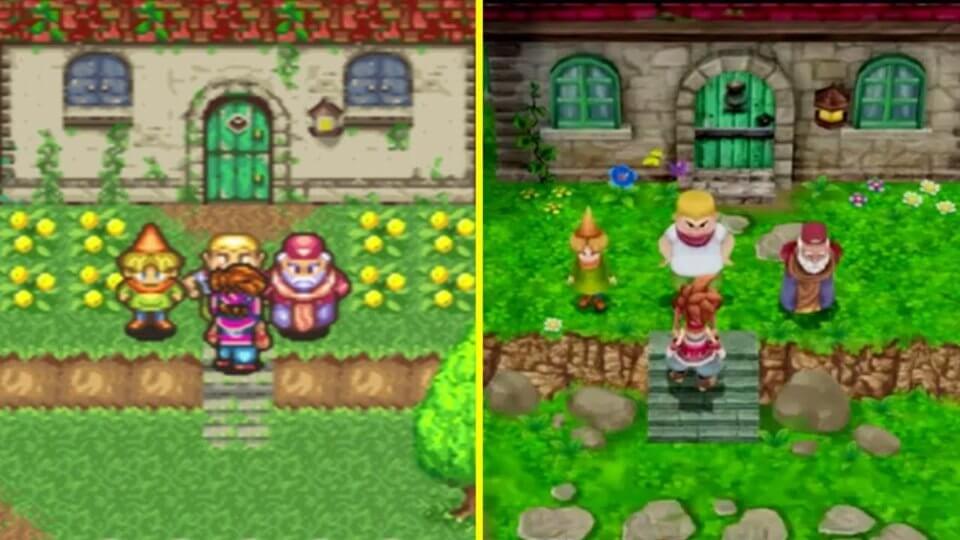 Secret of Mana contains one of the greatest musical scores of all time, and it is retained here and has even received a little face lift of it’s own. The musical pieces have been re-composed and I found them as powerful as their original counterparts. You also have the option to switch over to the classic soundtrack if the re-composed versions are not to your liking or you want a more nostalgic experience.

If you like to game with friends you’re in luck. Secret of Mana retains it’s multiplayer co-op allowing another friend to jump in assist in taking down monsters together. Just know it is local co-op only and with the PS Vita version each player does need to own their own copy of the game and join in the main players game ad-hoc.

Overall the Secret of Mana remake is a faithful recreation of a highly beloved classic, that Square Enix has modernised visually to get it in the hands of as many new generation gamers that may have missed the original 1993 release. While the visuals feel on par with other anime-esque rpg’s of recent years there are still some systems and character AI that feel dated by today’s standards. With the incredibly heartwarming narrative and amazing background score intact this is a great re-release that people new to the Mana series will have a great 20-25 hour experience with. 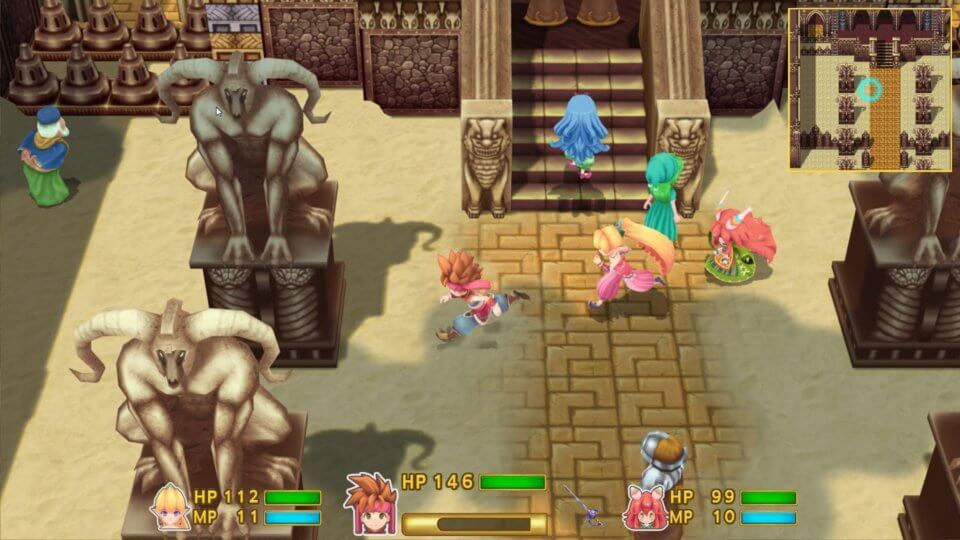 With this review I’ve tried to focus on and review this release, reviewing it for what it is rather than what it isn’t and not comparing it to the original every step of the way. If you are an existing fan of the series or a retro-enthusiast that prefers the 16-bit pixel art style you may not classify this as the definitive Secret of Mana experience but shouldn’t disregard this release before trying it.

A PS Vita review code was provided by Square Enix Australia for the purpose of this review.