In this day and age, when you say the words horror manga, only one name springs to mind. And that is the very talented and twisted Junji Ito. For over 30 years, Ito has created dark and grotesque stories that have a habit of sticking with you long after you’ve read them. Many of his stories manage to do this because his style of horror falls within the body horror genre and although they feature some supernatural elements, the outcomes and settings for his stories seem realistic and border on what could really happen in real life. And now, you’re able to get a taste of Ito’s storytelling style in anime format, with 24 of his short stories now being animated and coming together to form The Junji Ito Collection. While it’s certainly not the best way to view Ito’s work, it is a mostly entertaining experience and lets you see into the mind of the brilliant Junji Ito. 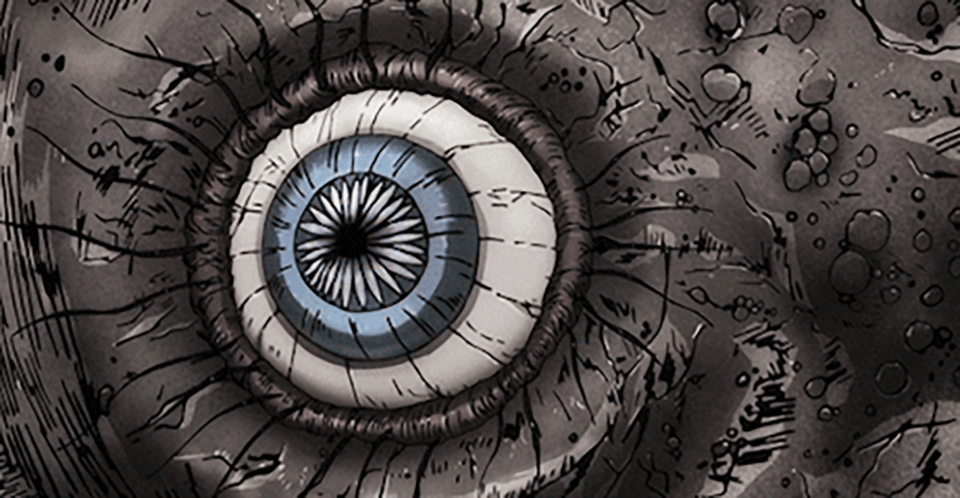 The Junji Ito Collection as the name suggests is a collection of his works but presented in anime format. At 12 episodes long, it’s not a complete collection of his published stories, consisting of only 24 that have been picked and animated. Each episode contains 2 stories with varying runtimes. Some episodes contain a fairly equal split between the two segments while others consist of a story that takes up 15-18 minutes leaving the remaining few minutes to focus on one of Ito’s very short works.

I liked the selection of stories included in the collection bar a couple. It was a good way to witness some of his lesser known, shorter stories that people may not be as familiar with, as here in the west, he’s primarily known for his 3 key titles, Uzumaki, Gyo and Tomie, none of which have been adapted into the 12 episodes, but more on Tomie later.

Some key standouts being Painter, Fashion Model, Slug Girl and The Long Dream. Most of the stories included drive home the theme of body horror that Ito has become so iconic for but some of the stories, primarily those that include his recurring character Souichi feel a bit out of place in this collection due to them having quite comedic undertones underneath what would be a disturbing story. Starting the collection off with a Souichi episode was a terrible way to introduce people to the series and prepare them for what laid ahead in future episodes. For something that was hyped up as a fear inducing adaptation of Junji Ito’s stories, I can see why a number of people I know were incredibly turned off by the first episode. Thankfully, story-wise the series picks up from there, really kicking into gear come episode 2. 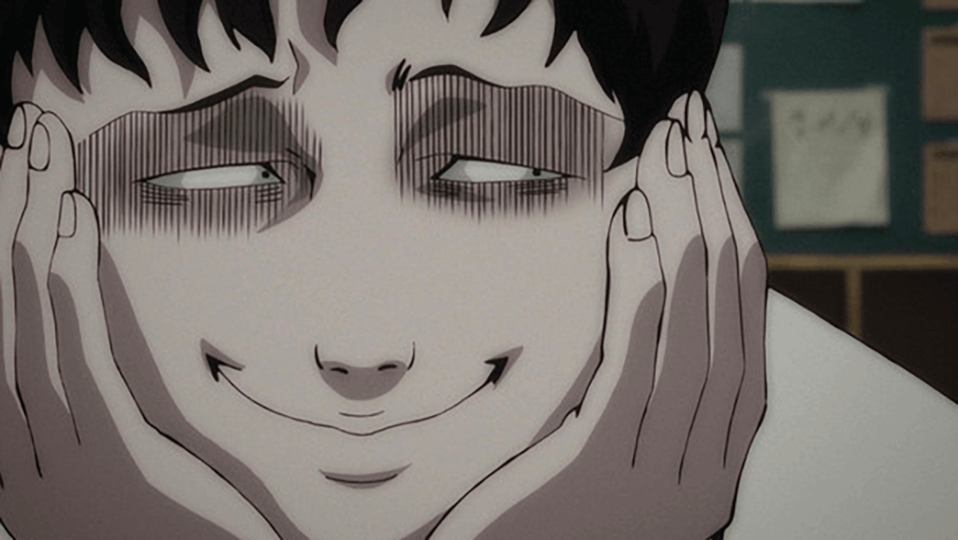 While the stories in the collection capture the plot of the source material really well, there was one key thing that didn’t make the transfer to the anime, and that was Ito’s signature, detailed artwork. Many of Ito’s panels are so packed full of detail and his iconic line-work that just by looking at them you can tell they would have taken hours to complete, so detailed at times that it takes a while for your brain to comprehend what you’re even looking at.

The anime has captured Ito’s base character designs well, which for his human characters has always been quite clean and generic but it fails to provide the same scares when the ‘reveals’ happen due to a lack of detail in the design department. Just take a look at the screenshot below for an example of what I mean. As mentioned, the stories themselves are still really disturbing and are faithful recreations of the manga stories they’re based on. With many of them consisting of dialogue right out off the pages of the manga and even replicating the shots and composition of the original drawings. 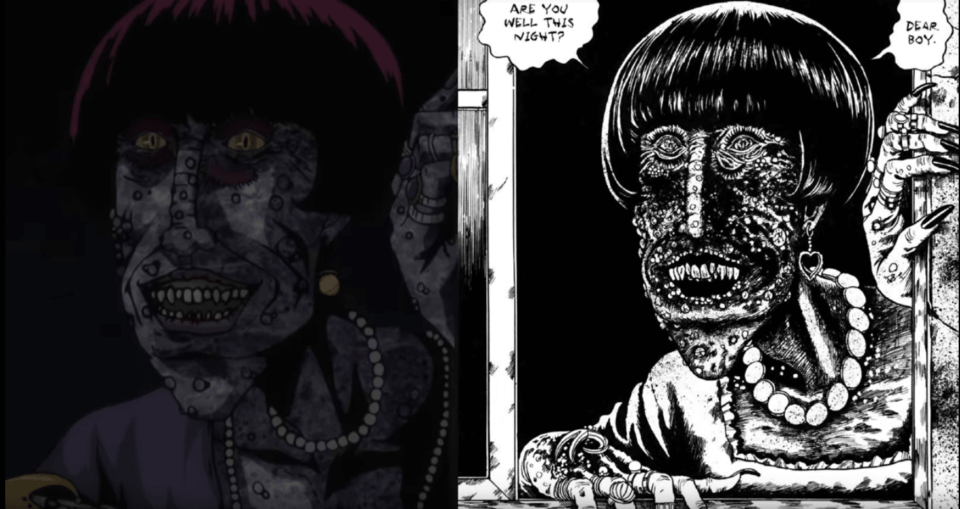 The home release Blu-Ray set includes all 12 episodes of the Junji Ito Collection across 2 discs that can be watched either dubbed in English or in Japanese with subtitles. It also includes a digital redemption code to watch the series using the FunimationNow app. The extras included in the set may be a big driving force in many wanting to pick it up. It includes the 2 part OVA for one of Ito’s most loved stories, Tomie. With the base run of episodes not adapting any of Ito’s 3 key works in full, many fans of his work will likely love the OVA’s included here so that they can witness the story of Tomie in animated form. 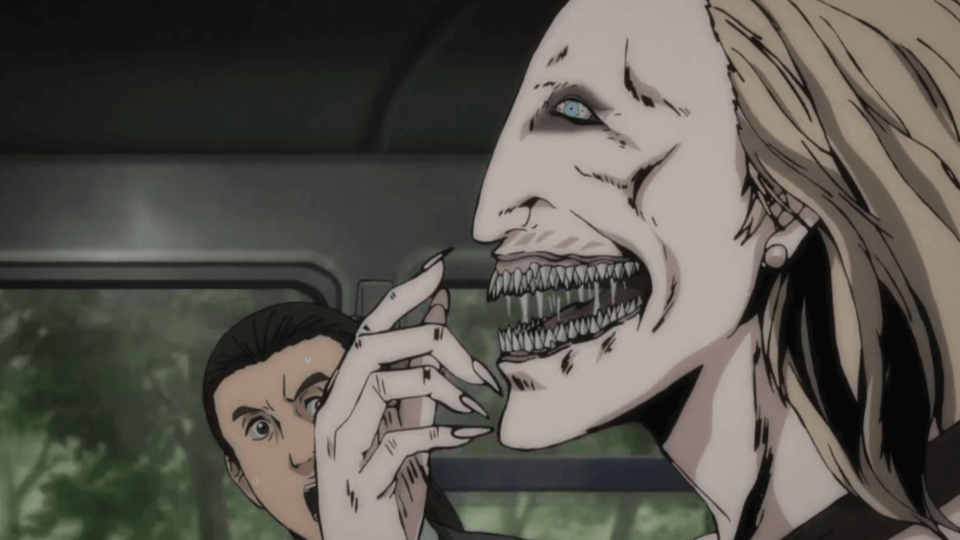 While not a perfect adaptation of Junji Ito’s work, The Junji Ito collection does capture the disturbing nature of the manga source material. While I would have loved if the series had better adapted Ito’s unique art style during it’s scary reveals and had less moments of noticeably lazy animation, the collection is still enjoyable and will present you with some twisted yet entertaining stories that can be enjoyed even if this is your first foray into the mind of Junji Ito.