In the world of video games, there are very few titles in the grand scheme of things that continue to be talked about and regarded as iconic games years or even decades after their original launch. Final Fantasy 7 though is undoubtedly one title that fits the bill of ‘iconic’ games perfectly. Maintaining a very strong and passionate fanbase that still adore the game even 23 years on from its original release.

Now one of the most loved games of all time has been brought into the modern age with Final Fantasy 7 Remake. It allows new fans to experience it’s incredible story and characters while providing many new insights, Easter eggs and twists for existing fans too. But this is far more than just a straight up remake. This game takes an already deep and wonderful world and expands on it in ways I wasn’t expecting before jumping in. 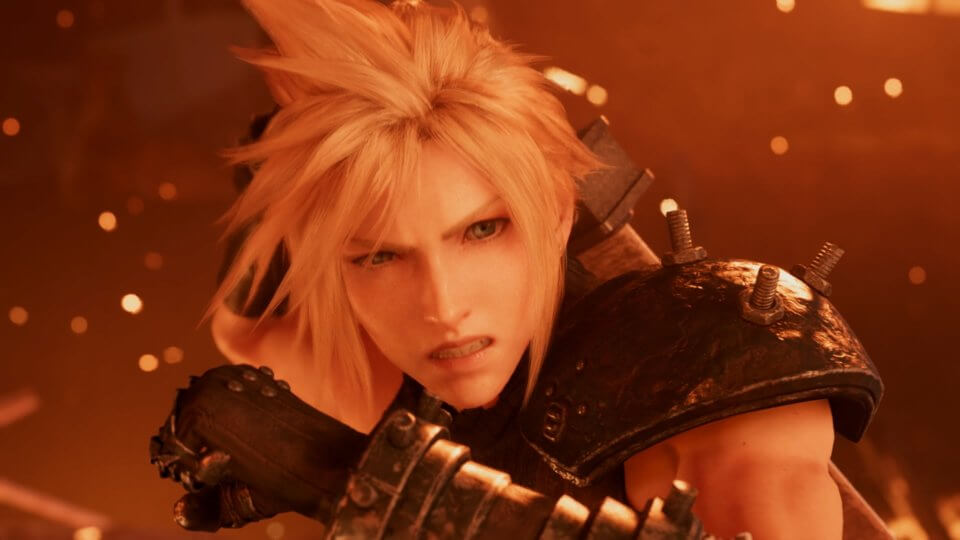 To say that a remake of Final Fantasy 7 was a long time coming would be a massive understatement. Fans have been loud for years requesting it, and even after being officially announced as being in development, it was still another 5 years until it finally landed in our hands.

Although the title is called Final Fantasy 7 Remake, it doesn’t contain a full recreation of the original game. In fact it doesn’t even come close to covering the whole original story. This should be seen as ‘part 1’ of the complete Remake project. This game focuses just on the portion of the story set in Midgar. Those familiar with the core story will know that in the original Final Fantasy 7, that portion of the game took about 6 hours to complete, at which point Cloud and the main crew got to journey out into the much more open environments of the game. Here in Remake, this portion of the story has been massively expanded upon and filled in with a ton of new character development, missions and areas to explore. Taking around 35 hours to complete, but it does so without feeling overly padded or bloated. Even if you’ve played the original game numerous times, there is still so much new content here to witness and fresh twists you won’t see coming.

And although the this Remake was released to appease existing fans and bring a much loved experience into the modern era, it remains very welcoming to newcomers of the franchise and you certainly don’t have to have had any previous history with Final Fantasy 7 to follow and thoroughly enjoy it’s story. 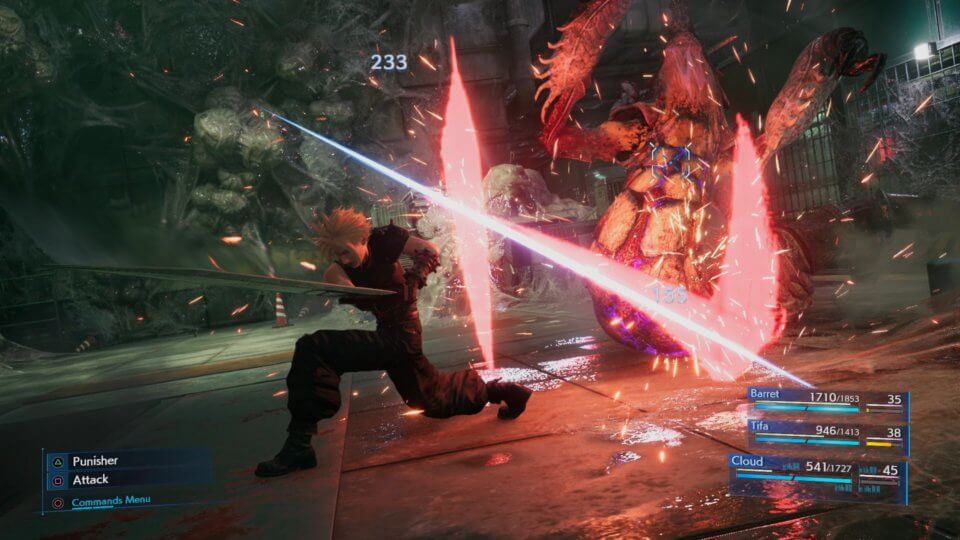 This isn’t just the original story with a fresh coat of paint. Final Fantasy 7 Remake is a truly modern evolution of a 23 year old tale and proves that the original story was well ahead of its time, with its themes and plot now more engaging and relatable than ever. They’ve taken a story and setting that was already great and expanded on it in just the right ways to make it fantastic. It fills in many of the blanks and perspectives that were just assumed in the original and also puts key focus on a number of side characters that got barely any development or time to shine in the original game.

One big change up compared to the original game is the complete overhaul of the combat system. Gone is the traditional turn-based combat, instead it’s been replaced by a faster paced, but still strategic real time action system that is closer to something you’ll find in FFXV or Kingdom Hearts.

The new action based combat provides a fresh spin on combat encounters keeping things fast paced but still giving you the ability to be methodical in your approach, come up with a strategy using the Active Time Battle gauge and switch out characters at any time to gain the advantage or turn the tide of battle in your favour. It also grants the ability to assign commands to the computer controlled allies so that you can still control them to some degree while manually taking full control of your player character on the battlefield.

I really loved this evolution of the battle systems that merged the fast paced, hack and slash combat of the Kingdom Hearts series with the strategic nature of classic turn based Final Fantasy games. It was one thing I was worried about heading into the remake but after playing it, I have to say they totally nailed it. Not only does it work, it also feels great to play and pushes how combat can work in the franchise going forward.

Final Fantasy 7 Remake doesn’t quite meet the requirements to be classed as an ‘open world’ game but does utilise a very open plan design for its areas, leaving plenty to explore and find. The narrative follows a linear story path but is told within large explorable areas that occasionally give you additional time to explore and complete side objectives before jumping back onto the main path. The closest thing I could compare it to when it comes to game design would be Naughty Dogs’ Uncharted 4 which also featured a linear story path but occasionally had open chapters during which the player was given the chance to complete side objectives before moving on and continuing through the following chapters.

The one small gripe i had with Final Fantasy 7 Remake was actually with how the structure of these side mission segments actually slowed down the flow and progression of the story. At numerous times throughout the game’s chapters you will be presented with the choice to take a step back from progressing the main quest line to partake in a number of side objectives. You’ll know when these are because the game does warn you upon heading to the objective point for the main quest that progressing on will lock you out of completing the batch of side quests for that portion of the game. Because I naturally have a fear of missing out, and these side missions potentially containing some great character moments or rewards, I forced myself to put the main story on hold in favour of completing the side missions, just to see what they featured. And while quite a number of them rewarded me for my efforts, they did slow down the overall pacing of the game’s narrative progression and I wish there was a way to still complete these quests somehow without them being forced into only being available in very specific chapters of the game.

Final Fantasy 7 Remake utilises current day graphics and visual techniques to breathe life into Midgar more than ever before. Not only does the game look stunning, but it also makes Midgar feel like a real, lived in place. Packed with so much more detail than present in the original game. This leap in visual fidelity allows you to immerse yourself in the world even more and see things, such as the first hand consequences of your actions after the opening reactor explosion mission for example. It shows Midgar as a more grounded, living and breathing environment filled with both beautiful things to look at as well as the harsh reality of poverty, further reflecting the same juxtaposition the writers were trying to convey back when they designed the original Midgar for the 1997 release, showcasing its raised areas, where the cities rich and elite reside alongside the lifestyle experienced by those living on the ground.

Now it wouldn’t really be a great Final Fantasy game without a layer of deep player customisation would it? Final Fantasy 7 Remake’s Materia system provides a further level of customisation when it comes to approaching combat encounters. As long as you posses the Materia, you can equip them onto your party characters’ Materia slots to allow them to perform special abilities or cast magical spells that can be used to take advantage of enemy weaknesses and provide personal buffs to your party’s combat stats.

The Materia system has a large influence in shaping your combat abilities and strategies. I often found when approaching a new enemy type or frequently during boss encounters that I had the wrong Materia equipped to effectively handle the situation. Thankfully in Final Fantasy 7 Remake, if you do fail at a combat encounter, the game allows you to understand where you may have gone wrong, re-assign your party’s Materia load-out and take another swing at the battle. Hopefully better equipped to succeed this time.

For those that love immense challenges in their JRPGs, Final Fantasy 7 Remake also features a hard mode which acts much like a new game+ that can be accessed after completing the game for the first time. This mode is not for the faint of heart as it comes running right out of the gate with additional challenges and restrictions around how you approach combat. Hard mode allows you to keep your leveled up characters and gear from the completed game and continue leveling them up on this playthrough. It does increase the strength of all enemies, with them all scaling to your level to provide a constant challenge, it prevents you from using items within combat and also stops MP from auto restoring when you rest at benches, meaning you really need to manage it well when in battle and cautiously decide which moves to use at what times. If you’re familiar with Final Fantasy, Kingdom Hearts, or numerous other Square Enix JRPGs, you’ll probably know how they like to sneak in really difficult secret bosses into the endgame of their titles. Final Fantasy 7 Remake is no different, with hard mode offering up a a super difficult secret boss for those tough enough to complete the list of requirements and objectives to face them in the first place. Hard mode 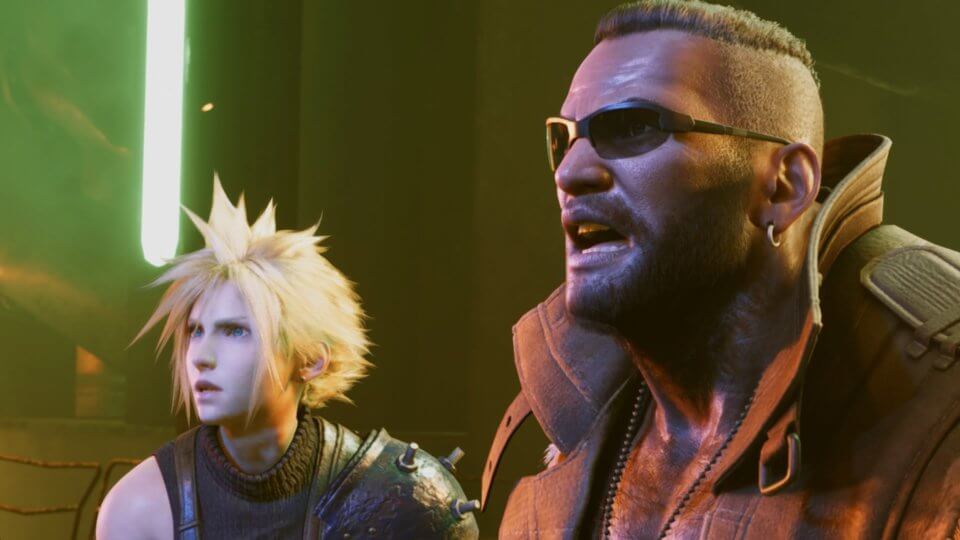 Final Fantasy 7 Remake has re-envisioned the classic game, delivering a much expanded upon but faithful adaptation of the Midgar portion of the Final Fantasy 7 story. Providing brand new twists and turns to the narrative and plenty of great character development. It’s likely still years away, but I truly can’t wait to see what Square Enix have in store for us in the next entry in this multi part remake of one of the greatest games of all time.