Darling in the FraXX is a 2018 anime series produced by CloverWorks and animated by both CloverWorks (Persona 5 the Animation) and Studio Trigger (Kill la Kill). Due to the following Studio Trigger have massed over the past few years, when the show was originally announced to be in production back in 2017 it got a lot of people excited to see how it would turn out, especially with them heading back into the world of mechs. This caused Darling in the FranXX to be one of the most talked about series of last year with the world and characters presented in the show resonating with many fans. While many people were vocal about the underwhelming ending to the series this review will focus on the first 12 episodes of the series from the home release set. 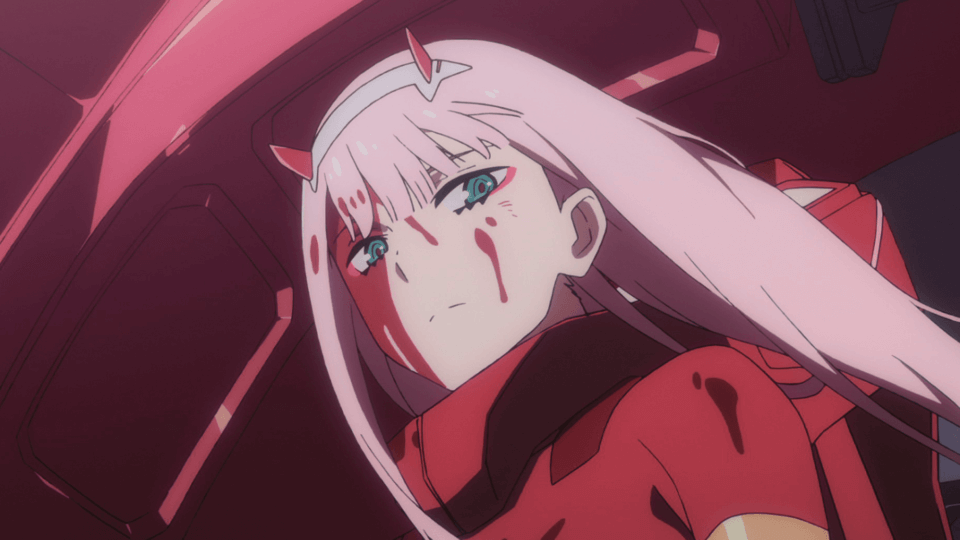 Darling in the FraXX takes place is a post-appocalyptic future where humanity have been driven into living inside mobile fortresses called Plantations after the emergence of giant creatures known as Klaxosaurs. Humanity no longer procreates and adults and children live in separate sections of the plantations. The children that do exist have been artificially created with the sole purpose of training to pilot mechanised battle suits known as FRANXX. The group of child pilots are referred to as Parasites, they are stripped of names and are referenced by adults via code numbers.

Operating a FRANXX requires two Parasites, a male and female pair dubbed the Stamen (male) and the Pistil (female). The two must be compatible and work together physically and emotionally to successfully pilot the FRANXX. But when lead character hero finds himself incompatible with his partner, resulting in him failing his graduation to become a true pilot. But right when he is on the verge of giving up, he meets a mysterious girl known only as Zero Two, a girl with horns and born with Klaxosaur blood who just happens to be looking for her perfect partner pilot, a person to be her ‘Darling’. The two form a mutually beneficial relationship, with Hiro seemingly being the only Stamen that can pilot with her without dying and Hiro wanting to prove to his friends that he can infact join them as a pilot. 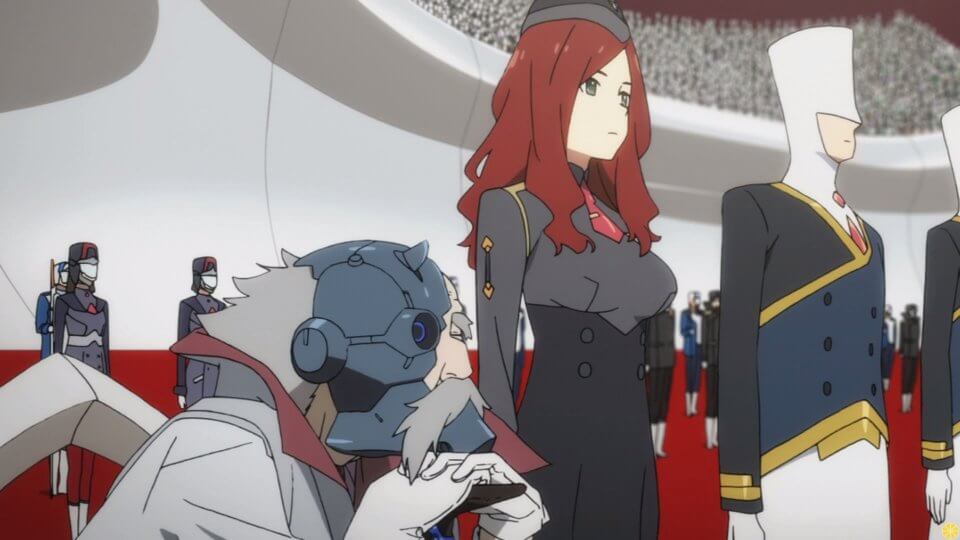 The first thing you’ll notice when jumping into the show is how good everything looks. The world is bright and vibrant despite being based on a wasteland, visually interesting, but the thing I liked above all else were the character designs. Each character has an individual and unique appearance, body shape and quirk or attribute to make them different from the others and this carries through past the main cast of children, the key adults in the show and even the enemies look like they’ve had a lot of work put into the their designs. The art direction definitely Trigger-esque possessing the same line style and mostly flat colours featured in a lot of their work. It’s a pleasing aesthetic and that looks great on screen. 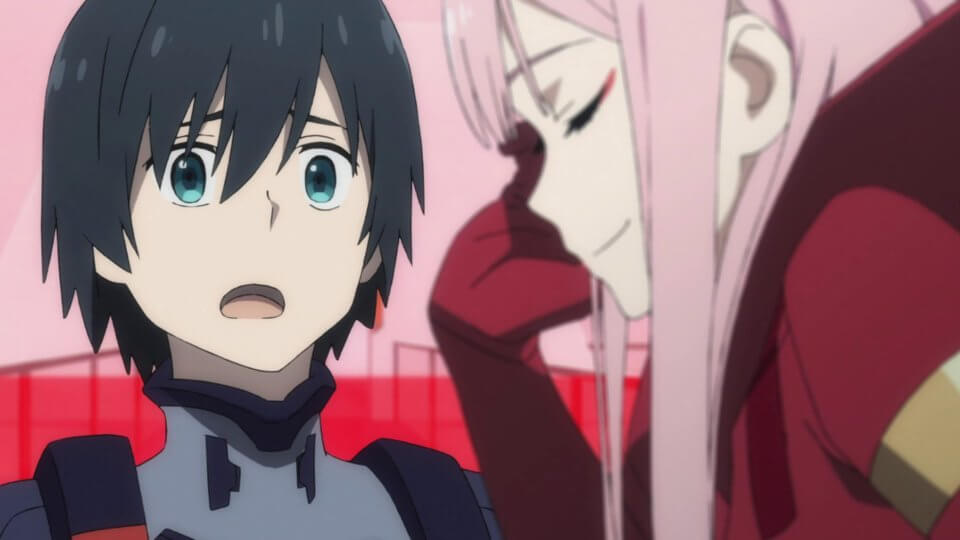 One thing Darling in the FranXX does really well is set up a world. It’s quite common in anime to introduce characters and develop them throughout the course of the series but with Darling in the FranXX the world they live in is one of the most interesting aspects of the show. While watching I was always wanting to know more about it and how it got to be in the state we see it. Continually trying to work out how did the Parasites come to be? How long how civilisation been like this? And where did the Klaxosaurs come from? And what do they want? Shows that make me think about things outside of just absorbing the main plot are the kinds of series that resonate with me long after I’ve finished watching. It primarily comes down to world building. Shows like Dragon Ball, Gurren Lagann or One Piece earn the followings and appreciation they do not only because of their core cast of characters, but because of the interesting worlds they inhabit. And Darling In The FranXX is well on its way to being a memorable series thanks to it’s really likeable cast of characters, environmental storytelling and a well developed world.

Because Darling in the FranXX takes the time to introduce the characters and concepts that make up it’s world it does start a little slow when it comes to the core story. This may be because the team wanted to give the viewer a chance to absorb everything being thrown at them or perhaps because they had 24 episodes to work with rather than 12 and decided they could take their time. While I didn’t mind the slow ride into things I can see how it could put some viewers off. But once the show finds it’s next gear it really gets going. So push past the first few episodes if you’re unsure and hopefully it becomes something yu’ll really enjoy. 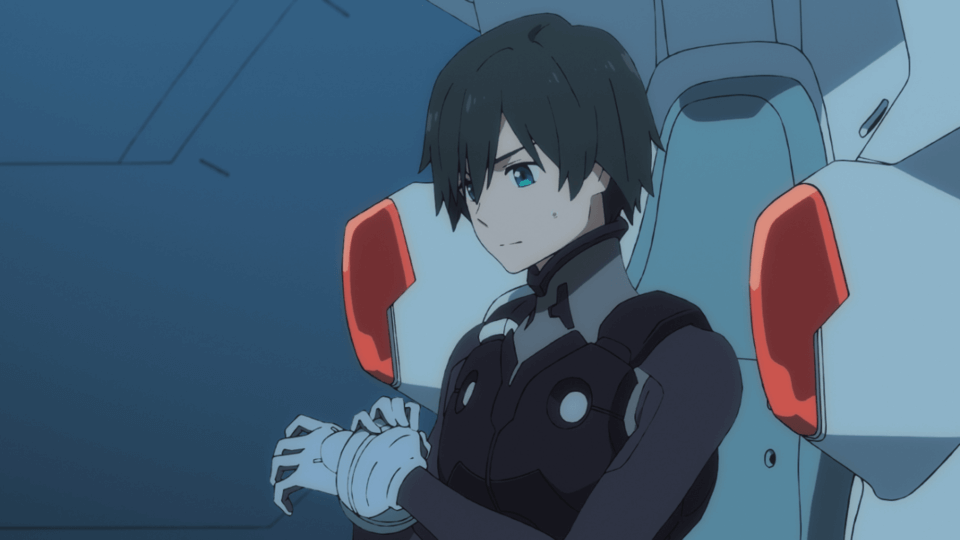 The English cast do a great job bringing the characters to life with the show containing many of the prominent voice actors working in the industry today. It’s clear a lot of care went into adapting the script and making sure the performances given were top notch. Voice director Clifford Chapin has done a great job directing the series and I have been told first hand that he went above and beyond to make sure the performances given were true to the characters and nothing but the best.

If you’d like to hear more behind the scenes info and how the show was handled by Clifford and Funimation you can check out my Talent Talk interview with Megan Shipman who plays Naomi in Darling in the FranXX below.

The home release set of Darling in the FranXX contains the first 12 episodes available to be watched in either Japanese with English subtitles or dubbed in English by Funimation. The set includes both the DVD and Blu-ray versions of the show in one package and even has a digital redemption code so that you can watch the episodes digitally on the Funimation Now app if you’re away from your TV.

The set also includes a number of additional extras including: Episode commentaries on Episodes 6 and 12, Pre-broadcast specials, Japanese web previews and the standard textless opening and closing themes.

While it may get off on a bit of a slow foot, it becomes clear why Darling in the FranXX was one of last years’ most popular anime series. It’s full of unique and lovable characters, the art direction is incredible and the world it takes place in is deep and interesting. If you love series like Evangelion, Code Geass or Gurren Lagann I highly recommend you check it out.