I jumped into Bungo Stray Dogs knowing very little about it beforehand. I know we’re told never to judge a book by its cover but after seeing it talked about in various online circles I frequent, liking the overall art direction I saw on the cover and knowing it was animated by studio Bones (Fullmetal Alchemist, My Hero Academia), I figured it would be worth checking out. And I’m glad I did go in knowing very little. By not knowing the twist that is revealed at the end of the first episode the show quickly grabbed me and thanks to some really steady pacing it didn’t let go for the 12 episode season. The show isn’t without some flaws but for the most part Bungo Stray Dogs delivers a really solid mystery solving battle anime. 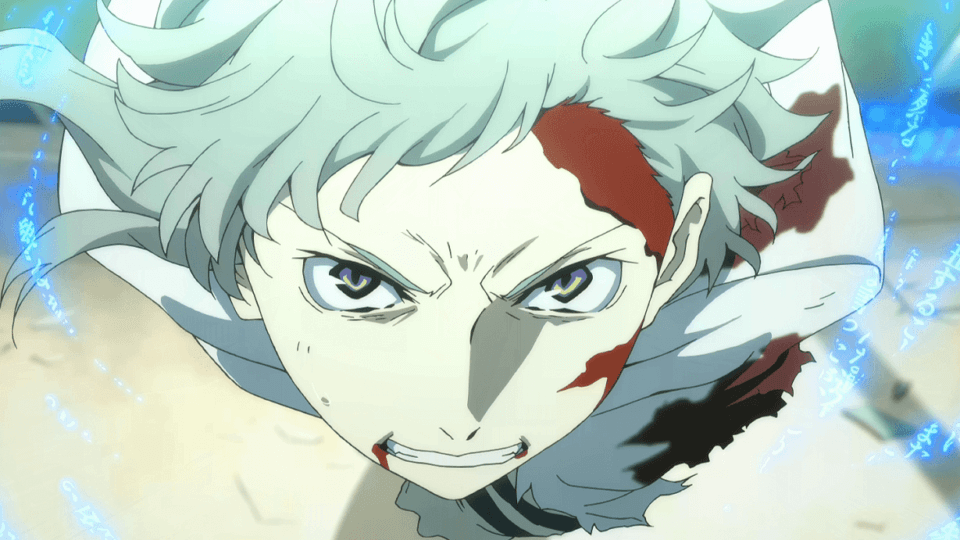 The story follows the life of Atsushi Nakajima, an orphan boy who finds himself recruited by a specialist mystery solving group known as the Armed Detective Agency. This group of people use their supernatural abilities to combat crime and solve mysteries within their city. Atsushi spends most of the season getting to learn the ways of the agency and in doing so gets to build his relationship with the many quirky and inhumanly gifted individuals that work for the agency.

After the initial twist which leads to Atsushi’s recruitment into the agency he quickly realises how out of his depth he is. I liked the story telling approach the writers of the series used throughout this season. It reminded me a lot of the early Harry Potter stories where at first you’re not sure if Harry really is the main protagonist of the story because he’s such an outsider and everyone seems to know more about everything than he does. That same style is reflected here with Atsushi. He’s an emotionally depressed boy thanks to his orphan upbringing and because the supernatural world, the characters of the agency and their respective special abilities are so new to him, we get to learn about the people and their world along with him providing a natural outlet for the show’s exposition. 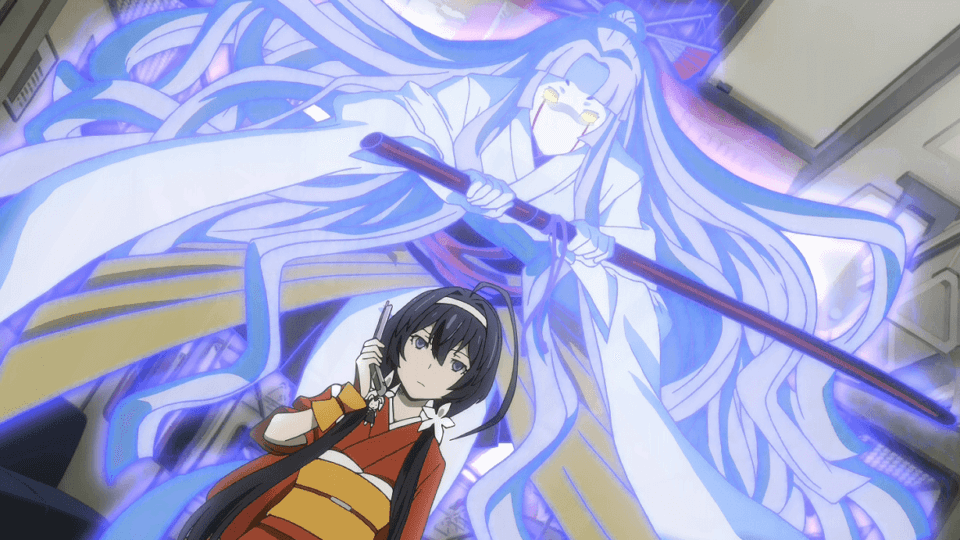 The twist at the end of the first episode did a great job at hooking me in and the rest of the season flowed with steady pacing. Wanting to find out more about the characters in the Armed Detective Agency, their respective powers and their backstories and motivations had me invested and wanting to continue the series to see how their unique perks would assist in solving the various cases the agency took on.

Studio Bones did a stellar job when it comes to the presentation of Bungo Stray Dogs. The character designs are great and were one of the first things that drew me to check out the series, the animation in the high-action combat sequences flowed nicely and the whole season featured crisp, detailed artwork all-round. There was still the odd case of characters noticeably loosing some detail, primarily in the faces when used in mid-long range shots but it wasn’t anywhere near bad enough to pull me out of enjoying the series overall.

As I mentioned in the opening of this review, while Bungo Stray Dogs is a really entertaining ride, it’s not without some issues. The biggest of which was how the show really didn’t want you forget that Atsushi had a tough upbringing as an orphan with everyone in his life continually beating him down emotionally. The same footage is used multiple times in the first episode alone to explain Atsushi’s Emos nature Andrew the same footage and dialogue is then used at some point in almost every episode of the season. It’s used in intense moments to show what Atsushi has overcome in his life but it gets old quick. I get it, he’s an orphan kid that’s had a tough life. 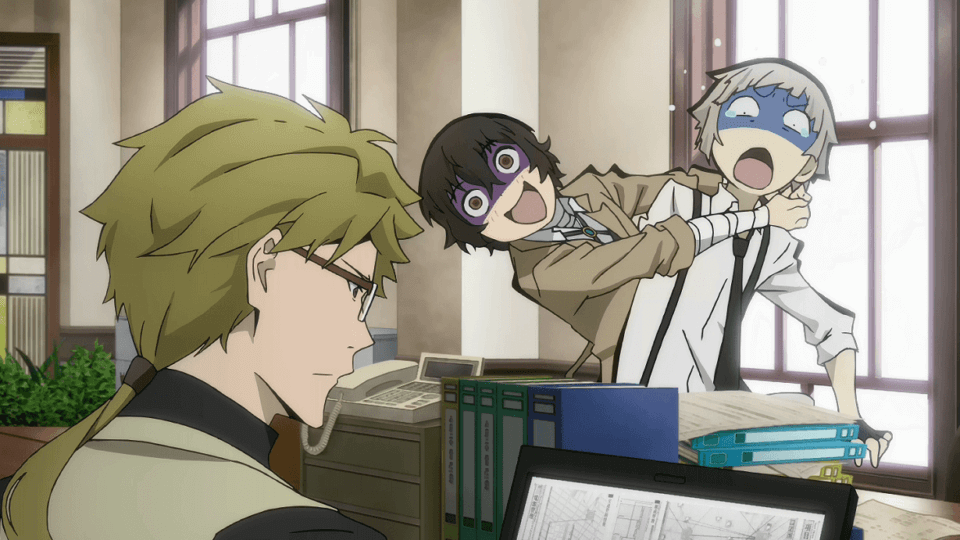 My second issue was that the season seemed to be a good 12 episode set up for something bigger to come. It was good taking the time to get to know the characters and get time to learn their respective abilities but I would have loved a more defined goal for the season. I liked that the episodes structure of solving smaller mysteries over a single or couple of episodes while introducing a new character from the agency but by the end of the 12 episodes it felt like the person that may be the shows main villain had only just been revealed.

The home release set includes all 12 episodes from the first season and they’re available to be watched either fully dubbed in English or in Japanese with English subtitles. The set includes both the Blu-Ray and DVD versions of the series so although 4 discs are included inside the pack, you only need to find the 2 that suit your watch style.

Also included are a handful of extra features. While they’re nothing mind blowing I always enjoy jumping in to see what else is on offer once I finish the episodes in a collection. Here you’ll be able to check out a few promotional video’s for the series, commercials as well as clean, textless versions of the show’s opening and closing theme songs. 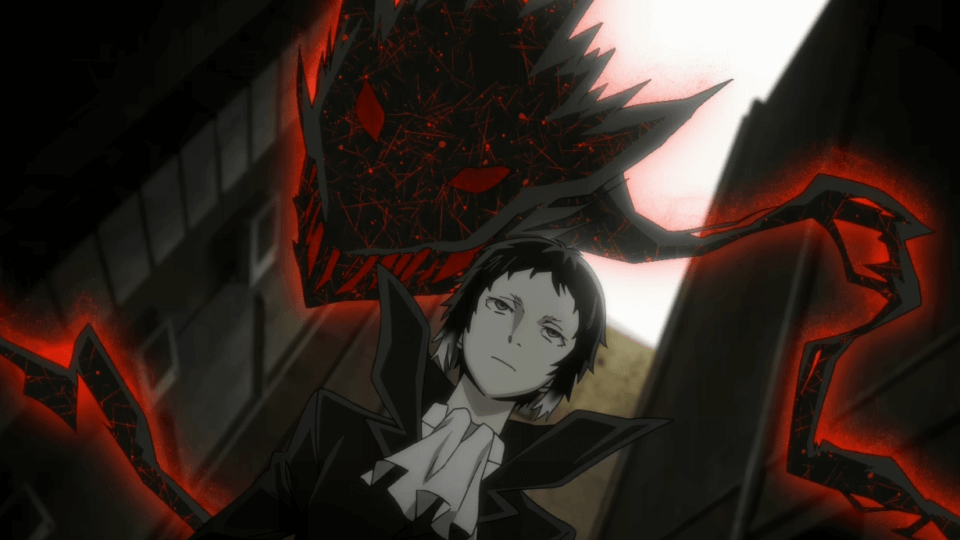 All in all Bungo Stray Dogs is a solid series that is carried by the entertaining dynamic between it’s core cast of quirky characters in the Armed Detective Agency. The season flows from start to end thanks to short and engaging story arcs but does end right as it feels like the bigger picture is starting to present itself. Studio Bones have some of their best work here when it comes to the overall presentation of the show and it definitely has me keen to jump into the season 2 collection to see where things go next.